This chapter describes several network deployment scenarios, provides information about how to deploy the Cisco Identity Services Engine (ISE) SNS 3400 Series appliance and its related components, and provides a pointer to the switch and Wireless LAN Controller configurations that are needed to support Cisco ISE. This chapter contains the following sections:

Cisco ISE node—A Cisco ISE node can assume any or all of the following personas: Administration, Policy Service, or Monitoring 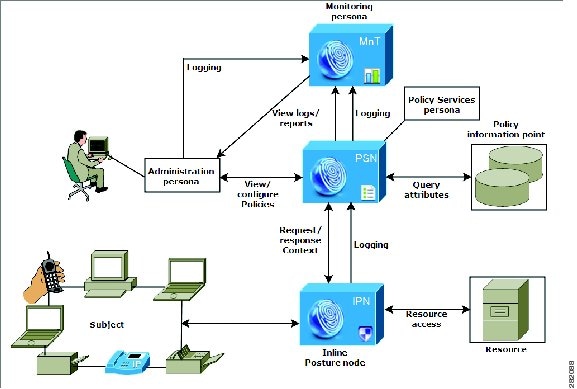 In a Cisco ISE distributed deployment, there are two types of nodes:

A Cisco ISE node can provide various services based on the persona that it assumes. Each node in a deployment, with the exception of the Inline Posture node, can assume the Administration, Policy Service, and Monitoring personas. In a distributed deployment, you can have the following combination of nodes on your network:

A Cisco ISE node with the Policy Service persona provides network access, posture, guest access, client provisioning, and profiling services. This persona evaluates the policies and provides network access to endpoints based on the result of the policy evaluation. You can have more than one node assume this persona. Typically, there is more than one Policy Service node in a distributed deployment. All Policy Service nodes that reside behind a load balancer share a common multicast address and can be grouped to form a node group. If one of the nodes in a node group goes down, the other nodes detect the failure and reset any pending sessions.

At least one node in your distributed setup should assume the Policy Service persona.

An Inline Posture node is a gatekeeping node that is positioned behind network access devices such as wireless LAN controllers (WLCs) and VPN concentrators on the network. Inline Posture enforces access policies after a user has been authenticated and granted access, and handles change of authorization (CoA) requests that a WLC or VPN is unable to accommodate. Cisco ISE allows you to have two Inline Posture nodes, and they can take on primary or secondary roles for high availability.

You must download the Inline Posture ISO image from Cisco.com and install it on any of the supported platforms, configure certificates through the CLI, and register this node from the user interface of the primary Administration node.

You cannot access the web-based user interface of the Inline Posture nodes. You can configure them only from the primary Administration node.

Before you can add an Inline Posture node to a deployment, you must configure a certificate for it and register it with the primary Administration node. See Configuring Certificates for Inline Posture Nodes for more information.

A deployment that has a single Cisco ISE node is called a standalone deployment. This node runs the Administration, Policy Service, and Monitoring personas.

The smallest Cisco ISE deployment consists of two Cisco ISE nodes as shown in Figure 1-2, with one Cisco ISE node functioning as the primary appliance in a small network.

As the number of devices, network resources, users, and AAA clients increases in your network environment, you should change your deployment configuration from the basic small model and use more of a split or distributed deployment model, as shown in Figure 1-3.

In split Cisco ISE deployments, you continue to maintain primary and secondary nodes as described in a small Cisco ISE deployment. However, the AAA load is split between the two Cisco ISE nodes to optimize the AAA workflow. Each Cisco ISE appliance (primary or secondary) needs to be able to handle the full workload if there are any problems with AAA connectivity. Neither the primary node nor the secondary nodes handles all AAA requests during normal network operations because this workload is distributed between the two nodes.

The ability to split the load in this way directly reduces the stress on each Cisco ISE node in the system. In addition, splitting the load provides better loading while the functional status of the secondary node is maintained during the course of normal network operations.

In split Cisco ISE deployments, each node can perform its own specific operations, such as network admission or device administration, and still perform all the AAA functions in the event of a failure. If you have two Cisco ISE nodes that process authentication requests and collect accounting data from AAA clients, we recommend that you set up one of the Cisco ISE nodes to act as a log collector. Figure 1-3 shows the secondary Cisco ISE node in this role.

In addition, the split Cisco ISE node deployment design provides an advantage because it also allows for growth, as shown in Figure 1-4.

As the amount of log traffic increases in a network, you can choose to dedicate one or two of the secondary Cisco ISE nodes for log collection in your network.

Because syslog messages are generated for outbound log traffic, any RFC 3164-compliant syslog appliance can serve as the collector for outbound logging traffic. A dedicated logging server enables you to use the reports and alert features that are available in Cisco ISE to support all the Cisco ISE nodes. See “Cisco ISE Setup Program Parameters” section when configuring the Cisco ISE software to support a dedicated logging server.

In large centralized networks, you should use a load balancer (as shown in Figure 1-5), which simplifies the deployment of AAA clients. Using a load balancer requires only a single entry for the AAA servers, and the load balancer optimizes the routing of AAA requests to the available servers.

Dispersed Cisco ISE network deployments are most useful for organizations that have a main campus with regional, national, or satellite locations elsewhere. The main campus is where the primary network resides, is connected to additional LANs, ranges in size from small to large, and supports appliances and users in different geographical regions and locations.

Large remote sites can have their own AAA infrastructure (as shown in Figure 1-6) for optimal AAA performance. A centralized management model helps maintain a consistent, synchronized AAA policy. A centralized configuration model uses a primary Cisco ISE node with secondary Cisco ISE nodes. We still recommend that you use a separate Monitoring persona on the Cisco ISE node, but each remote location should retain its own unique network requirements.

Before You Plan a Network with Several Remote Sites

Table 1-2 provides guidance on the type of appliance that you would need for a dedicated Policy Service node based on the number of active endpoints the node services.

Table 1-3 provides the maximum throughput and the maximum number of endpoints that a single Inline Posture node can support.

A network or system architect is responsible for researching the issues involved in Inline Posture deployment to determine what best suits network requirements.

A network or system architect must address the following basic questions when planning to deploy Inline Posture nodes:

To ensure that Cisco ISE can interoperate with network switches and that functions from Cisco ISE are successful across the network segment, you must configure your network switches with certain required Network Time Protocol (NTP), RADIUS/AAA, IEEE 802.1X, MAC Authentication Bypass (MAB), and other settings.