Traditional network segmentation has been provided by VLANs that are standardized under the IEEE 802.1Q group. VLANs provide logical segmentation of Layer 2 boundaries or broadcast domains. However, due to the inefficient use of available network links with VLAN use, rigid requirements on device placements in the data center network, and the limited scalability to a maximum 4094 VLANs, using VLANs has become a limiting factor to IT departments and cloud providers as they build large multitenant data centers.

Cisco, in partnership with other leading vendors, proposed the Virtual Extensible LAN (VXLAN) standard to the IETF as a solution to the data center network challenges posed by traditional VLAN technology. The VXLAN standard provides for the elastic workload placement and higher scalability of Layer2 segmentation that is required by today’s application demands.

As its name indicates, VXLAN is designed to provide the same Ethernet Layer 2 network services as VLAN does today, but with greater extensibility and flexibility. Compared to VLAN, VXLAN offers the following benefits:

●   Flexible placement of multitenant segments throughout the data center: It provides a solution to extend Layer 2 segments over the underlying shared network infrastructure so that tenant workload can be placed across physical pods in the data center.

●   Higher scalability to address more Layer 2 segments: VLANs use a 12-bit VLAN ID to address Layer 2 segments, which results in limiting scalability of only 4094 VLANs. VXLAN uses a 24-bit segment ID known as the VXLAN network identifier (VNID), which enables up to 16 million VXLAN segments to coexist in the same administrative domain.

●   Better utilization of available network paths in the underlying infrastructure: VLAN uses the Spanning Tree Protocol for loop prevention, which ends up not using half of the network links in a network by blocking redundant paths. In contrast, VXLAN packets are transferred through the underlying network based on its Layer 3 header and can take complete advantage of Layer 3 routing, equal-cost multipath (ECMP) routing, and link aggregation protocols to use all available paths.

VXLAN is a Layer 2 overlay scheme over a Layer 3 network. It uses MAC Address-in-User Datagram Protocol (MAC-in-UDP) encapsulation to provide a means to extend Layer 2 segments across the data center network. VXLAN is a solution to support a flexible, large-scale multitenant environment over a shared common physical infrastructure. The transport protocol over the physical data center network is IP plus UDP.

As shown in Figure 1, VXLAN introduces an 8-byte VXLAN header that consists of a 24-bit VNID and a few reserved bits. The VXLAN header together with the original Ethernet frame goes in the UDP payload. The 24-bit VNID is used to identify Layer 2 segments and to maintain Layer 2 isolation between the segments. With all 24 bits in VNID, VXLAN can support 16 million LAN segments.

VXLAN uses VXLAN tunnel endpoint (VTEP) devices to map tenants’ end devices to VXLAN segments and to perform VXLAN encapsulation and de-encapsulation. Each VTEP function has two interfaces: One is a switch interface on the local LAN segment to support local endpoint communication through bridging, and the other is an IP interface to the transport IP network.

The IP interface has a unique IP address that identifies the VTEP device on the transport IP network known as the infrastructure VLAN. The VTEP device uses this IP address to encapsulate Ethernet frames and transmits the encapsulated packets to the transport network through the IP interface. A VTEP device also discovers the remote VTEPs for its VXLAN segments and learns remote MAC Address-to-VTEP mappings through its IP interface. The functional components of VTEPs and the logical topology that is created for Layer 2 connectivity across the transport IP network is shown in Figure 2. 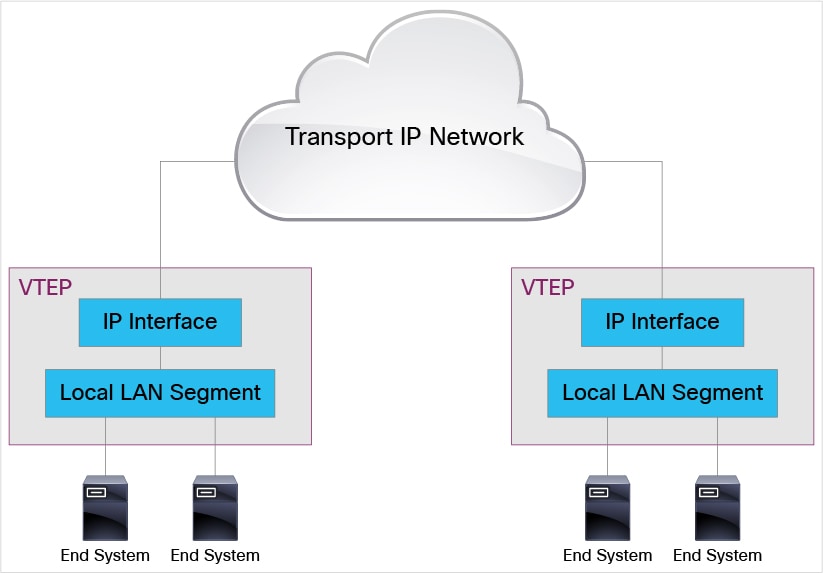 VXLAN uses stateless tunnels between VTEPs to transmit traffic of the overlay Layer 2 network through the Layer 3 transport network. An example of a VXLAN packet forwarding flow is shown in Figure 3. 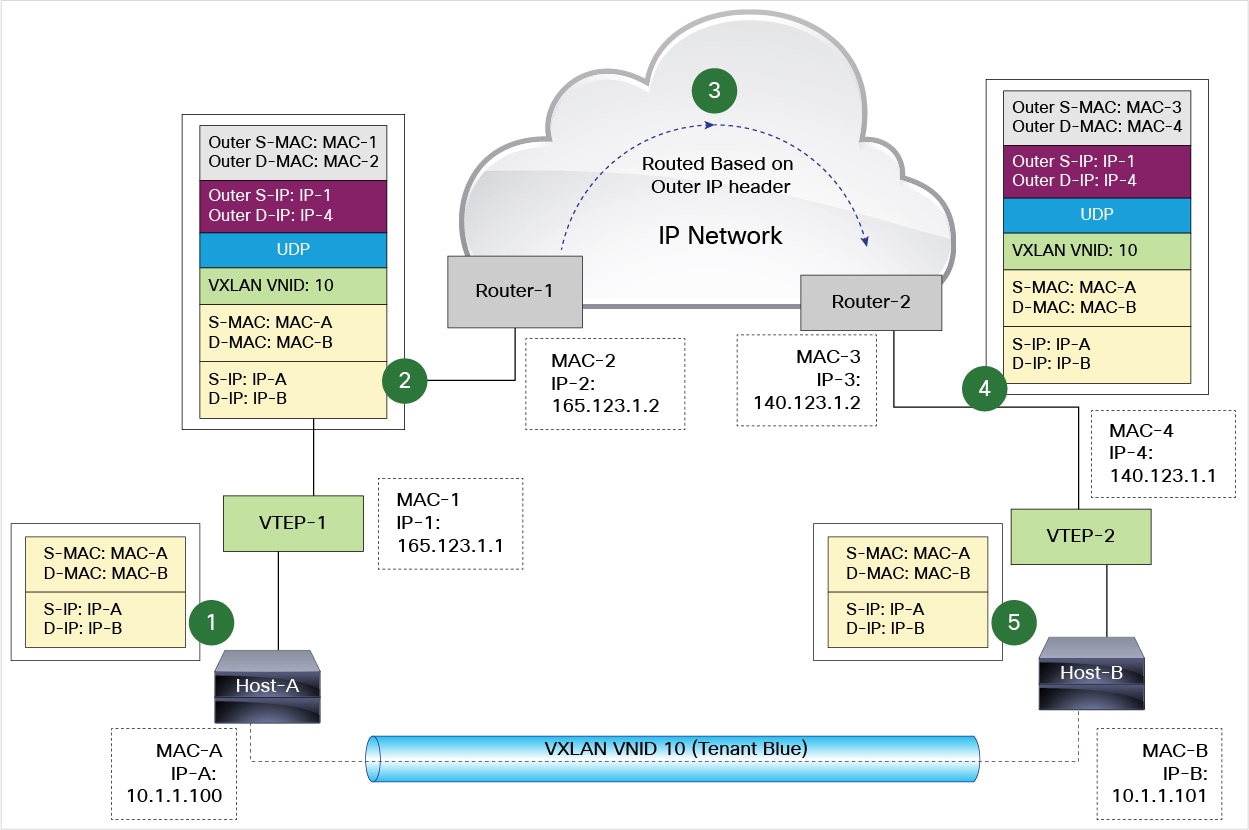 In Figure 3, Host-A and Host-B in VXLAN segment 10 communicate with each other through the VXLAN tunnel between VTEP-1 and VTEP-2. This example assumes that address learning has been done on both sides, and corresponding MAC-to-VTEP mappings exist on both VTEPs.

The packets are routed toward VTEP-2 through the transport network based on their outer IP address header, which has the IP address of VTEP-2 as the destination address. After VTEP-2 receives the packets, it strips off the outer Ethernet, IP, UDP, and VXLAN headers, and forwards the packets to Host-B, based on the original destination MAC address in the Ethernet frame.

For these traffic types, IP multicast is used to reduce the flooding scope of the set of hosts that are participating in the VXLAN segment. 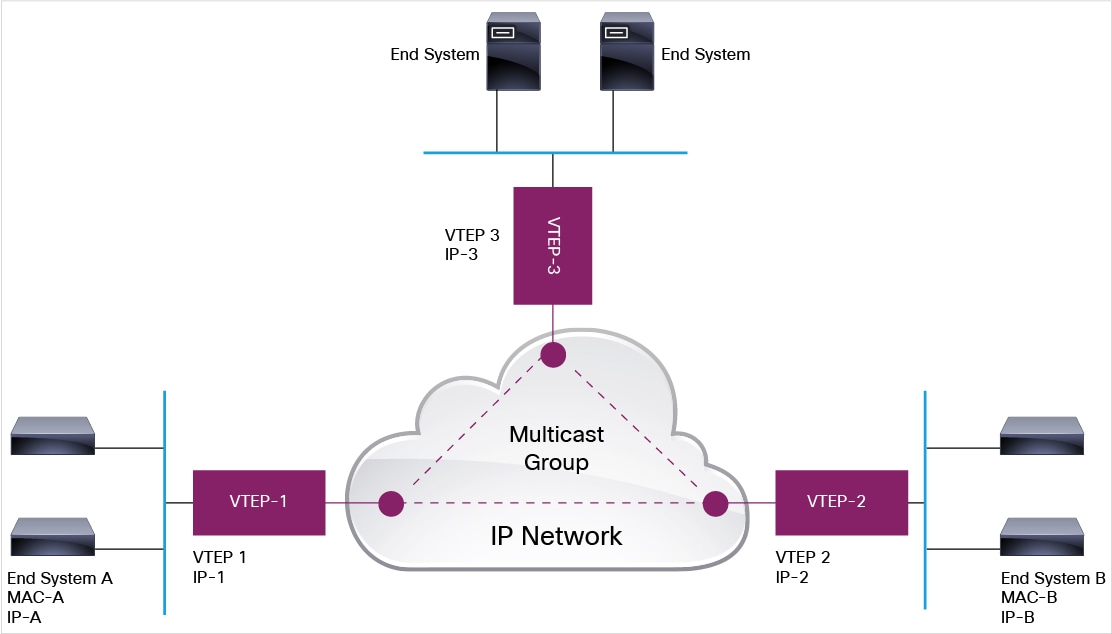 The Cisco Nexus 9000 VXLAN implementation uses the classic Layer 2 data plane flooding and learning mechanisms for remote VTEP discovery and tenant address learning. The network in Figure 4 is an example that shows the learning process.

The tenant VXLAN segment has VNID 10 and uses the multicast group 239.1.1.1 over the transport network. It has three participating VTEPs in the data center. Assume that no address learning has been performed between locations. End System A (with IP-A, MAC-A) starts IP communication with End System B (with IP-B, MAC-B). The sequence of steps is shown in Figure 5. 1.     End System A sends out an Address Resolution Protocol (ARP) request for IP-B on its Layer 2 VXLAN network.

They de-encapsulate the packet and check its VNID in the VXLAN header. If it matches their configured VXLAN segment VNID, they forward the ARP request to their local VXLAN network. They also learn the IP address of VTEP-1 from the outer IP address header and inspect the packet to learn the MAC address of End System A, placing this mapping in the local table.

4.     End System B receives the ARP request forwarded by VTEP-2. It responds with its own MAC address (MAC‑B), and learns the IP-A-to-MAC-A mapping.

6.     VTEP-1 receives the encapsulated ARP reply from VTEP-2. It de-encapsulates and forwards the ARP reply to End System A. It also learns the IP address of VTEP-2 from the outer IP address header and inspects the original packet to learn MAC-B-to-IP-2 mapping.

7.     Subsequent IP packets between End Systems A and B are unicast forwarded, based on the mapping information on VTEP-1 and VTEP-2, using the VXLAN tunnel between them.

8.     VTEP-1 can optionally perform proxy ARPs for subsequent ARP requests for IP-B to reduce the flooding over the transport network.

Encapsulated VXLAN packets are forwarded between VTEPs based on the native forwarding decisions of the transport network. Most of the data center transport networks are designed and deployed with multiple redundant paths and take advantage of various multipath load-sharing technologies to distribute traffic loads on all available paths. It is desirable to share the load of the VXLAN traffic in the same fashion in the transport network.

A typical VXLAN transport network is an IP-routing network that uses the standard IP ECMP to balance the traffic load among multiple best paths. To avoid out-of-sequence packet forwarding, flow-based ECMP is commonly deployed. An ECMP flow is defined by the source and destination IP addresses and optionally the source and destination TCP or UDP ports in the IP packet header.

Because all the VXLAN packet flows between a pair of VTEPs have the same outer source and destination IP addresses, and all VTEP devices must use one identical destination UDP port that can be either the Internet Allocated Numbers Authority (IANA)-allocated UDP port 4789 or a customer-configured port, the only variable element in the ECMP flow definition that can differentiate VXLAN flows from the transport network standpoint is the source UDP port. A similar situation for Link Aggregation Control Protocol (LACP) hashing occurs if the resolved egress interface based on the routing and ECMP decision is an LACP port channel. The LACP uses the VXLAN outer-packet header for link load-share hashing, which results in the source UDP port being the only element that can uniquely identify a VXLAN flow.

Cisco Nexus 9000 Series Switches implement VXLAN in the way that a hash of the inner frame’s header is used as the VXLAN source UDP port. As a result, a VXLAN flow can be unique, with the IP addresses and UDP ports combination in its outer header while traversing the underlay transport network. Therefore, the hashed source UDP port introduces a desirable level of entropy for ECMP and LACP load balancing.

VXLAN is a new technology for virtual data center overlays and is being adopted in data center networks more and more, especially for virtual networking in the hypervisor for virtual machine-to-virtual machine communication. However, data centers are likely to contain devices that are not capable of supporting VXLAN, such as legacy hypervisors, physical servers, and network services appliances, such as physical firewalls and load balancers, and storage devices, etc. Those devices need to continue to reside on classic VLAN segments. It is not uncommon that virtual machines in a VXLAN segment need to access services provided by devices in a classic VLAN segment. This type of VXLAN-to-VLAN connectivity is enabled by using a VXLAN gateway. 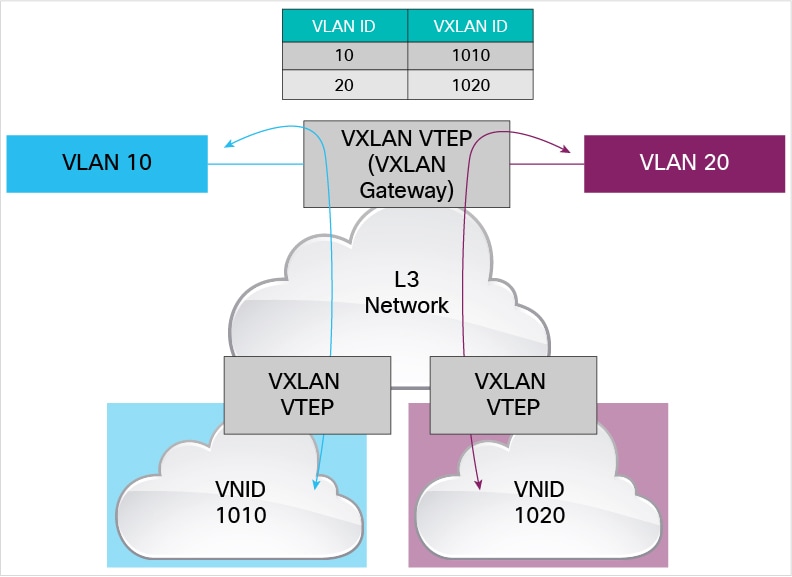 MTU Size in the Transport Network

ECMP and LACP Hashing Algorithms in the Transport Network

As described in a previous section, Cisco Nexus 9000 Series Switches introduce a level of entropy in the source UDP port for ECMP and LACP hashing in the transport network. As a way to augment this implementation, the transport network uses an ECMP or LACP hashing algorithm that takes the UDP source port as an input for hashing, which achieves the best load-sharing results for VXLAN encapsulated traffic.

VXLAN can support up to 16 million logical Layer 2 segments, using the 24-bit VNID field in the header. With one-to-one mapping between VXLAN segments and IP multicast groups, an increase in the number of VXLAN segments causes a parallel increase in the required multicast address space and the amount of forwarding states on the core network devices. At some point, multicast scalability in the transport network can become a concern. In this case, mapping multiple VXLAN segments to a single multicast group can help conserve multicast control plane resources on the core devices and achieve the desired VXLAN scalability. However, this mapping comes at the cost of suboptimal multicast forwarding. Packets forwarded to the multicast group for one tenant are now sent to the VTEPs of other tenants that are sharing the same multicast group. This causes inefficient utilization of multicast data plane resources. Therefore, this solution is a trade-off between control plane scalability and data plane efficiency.

Despite the suboptimal multicast replication and forwarding, having multiple-tenant VXLAN networks to share a multicast group does not bring any implications to the Layer 2 isolation between the tenant networks. After receiving an encapsulated packet from the multicast group, a VTEP checks and validates the VNID in the VXLAN header of the packet. The VTEP discards the packet if the VNID is unknown to it. Only when the VNID matches one of the VTEP’s local VXLAN VNIDs, does it forward the packet to that VXLAN segment. Other tenant networks will not receive the packet. Thus, the segregation between VXLAN segments is not compromised.

VXLAN provides a solution to extend Layer 2 networks across Layer 3 infrastructure by way of MAC-in-UDP encapsulation and tunneling. VXLAN enables flexible workload placements by way of the Layer 2 extension. It is also an approach to building a multitenant data center by decoupling tenant Layer 2 segments from the shared transport network.