For complete syntax and usage information for the commands used in this chapter, refer to the Cisco 7600 Series Routers Command References at this URL:

The tasks in this chapter assume that you have already configured cache engines on your network. For specific information on hardware and network planning associated with Cisco Cache Engines and WCCP, see the Product Literature and Documentation links available on the Cisco.com Web Scaling site.

The Web Cache Communication Protocol (WCCP) is a Cisco-developed content-routing technology that allows you to integrate cache engines (such as the Cisco Cache Engine 550) into your network infrastructure.

WCCP enables Cisco IOS routing platforms to transparently redirect content requests. The main benefit of transparent redirection is that users need not configure their browsers to use a web proxy. Instead, they can use the target URL to request content, and have their requests automatically redirected to a cache engine. The word “transparent” is this case means that the end user does not know that a requested file (such as a web page) came from the cache engine instead of from the originally specified server.

WCCP enables a series of cache engines, called a cache engine cluster, to provide content to a router or multiple routers. Network administrators can easily scale their cache engines to handle heavy traffic loads through these clustering capabilities. Cisco clustering technology enables each cache member to work in parallel, resulting in linear scalability. Clustering cache engines greatly improves the scalability, redundancy, and availability of your caching solution. You can cluster up to 32 cache engines to scale to your desired capacity.

With WCCP-Version 1, only a single router services a cluster. In this scenario, this router is the device that performs all the IP packet redirection. Figure 60-1 illustrates how this configuration appears. 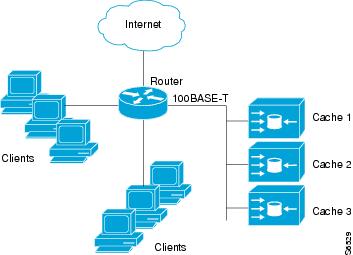 Content is not duplicated on the cache engines. The benefit of using multiple caches is that you can scale a caching solution by clustering multiple physical caches to appear as one logical cache.

The following sequence of events details how WCCPv1 configuration works:

The cache engines send their IP addresses to the control router using WCCP, indicating their presence. Routers and cache engines communicate to each other via a control channel; this channel is based on UDP port 2048.

This information is used by the control router to create a cluster view (a list of caches in the cluster). This view is sent to each cache in the cluster, essentially making all the cache engines aware of each other. A stable view is established after the membership of the cluster remains the same for a certain amount of time.

Multiple routers can use WCCPv2 to service a cache cluster. This is in contrast to WCCPv1 in which only one router could redirect content requests to a cluster. Figure 60-2 illustrates a sample configuration using multiple routers.

The subset of cache engines within a cluster and routers connected to the cluster that are running the same service is known as a service group. Available services include TCP and User Datagram Protocol (UDP) redirection.

The multicast option is easier to configure because you need only specify a single address on each cache engine. This option also allows you to add and remove routers from a service group dynamically, without needing to reconfigure the cache engines with a different list of addresses each time.

Each cache engine is configured with a list of routers.

Each cache engine announces its presence and a list of all routers with which it has established communications. The routers reply with their view (list) of cache engines in the group.

Once the view is consistent across all cache engines in the cluster, one cache engine is designated as the lead and sets the policy that the routers need to deploy in redirecting packets.

The following sections describe how to configure WCCPv2 on routers so they may participate in a service group.

To accommodate the various types of services available, WCCPv2 introduces the concept of multiple service groups. Service information is specified in the WCCP configuration commands using dynamic services identification numbers (such as “98”) or a predefined service keywords (such as “web-cache”). This information is used to validate that service group members are all using or providing the same service.

The cache engines in service group specify traffic to be redirected by protocol (TCP or UDP) and port (source or destination). Each service group has a priority status assigned to it. Packets are matched against service groups in priority order.

WCCPv2 allows multiple routers to be attached to a cluster of cache engines. The use of multiple routers in a service group allows for redundancy, interface aggregation, and distribution of the redirection load.

Typical reasons why a cache engine would reject packets and initiate the packet return feature include the following:

WCCPv2 can be used to adjust the load being offered to individual cache engines to provide an effective use of the available resources while helping to ensure high quality of service (QoS) to the clients. WCCPv2 allows the designated cache to adjust the load on a particular cache and balance the load across the caches in a cluster. WCCPv2 uses three techniques to perform load distribution:

By using these hashing parameters, you can prevent one cache from being overloaded and reduce the potential for congestion.

These sections describe how to configure WCCP:

Specifying a Version of WCCP

Until you configure a WCCP service using the ip wccp { web-cache | service-number } global configuration command, WCCP is disabled on the router. The first use of a form of the ip wccp command enables WCCP. By default WCCPv2 is used for services, but you can use WCCPv1 functionality instead. To change the running version of WCCP from Version 2 to Version 1, or to return to WCCPv2 after an initial change, perform this task in EXEC mode:

WCCPv1 does not use the WCCP commands from earlier Cisco IOS versions. Instead, use the WCCP commands documented in this chapter. If a function is not allowed in WCCPv1, an error prompt will be printed to the screen. For example, if WCCPv1 is running on the router and you try to configure a dynamic service, the following message will be displayed: “WCCP V1 only supports the web-cache service.” The show ip wccp EXEC command will display the WCCP protocol version number that is currently running on your router.

WCCPv2 uses service groups based on logical redirection services, deployed for intercepting and redirecting traffic. The standard service is web cache, which intercepts TCP port 80 (HTTP) traffic and redirects that traffic to the cache engines. This service is referred to as a well-known service, because the characteristics of the web cache service are known by both the router and cache engines. A description of a well-known service is not required beyond a service identification (in this case, the command line interface (CLI) provides a web-cache keyword in the command syntax).

In addition to the web cache service, there can be up to seven dynamic services running concurrently in a service group.

The dynamic services are defined by the cache engines; the cache instructs the router which protocol or ports to intercept, and how to distribute the traffic. The router itself does not have information on the characteristics of the dynamic service group’s traffic, because this information is provided by the first web cache to join the group. In a dynamic service, up to eight ports can be specified within a single protocol.

Cisco Cache Engines, for example, use dynamic service 99 to specify a reverse-proxy service. However, other cache devices may use this service number for some other service. The following configuration information deals with enabling general services on Cisco routers. Refer to the cache server documentation for information on configuring services on cache devices.

To enable a service on a Cisco 7600 series router, perform this task:

As indicated by the out and in keyword options in the ip wccp service redirect command, redirection can be specified for outbound interfaces or inbound interfaces.

To configure a web-cache service, perform this task:

Excluding Traffic on a Specific Interface from Redirection

To exclude any interface from redirecting inbound traffic, perform this task in global configuration mode:

Registering a Router to a Multicast Address

To configure the router to use an access list to determine which traffic should be directed to which cache engines, perform this task in global configuration mode:

To disable caching for certain clients, perform this task in global configuration mode:

Setting a Password for a Router and Cache Engines

To configure an MD5 password for use by the router in WCCP communications, perform this task in global configuration mode:

To verify and monitor the configuration settings for WCCP, use the following commands in EXEC mode:

Changing the Version of WCCP on a Router Example

The following example shows the process of changing the WCCP version from the default of WCCPv2 to WCCPv1, and enabling the web-cache service in WCCPv1:

The following example shows a configuration session in which redirection of HTTP traffic arriving on VLAN interface 30 is enabled:

The following example assumes you a configuring a service group using Cisco Cache Engines, which use dynamic service 99 to run a reverse proxy service:

Registering a Router to a Multicast Address Example

The following example shows how to register a router to a multicast address of 224.1.1.100:

The following example shows a router configured to run a reverse proxy service, using the multicast address of 224.1.1.1. Redirection applies to packets outgoing through VLAN interface 60:

To disable caching for certain clients, servers, or client/server pairs, you can use WCCP access lists. The following example shows that any requests coming from 10.1.1.1 to 12.1.1.1 will bypass the cache and that all other requests will be serviced normally:

The following example configures a router to redirect web-related packets received through VLAN interface 70, destined to any host except 209.165.196.51:

Setting a Password for a Router and Cache Engines Example

To verify your configuration changes, use the more system:running-config EXEC command. The following example shows that the both the web cache service and dynamic service 99 are enabled on the router:

Virtual Routing and Forwarding (VRF) is an IP technology that allows multiple instances of a routing table to coexist on the same router at the same time. Before Cisco IOS 15.1(3)S, VRF was not supported as a part of Web Cache Communication Protocol (WCCP). Service groups that defines the nature of the traffic for redirection were configured globally. The VRF support on WCCP enhances the existing WCCP protocol by allowing implementing support for VRF and allows you to configure service groups for each VRF. Both the service identifier and the VRF identifier of WCCP protocol packets are used to associate cache engines with a configured service group.

Complete these steps to configure VRF support on WCCP.

This example shows how to configure a web-cache service on an interface with VRF.

This example shows how to configure a web-cache service on an interface with VRF and ACL configured.

Use the show ip wccp summary command to display the summary of all WCCP services including VRF specific WCCP configuration.

This example shows how to configure web-cache service on an interface with IPv6 address.

Use these commands to verify the WCCPv2 IPv6 support feature.

This is a sample output of the show ipv6 wccp capabilities command.