The TE Topology tool provides a graphical view of the network set up through the Cisco Prime Fulfillment web client. It gives a graphical representation of the various network elements, including devices, links, and tunnels. It also displays devices that Prime Fulfillment is unable to identify but which have been discovered with the TE Discovery tool to be part of the network.

This chapter describes how to use the topology tool.

The TE Topology tool is accessed from the Traffic Engineering menu.

The TE Topology tool is used to visualize the TE network based on the data contained in the repository. To that end, it provides a number of ways of manipulating the display, for example by applying algorithms to the graph layout, importing maps, and so on.

The tool is accessed from a TE Topology Interface Applet that displays the TE topology through a Java applet within the browser.

The features offered through the Topology Applet are:

To access the Topology Applet, use the following steps:

If the security certificate for the topology applet has not been accepted previously, you might get a security warning window.

Click Yes or Always to accept the authenticity of the security certificate. 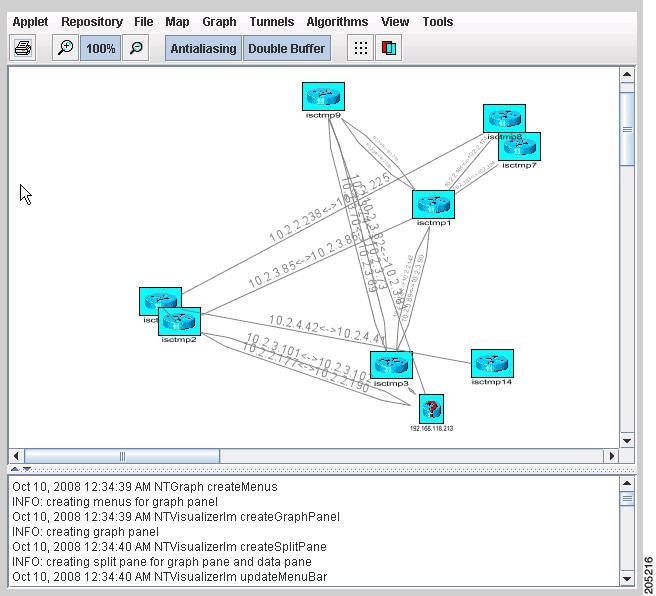 After the nodes have been arranged to your liking, you might end up with a topology display similar to the one in Figure 43-2. 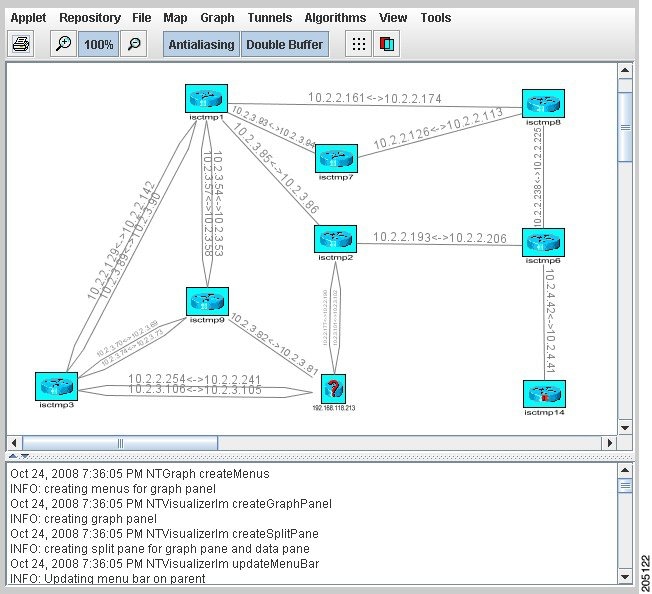 Use the two operations in the Repository menu, Layout Graph and Save Graph Layout, to display or save the current layout of the network graph.

Prior to generating the graph layout, the coordinates must be set on each of the network devices. Otherwise, the graph will have a random layout.

Layout Graph—The graph is laid out from the repository. If a graph layout is already present, that layout is cleared once you click Yes in the Clear Graph Layout confirmation box. If the layout has not previously been saved, a random layout of the repository contents is drawn. If it has been saved previously, the saved layout is redrawn.

Save Graph Layout—Save the current graph layout. Doing so will ensure that whenever the graph layout is cleared with Layout Graph or the topology applet is closed, the same layout will be created when the applet is restarted. If a map was used, the map is also redrawn.

You can associate a map with each view. Currently, the topology viewer only supports maps in the Environmental Systems Research Institute, Inc. (ESRI) shape format. The following sections describe how to load maps and selectively view map layers and data associated with each map.

The map features are accessed from the Map menu in the Topology window.

To access the Map menu, use the following steps:

If link and node data for your network is already in the repository, a Progress Report lists the various network elements as the corresponding data is loaded.

From the Map menu, you can either load or clear (remove) maps as described in the following.

You might want to set a background map showing the physical locations of the displayed devices. To load a map, use the following steps:

Make your selections in the Map Chooser window.

The right-hand side of the window contains a small control panel, which allows you to select the projection in which a map is shown. A map projection is a projection which maps a sphere onto a plane. Typical projections are Mercator, Lambert, and Stereographic.

For more information on projections, consult the Map Projections section of Eric Weisstein's World of Mathematics at:

If desired, make changes to the settings in the Longitude Range and Latitude Range fields.

Select a map file and click Open to load the map.

Selecting the map file and clicking the Open button starts loading it. Maps can consist of several components and thus a progress dialog is shown informing you which part of the map file is loaded.

A map similar to the one in Figure 43-3 appears. 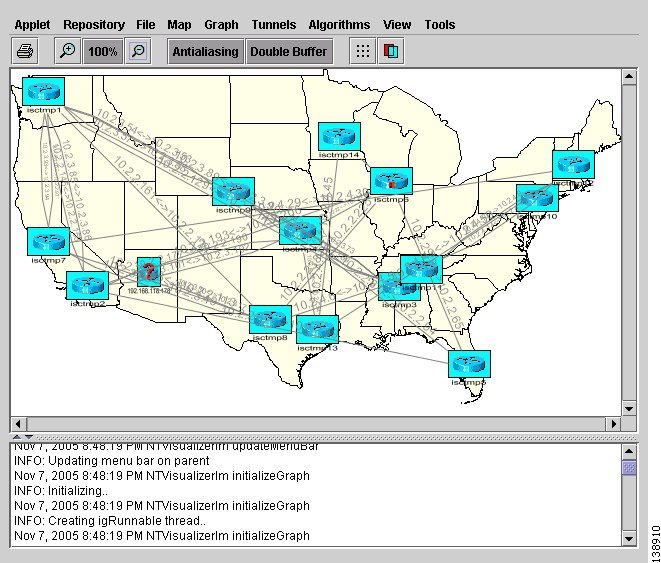 Use the various functions in the menus of the Topology Display window to manipulate the display contents in the Topology view. Some of these are described in subsequent sections.

You might need to add your own maps to the selection of maps available to the Topology Tool. This is done by placing a map file in the $ISC_HOME/resources/webserver/tomcat/webapps/ipsc-maps/data directory or a subdirectory thereof within the Prime Fulfillment installation. To make this example more accessible, assume that you wish to add a map of Toowong, a suburb of Brisbane, the capital of Queensland. The first step to do so is to obtain maps from a map vendor. All maps must be in the ESRI shape file format (see ESRI shapefile technical description). In addition, a data file can accompany each shape file. Data files contain information about objects and the corresponding shapes are contained within the shape file. Let us assume that the vendor provided four files:

We have to create a .map file that informs the TE Topology tool about layers of the map. In this case we have two layers: a city and a street layer. The map file, say, Toowong.map, would thus have the following contents:

It lists all layers that create a map of Toowong. The order is important, as the first file forms the background layer, with other layers placed on top of the preceding layers.

Having obtained shape and data files and having written the map file, place all five files in the $ISC_HOME/resources/webserver/tomcat/webapps/ipsc-maps/data directory. All map files must be located in this folder. After this is done, the map is automatically accessible to the topology viewer.

Use this feature to clear (remove) the active map to leave only nodes and links in the corresponding network.

The Graph menu provides access to a range of tools to manage and manipulate graphs.

Use the JavaServer Pages to look at the list of nodes, links, and tunnels. From the JSP pages, select the display button at the bottom of the window to highlight elements.

The tools in the Graph menu serve to modify the appearance of the topology.

These are described in the following sections.

Clear Highlighting serves to remove highlighting from specific elements as listed in its submenus.

When you select Attributes from the Graph menu, the Graphic Attributes window in Figure 43-4 appears. 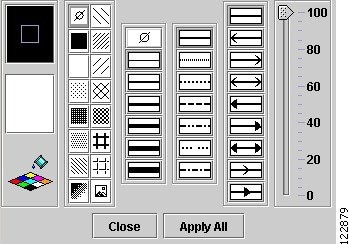 The Add/Modify Attributes tool is used as follows:

Use Ctrl/Shift to select multiple elements.

Only selected links (Step 1) are affected.

Use the Clear function in the Graph menu to remove the topology graph from the current view.

Although this is also achieved with Layout Graph in the Repository menu, Layout Graph re-creates the graph last saved in the repository in addition to clearing the graph.

AntiAlias, found in the Graph menu, is used to create smoother lines and a more pleasant appearance at the expense of performance.

BackingStore allows graphics content to be automatically saved when moved to the background and regenerated when returned to the foreground. This helps avoid superfluous refreshing.

DoubleBuffer enables double buffering for dragging elements on the graph.

In the Algorithms menu various algorithms can be used to enhance and otherwise alter the graph layout.

The algorithms only work when the nodes are interconnected with links.

Randomize rearranges the nodes in the current topology layout at random.

If there are overlapping links, the layout can be optimized by selecting Optimize Links.

The spring settings are used to enhance the appearance of the topology display according to user preferences. When selecting Spring Settings, the Spring Settings window appears.