Within an autonomous system, routing information is shared using an IGP.

Inter-autonomous system configurations supported in an MPLS VPN can include:

Allows a VPN to cross more than one service provider backbone

Allows a VPN to exist in different areas

The inter-autonomous systems for MPLS VPNs feature allows a service provider to create a VPN in different geographic areas. Having all VPN traffic flow through one point (between the areas) allows for better rate control of network traffic between the areas. 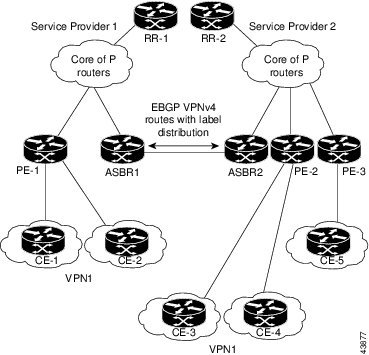 This configuration uses the following process to transmit information:

The provider edge router (PE-1) assigns a label for a route before distributing that route. The PE router uses the multiprotocol extensions of a Border Gateway Protocol (BGP) to transmit label mapping information. The PE router distributes the route as a VPN-IPv4 address. The address label and the VPN identifier are encoded as part of the NLRI.

The eBGP border edge router (ASBR1) redistributes the route to the next autonomous system, (ASBR2). ASBR1 specifies its own address as the value of the eBGP next hop attribute and assigns a new label. The ASBR1 address ensures the following:

The next hop router is always reachable in the service provider (P) backbone network.

The eBGP border edge router (ASBR2) redistributes the route in one of the following ways, depending on its configuration:

If the iBGP neighbors are configured with the neighbor next-hop-self command, ASBR2 changes the next hop address of updates received from the eBGP peer, then forwards it on.

If the iBGP neighbors are not configured with the neighbor next-hop-self command, the next hop address does not get changed. ASBR2 must propagate a host route for the eBGP peer through the IGP.

The next hop field associated with the distributing router

An RD1: route distinguisher is part of a destination network address to make the VPN-IPv4 route globally unique in the VPN service provider environment. 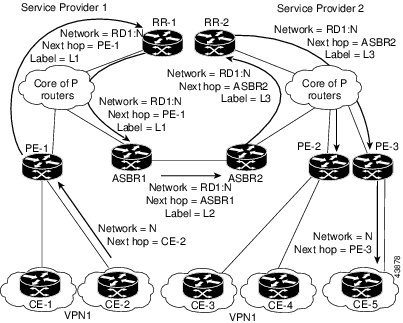 Figure 32-3 illustrates the exchange of VPN route and label information between autonomous systems. The only difference is that ASBR2 is configured with the redistribute connected command, which propagates the host routes to all PEs. The redistribute connected command is necessary because ASBR2 is not the configured to change the next hop address. 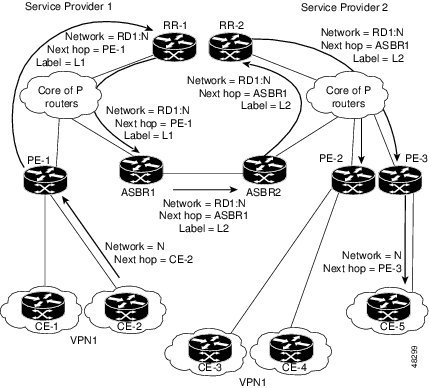 Figure 32-4 illustrates how packets are forwarded between autonomous systems in an interprovider network using the following packet forwarding method:

Packets are forwarded to their destination via MPLS. Packets use the routing information stored in the LFIB of each PE router and eBGP border edge router. The service provider VPN backbone uses dynamic label switching to forward labels.

A data packet carries two levels of labels when traversing the VPN backbone: 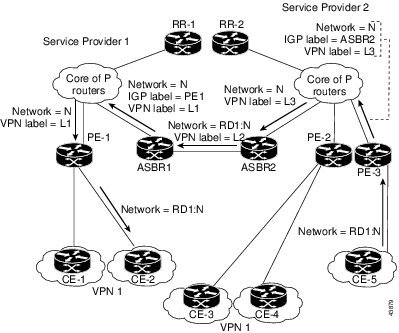 Figure 32-5 illustrates shows the same packet forwarding method, except the eBGP router (ASBR1) forwards the packet without reassigning it a new label. 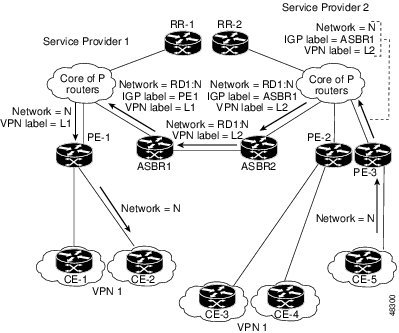 Routing Between Subautonomous Systems in a Confederation

You can configure a confederation with separate subautonomous systems in two ways:

You can configure a router to forward next-hop-self addresses between the CeGRP border edge routers (both directions) and within the iBGP peers at the subautonomous system border. Each subautonomous system runs as a single IGP domain but also forwards next-hop-self addresses between the PE routers in the domain. The CeGRP border edge router addresses are known in the IGP domains.

The distributing router changes the next-hop addresses and labels and uses a next-hop-self address.

Figure 32-6 EGBP Connection Between Two AS's in a Confederation 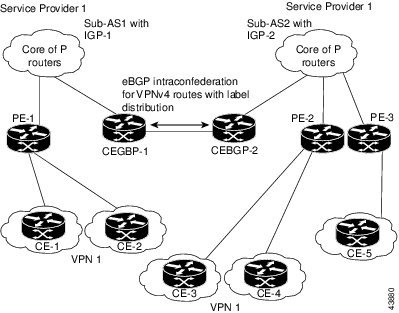 In this confederation configuration: In order for traffic from Acme_Chicago in AS 100 to reach Acme_Rome in AS 200, Prime Fulfillment must provision two links only:

The link between Acme_Chicago and PE-1

As shown in Figure 32-7, Prime Fulfillment routes the VPN traffic from PE-1 to ASBR-1, from ASBR-1 to ASBR-2, then from ASBR-2 to PE-G1; finally the traffic is routed to its destination, Acme-Rome.

Prime Fulfillment currently supports only the inter-AS 10B Hybrid model for L2TPV3 networks. This is the solution documented in the this section.

The current release of Prime Fulfillment provides two pairs of template scripts for provisioning and decommissioning inter-AS 10B Hybrid VPNs:

Using the second pair of template scripts, the provider can create a new pair of data-files for provisioning and decommissioning a new inter-AS VPN on the ASBR, as and when added.The default inter-AS scripts can be modified to create or change scripts for modifying inter-AS configuration.

The following commands are supported in the VPN-independent inter-AS 10B Hybrid default templates:

BGP configuration with a peer-group

The following commands are supported in the VPN-specific inter-AS 10B Hybrid default templates:

Provisioning VRF for a customer VPN

Prime Fulfillment supports inter-AS RT-rewrite configuration on the ASBR. Velocity Template Language (VTL) template scripts for provisioning and decommissioning of RT-rewrite commands are provided as part of the inter-AS 10B hybrid templates, covered in the next section. You can edit these VTL scripts to create your own templates for the respective use-case.

For additional coverage of creating and using templates in Prime Fulfillment, see Chapter 49, "Using Templates and Data Files with Policies and Service Requests"

The default inter-AS templates are provided in the Examples templates directory in Prime Fulfillment. The templates are created from the Service Design window, which you access by choosing:

The templates for Inter-AS 10b hybrid are:

You can create and change templates, using the default provisioning and decommissioning scripts, based on the respective use-case. Because the inter-AS configurations are mostly a one time setup, the templates are downloaded from the device console only, but are not attached to a service request.

The Prime Fulfillment templates feature supports a basic deployment check to determine whether the template data file was successfully deployed or whether there was any command that failed to deploy. In addition, you can select the data-type for the variables, which facilitates entering the right values during data-file creation in the user interface.

The templates you created under Service Design can be selected for deployment on a device or a device-group.