VPN Passthrough is a feature of routers which allows computers on a private network to establish outbound VPNs freely. The term comes from when the VPN traffic is allowed to “pass through” the router. No ports need to be opened to enable VPN Passthrough. This feature is used to either allow or block various VPN tunnels to pass through the device. Features like VPN Passthrough are needed because most routers are Network Address Translation (NAT) enabled and VPN protocols such as IPsec do not have a specific port number for the device to multiplex back the Port Address Translation (PAT). Port Address Translation (PAT) is an extension for network address translation (NAT) and it helps conserve IP addresses as it allows a single IP address to be used by by multiple hosts. 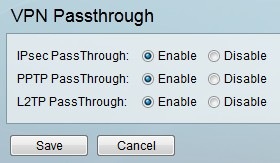 • IPSec PassThrough — Internet Protocol Security (IPSec) is used to apply a safe exchange of packets at IP layer of the TCP/IP Protocol model. IPSec can protect any protocol that runs on top of IP (for instance TCP, UDP, and ICMP) and allows for the information exchanged between remote sites to be encrypted and verified. The advantage of this protocol is it allows for authentication, integrity, access control, and confidentiality with the use of two protocols.

• PPTP PassThrough — Point-to-Point Tunneling Protocol (PPTP) PPTP is a tunneling protocol defined by the PPTP forum that allows PPP packets to be encapsulated within Internet Protocol (IP) packets and forwarded over any IP network, including the Internet itself. PPTP ensures that messages are transmitted from one private network to another. PPTP Passthrough is enabled by default.

• L2TP PassThrough — Layer 2 Tunnelling Protocol (L2TP) is a standard which allows virtual links across the Internet. L2TP is a transport VPN Passthrough which encrypts and encapsulates the data within the L2TP protocol and carries it from one device to another on a network LAN or WAN. L2TP Passthrough is enabled by default.

Note: If you disable VPN passthrough, it may not allow VPN clients to connect to your network.