Prior to illustrating the steps, we’ll review the use cases to help you know if this feature is right for you.

Firmware 1.03.16 or above for the devices listed below (Link to Download Page)

Network booting or net boot is the process of booting a computer from a network location rather than a local drive. Most commonly, a boot file is an encapsulated image or snapshot, of an operating system (OS) and configuration. A “zip file” is a similar type of container; it’s a specific file format that contains a variable data payload. In this case, the boot file’s payload would be an OS and configuration thus containing anything the device would need upon booting up to proceeding past a Power On Self-Test (POST). In theory, file formats can include anything that can be downloaded via TFTP and processed/executed by the Network Card's PXE stack. Below is diagram depicting the actual boot process of the PXE.

As of firmware version 1.03.16 you now have the option to use the server IP address (siaddr) field in the Dynamic Host Configuration Protocol (DHCP) header – called the Next Server field and the file field – titled filename. This field is your boot file or image. For further context see RFC 2131 (Link to view RFC).

So why would you want to use network booting? When using network booting across many workstations, it can streamline the process in disk imaging solutions.

Additional use cases for this feature include:

Why use Network Boot when we have DHCP Option 66?

Net boot much like Option 66 allows for a remote image to be provided to an endpoint. If you needed to provide different images to the same devices on the same Virtual Local Area Network (VLAN), you could do that with both Net Boot and DHCP Option 66. In that sense, the features are complimentary.

Additionally, using a DHCP server as a network boot location was not what DHCP was meant for and this adds complexity to your network. Especially when attempting to serve network booting to multiple hardware platforms.

Note: Not all PXE clients will properly interpret DHCP Option 150 as it is Cisco proprietary; so, if possible Option 66 should be used.

Step 1. After logging into your device, click LAN > VLAN Settings items from the menu-sidebar. 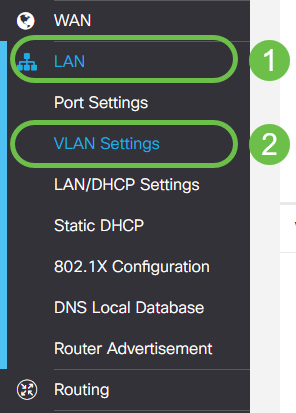 Note: Don’t see the menu sidebar? The menu-sidebar may be in a collapsed state. Try clicking the button in the upper-left hand corner. Example below:

Step 2. In the VLAN Table, click the checkbox to the left of the VLAN you intend to direct to the PXE boot, then click the Edit button. In our case we selected the default VLAN 1. 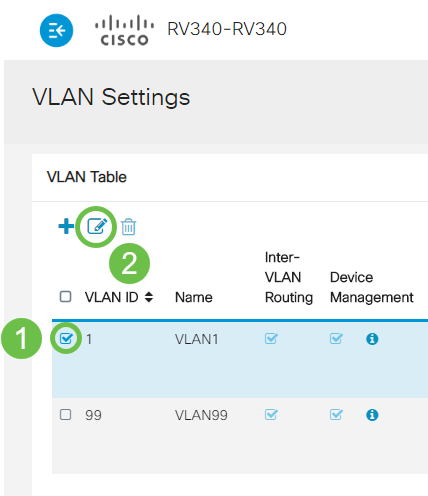 Step 3. Click the checkbox next to Network Booting to Enable it. Then input your Next Server IP address and Boot File name.

Note:.Com files are also accepted, as depicted in the screenshot, though they may be less common. 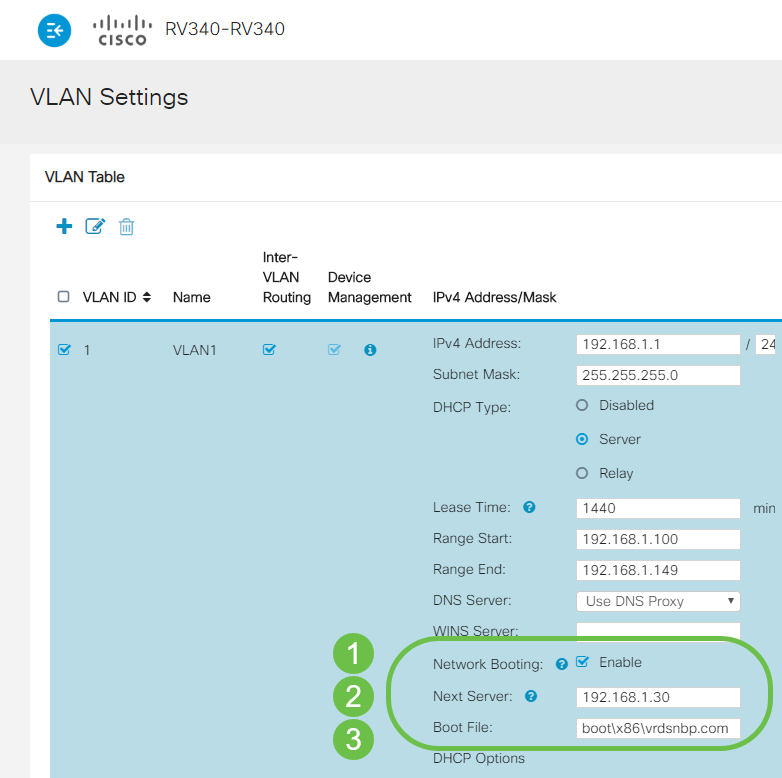 Note: If you wish to save this configuration between boots, be sure to click the blinking save icon in the upper portion of the screen.

The below screenshot displays where to find the Next Server and Boot file fields in the DHCP offer from Wireshark. 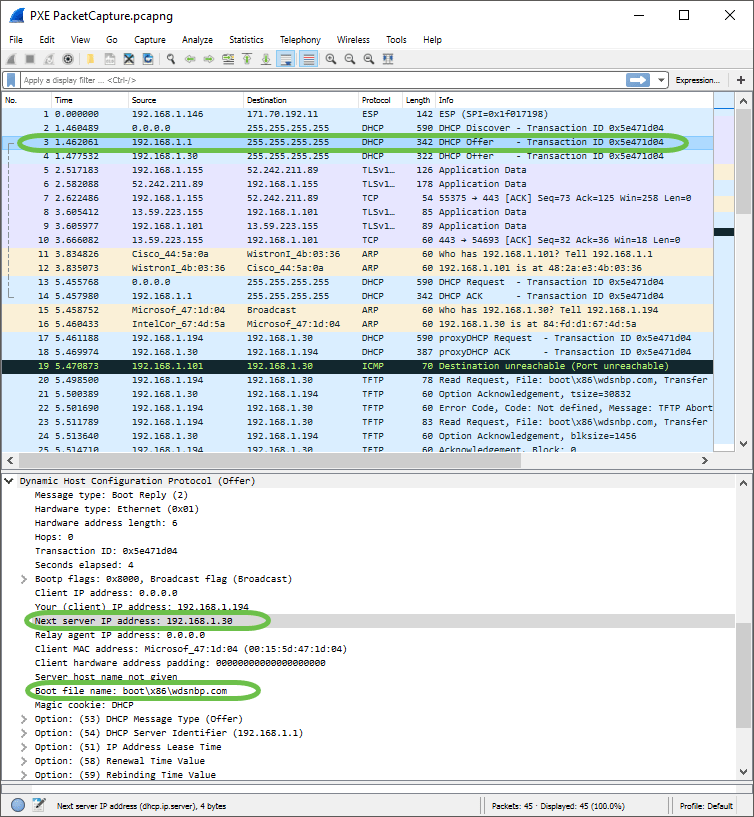 If you run into errors after the client receives the DHCP Proxy request acknowledgement from the PXE server, we are unable to assist directly with those issues. From that point forward try testing the PXE server as well as basic IP connectivity or the PXE Client itself. If the PXE server is on the same VLAN, the PXE client makes its Address Resolution Protocol (ARP) requests for the PXE server. Otherwise PXE servers located outside of the VLAN will be directed to the default gateway.

If you've checked those items and are still encountering an issue, reaching out in our Community would be an option. Click here to visit our Small Business Router community.

And that’s it, you’re now setup to boot workstations on a given VLAN from a network location via PXE using RV34x series router.