This chapter describes the Cisco Unified Network Multicast in IP multicast forwarding and provides information on how to deploy multicast in a wireless environment. A prerequisite for using the multicast performance functionality is that a multicast-enabled network must be configured on all routers between the controllers and the APs. To accommodate networks that do not support multicast, the controller continues to support the original unicast packet forwarding mechanism.

IP multicast is a delivery protocol for information to a group of destinations. It uses the most efficient strategy to deliver the information over each link of the network. It sends only one copy of the information at each hop of the network, creating copies only when the links to the destinations split. Typically, many of today's networks applications use unicast packets i.e., from one source to one destination. However when multiple receivers require the same data, replicating the data from the source to all the receivers as individual unicast packets increases the network load. IP multicast enables efficient transfer of data from a set of sources to a dynamically formed set of receivers.

IP multicast is typically used today for one way streaming media, such as video to large groups of receivers. Many cable TV operators, educational institutions and large enterprises have deployed IP multicast for their content delivery needs. Additionally, there have been some uses of audio and video conferencing using multicast. Another widespread use of multicast within campus and commercial networks is for file distribution, particularly to deliver operating system images and updates to remote hosts. IP multicast has also seen deployment within the financial sector for applications such as stock tickers and hoot-n-holler systems.

With Cisco Unified Wireless Network Software Release 4.1, significant enhancements are made to support the effective use of multicast in a wireless network. In 3.1 and prior software releases, packets intended to be multicast were actually unicast on the wireless network. Multicast support was added in 3.2, but there were some configuration limitations that required broadcast to be enabled. With 4.1, controller software release separate broadcast and multicast support is enabled, allowing networks to be configured with just multicast, broadcast, or the use of both multicast and broadcast.

With the current Cisco Unified Wireless multicast support, each multicast frame received by the controller from a VLAN on the first hop router was copied and sent to the multicast group configured on the controller for the AP that are associated, as shown in Figure 6-1. The multicast LWAPP packet containing the multicast packet uses a WLAN bitmap, which tells the receiving AP which WLAN it must forward the packet to. When the AP receives the LWAPP packet, it strips off the outer LWAPP encapsulation and transmits the multicast packet to the WLAN (on all radios associated to the WLAN) identified in the LWAPP WLAN ID bitmask.

Figure 6-1 Multicast Forwarding Mechanism in Version 4.1 and Below 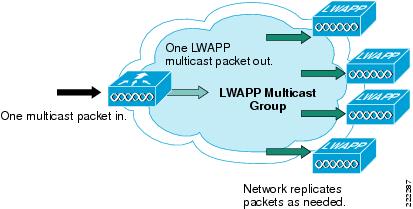 A prerequisite for using the new multicast performance functionality is that a multicast enabled network is configured on all routers between the controllers and the APs. To accommodate networks that do not support multicast, the controller continues to support the original unicast packet forwarding mechanism.

With multicast enabled, any kind of multicast packet received on the VLAN from the first hop router is transmitted over the wireless including HSRP hellos, all router, EIGRP, and PIM multicast packets.

When the source of the multicast group is on the wired LAN:

When the source of the multicast group is a wireless client:

The multicast packet is unicast (LWAPP encapsulated) from the AP to the controller similar to standard wireless client traffic.

A major challenge for a multicast client in a wireless environment is maintaining its multicast group membership when moving about the WLAN. Drops in the wireless connection moving from AP-to-AP can cause a disruption in a client's multicast application. Internet Group Management Protocol (IGMP) plays an important role in the maintenance of dynamic group membership information.

A basic comprehension of IGMP is important for understanding what happens to a client's multicast session when it roams about the network. In a Layer 2 roaming case, sessions are maintained simply because the foreign AP, if configured properly, already belongs to the multicast group and traffic is not tunneled to a different anchor point on the network. Layer 3 roaming environments are a little more complex in this manner and depending on what tunneling mode you have configured on your controllers, the IGMP messages sent from a wireless client will be affected. The default mobility tunneling mode on a controller is asymmetrical. As discussed in the Chapter 2 "Cisco Unified Wireless Technology and Architecture," this means that return traffic to the client is sent to the anchor WLC then forwarded to the foreign WLC where the associated client connection resides. Outbound packets are forwarded out the foreign WLC interface. In symmetrical mobility tunneling mode, both inbound and outbound traffic are tunneled to the anchor controller. For more information on mobility tunneling, see Chapter 2 "Cisco Unified Wireless Technology and Architecture." In the event of a client roam there is a slight disruption in the multicast session; in some applications it may be considered unsuitable for use.

A prerequisite for using this new multicast performance functionality is that a multicast enabled network is configured on all routers between the controllers and the APs. A multicast-enabled network allows for an efficient way to deliver a packet to many hosts across the network. IP multicast is a bandwidth-conserving technology that reduces traffic by simultaneously delivering a single stream of information to thousands of corporate recipients. Packets are replicated as necessary at each Layer 3 point in the network. A multicast routing protocol, such as PIM, is required if there is more than one router between the controllers and APs. For more information on setting up a multicast-enabled network, refer to the following URL: http://www.cisco.com/go/multicast.

Enabling Multicast Forwarding on the Controller

If you have a multicast enabled network, select multicast under Ethernet Multicast Mode to use the method where the network replicates the packets

You do not have a multicast enabled network, select unicast under Ethernet Multicast Mode to use the method where the controller replicates the packets.

On the controller general webpage, ensure the LWAPP transport mode is set to Layer 3. The multicast performance feature only works in this mode.

Select multicast in the drop down menu for the Ethernet Multicast Mode and type in a multicast group address. This option is shown in Figure 6-3.

Figure 6-3 Commands to turn on Ethernet Multicast Mode via the GUI.

Use the show network command to verify the multicast mode on the controller and show lwapp mcast to verify the group on the AP. Other useful commands are show ip mroute and show ip igmp membership on the routers.

Cisco recommends that multicast addresses be assigned from the administratively scoped block 239/8. IANA has reserved the range of 239.0.0.0-239.255.255.255 as administratively scoped addresses for use in private multicast domains (see the note below for additional restrictions). These addresses are similar in nature to the reserved private IP unicast ranges (such as 10.0.0.0/8) defined in RFC 1918. Network administrators are free to use the multicast addresses in this range inside of their domain without fear of conflicting with others elsewhere in the Internet. This administrative or private address space should be used within the enterprise and blocked from leaving or entering the autonomous domain (AS).

Do not use the 239.0.0.X address range or the 239.128.0.X address range. Addresses in these ranges overlap with the link local MAC addresses and will flood out all switch ports even with IGMP snooping turned on.

Cisco recommends that enterprise network administrators further subdivide this address range into smaller geographical administrative scopes within the enterprise network to limit the "scope" of particular multicast applications. This is used to prevent high-rate multicast traffic from leaving a campus (where bandwidth is plentiful) and congesting the WAN links. It also allows for efficient filtering of the high bandwidth multicast from reaching the controller and the wireless network.

For more information on multicast address guidelines, refer to the document at the following URL:

There are two different options to prevent this from happening, either of which is effective by itself. One, you may assign all controllers to the same LWAPP multicast group address. Or two, you can apply standard multicast filtering techniques to ensure that LWAPP encapsulated multicast packets do not reach any other controller. Table 6-1 lists the pros and cons of these two techniques.


All Controllers have the Same LWAPP Multicast Group

Normal boundary techniques should be used in your multicast enabled network. These include using the ip multicast boundary interface mode command, which filters IP multicast traffic and also Auto-RP messages.

In the past, Time To Live field in the IP Multicast datagram was used for creating Auto-RP administrative boundaries using the ttl-threshold command. This has been superseded by the ip multicast boundary interface mode command, which filters IP multicast traffic and also Auto-RP messages. Cisco recommends using the new command.

A typical example on a wireless client VLAN is given below. For more information on other multicast commands for a multicast enabled network refer to http://www.cisco.com/go/multicast. Filtering for multicast-enabled traffic also allows you to prevent propagation of certain worms like the sasser worm which relied on the TCP and ICMP transports with multicast addresses. Blocking these types of traffic with multicast group addresses does not affect most applications since they typically use UDP or TCP for streaming.

In the following example, packets to the multicast group range 239.0.0.0 to 239.127.255.255 from any source will have their packets rate-limited to 128 kbps. The example also sets up a boundary for all multicast addresses not in the lower administratively scoped addresses. In addition, hosts serviced by Vlan40 can only join the lower administrative groups 239.0.0.0 to 239.127.255.255.

The multicast stream in either deployment, distributed or collocated, is not rate-limited and there is no way to put ACLs on it. Once enabled, all multicast traffic is forwarded to the wireless including HSRP, EIGRP, OSPF, and PIM packets

The distributed deployment does not have this problem because while the WLANs are the same, the WLCs are attached to different VLANs. This means that when the multicast client roams to a new WLC, the WLC will first query the client for its multicast group memberships. At this point the client responds with its group membership report and the WLC forwards this message to the appropriate multicast group address through the VLAN associated with its local VLAN. This allows the client to resume its multicast session through the foreign WLC.

Two areas for additional consideration in multicast deployment are when implementing AP groups, and H-REAPs and REAPs. AP groups allow APs on the same controller to map the same WLAN (SSID) to different VLANs. If a client is roaming between APs in different groups, the multicast session will not function properly as this is currently not supported. Currently, the WLC forwards multicast only for the VLAN configured on the WLAN and does not take into consideration VLANs configured in AP groups.

REAP and H-REAP APs allow the local termination of WLANs at the network edge rather than at the WLC, and the multicast behavior is controlled at that edge. If an H-REAP WLAN is terminated on a WLC and multicast is enabled on that WLC, multicast is delivered to that H-REAP WLAN, if the LWAPP multicast group is allowed to extend to the H-REAP network location.

Even if the LWAPP multicast packets are not able to transit the network to the H-REAP, WLAN clients on that H-REAP are able to send IGMP joins to the network connected to the WLC, as these are unicast messages.