A virtual private network (VPN) connection establishes a secure tunnel between endpoints over a public network such as the Internet.

Site-to-site VPNs on 7000 and 8000 Series devices, referred to as Gateway VPNs or Firepower VPNs in the Firepower Management Center are described in Gateway VPNs.

Tunneling makes it possible to use a public TCP/IP network, such as the Internet, to create secure connections between remote users and private corporate networks. Each secure connection is called a tunnel.

IPsec-based VPN technologies use the Internet Security Association and Key Management Protocol (ISAKMP, or IKE) and IPsec tunneling standards to build and manage tunnels. ISAKMP and IPsec accomplish the following:

A device in a VPN functions as a bidirectional tunnel endpoint. It can receive plain packets from the private network, encapsulate them, create a tunnel, and send them to the other end of the tunnel where they are unencapsulated and sent to their final destination. It can also receive encapsulated packets from the public network, unencapsulate them, and send them to their final destination on the private network.

The IKE negotiation comprises two phases. Phase 1 negotiates a security association between two IKE peers, which enables the peers to communicate securely in Phase 2. During Phase 2 negotiation, IKE establishes SAs for other applications, such as IPsec. Both phases use proposals when they negotiate a connection.

An IKE policy is a set of algorithms that two peers use to secure the IKE negotiation between them. IKE negotiation begins by each peer agreeing on a common (shared) IKE policy. This policy states which security parameters protect subsequent IKE negotiations. For IKE version 1 (IKEv1), IKE policies contain a single set of algorithms and a modulus group. Unlike IKEv1, in an IKEv2 policy, you can select multiple algorithms and modulus groups from which peers can choose during the Phase 1 negotiation. It is possible to create a single IKE policy, although you might want different policies to give higher priority to your most desired options. For site-to-site VPNs, you can create a single IKE policy.

When IKE negotiation begins, the peer that starts the negotiation sends all of its policies to the remote peer, and the remote peer searches for a match with its own policies, in priority order. A match between IKE policies exists if they have the same encryption, hash (integrity and PRF for IKEv2), authentication, and Diffie-Hellman values, and an SA lifetime less than or equal to the lifetime in the policy sent. If the lifetimes are not identical, the shorter lifetime—From the remote peer policy—Applies. By default, the Firepower Management Center deploys an IKEv1 policy at the lowest priority for all VPN endpoints to ensure a successful negotiation.

IPsec is one of the most secure methods for setting up a VPN. IPsec provides data encryption at the IP packet level, offering a robust security solution that is standards-based. With IPsec, data is transmitted over a public network through tunnels. A tunnel is a secure, logical communication path between two peers. Traffic that enters an IPsec tunnel is secured by a combination of security protocols and algorithms.

An IPsec Proposal policy defines the settings required for IPsec tunnels. An IPsec proposal is a collection of one or more crypto-maps that are applied to the VPN interfaces on the devices. A crypto map combines all the components required to set up IPsec security associations, including:

On a FTD device, by default no traffic is allowed to pass through access-control without explicit permission. VPN tunnel traffic as well, is not relayed to the endpoints until it has passed through Snort. Incoming tunnel packets are decrypted before being sent to the Snort process. Snort processes outgoing packets before encryption.

Access Control identifying the protected networks for each endpoint node of a VPN tunnel determines which traffic is allowed to pass through the FTD device and reach the endpoints.

In addition, the system does not send tunnel traffic to the public source when the tunnel is down.

There is no specific licensing for enabling Firepower Threat Defense VPN, it is available by default.

The Firepower Management Center determines whether to allow or block the usage of strong crypto on a Firepower Threat Defense device based on attributes provided by the smart licensing server.

How Secure Should a VPN Connection Be?

Because a VPN tunnel typically traverses a public network, most likely the Internet, you need to encrypt the connection to protect the traffic. You define the encryption and other security techniques to apply using IKE polices and IPsec proposals.

If your device license allows you to apply strong encryption, there is a wide range of encryption and hash algorithms, and Diffie-Hellman groups, from which to choose. However, as a general rule, the stronger the encryption that you apply to the tunnel, the worse the system performance. Find a balance between security and performance that provides sufficient protection without compromising efficiency.

We cannot provide specific guidance on which options to choose. If you operate within a larger corporation or other organization, there might already be defined standards that you need to meet. If not, take the time to research the options.

Deciding Which Encryption Algorithm to Use

When deciding which encryption algorithms to use for the IKE policy or IPsec proposal, your choice is limited to algorithms supported by the devices in the VPN.

For IKEv2, you can configure multiple encryption algorithms. The system orders the settings from the most secure to the least secure and negotiates with the peer using that order. For IKEv1, you can select a single option only.

Deciding Which Hash Algorithms to Use

For IKEv2, you can configure multiple hash algorithms. The system orders the settings from the most secure to the least secure and negotiates with the peer using that order. For IKEv1, you can select a single option only.

You can choose from the following hash algorithms.

Deciding Which Diffie-Hellman Modulus Group to Use

You can use the following Diffie-Hellman key derivation algorithms to generate IPsec security association (SA) keys. Each group has a different size modulus. A larger modulus provides higher security, but requires more processing time. You must have a matching modulus group on both peers.

If you select AES encryption, to support the large key sizes required by AES, you should use Diffie-Hellman (DH) Group 5 or higher. IKEv1 policies do not support all of the groups listed below.

To implement the NSA Suite B cryptography specification, use IKEv2 and select one of the elliptic curve Diffie-Hellman (ECDH) options: 19, 20, or 21. Elliptic curve options and groups that use 2048-bit modulus are less exposed to attacks such as Logjam.

For IKEv2, you can configure multiple groups. The system orders the settings from the most secure to the least secure and negotiates with the peer using that order. For IKEv1, you can select a single option only.

When you create a new VPN topology you must, at minimum, give it a unique name, specify a topology type, and select the IKE version. You can select from three types of topologies, each containing a group of VPN tunnels:

Define a pre-shared key for VPN authentication manually or automatically, there is no default key. When choosing automatic, the Firepower Management Center generates a pre-shared key and assigns it to all the nodes in the topology.

In a point-to-point VPN topology, two endpoints communicate directly with each other. You configure the two endpoints as peer devices, and either device can start the secured connection.

In a Hub and Spoke VPN topology, a central endpoint (hub node) connects with multiple remote endpoints (spoke nodes). Each connection between the hub node and an individual spoke endpoint is a separate VPN tunnel. The hosts behind any of the spoke nodes can communicate with each other through the hub node.

The Hub and Spoke topology commonly represent a VPN that connects an organization’s main and branch office locations using secure connections over the Internet or other third-party network. These deployments provide all employees with controlled access to the organization’s network. Typically, the hub node is located at the main office. Spoke nodes are located at branch offices and start most of the traffic. 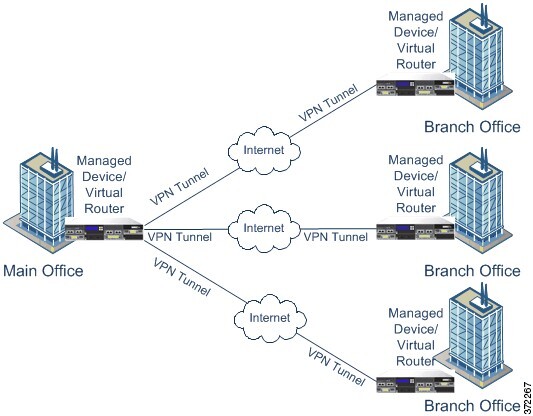 In a Full Mesh VPN topology, all endpoints can communicate with every other endpoint by an individual VPN tunnel. This topology offers redundancy so that when one endpoint fails, the remaining endpoints can still communicate with each other. It commonly represents a VPN that connects a group of decentralized branch office locations. The number of VPN-enabled managed devices you deploy in this configuration depends on the level of redundancy you require. 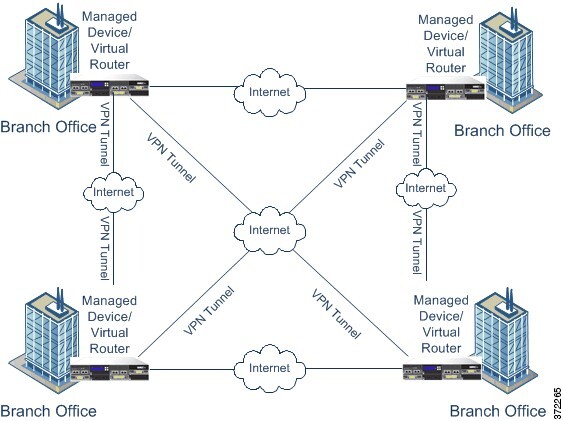 In addition to the three main VPN topologies, other more complex topologies can be created as combinations of these topologies. They include: