This chapter provides an overview of the Cisco Remote Integrated Service Engine (RISE) protocol with an external service appliance and the Cisco Nexus 5500 Series switches.

Cisco RISE is an architecture that logically integrates an external service appliance, such as a Citrix NetScaler Application Delivery Controller (ADC) appliance appears and operates as a service module within the Cisco Nexus 5500 switch.

The Cisco NX-OS software in which RISE is supported supports the Cisco Nexus 5500 Series switches.

Your software release might not support all the features documented in this module. For the latest caveats and feature information, see the Bug Search Tool at https:/​/​tools.cisco.com/​bugsearch/​ and the release notes for your software release. To find information about the features documented in this module, and to see a list of the releases in which each feature is supported, see the “New and Changed Information” chapter.

The Citrix Netscaler Application Delivery Controller (ADC) is a network switch that performs application-specific traffic analysis to intelligently distribute, optimize, and secure layer 4 to layer 7 network traffic for web applications. For example, a Citrix Netscaler Application Delivery Controller (ADC) makes load balancing decisions on individual HTTP requests instead of on the basis of long-lived TCP connections, so that the failure or slowdown of a server is managed much more quickly and with less disruption to clients. The feature set can be broadly categorized as consisting of switching features, security and protection features, and server-farm optimization features.

The Cisco Nexus Series switches run on the Cisco NX-OS software. This software fulfills the routing, switching, and storage networking requirements of data centers and provides an Extensible Markup Language (XML) interface and a command-line interface (CLI) that is similar to Cisco IOS software. As a crucial element in data center I/O consolidation, the switch enables I/O consolidation at the access layer and provides interoperability with the Cisco Nexus Series switches and other standards-based products.

Cisco Prime NAM Appliances are purpose-built devices that uniquely combine application visibility and network performance analytics to help accelerate operational decisions. They help you understand who is using the network, know what applications are running on the network, assess how the applications are performing, and characterize how traffic over the network is being used. And, when there is a problem, Cisco Prime NAM Appliances can help you find it fast, reducing the time it takes to resolve the problem from days to just minutes.

The discovery and bootstrap functionality enables the Cisco Nexus 5500 Series switches to communicate with the appliance by exchanging information to set up the Remote Integrated Service Engine (RISE) channel, which transmits control and data packets. Auto-discovery is supported only when you directly connect the service appliance with the Cisco Nexus switch. Once you configure the RISE control channel on the switch, the connected service appliance is set to RISE mode and all of its ports are set to operational mode by default.

In indirect mode (when the appliance is either Layer 2 or Layer 3 adjacent to the switch), you must manually configure the appliance and the Cisco Nexus switches to establish the control channel connectivity and for discovery and bootstrap to occur.

A RISE-enabled appliance can use its health monitoring feature to track and support server health by sending out health probes to verify server responses.

The Cisco Nexus switch and the appliance also periodically send heartbeat packets to each other. If a critical error occurs and health monitoring detects a service instance failure, or if the heartbeat is missed six times successively, the RISE channel becomes nonoperational. The health monitoring timer is 30 seconds (sec).

During an in-service software upgrade (ISSU), all RISE control channel communications are disabled. The configuration state across all components is restored after the ISSU is completed. Data traffic is not affected during an ISSU.

During an in-service software downgrade (ISSD), when you are downgrading from a Cisco Nexus 5500 Series switch software image with RISE support to an image without RISE support, you are notified that you should enter the no feature rise command before proceeding with the downgrade. This removes all of the RISE configuration and runtime configuration from the switch.

In Cisco NX-OS 7.1(1)N1(1) and later releases, the Cisco Nexus 5500 Series switch provides start and stop notifications to the RISE service appliance during an in-service software upgrade (ISSU) or downgrade. This notification includes the hitful and hitless status of the line card to which the appliance is connected.

The recommended RISE deployment is a one-arm mode NetScaler deployment with all of the appliance ports bundled as a port channel connected to the Cisco Nexus 5500 Series switches.

In the one-arm mode (see figure below), the Citrix Netscaler Application Delivery Controller (ADC) appliance is configured with a VLAN that handles both client and server requests.
Figure 1. One-Arm Deployment 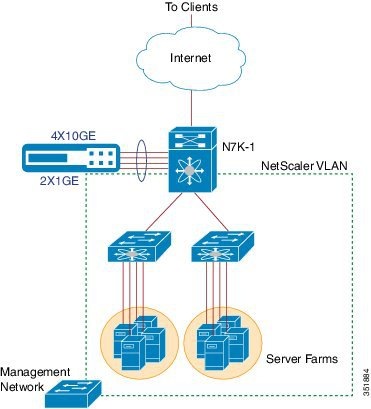 This section describes the basic redundancy deployments that support the Cisco Remote Integrated Service Engine (RISE) runtime message handling between a service appliance and the Cisco Nexus 5500 Series switch. A high availability, redundant deployment uses a maximum of two appliances (peers) to support seamless switchover of flows in case one of the appliances becomes unresponsive.

When the Cisco Nexus 5500 Series switch and the appliance are deployed in a RISE integration, the virtual device context (VDC) on the switch collapses multiple logical networks within a single physical infrastructure.

The appliance creates virtual contexts on the single physical appliance that is connected to the VDCs on the switch.

The VDC ID is part of the discovery and bootstrap payload and the appliance is aware of the VDCs for each VLAN with which it is associated. The Cisco Nexus 5500 Series switch supports 32 RISE instances per VDC.