This document describes supported and unsupported topologies when you create routing protocol or PIM adjacencies.

Cisco recommends that you have a basic knowledge of how routing protocols are configured on Nexus switches and other routers. Cisco also recommends you understand the configuration and operation of vPC, vPC forwarding characteristics, and the behavior of the vPC Peer Gateway (through the peer-gateway vPC domain configuration command) and Routing/Layer 3 over vPC (through the layer3 peer-router vPC domain configuration command) enhancements. For more information about these vPC enhancements, consult the relevant sections of the Understand Virtual Port-Channel (vPC) Enhancements document.

Routing protocol or PIM adjacencies are created between external Layer 3 (L3) devices and Cisco Nexus switches in a Virtual Port Channel (vPC) environment. The term protocol adjacency is used throughout this document to represent the formation of a protocol neighbor relationship between the referenced devices. vPC+ is not covered by this article.

Supported Topologies for Routing in a vPC Environment

The topology shown in Figure 1 can be used to demonstrate the various connectivity options for protocol adjacencies in a vPC environment. The Nexus switches are in a vPC domain with these details:

Figure 1: Supported Topologies for Routing in a vPC Environment 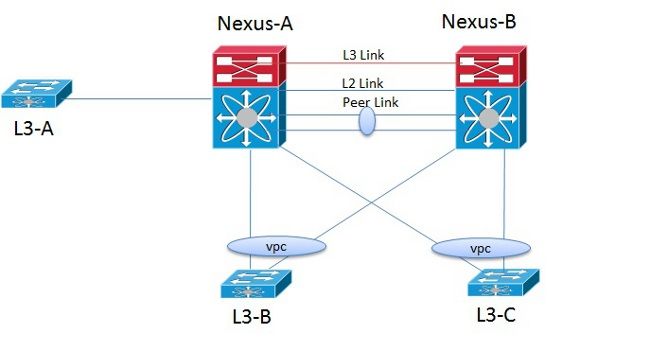 Based on the topology in Figure 1, Table 1 describes which physical links support protocol adjacencies between the two Nexus switches and between a Nexus switch and an L3 device connected to its vPC peer. Each type of link used for the protocol adjacency is detailed and references any applicable caveats which are detailed in Table 1.

%   Layer3 peer-router capability is required to utilize the vPC peer-link as transit routing path (without a parallel L2 link).

Table 2 describes which routing protocol adjacencies are supported over vPC VLANs based on the topology in Figure 1.