This document will outline behavior of the network in reaction to different disruptions, concentrating on Virtual Port-Channel (vPC).

A typical disruption would be - a reload, link loss, or connecivity loss.

The aim of this document is to demonstrate packet loss during common scenarios.

During testing, unless otherwise stated following topology is used. 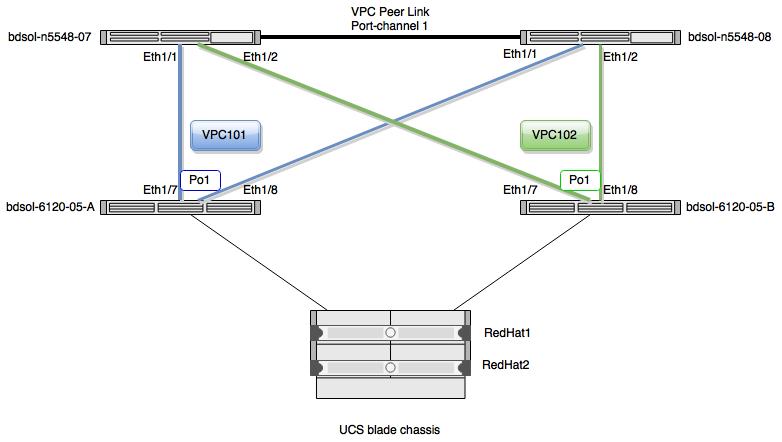 Green and blue lines indicate a vPC port channel from each of the Fabric Interconnects to both Nexus switches.

Not outlined is the out of band management network.

It is a simplified topology commonly recommended in FlexPod deployments as seen for example in:

Both the vPC and portchannel configuration is using default.

Following test will be performed.

- Loss of peer keepalive link - mgmt0 interface in case of this topology/configuration.

- Loss of peer portchannel - Port-channel 1 in this configuration.

A single iperf3 session is used to generate 6.5 gigabits per second of test TCP traffic to verify frame loss during transitions. 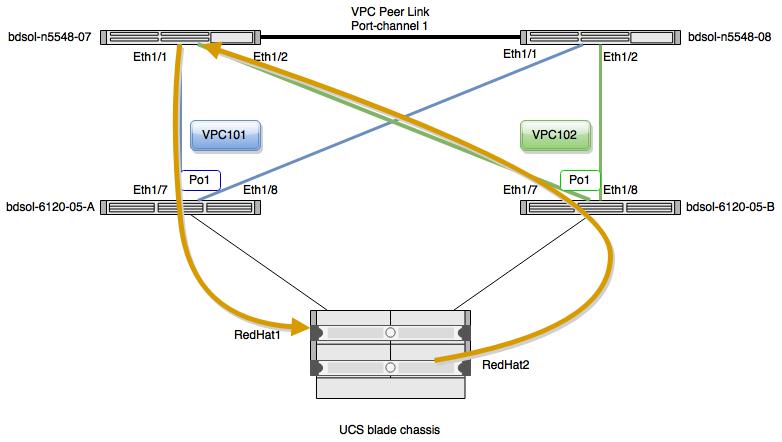 The above parameters were picked to allow high rate of traffic and easy to spot packet loss.

TCP window is clamped to avoid data bursts iperf is know for. Allowing iperf to run unclamped could result in occasional drops in ingress buffers along the path - depending on QoS configuration. The above parameters allow for a sustained rate of 6-7 Gbps without frame loss.

To verify we can check cumulative rate of traffic on interfaces.

This test is designated to test how data will behave if a link which is part of vPC is shut down.

This example will use Ethernet 1/1, the output interface for data traffic, it will be shut down using command line.

In this case only a single packet was lost, out of flood of 6.5 Gbps stream.

Traffic is almost immediately balanced among remaining links in portchannel on UCS, in this case using UCS FI B's Ethernet 1/8 (the only remaining) port going up to Nexus 5548 B, from there it will be transported to UCS FI A using Ethernet 1/1.

A combined data and control plane disruption can be emulated by performing a disruptive upgrade the bdsol-n5548-07 (primary vPC).

Functionally this test is the same as reloading a vPC peer.

During that time only 55 packets are lost (out of the stream of 6.6 Gbps).

If the iperf3 was restarted immediately the operator can verify that traffic indeed switched over to bdsol-n5548-08.

The traffic rate is showing below 6Gbps since the rate counter is averaged over 30 seconds.

In this example the vPC peer link goes down, triggered by a configuration change.

At that time traffic is handled by bdsol-n5548-07, acting vPC secondary.

The sequence of events.

Since bdsol-n5548-07 is acting secondary it will suspend its vPCs since it cannot guarantee loopless topology:

During this time iperf3 lost a portion of traffic - 90 packets.

But was able to recover pretty fast.

Again, the rate does not show 6.5 gigabits per second immediately due to load average being calculated.

Recovery from vPC link down.

When vPC peer link comes back alive, traffic may be re-balanced between links and a short lived packet loss due to topology change may be expected.

In case of this lab test 1 packet was lost.

In this test an ISSU upgrade was performed in order to verify traffic disruption.

The vPC roles during this test are as follows:
bdsol-n5548-07 - primary

To perform an ISSU defined criteria must be met.

In order to find information regarding commands used to check these criteria and perform an ISSU the following guide was used:

After performing an ISSU first on the primary and afterwards on the secondary vPC peer no packets have been lost.

This is due to the fact that ISSU all data plane functionality remains undisrupted and only control plane traffic would be affected.

During the ISSU testing a number of issues needed to be resolved. The "show install all impact ..." command may provide output that ISSU cannot be performed with the following explanation: "Non-disruptive install not supported if L3 was enabled." In the testing environment this was due to the LAN_BASE_SERVICES_PKG being in use in the installed license file.

After the loss of the peer keepalive mgmt0 link no disruption in the traffic was recorded. In this topology, the management interface (mgmt0) is used as keepalive link, hence does not impact the data traffic generated during testing.

The devices notice mgmt0 interface going down, and peer keepalives failing, but since peer link is up data place communication can  continue.

This test will describe what happens when vPC is disabled on one of the switches during live data transfer.

VPC feature can be disabled using the following command in the global configuration mode:

Disabling the vPC feature on either primary or secondary vPC peer leads to instant loss of data connectivity. This is due to the peer based nature of vPC. As soon as the feature is disabled, all vPC functionality on the switch ceases to function, the peer link goes down, vPC keepalive status is Suspended and port-channel 101 of the testing environment goes down. This is evident in the show vPC output of the peer switch which still has vPC feature enabled.

The traffic interruption, as before, is only short lived.

Under above mentioned testing conditions 50-80 packets were lost from a single session.

This configuration needs to be readded.

vPC feature is intended to bring resiliency performance by splitting data traffic in a port channel among multiple devices.

The above tests were meant to show disruptions to both the control- and data-plane which may occur during life cycle of the feature.

The most disruptive test performed - vPC peer link being shut down - potentially combines both data and control plane failure. Still a fast convergence time was demonstrated.