What You Will Learn. 3

This document provides an overview of the microburst monitoring feature on the Cisco Nexus® 5600 platform and Cisco Nexus 6000 Series Switches. With the proliferation of virtual machines in the data center, the likelihood that multiple devices will send traffic to the same destination increases dramatically. Because Ethernet is a serial transport medium, these burst events cause temporary congestion that can go undetected. This microburst congestion can lead to buffer exhaustion, which results in tail drops and lost packets. The Cisco Nexus 5600 platform and Cisco Nexus 6000 Series Switches introduce a way to mark microbursts so that they can be observed, tracked, and understood so that effective mitigation actions can be implemented.

A microburst is a short burst of traffic with a duration tending toward zero and an intensity tending toward infinite. Microbursts usually lead to temporary traffic buffering, increasing latency momentary, and can cause traffic drops if the buffering capacity is exceeded. Microbursts in typical data center networks are actually very common, but they are often undetected. Numerous virtual machines, physical machines, and data storage devices communicate at the same time, which leads to intense traffic for extremely short periods of time, or microbursts. It is hard to predict where microbursts will occur and how traffic on a particular device will be affected.

Common data center switches provide basic per-port bandwidth monitoring and can show the current bandwidth on a port. However, these measurement tools are unable to detect microbursts because they are monitoring very large time intervals.

The solution is a feature that can detect unexpected bursts of data in extremely short periods of time, on the order of microseconds. The Cisco Nexus 5600 platform and Cisco Nexus 6000 Series Switches support a microburst monitoring feature that detects microbursts that occur in microsecond time periods.

Figure 1.      Example of a Microburst in the Network 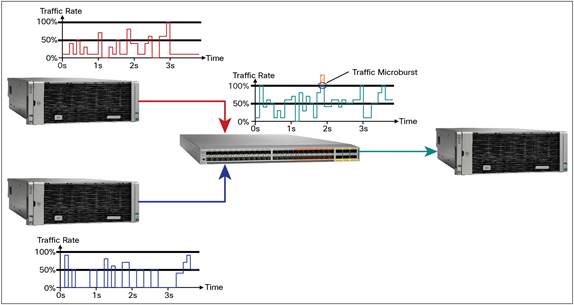 Microburst monitoring detects microbursts when a specific number of packets or a specific amount of data (in bytes) is exceeded during a defined time interval. The switch counts every occurrence and tallies the information in a table. This table allows the network administrator to quickly correlate application behavior with a server and network port. When this information is used in combination with logging information, the exact time of the event can be known.

To configure microburst monitoring, on the interface on which microbursts are expected you need to be set the threshold values and the direction in which traffic will be observed, using the keywords ingress and egress. You can also monitor traffic in both directions at the same time on the same switch port, and if you want, the feature can be configured on all ports on the system.

The other parameter you need to specify is the time interval, in microseconds. The interval can range from 1 microsecond to 16.8 seconds (16777215 microseconds).

The following command configures an ingress burst size of 1 byte with a 1-microsecond time interval:

The command shown here configures an egress burst limit of a 1 percent of link speed with a 1-microsecond time interval:

The following command configures the ingress burst maximum. After one microburst occurs, the system will generate a syslog message.

The command shown here configures the egress burst maximum. After one microburst occurs, the system will a generate syslog message.

After you have configured all the parameters, the microburst monitoring feature on the Cisco Nexus 5600 platform and Cisco Nexus 6000 Series Switches will monitor traffic behavior and count each microburst that is recognized. The display will show the port, burst count, and burst direction. To display burst counters, run the show interface burst-counters command. To display the count for only one interface, specifying the interface number after the keyword interface.

The following is a sample log message showing a microburst event:

detected on ingress side on Ethernet1/1 - bigsurusd

The microburst monitoring feature on the Cisco Nexus 5600 platform and Cisco Nexus 6000 Series Switches lets you see the microbursts that have been silently occurring in the network. This real-time capability gives network administrators a better understanding of the application demands on the network over time. Through this real-time data analysis feature, congestion points and times can be understood so that the network architecture can be optimized to meet the increasing demands of next-generation applications.