This chapter covers the following topics:

However, Cisco ISE, Release 1.2, supports a new policy model called Policy Set, which is similar to the Service Selection Policy (SSP) in Cisco Secure ACS, Release 5.3 and this has helped simplify the policy migration process.

Persists data in the migration tool.

The following are major features of the Cisco Secure ACS 5.3 to Cisco ISE, Release 1.2 migration process:

At the import stage, the migration tool contains information from Cisco Secure ACS and is ready to import the data into Cisco ISE. If you use the same machine to install Cisco ISE, you have to reimage the Cisco Secure ACS machine with the Cisco ISE, Release 1.2 image and start the import operation. If you want to use a different machine for Cisco ISE, it should be a clean machine right after installation, without any configuration on it.

You can view the import progress through the Cisco Secure ACS-Cisco ISE Migration Tool user interface. You can see the object types that are being transferred and how many objects are pending for delivery. Any errors during this process are logged in the Import Report.

The migration tool supports object scale as described in Table 1-2 .

The Cisco Secure ACS to Cisco ISE Migration Tool maintains a checkpoint at each stage of the import or export operation. This means that if the process of importing or exporting fails, you do not have to restart the process from the beginning. You can start from the last checkpoint before the failure occurred.

Three Cisco ISE reports are generated during Cisco Secure ACS 5.3 data migration. If you decide to share the report files with anyone, or want to save them to another location, you can find the files in the Reports folder of the migration tool directory:

Export Report— Indicates specific information or errors that are encountered during the export of data from the Cisco Secure ACS database. It contains a data analysis section at the end of the report, which describes the functional gap between Cisco Secure ACS and Cisco ISE. The export report also includes error information for exported objects that will not be imported. See Table 1-3 .

Import Report —Indicates specific information or errors that are encountered during the import of data into the Cisco ISE appliance. See Table 1-4 .

During the export phase, the migration tool identifies gaps in the authentication and authorization policies. If any policy is not migrated, it is listed in the Policy Gap Analysis report. The report lists all the incompatible rules and conditions that are related to policies. It describes data that cannot be migrated and the reason for a manual workaround.

Some conditions can be automatically migrated by using the appropriate Cisco ISE terminology, for example, a condition named Device Type In is migrated as Device Type Equals. If a condition is supported or can be automatically translated, it does not appear in the report. If a condition is found as “Not Supported” or “Partially supported,” the policy is not imported and the conditions appear in the report. It is the responsibility of the administrator who is performing the migration to modify or delete such conditions. If they are not modified or deleted, policies are not migrated to Cisco ISE. 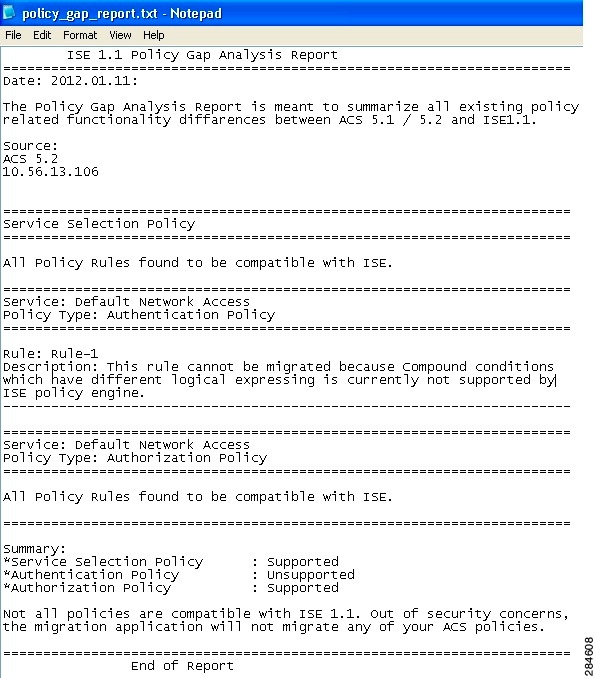 The Cisco ISE FIPS mode should not be enabled before the migration process is complete.