By default, WAE Design creates and routes RSVP LSPs. However, you can create Segment Routing (SR) LSPs by changing the LSP Type property to SR. These SR LSPs use autoroute, forwarding adjacencies, and class-based forwarding, just like RSVP LSPs. Once the packet enters the tunnel, the different routing mechanisms determine the path. An RSVP LSP is first established along a path, with each node on the path accepting the reservation request and maintaining the reservation state. In contrast, SR LSPs rely on a segment list that is created at the LSP’s source node (head-end). This segment list, which is stored in the packet (demand), directs the traffic over a series of configured node segments and interface segments. SR LSPs use IP routing (and thus, potentially ECMP) between segments.

The segment list of an SR LSP contains one or more segment list hops, which can be nodes, interfaces, SR LSPs, or anycast groups.

When using node segment list hops, the SR LSP takes the shortest path to the specified node. Figure 11-1 shows an example SR LSP from cr2.kcy node to cr2.mia node using one node segment list hop, which is cr2.okc. Because the IGP metrics are equal, the traffic is routed using ECMP to reach okc. 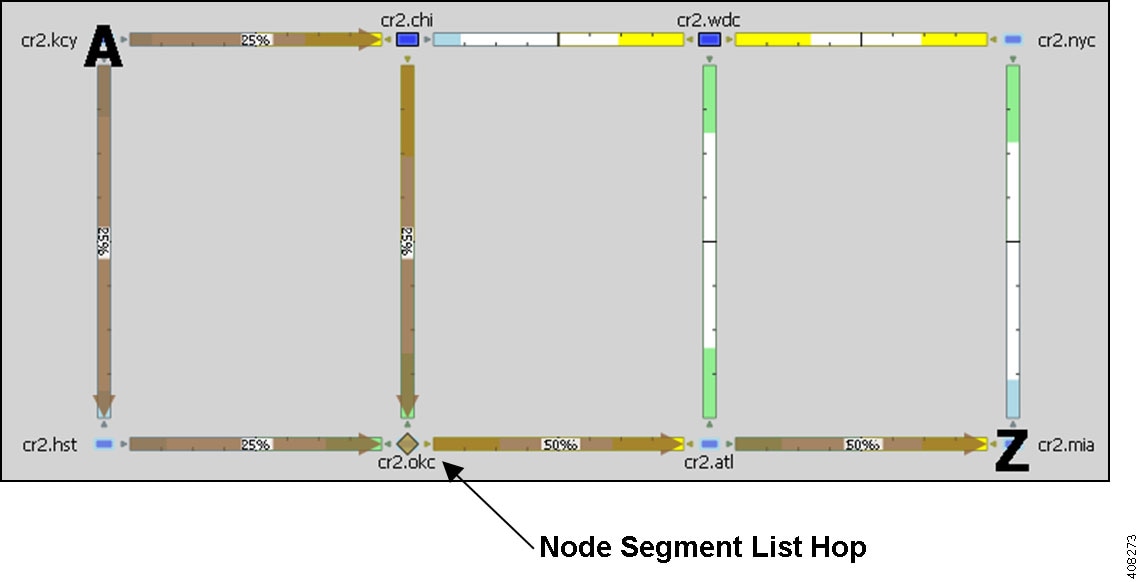 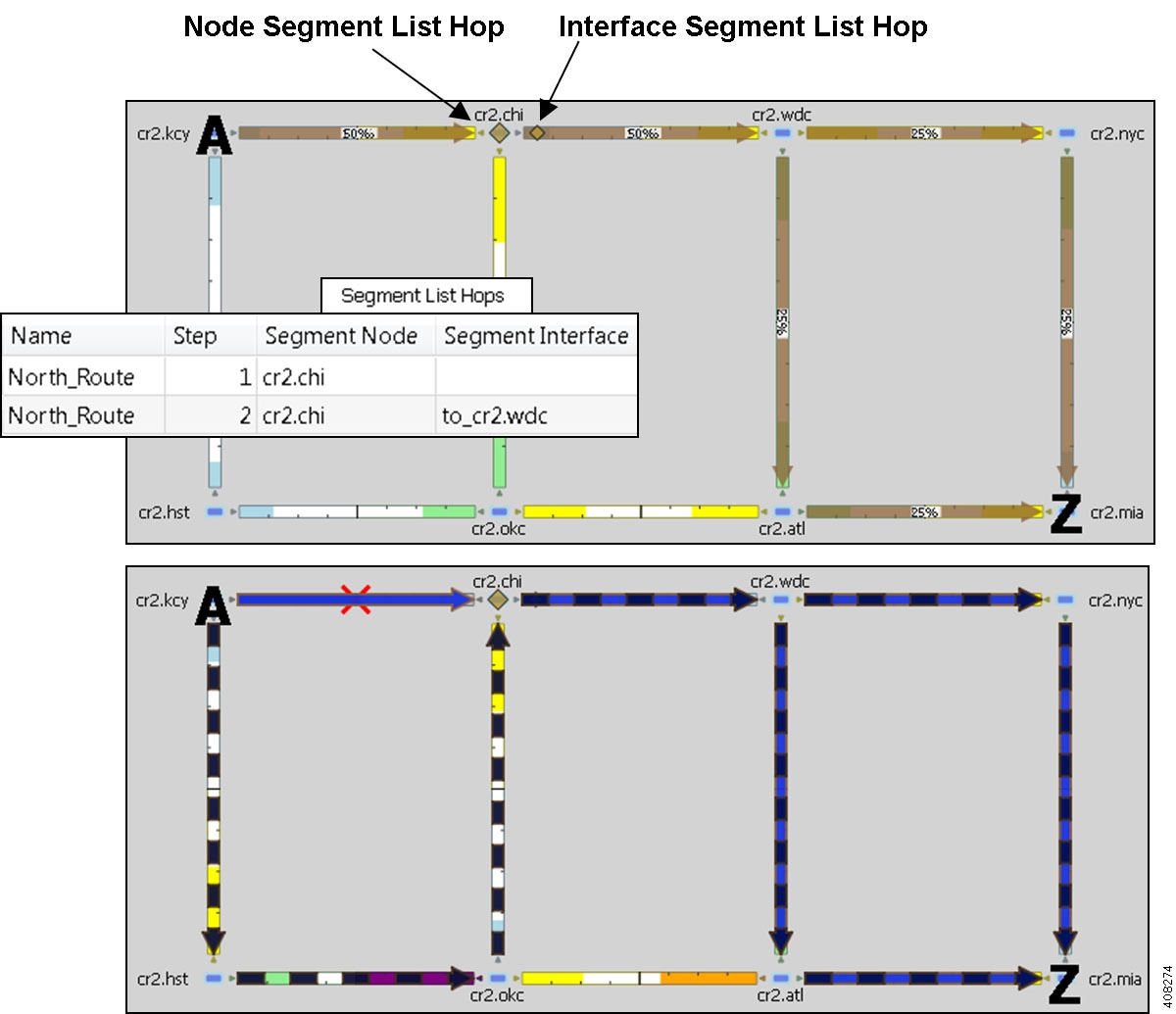 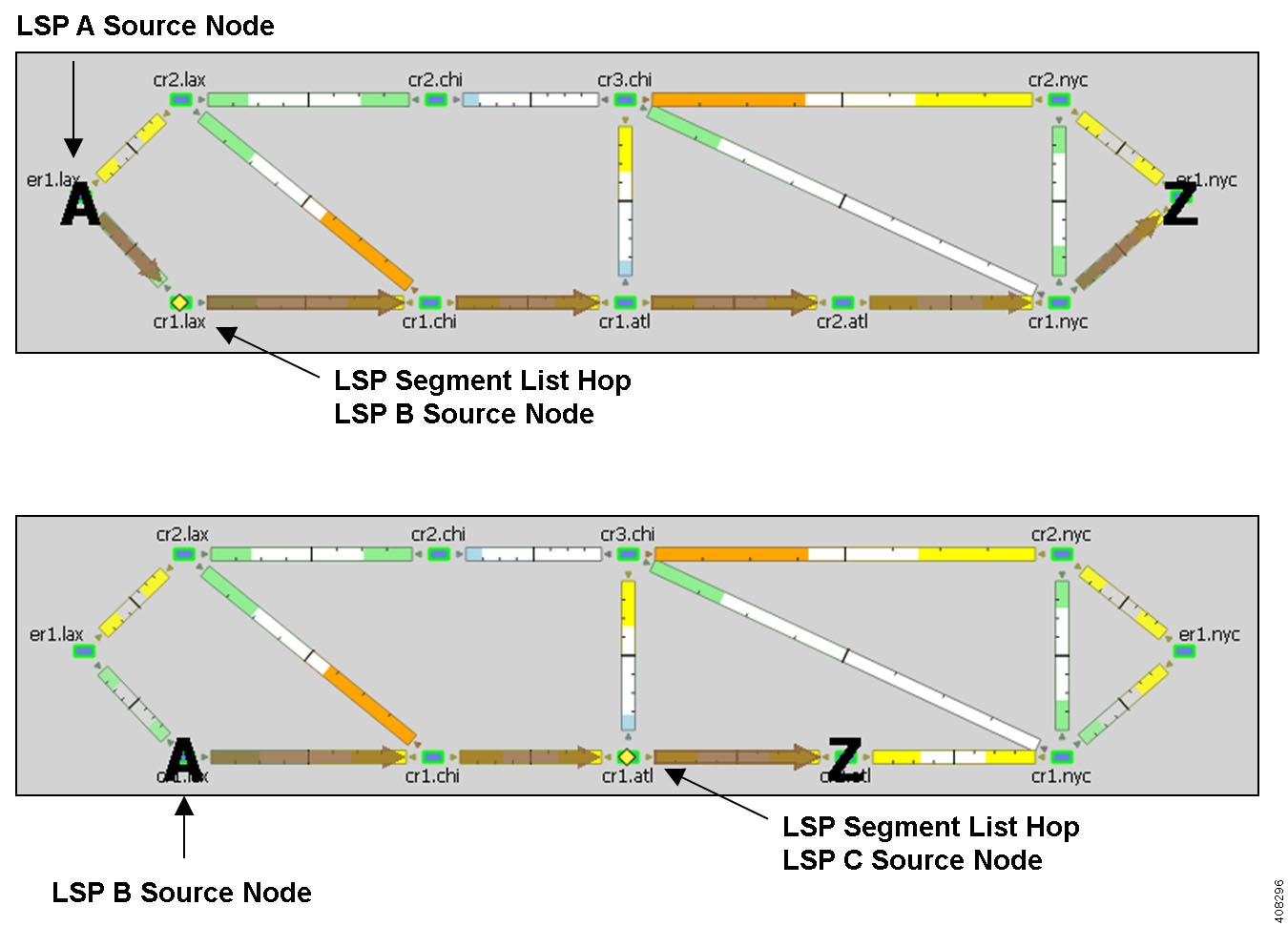 An SR LSP routes through the node in an anycast group segment list hop that has the shortest path to it. In case of a tie between multiple nodes in an anycast group, ECMP is applied. This mechanism lets you impose routing restrictions in terms of potential intermediate segment destinations. It also lets the SR LSP choose among the possible next hops (next segment list hops), potentially reducing latency and improving load balancing.

Figure 11-4 shows an example of anycast group nodes cr2.chi and cr1.chi. In one instance, the IGP metrics to those nodes have equal IGP metrics, so the SR LSP uses ECMP to route through both of them. When the IGP metric increases from cr2.lax to cr1.chi, the SR LSP routes only through cr2.chi because it has the shortest path. However, as Figure 11-5 shows, if a failure prevents the shortest path from being used, the SR LSP can still route through the anycast group using the next-highest cost path. 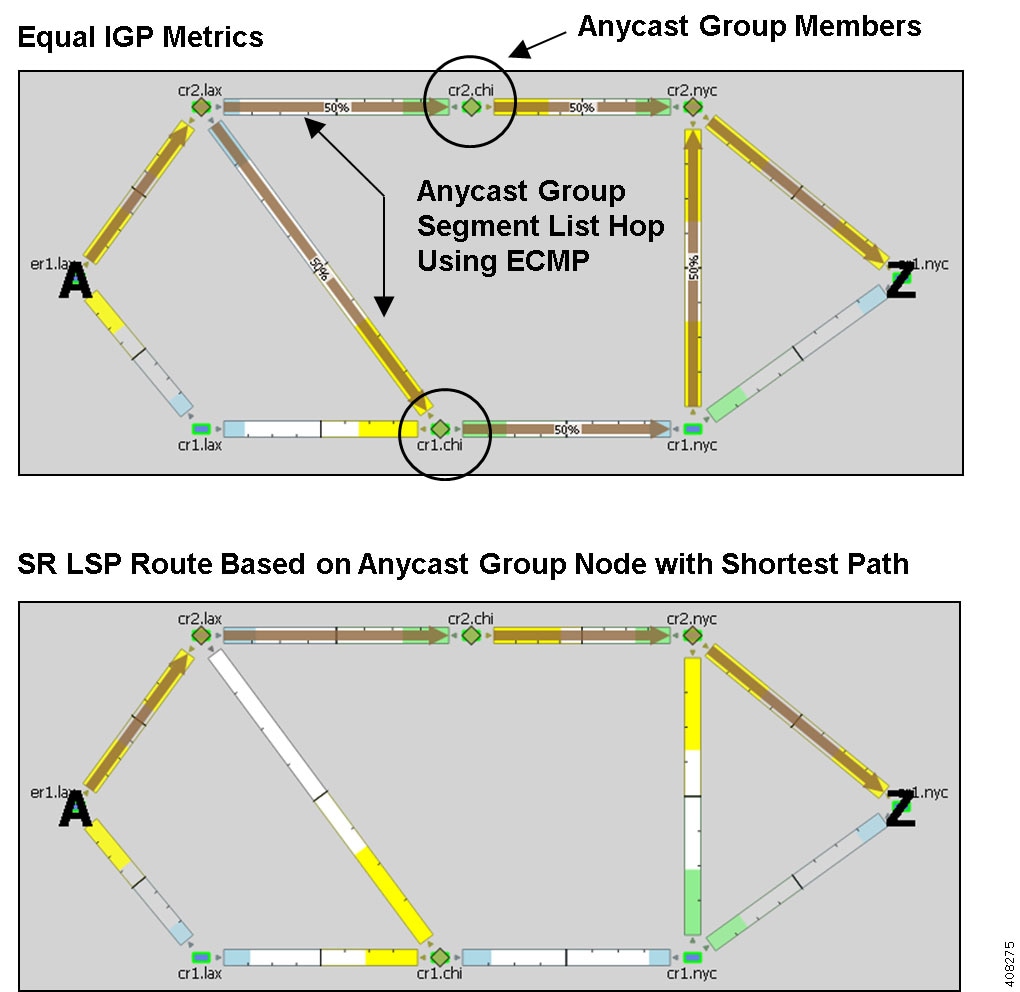 If both the SR LSP and its SR LSP paths have segments, the segments on the LSP paths override those on the SR LSP.

Assuming the common LSP mechanisms such as autoroute and forwarding adjacencies have determined that a demand will enter an SR LSP, the LSP traffic is routed as follows. If the destination node or segment list hops are not reachable, the SR LSP is not established.

If it is using an interface segment list hop, the demand takes the shortest path of the source node of that interface, and then routes to that interface’s destination node.

If it is using an anycast group segment list hop, the demand routes through the node with the shortest path. In case of a tie between multiple nodes in an anycast group, the SR LSP uses ECMP to route.

A node segment list hop exists on the first node traversed in another AS. This node is the entry node. If there are multiple peering interfaces, their metrics determine which one the LSP uses.

An interface segment list hop connects the exit node of one AS to an entry node in another AS. 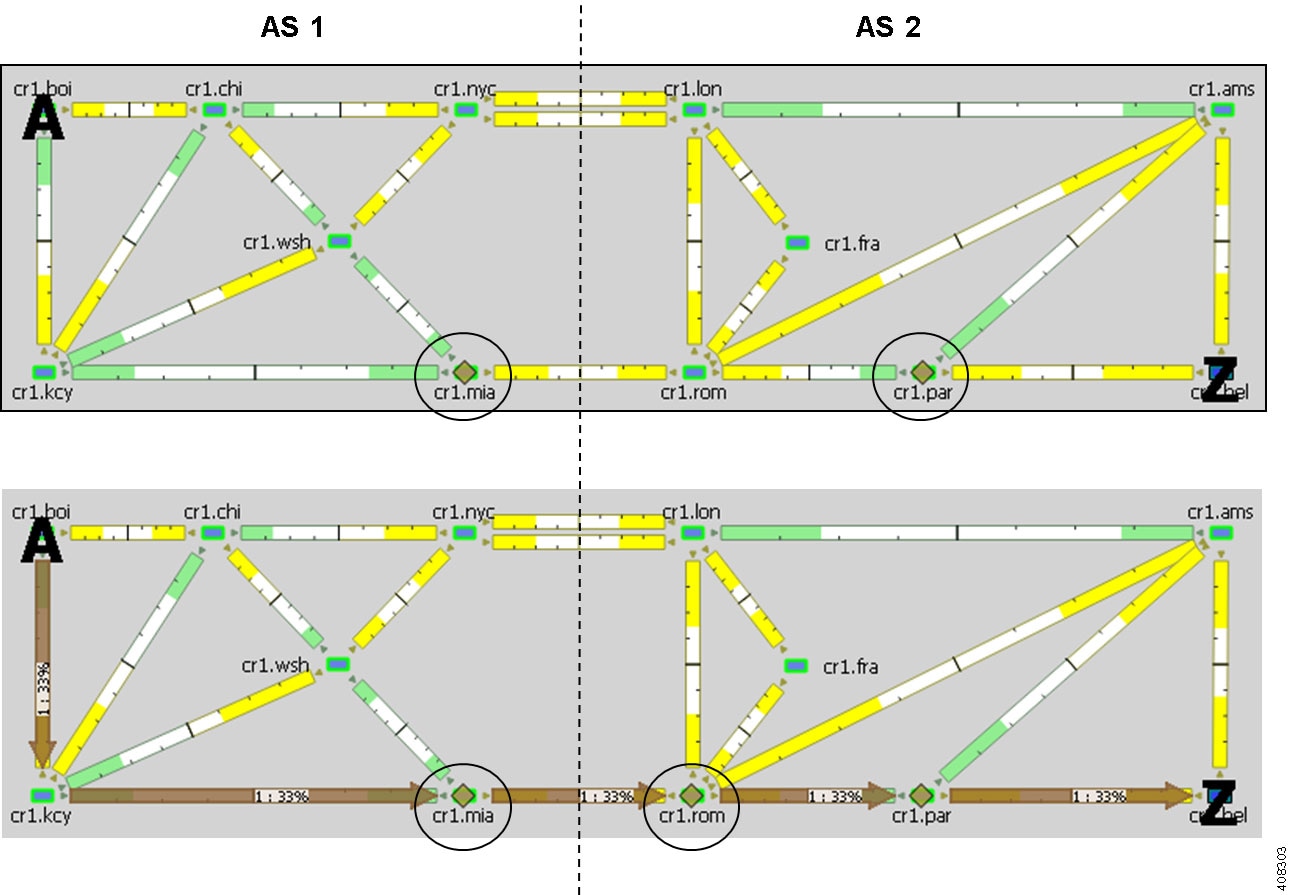 Example: Figure 11-9 shows a demand without hops and how it is rerouted using an LSP segment list hop.

Likewise, LSP paths are created in the same way as RSVP-TE LSP paths. Because you are creating them from SR LSPs, the only editable properties are Path Option and Active.

Add the segment list hops in the order in which they are to be followed.

To continue creating or editing a segment, use the following options and then click OK. As needed, choose the site, node, interface, or anycast group.

After the segment list is created, another way to manage segments is to double-click one from the Segment List Hops table. From there you can change the site, node, and interface, but not the sequence.

Enter a unique name to identify the anycast group.

For each node you want to include in or exclude from the anycast group, check the T (true) or F (false) check box. Then click OK.

If the network contains a configurable topology-independent loop-free alternate (TI-LFA), you can simulate SR-TE tunnels before and after convergence.

To see the simulation before convergence, you must be in Fast Reroute mode (choose Edit > Network Options; in the Simulation Convergence Mode area, choose Fast Reroute). In IGP and LSP Reconvergence mode, you can only see the after-convergence routes.

For each SR tunnel in a plan file, and for each SID in the path, WAE Design determines the no-failure route.

WAE Design derives the post-convergence path from the local node to the next SID hop with the subject circuit removed from the topology.

WAE Design follows the derived after-convergence path hop by hop until it reaches the next SID hop. (If a failure occurs along the way, the SR FRR and the SR LSP do not route.)

When WAE Design reaches the next SID hop, it returns to the normal path state and resumes following the no-fail path to the SID hop.

WAE Design routes to each segment list hop through the IGP shortest path under all failure conditions.

An SR LSP might be routable before convergence through a TI-LFA, but unroutable after convergence.