The WAE Design virtual private network (VPN) model is a representation of a virtual subnetwork within the plan file. Viewing and simulating VPN within WAE Design facilitates many network tasks and can answer questions, such as:

There are many varieties of VPNs. For example, there are Layer 2 (L2) VPNs and Layer 3 (L3) VPNs, each with different categories within it, and there are vendor-specific VPN implementations. Each VPN type has its own specific configuration and terminology. The WAE Design VPN model supports a number of these VPN types based on either route-target or full-mesh connectivity.

WAE Design VPN topology route connections are established through route targets (RTs) or through a full mesh of VPN nodes. The Connectivity property is set in the VPN Properties dialog box.

A demand is associated with a VPN, meaning it carries traffic for that VPN, if the following is true:

Once demands are associated with the VPN, this configuration simulates the associated access circuits exchanging traffic as if they were on the same LAN.

Note that a demand associated with a VPN can additionally contain other traffic that is for that VPN.

Each VPN consists of a set of VPN nodes that can exchange data within it. VPNs have three key properties that uniquely identify them and define how the traffic within them is routed:

– Full Mesh—Connectivity is between all nodes in the VPN. WAE Design ignores the RT Import and RT Export properties of the VPN nodes.

– RT—Connectivity is based on the RT Import and RT Export properties of its VPN nodes.

The VPNs table lists the VPN properties, its associated service class, traffic, and the number of VPN nodes within that VPN ( Table 16-1 ). For information on QoS measurements, see Quality of Service Simulation . For information on the Worst-Case columns not listed here, see Table 16-3 .

Note Because the traffic and QoS calculations are based on all interfaces within the VPN for the service class specified for that VPN, the plot view might differ from the table. For example, the plot view could show Internet traffic while a VPN carrying voice traffic is selected.

VPNs are not selectable from the network plot; you can only select and filter to VPNs through tables. When selected, all VPN nodes within the VPN are highlighted in the plot (Figure 16-1).

Note Utilization measurements might be different between the tables because the VPN table calculates measurements only for the service class associated with that VPN.

VPN nodes are defined by properties that determine which VPNs the nodes belong to and how the demands are routed. The following are required properties:

To simulate RT connectivity, you must set the VPN Connectivity property to RT and then set the RT Import and RT Export properties on the individual VPN nodes within it.

The VPN Nodes table lists the VPN node properties, as well as columns that identify the VPN nodes’ relationship within the VPN and its traffic ( Table 16-2 ).

VPN nodes are not selectable from the network plot; you can only select and filter to them through tables.

Once selected from the VPN Nodes or VPNs tables, the associated site and the nodes within that site appear with a green circle on it (Figure 16-1).

Figure 16-1 VPN Nodes Within a VPN

This example illustrates a scenario where the Acme manufacturing company has three offices, but permits the two branch (er1.par and er1.fra) offices to exchange data only with headquarters (er1.lon). 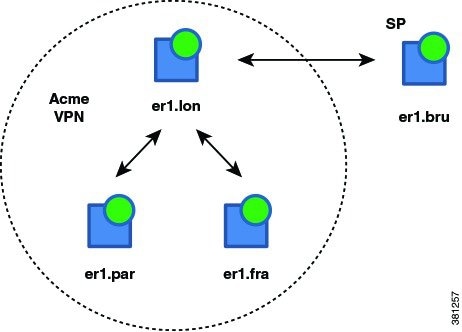 Additionally, headquarters communicates with an SP VPN node (er1.bru) that is not in the Acme VPN. Figure 16-2 shows the footprint of the Acme VPN and the RTs set for all VPN nodes in this example.

In turn, each branch office is set to the Acme VPN, with a Type of L3VPN.

All three of these other VPN nodes import it (both offices and the SP VPN node).

Because the SP VPN node (er1.bru) is not in the Acme VPN, its communication with er1.lon is not within the context of that VPN. 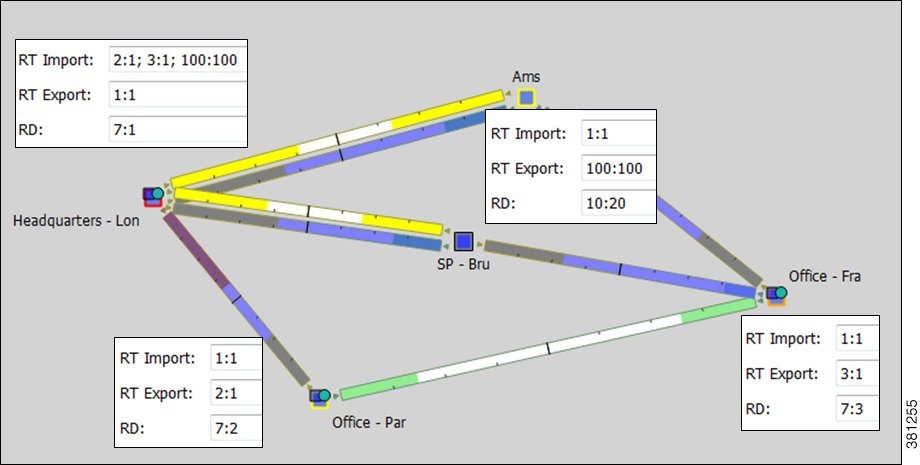 Each of the offices and the service provider VPN node have only 1 in the Total Connect column because they each exchange data only with (have RT pairings with) headquarters.

Each office has 1 in the VPN Connect column because it communicates with only one VPN node in the same VPN.

The service provider VPN node (er1.bru) has 0 VPN Connects because it does not reside in a defined VPN.

Step 3 Choose a VPN type or enter a string value for a new one. The defaults are VPWS, VPLS, and L3VPN.

Step 4 In the Name field, enter the name of the VPN node, which does not have to be unique.

Step 5 From the VPN drop-down list, choose the VPN to which you are adding this VPN node. If you do not see the VPN that you expect to see, verify that you correctly chose the type.

Step 6 (Optional) Enter a description that identifies the VPN node. For example, a customer name might be helpful.

Step 7 If the Connectivity for the VPN is RT, enter the applicable route targets in the RT Import and RT Export fields. All VPN nodes with the same import RT as another VPN node’s export RT can receive traffic from that VPN node. Those VPN nodes with the same export RT as another VPN node’s import RT can send traffic to that VPN node.

Step 8 (Optional) Enter a route distinguisher in the RD field.

When you create VPNs from existing VPN nodes, all VPN nodes are assigned to these newly created VPNs and the existing VPNs become empty. This is because VPN nodes can belong to only one VPN at a time. 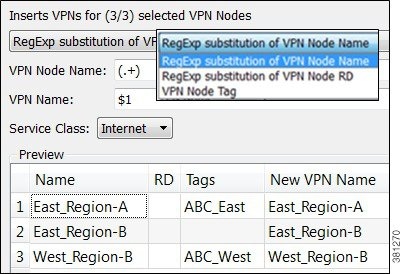 Step 1 If you are creating a VPN for specific nodes, choose VPN nodes from the VPN Nodes table.

Step 3 From the drop-down list, choose the method for creating the VPN: VPN node name, RD, or VPN node tag.

If your convention is to use the same VRF name or the same service ID for every VPN node, this default works well. If, however, the VPN name is encoded in the VRF name or service ID, use a regular expression to isolate the part of the VPN node name that is to be used.

Example: By adding characters before or after the parenthesis, you can create a set of VPNs that are similar to VPN node names.

Results in one VPN: AKD

Step 5 To see a list of VPN nodes that will be included in the VPN and the VPN names being created, click Update Preview .

Step 6 Choose the service class for the VPN and click OK .

Step 2 Enter a unique name for the VPN.

Step 4 Choose the service class for the VPN.

Step 1 Right-click one or more VPN nodes in the VPN Nodes table and choose Properties .

Step 2 In the drop-down list, choose the VPN to which you are adding the VPN nodes.