The RSVP-TE Optimization tool ( Tools > RSVP LSP Optimization > RSVP-TE Opt ) creates explicitly routed LSP paths to optimize route properties such as distance, TE metrics, utilization, and disjointness. The routing decisions are centralized within the tool, in contrast to traditional RSVP-TE routing, in which routing decisions are distributed across the head-end routers in the network. Although it has fewer parameters, this tool is faster and has a more predictable run-time than the Explicit LSP Optimization tool and is the recommended method for explicit RSVP-TE LSP path optimization.

The primary optimization goal is to minimize path distance (which can be based on interface TE metrics, delay, or user-defined value), while not exceeding a bandwidth bound defined for each interface so as to avoid congestion. Unlike RSVP-TE, LSPs are routed even if they cannot avoid exceeding bandwidth bounds for certain interfaces, though these bound violations are minimized. Additionally, you can use this tool for reoptimizing and reconfiguring RSVP-TE LSPs after events, such as network failures and subsequent route reconvergence.

You can specify different treatment for different LSPs: whether the LSPs should be rerouted to shorten the path distance, only as necessary to reduce congestion, or not optimized at all. These three LSP groups are called Opt, Fit, and Fix. Using these input parameters allows for a variety of use cases, such as:

Upon completion, WAE Design generates a new plan file with a suffix, which by default is RSVPTEOpt . This suffix is configurable in the “New plan for result” field. As such, the tool is beneficial for offline planning and configuration of an explicitly routed RSVP-TE network. It is also useful for providing routing decisions for a centralized, reactive network control application, such as can be implemented on the WAE platform.

This optimized plan file opens showing the LSPs table filtered to the rerouted LSPs. Saving this plan file then simplifies the process of identifying which LSPs to reconfigure in the network.

The RSVP-TE Optimization tool uses the LSP and interface input properties listed in Table 20-1 to execute its optimization calculations. These properties, which are specified in user columns in the LSPs and Interfaces tables, can be created in one of two ways:

Example: If you choose LSPs to optimize, to fit, and to fix, the tool creates the RSVPTEOpt::Group column in the LSPs table and sets this property to the appropriate values for each LSP (Opt, Fit, Fix). If the property already exists, it is updated with the new value if it has changed.

Example: If you select to set the interface bandwidth bound based on the Resv BW property, the tool creates the RSVPTEOpt::BWBound column in the Interfaces table and for each interface, copies the Resv BW value to it. If the property already exists, it is updated with the new bandwidth bound value if it has changed.

To determine how and whether LSPs are optimized, select them from the Specify LSP Groups area. If an LSP is in multiple groups, the first group in which it resides is how the LSP is treated.

Setting all LSPs to this option is useful when trying to achieve global optimization on all LSPs.

This option is useful when attempting tactical congestion mitigation, where it is desirable to move as few LSPs as possible to remove existing congestion. 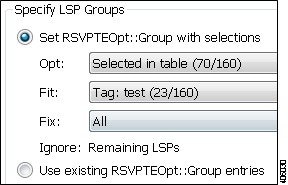 LSPs that are not selected are ignored, and as such, maintain their original configuration and are not considered in the optimization calculations. This can be useful if you have network regions that do not interfere with optimizations. Note, though, that if measured interface traffic is used in the optimizations, traffic contributions from the ignored LSPs to this measured traffic might affect the results.

Because you can set each of the “Set RSVPTEOpt::Group” selections to None, All, only selected, or tagged LSPs, you can section off specific LSPs for one optimization treatment or another.

Example: Tag new LSPs and set them to be optimized (Opt LSPs). Select and set existing LSPs to Fit LSPs to optimize their paths only as necessary to accommodate bandwidth bound constraints. 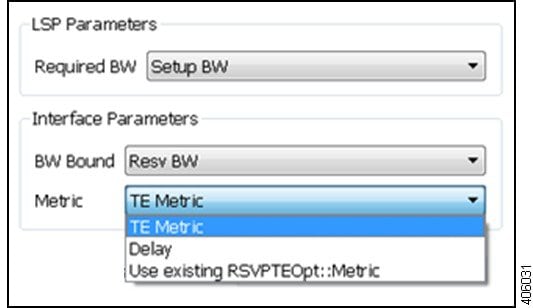 – BW Bound—Specify how much bandwidth the interfaces have available to carry LSPs. WAE Design tries to route LSPs without surpassing this bound, but exceeds it if necessary. 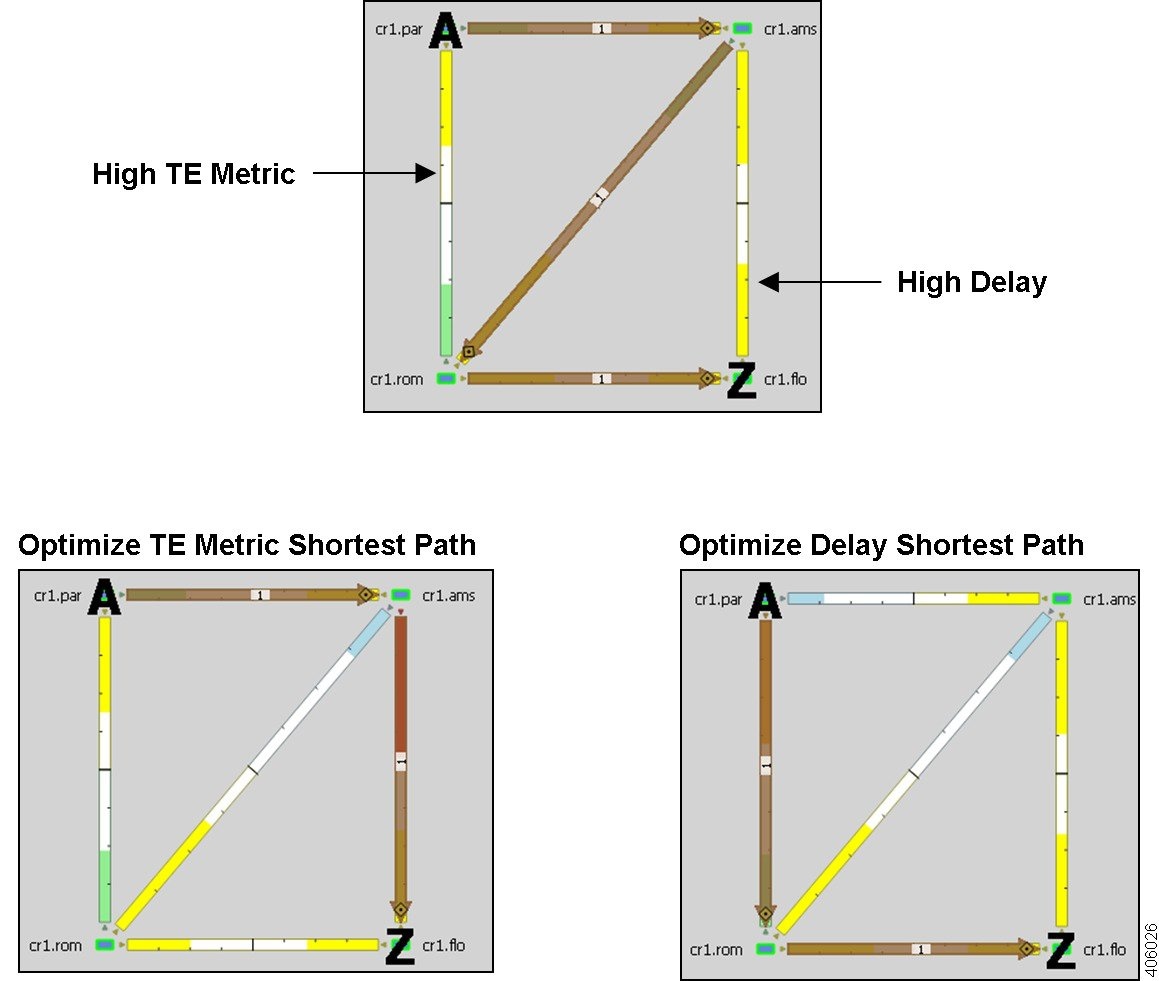 In the Advanced tab, you can create disjoint paths or use existing disjoint paths as follows. Note that two LSP paths are disjoint if they do not route over common objects. These objects are configurable and can be circuits, nodes, sites, SRLGs, or L1 links.

The Post Optimization options identify how to reset the Setup BW for modified LSPs:

In addition to creating the input parameters, as described in Optimization Input, the tool generates the properties listed in Table 20-2 . These properties provide further insight into the optimizations.

The optimized LSPs are reconfigured with the following parameters:

WAE Design writes a report containing the results of the optimization. To access this information, choose Window > Reports .

The report summarizes the results of the optimization, such as how many LSPs there are total compared to how many were optimized, as well as how they were optimized. It also summarizes how disjoint priorities were handled and the number of paths that exceed the interface’s bandwidth bound. 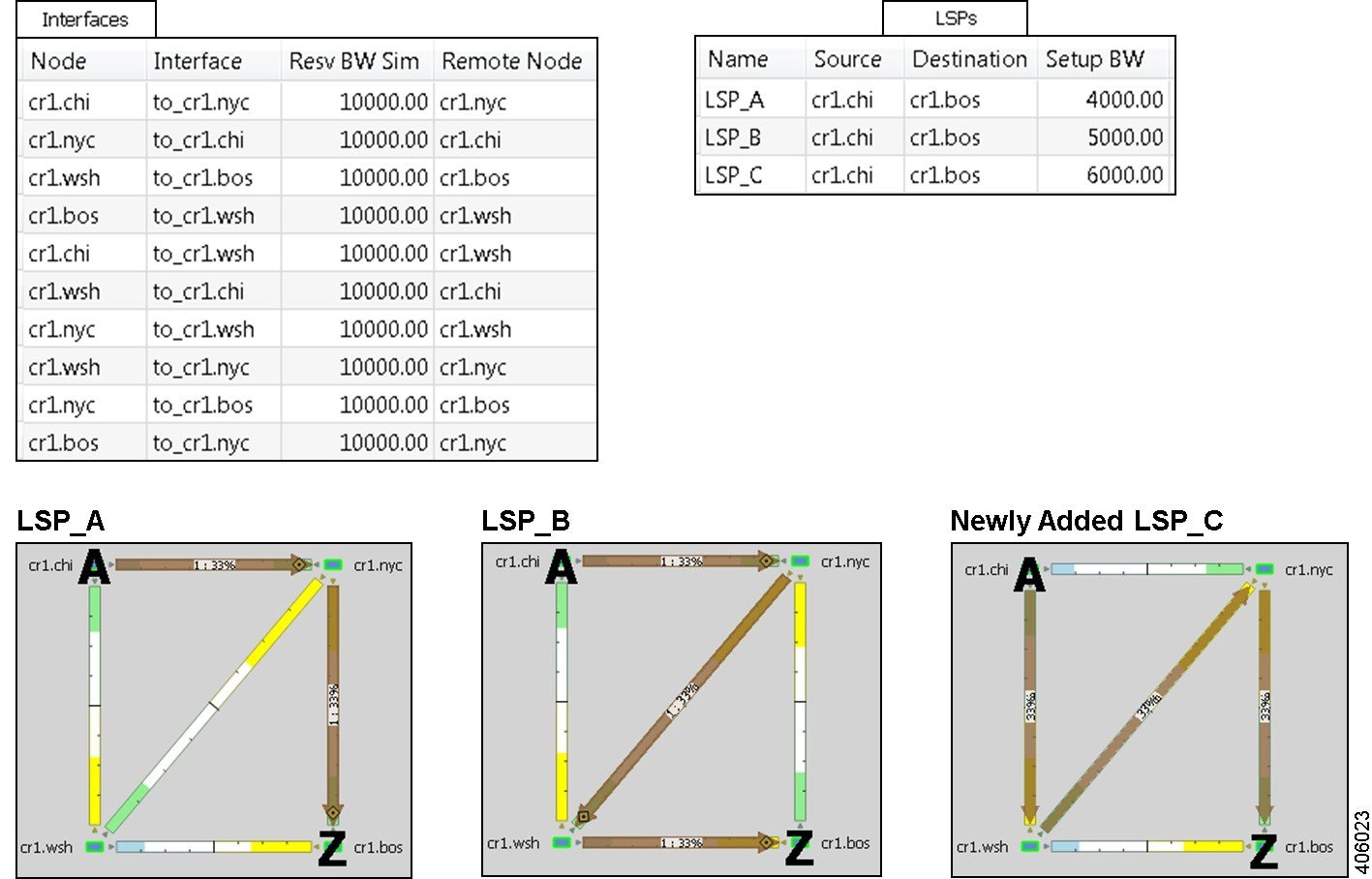 Figure 20-3 shows the results of prioritizing the optimization of the new LSP by setting it to Opt, and setting the other two LSPs to route “as is” by setting them to the Fix LSP group. The LSP Required BW parameter is Setup BW, and the interface BW Bound is Resv BW. While a primary path with explicit hops is created for LSP_C, all LSPs remain on the same route. This demonstrates that LSP_C cannot go on a two-hop path without exceeding bandwidth and it cannot alter this behavior by shifting the other two LSPs around because they are set to Fix. The interface bandwidth bound, however, is not exceeded, which is shown in the RSVPTEOpt::BWBoundExceeded column in the Interfaces table. The LSPs table shows that only LSP_C was updated in the RSVPTEOpt::Action column, and that neither LSP_B, nor LSP_C are on their shortest path. Notice also in the LSPs table that the Setup BW values are reset to 0, which is the default behavior, and that the RSVPTEOpt::Group shows how each LSP was considered during the optimization (Fix or Opt).

Figure 20-4 shows the results of an alternative optimization where all three LSPs are set to Opt. The resulting plan file shows both LSP_B and LSP_C were optimized to route on shortest paths without exceeding bandwidth bounds.

Figure 20-3 Example: No Optimization Improvements When Setting New LSP_C to Opt and All Other LSPs to Fix 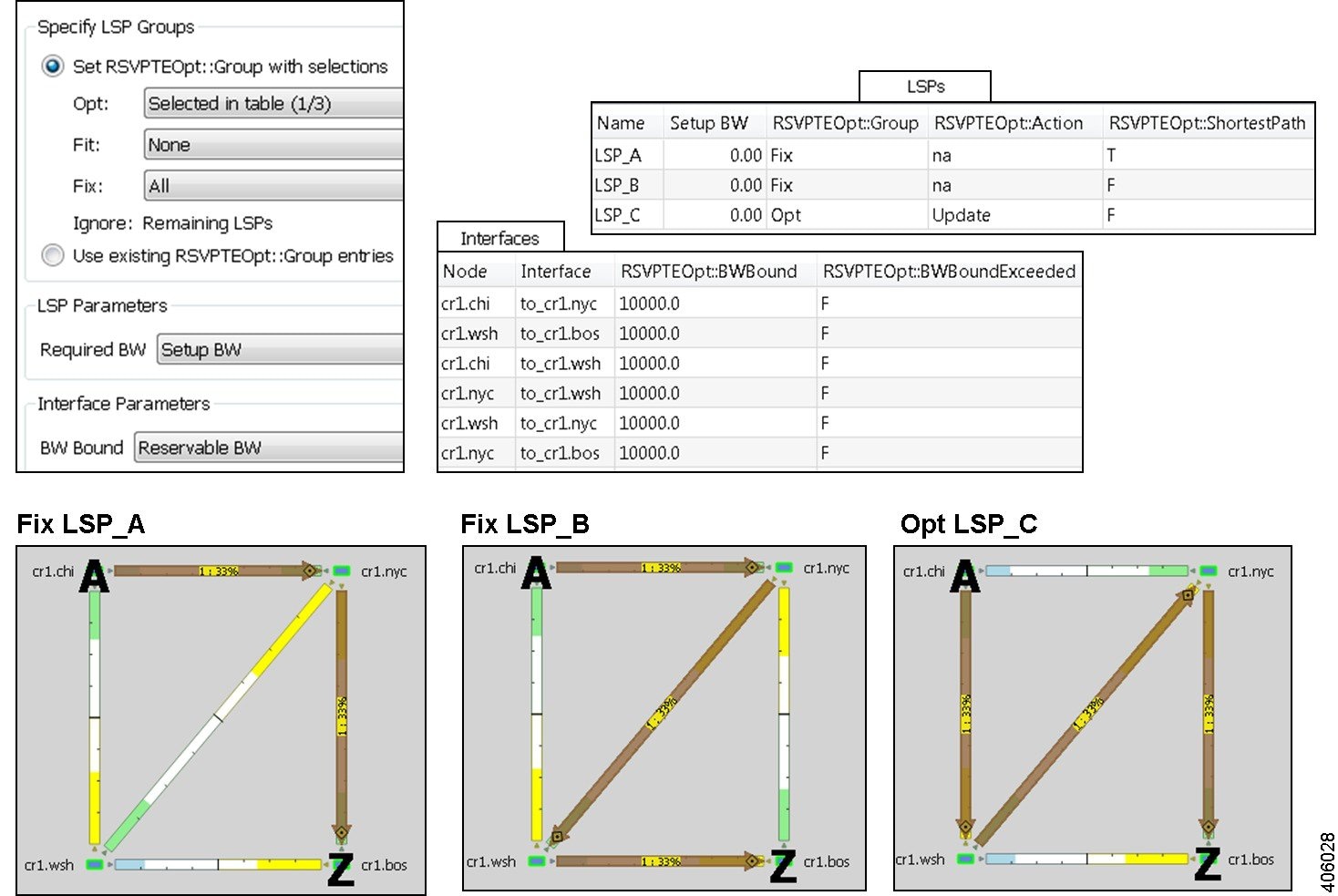 Figure 20-6 shows an optimization run to set this high-Setup BW LSP_C to Opt and keep the other LSPs set to Fix. This results in congestion and leaves three interfaces exceeding their bandwidth bound.

An alternative is shown in Figure 20-7, where congestion is reduced by running the optimization to set LSP_C to Opt, while setting the other to LSPs to Fit. This lets WAE Design adjust the routes of the other LSPs to achieve the best optimization possible (lowest shortest-path metric with the least congestion). While both LSP_B and LSP_C route on two hops now, two interfaces still exceed their bandwidth bound, though the amount of congestion is significantly less. Note that the same result would be achieved if all three LSPs had been set to Opt. 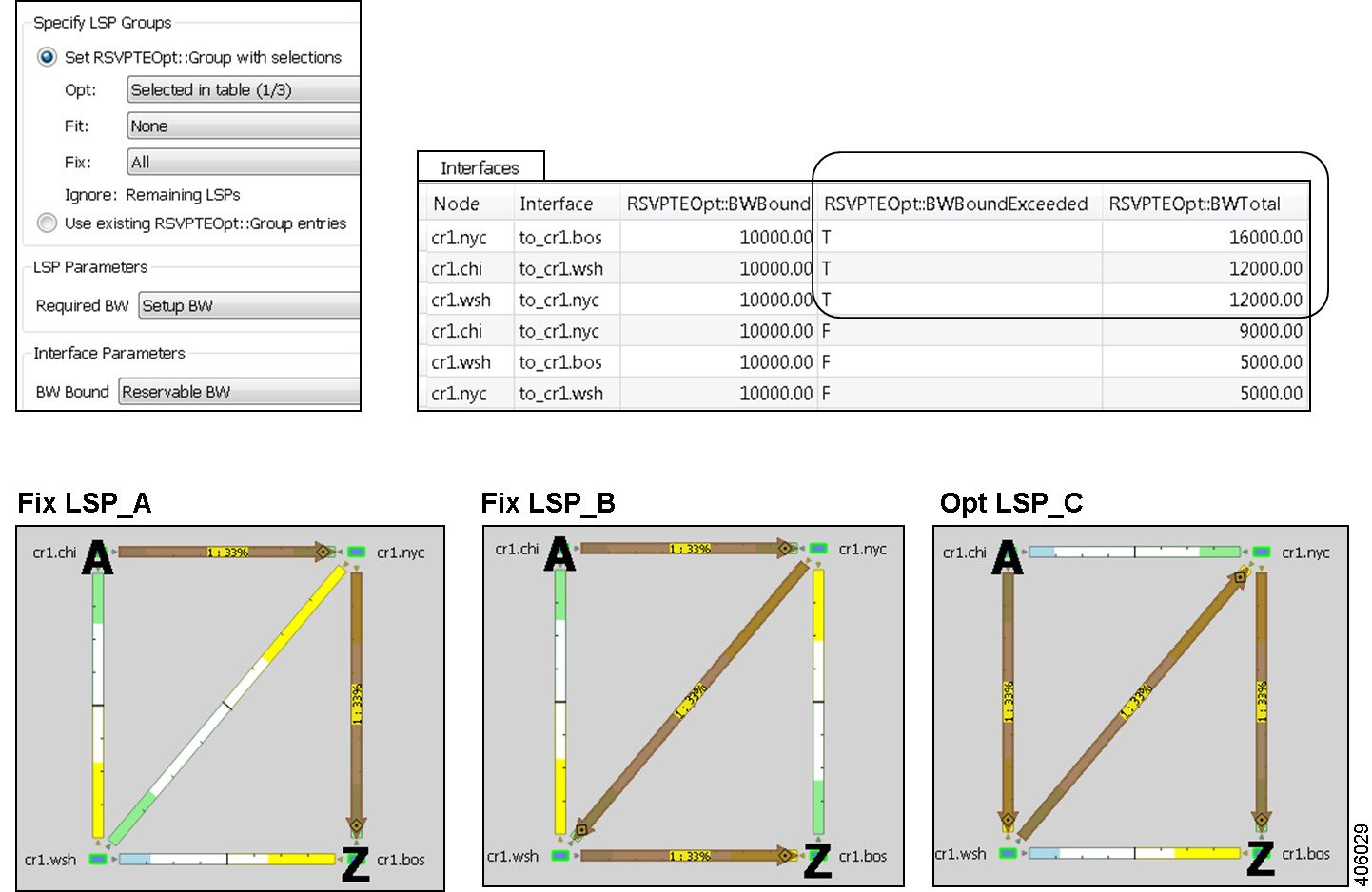 Step 1 If this is the first time using the tool and if you want to use your own preconfigured RSVPTEOpt properties, you must manually edit the LSPs and Interfaces tables to create them.

Step 2 If creating disjoint paths between LSPs in the same disjoint group, the LSPs must first be added to the disjoint groups in the LSP Properties dialog box. Here, you can also assign priorities to LSPs within these groups. Higher priority LSPs are assigned shorter routes based on the metric being used for shortest path calculations. The higher the number, the lower the priority.

Step 3 If using tagged LSPs, create those tags. For information on how to create tags, see Plan Objects .

Step 4 If running the optimization based on selections, select those LSPs.

Step 6 In the Specify LSP Groups area, make selections for optimizing LSPs based on Opt, Fit, or Fix LSP groups, or based on those defined in the RSVPTEOpt::Group property.

Step 8 In the BW Bound field, set how much bandwidth the interfaces can carry.

Step 9 In the Metric field, specify on which property to base the shortest path.

Step 10 (Optional) Specify the name of the resulting plan file.

Step 12 Identify whether to create disjoint LSP paths and if so, how you want them defined.

Step 13 Specify whether to reset the LSP bandwidth after the optimization, and if so, how so.