WAE Design provides basic cost modeling of network plans. Costs are specified for nodes and circuits, and these can be used to approximate infrastructure costs for the network or parts of the network. This allows for quick assessments of the costs of various upgrade alternatives, as well as for greenfield build-outs.

The specified circuit costs can also be used to estimate demand and demand grouping costs. This is the cost of routing traffic between particular locations or sets of locations in the network, taking into account the amount and cost of the circuit infrastructure used. This can be used to assess the cost of a customer, a particular service, or any other defined traffic source on the network.

An Infrastructure Cost report can help you approximate the total monetary cost of a network design based on estimated costs assigned to nodes and circuits. These costs are calculated from initial costs and per-period costs, where per-period costs are amortized based on the specified number of periods and interest rates. The report gives an infrastructure cost based on sums of all node and circuit costs, as follows: 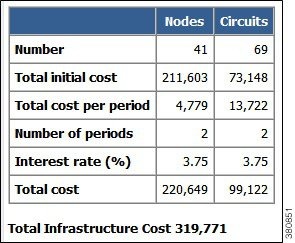 Costs are based on any combination of Cost Initial and Cost Per Period properties that are assigned to nodes and circuits. A typical use case is to set nodes with an initial cost to identify the initial capital investment and to set circuit costs per period to analyze the operational cost of leasing circuits over time.

You can set these properties manually. For circuits, you can also use the Cost Circuit Initializer to set the costs automatically based on circuit distance and capacity.

The total cost for each node and each circuit appears in its respective Cost Initial or Cost Per Period column in the Nodes table and Circuits table. The sum total of the node and circuit costs appears in the output of the Infrastructure Cost report and is used in its calculations.

An easy way to see totals—as well as average, minimum, and maximum costs—without running the report is to right-click the Cost Initial or Cost Per Period column heading. 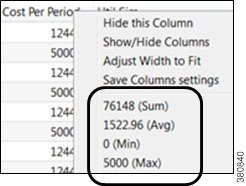 You can set these properties manually, as follows.

Step 3 Enter values in the Cost (initial) field, Cost (per period) field, or both, and click OK .

The Cost Circuit initializer offers an automated way of setting circuit costs. For example, it lets you set realistic per-period circuit costs based on distance, capacity, or both.

The total cost for each circuit is the sum of the fixed cost plus the variable cost, where the variable cost is the result of multiplying the per-unit cost times the units selected (distance or capacity). 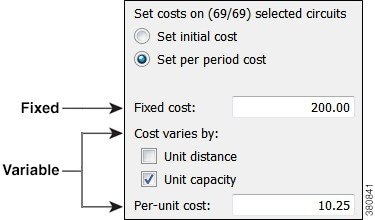 To access this initializer, choose Initializers > Circuit Cost . Options are as follows:

Example: This example sets a per-period cost for a circuit that has a fixed cost of 250, a per-unit cost of 2, circuit distance of 850, and a capacity of 1000. Including all of these options in the calculation, the cost of this circuit is: 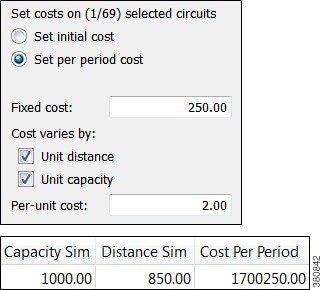 To create an infrastructure cost report, follow these steps. 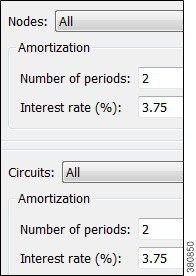 Step 1 For any node or circuits you want included in the report, set their initial or per-period costs. For more information, see Setting Cost Properties.

Step 2 If creating a report for selected nodes or circuits, select them before opening the report dialog box.

a. Select whether to include all nodes, selected nodes, or specifically tagged nodes.

b. If you are calculating per-period costs, set the number of periods and the interest rate.

Using tags is a convenient way to determine costs for a specific region of the network or for specific customers.

a. Select whether to include all circuits, selected circuits, or specifically tagged circuits.

b. If you are calculating per-period costs, set the number of periods and the interest rate.

This example shows the generation of an Infrastructure Cost report based on a specific set of nodes and circuits, both tagged as the East Region. It sets initial costs on the nodes and per-period costs on the circuits based on their distance. The report is for 4 periods, and the interest rate is 5%.

a. Filter to the nodes containing the East Region tag.

The Nodes table lists these costs in the Cost Initial column. Right-click this column heading to see the total Cost Initial for all of these nodes (here, 30,000). Because we are only interested in initial node costs, this is the same value that the Infrastructure Cost report shows for total initial node cost. 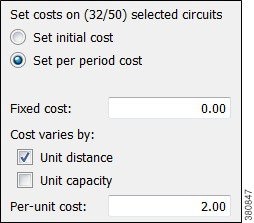 a. Filter to the circuits containing the East Region tag, and select these circuits.

The Circuits table lists these costs in the Cost Per Period column. Right-click this column heading to see the total Cost Per Period for all of these circuits. Here, it is 35,063.46, and this is the number that is amortized in the Infrastructure Cost report based on 4 periods with a 5% interest rate. 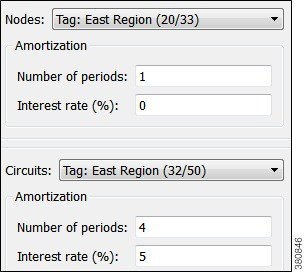 Step 4 Now that costs are set up for the region, generate the Infrastructure Cost report.

b. Select the East Region nodes and circuits.

c. Because there are no per-period costs for nodes, no further node options are set.

The resulting report performs these calculations: 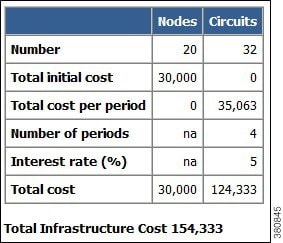 Two estimates of the monetary costs of demands are automatically derived when you set per-period costs for circuits, as follows. These appear as the following column headings in the Demands table:

It is divided by two to share the circuit cost between the costs of traffic in two directions.

Where demand utilization on the interface = (Interface Utilization / Capacity)

Where demand utilization on the interface = (Interface Utilization / Capacity)

If there is only one demand through the circuit, the full cost of that circuit is allocated to that demand. 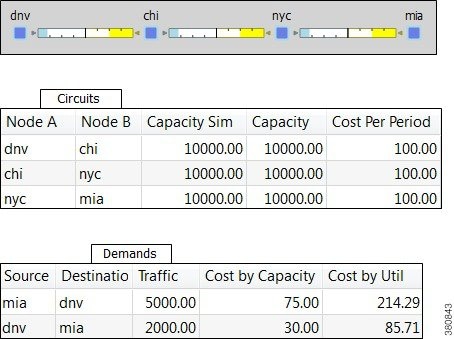 The Cost by Capacity calculation is as follows:

The Cost by Util calculation is as follows: