All simulations use demands. For detailed information on demands, see Traffic Demand Modeling .

By default, IS-IS interfaces are assigned to Level 2, though you can assign them to Level 1 or to both Levels 1 and 2. (For instructions, see Setting IS-IS Multi-Level Simulation.)

Step 1 Choose one or more interfaces. Right-click one and choose Properties , or double-click an interface.

a. In the IGP area, select the level from the ISIS Level drop-down list.

b. In the Level 1 Metric field, enter the metric, and click OK .

If EIGRP Delay is not set, WAE Design uses 10 as the delay in the preceding calculation, which means 10 "10s of microseconds.” 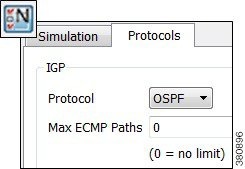 Step 3 In the Max ECMP Paths field, enter the maximum number of ECMPs. A 0 (zero) means there is no limit.

Step 1 Select one or more interfaces, demands, or LSPs from their respective tables.

Step 2 Right-click one of the selected objects and choose Properties .

Step 3 Select the desired topology or topologies, as follows.

Because WAE Design updates all metrics on all selected interfaces, you can modify interfaces individually or in groups. For example, you might select all core routers in the Interface table and then simultaneously calculate their IGP metrics.

Step 3 Enter a multiplier and minimum value. Then click OK .

The Shortest Paths table is dynamically generated to show routes that traffic would take between selected nodes or between all nodes in selected sites. Columns include information about the total IGP metrics used in the routes, as well as numerous latency columns. Because shortest paths are not objects in the plan file, there is no associated Properties dialog box. You can, however, right-click paths to filter to interfaces or to source and destination nodes to change their properties, as needed, to change the path.

To view these shortest paths in the network plot, select them from the table (Figure 8-1) using the following steps.

Note Filtering to the shortest IGP Path between two nodes when EIGRP is used does not show the shortest EIGRP path. Rather, its shows the shortest path using the traditional IGP metrics for each interface.

Step 3 The Shortest Paths table is populated according to your selections: shortest IGP, shortest TE, or shortest latency. To view a path in the plot, select it from this table. The Type column identifies the path type. 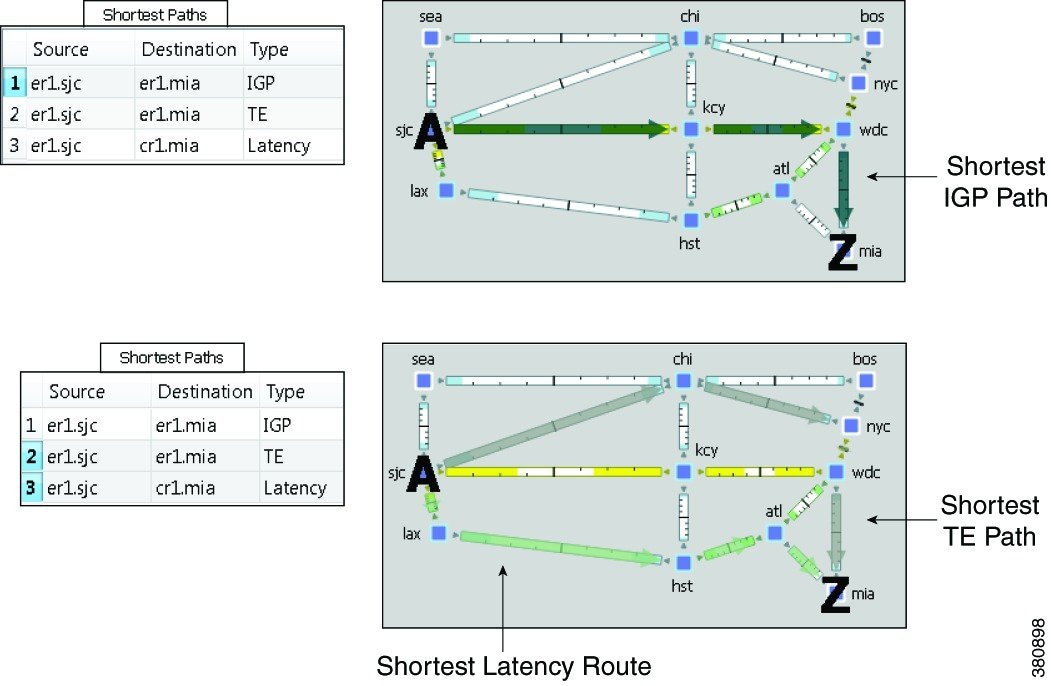 Step 3 Choose the appropriate protocol from the IGP Protocol list.