As demand grows on your network you need a way to address the additional traffic and congestion. To alleviate congestion, you can:

Figure 23-1 shows an example of a network design before optimization, where extra demands were placed on the network. As a result, you can see congested interfaces in purple. 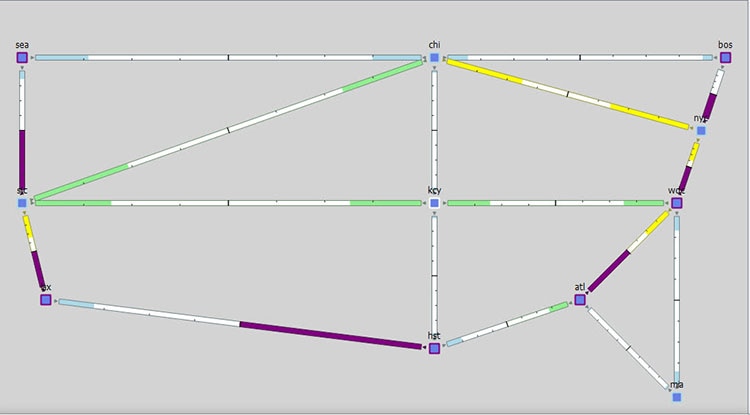 You can set optimization parameters to relieve network congestion and augment capacity. You start by defining a maximum utilization threshold for a specified set of interfaces and then layering additional options that operate on Layer 3, Layer 1, and across failure sets. 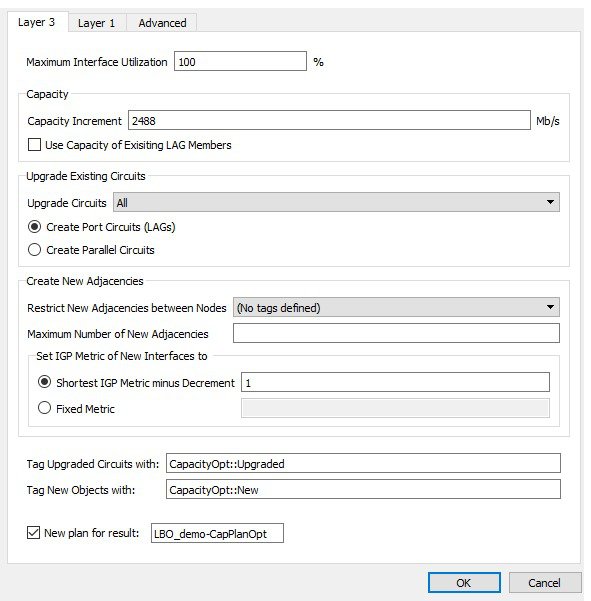 In the Layer 3 tab, define the maximum utilization threshold that you want to use for all interfaces in the network.

Decide on the Layer 3 optimization options to use. (Options are described in Table 23-1 .)

You can specify both the capacity increment and the existing capacity of LAG circuits in tandem.

You can upgrade all existing circuits or a subset of these circuits. If you want to allow the upgrade of just certain circuits, indicate those circuits to be modified. This is useful if you want to limit your upgrades to a certain geographical location in the network.

To create new port circuits or parallel circuits, choose one of the following options:

Create new parallel circuits. In this case, the optimizer creates new circuits that are parallel to existing circuits.

Choose all the nodes in the table or just a subset of the nodes that you want to optimize.

You can apply the IGP metric to new adjacencies, but not to parallel circuits.

Specify the IGP metric type for new interfaces, which can be either:

Decrement (default): The metric of new interfaces is equal to the shortest path minus the value specified in the metric option.

Fixed: The metric of new interfaces is equal to the value specified in the Fixed Metric field.

(Optional) On the Advanced tab, choose options to provide additional capacity planning and describe the cost for the various elements in your design.

(Optional) On the Layer 3 tab, override the defaults for how circuits are tagged or for how new optimized plan files are named.

WAE Design routes the traffic and looks at the utilization threshold you specified, and any other optimization parameters you specified. After running an optimization, you can look at the summary report to see what the optimizer did to remove congestion. The key metric to look at is the Total Capacity Added (Mb/s).

Figure 23-2 shows the design after optimization using the parameters specified in Step 1. In this case, the optimizer proposes to set up two new adjacencies:

The Reports window provides a summary report and a capacity upgrades table.

After running the optimization, the summary reports provide useful metrics at a glance. Using the previous design as an example with the default utilization threshold of 100%, the decrement interface metric type, and unbounded adjacencies, this report provides details on the: 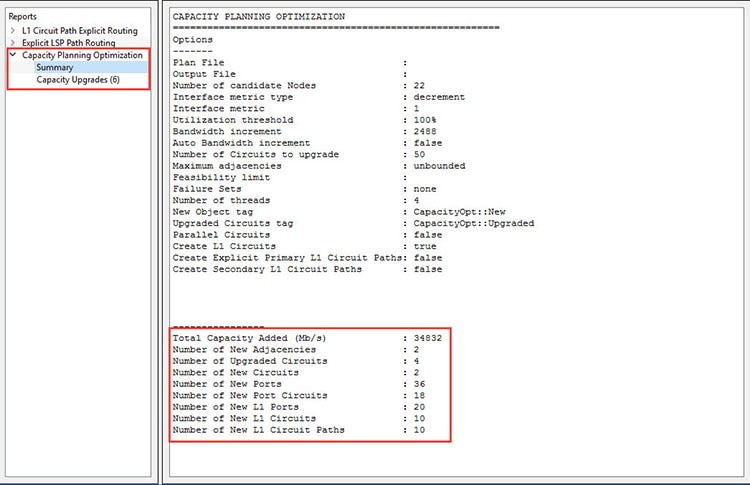 Click Capacity Upgrades for details on how the optimizer upgraded circuits. Using the previous optimized design as an example and using the default utilization threshold of 100%, the decrement interface metric type, and unbounded adjacencies, this report provides details on the six circuit upgrades that it suggests to meet your optimization parameters.

In this example, out of the six upgrades listed, there were two new port circuits created for each upgraded circuit.

You have several Layer 3 options for capacity planning. These parameters tell the optimizer what your preferences are in terms of utilization thresholds, capacity increments, and whether to upgrade existing circuits, create new adjacencies between nodes, create port circuits, or create parallel circuits.

Because the utilization threshold was set to 100%, utilizations over 90% (shown in red) are acceptable solutions.

If you know exactly where you want to place L1 circuits, you can use explicit routing. To simulate optical restoration capabilities, you can create secondary L1 circuit paths.

In the Capacity Planning Optimization tool, click the Layer 1 tab.

(Optional) Specify whether you want to use explicit routing, create secondary L1 circuit paths, or both. See Table 23-2 for the Layer 1 options.

(Optional) In the Feasibility Limit field, enter a positive number.

The optimizer takes into account the feasibility limit of each Layer 1 circuit path; that is, how far it can travel and what impairments it can suffer.

Because of the feasibility limit, the optimizer might, for example, recommend adding five 10-GB circuits instead of a single 100-GB circuit.

(Optional) In the Acceptance Threshold field, enter a positive number. Lower thresholds increase the risk that the L1 circuit path is not feasible in the network. The default is 3.

Use the advanced options to:

In the Capacity Planning Optimization tool, click the Advanced tab.

When you run an optimization, the tool generates a report on the overall cost—including the cost of the added ports—and recommends the most cost-efficient solution.

In the Failure Sets area, choose options that you want the optimizer to consider (circuits, nodes, sites, and so on). Entries appear dimmed if they are not available in your design plan.

This action creates the capacity planning optimization report showing the results of the increased capacity. The optimizer takes into account whether it makes sense to upgrade existing circuits or set up new adjacencies, and considers capacity increments, cost options, and feasibility limits.