One common use case for this optimization is that disjoint LSPs can ensure services are highly resilient when network failures occur. For example, this tool lets you route LSPs to have disjoint primary and secondary paths that are optimized to use the lowest delay metric possible.

If it is not possible to achieve the optimization as defined by the routing selection, path requirements, and constraints, the tool provides the best disjoint paths and optimization possible.

Upon completion, WAE Design tags the LSPs with DSJOpt and generates a new plan file with an -DSJopt suffix. WAE Design also writes a report containing the results of the optimization.

Note While the optimizer applies to both RSVP LSPs and SR LSPs, only one of these types of LSPs can be optimized at a time.

The disjoint path requirements identify the priority for creating disjointness across a path. Disjointness priorities 1, 2, 3, and Ignore are available for circuits, SRLGs, nodes, sites, and L1 links. The tool tries to create disjointness for all objects that have a priority set other than Ignore. If full disjointness cannot be achieved, the tool prioritizes disjointness based on these values.

This example shows how disjoint routes can be created for primary and secondary RSVP LSP paths, and how those routes differ, depending on the path requirements set.

The LSP has a primary and secondary LSP paths that use the same route from cr2.sjc to cr2.wdc. The LSP is not a member of a disjoint group. 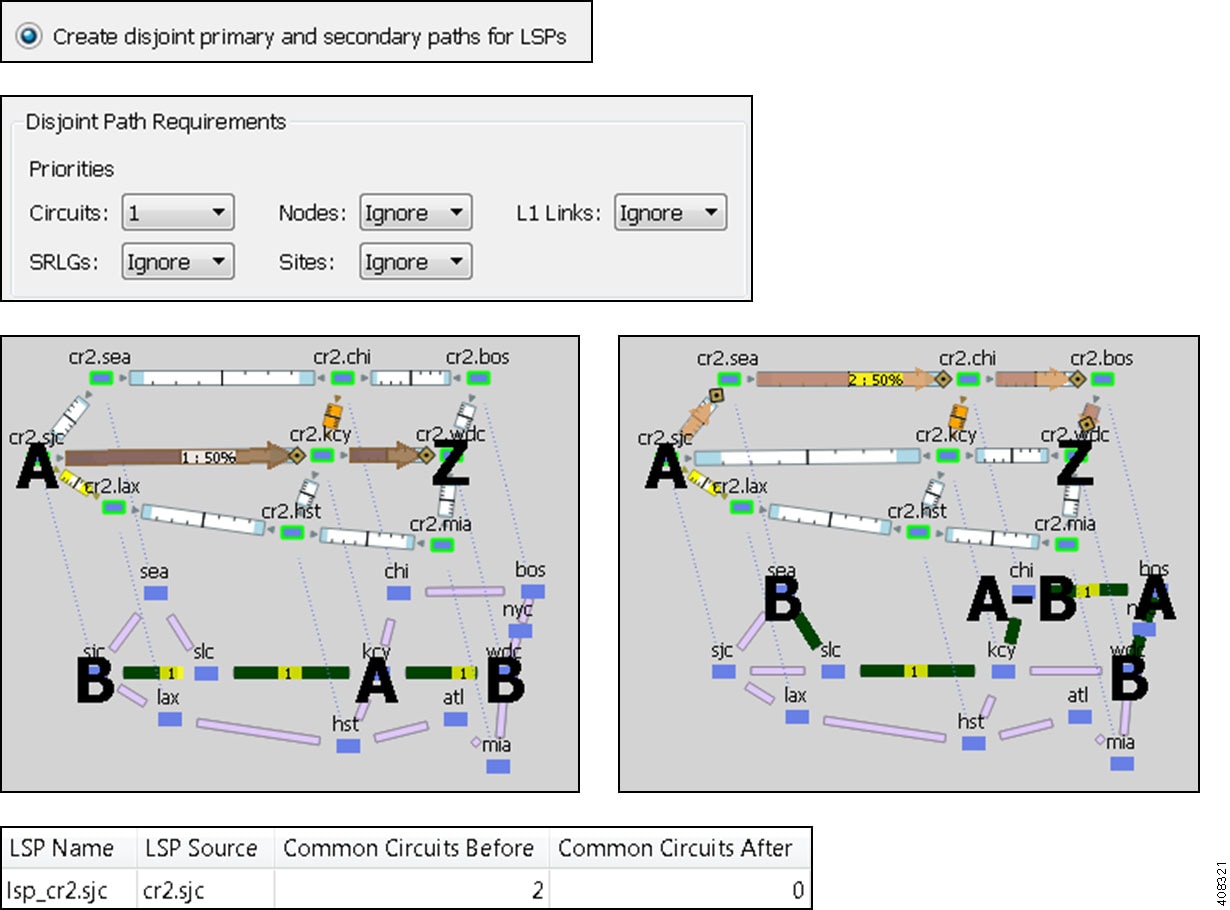 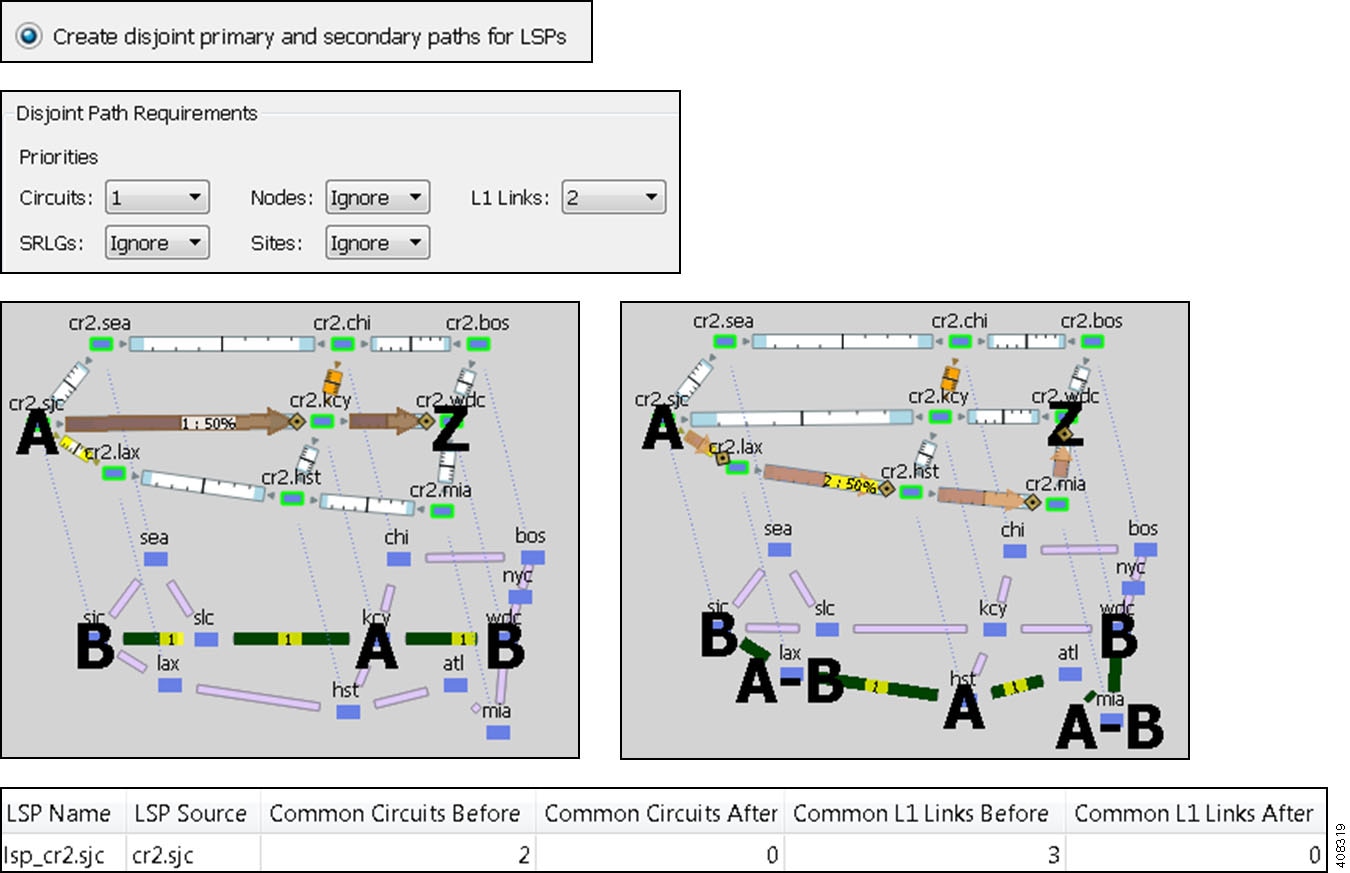 This example shows how disjoint routes can be optimized for two SR LSPs using the same source (sjc) and destination (kcy).

– Before using the LSP Disjoint Path Optimization tool, both LSP paths use the same route. There are no segment list hops.

– By selecting the same disjoint option and using the Delay metric for the shortest path calculation, one LSP is moved away from the high-delay sjc-kcy circuit because traversing that circuit is not the shortest latency path.

Step 1 Right-click one or more LSPs and choose Properties .

Step 4 If needed, assign priorities to LSPs within these groups. Higher priority LSPs are assigned shorter routes based on the selected metric. The higher the number, the lower the priority.

Step 1 Skip this step if using tags. You can also skip this step if you want to run the tool on all SR LSPs and there are only SR LSP types, and if you are not selecting LSP paths to fix.

If you are fixing selected LSP paths or if you are running the optimization on selected SR LSPs, select them before opening the dialog box.

If the table contains both RSVP and SR LSPs, show the Type column to easily sort and find the LSP.

Step 3 Select whether to optimize disjoint paths for all LSPs, selected LSPs, or tagged LSPs.

Step 4 Select how to route the disjoint paths.

Step 7 Specify whether to create and add tags to all SR LSPs rerouted during optimization. You can edit the DSJOpt default.

The LSP Loadshare Optimization tool automates the process of finding and setting the most favorable loadshare ratios across parallel LSPs to balance traffic and avoid congestion. The optimizer only includes interfaces that use parallel LSPs in the optimization. You can further limit parallel LSP interfaces to only those on which you want to drive down the maximum utilization.

Upon completion, WAE Design tags the LSPs with LSPLoadshare and generates a new plan file with an -Lshare suffix. This plan file opens, showing the LSPs table that is filtered to these rerouted (and newly tagged) LSPs. Saving this plan file then simplifies the process of identifying which LSPs to reconfigure in the network. Both the tags and the new plan filenames are editable.

Step 1 Open a plan file and choose one or more LSPs. If you do not choose any LSPs, the tool uses all LSPs in the plan file.

Step 3 (Optional) Choose the LSPs on which you want to optimize the Loadshare value.

Step 4 Choose the interfaces on which you want to drive down utilization:

Step 5 Choose which method of optimization to use:

Step 6 If distributing the traffic to bins, enter the total number of flow bins to use. (See the Bin Example.)

Step 9 (Optional) Choose whether to create a new plan file based on the results, and change how to name it.

The base plan for this example, Acme_Network, contains two sets of parallel LSPs, each with a Loadshare value of 1 and each using strict hops on named paths to reach its destination. All of these LSPs have a Traff Sim of 3000 Mbps. The interfaces to which these LSPs filter all have a Traff Sim value of 3000 Mbps, except for sjc-to-okc, which has 6000 Mbps of simulated traffic (Figure 19-4). 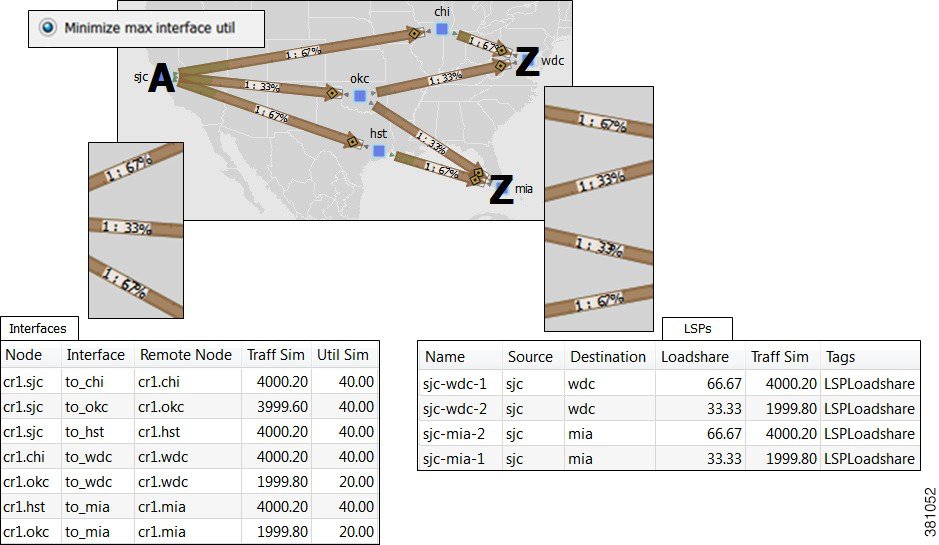 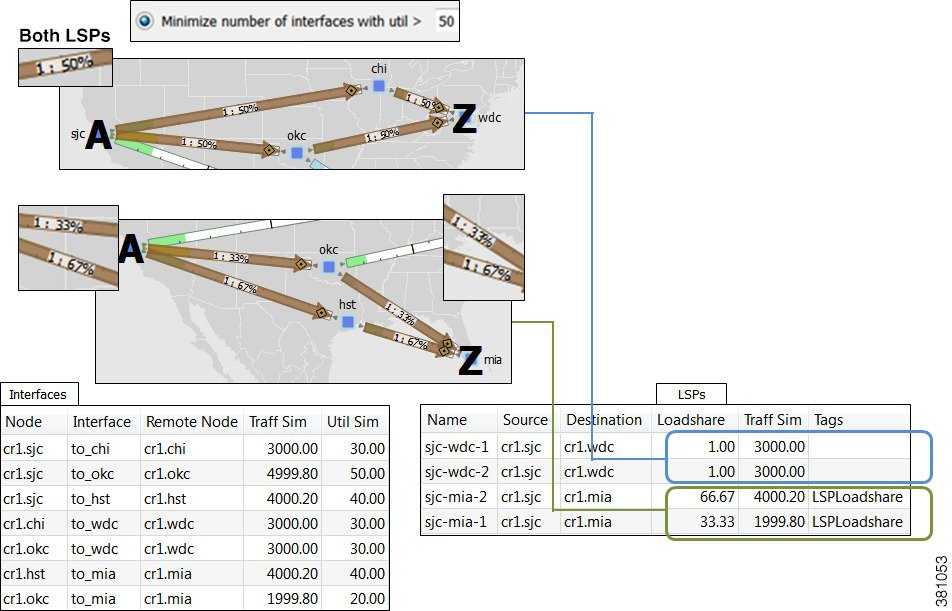 The LSP Setup BW Optimization tool lets you add or remove LSPs based on set bandwidth requirements that you specify. You can select the LSPs that you want the optimizer to consider. The optimizer then separates these LSPs into different groups. The optimizer defines an LSP group based on the fact that the LSPs within the group share common source and destination nodes. You can also specify additional custom groupings to get a finer granularity on the setup bandwidth.

The optimizer lets you create LSPs by specifying:

Additionally, the optimizer lets you remove LSPs by specifying:

You can then perform different operations on each group to test different design scenarios.

Step 3 Choose the manner in which LSPs are separated into LSP groups:

Step 4 For each LSP group, provide your setup bandwidth requirements:

Step 5 (Optional) Override the defaults for how LSPs are tagged (SetupBWOpt) or for how new optimized plan files are saved.

After running the LSP setup bandwidth optimization, the report summarizes the total number of:

In the Reports window, click LSP Groups to view details on how the optimizer operated on LSPs: