Enterprises and service providers alike have used the bandwidth-conserving technology of IP Multicast for years to enable services. As new applications start to use multicast to deploy high-bandwidth and mission critical services, it raises a new set of challenges for deploying IP Multicast in the network. Before addressing these new challenges it is also important to understand the possible deployment scenarios of IP Multicast in enterprise and service provider networks.

IP Multicast in an Enterprise Network:

IP Multicast applications are becoming increasingly popular among enterprises as an essential communications protocol to effectively manage bandwidth and offload application server load by replicating the traffic on the network when the need arises.

With IP Multicast your enterprise can efficiently distribute content and media within your network (Figure1).

●   Broadcast video: Service providers have started to offer TV channels over the existing broadband networks as a value-added service.

●   near-Video on demand (n-VOD): n-VOD is a service that plays a movie or a clip at 10 to 15 minute intervals spread over a range of channels so you do not have to wait more than the minimum interval minutes to watch a movie.

As these services are deployed, the need for IP Multicast for high bandwidth and revenue-generating mission-critical services has raised some of the following challenges:

●   Efficient replication of IP Multicast traffic without a significant effect on performance.

●   Efficient control of IP/TV video traffic in the enterprise and service provider network.

●   Capability of achieving sub-second convergence after failure of a network node or link.

●   Support for efficient mechanisms to provide encryption and quality of service (QOS) for IP Multicast.

●   Ability to easily deploy and manage the network.

●   Faster rollout of standardized features to the field.

The following are the main versions of the PIM protocol supported by Cisco IOS Software, all of which are control plane protocols:

●   Internet Group Management Protocol(IGMP) limit: Customers can enforce a maximum broadcast bandwidth limit by limiting the number of IGMP joins on the ranges of IP Multicast addresses associated with broadcast video to a configured maximum on the aggregation links that the router controls.

●   IP Per Interface Mroute State limit: This feature limits the number of Mroute states on an interface for different access control list (ACL)-classified sets of IP Multicast traffic. You can use this feature to prevent Denial of Service (DoS) attacks, or to provide an IP Multicast CAC mechanism when all the multicast flows use roughly the same amount of bandwidth.

To achieve High Availability (HA), the Cisco ASR 1000 Series Routers are designed to provide both redundant hardware and software components. These components also provide modularity which helps to contain faults so that during failover or restart events, other parts of the system continue to function normally.

●   Cisco ASR 1000 Series SPA Interface Processor (SIP): The SIP is the housing for the shared port adapters (SPA), each SIP can take up to 4 Half-Height SPAs. The SPAs on their own do not play an active part in providing High Availability functionality for multicast services because they provide only the physical network connection and buffering.

The ASR1000 series routers have a physical separation of routing plane (RP) from the forwarding plane (ESP). In a fully redundant 6RU chassis the RP and ESP operate in an active/standby mode. On failover the High Availability works as following:

●   On the active RP Failure, the standby RP takes over and the now newly active RP re-builds the PIM state IGP re-converges to assure uRPF check. The MFIB proceeds to incorporate refreshed PIM state and the active ESP continues to forward multicast traffic based on its version of the MFIB. Forwarding of IP Multicast packets is not disrupted.

●   On the active ESP Failure, the standby ESP takes over and forwarding is disrupted by a momentary packet loss. This can be mitigated by prioritizing multicast traffic over other types of traffic, packet / byte statistics will be lost. After restart, ESP receives state information from active RP via reliable IPC communication.

Figure 4 shows an internal overview of a completely redundant configuration of the Cisco ASR1000 Series Routers. 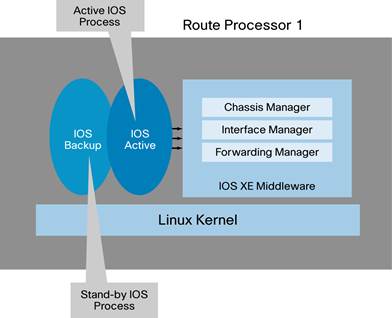 IP Multicast data packets are handled by the Cisco ASR 1000 Series Routers in a similar manner to IP Unicast data packets. They arrive on an ingress interface and are forwarded by the SPA to the ESP for processing. However, the processing within the ESP differs significantly because the multicast packets are replicated in the ESP; the Cisco ASR1000 Series Router uses an efficient replication algorithm to replicate packets.

For Multicast, ESP achieves efficiency in the following ways:

This efficient replication helps ensure that latency and jitter are kept to a minimum for IP Multicast traffic. The ESP provides an efficient and scalable solution to multicast replication without burdening the overall system capacity. Figure 6 illustrates how multicast data is replicated in the ESP.

Benefits of Deploying the Cisco ASR1000 Series Router in an Enterprise and Service Provider Network:

The Cisco ASR1000 Series Routers can help both enterprises and services providers offer services effectively with the following advantages:

●   Service providers face a constant demand for bandwidth at the edge creating the need to be able to effectively oversubscribe links without affecting end-user quality of experience (QoE). Cisco has successfully implemented a CAC mechanism in voice networks with oversubscription. IP Multicast CAC is treated in a similar manner to voice CAC. Before admitting a new call, the new call-flow repercussions that may affect QoE for existing flows are accounted for by using IP Multicast CAC mechanisms. The Cisco ASR1000 Series Routers takes full advantage of existing Cisco IOS Software capabilities to efficiently control IP Multicast traffic using Multicast CAC.

●   Service providers want to securely deploy triple-play services and offer various different service packages to meet individual customer requirements. This kind of service offering also requires allocation of individual IP addresses to each service for each end-user terminal. As IPv4 address space gets exhausted, the need for IPv6 increases. Some carriers are already using IPv6 Multicast for IP/TV deployments. The obvious advantages to service providers is that they do not have to worry about an exhausting IPv4 space and can have the flexibility to assign an IPv6 address to all devices within a end-user home and authenticate each one of these services (data, voice and video) individually. This scenario allows service providers to offer tiered services effectively. The Cisco ASR1000 Series Router is designed for IPv6 Multicast support and even adds High Availability capabilities for IPv6 Multicast.

●   To effectively deploy and manage multicast protocols on the Cisco ASR 1000 Series Routers, Cisco Multicast Manager is a network management tool that can be used by enterprises and service providers that use IP Multicast to transport IP Multicast data and video over IP or by service providers that need to manage their Multicast Virtual Private Network (MVPN) environment. Hence, Cisco Multicast Manager makes management of services deployed on the Cisco ASR 1000 Series Routers easier.

Investment protection with the Cisco ASR 1000 Series Routers is offered through field firmware upgrades, software upgrades, and careful attention to future hardware requirements. You can feel confident that with Cisco, your network investments are protected both today and tomorrow.

More information on the Cisco ASR 1000 Series Routers can be found at:
http://www.cisco.com/go/asr1000.

To get a detailed overview of Cisco IOS Multicast technologies, please visit:
http://www.cisco.com/en/US/products/ps6552/products_ios_technology_home.html.