The information in this document is based on ISR router (for BVI) and ASR1K (for BDI). 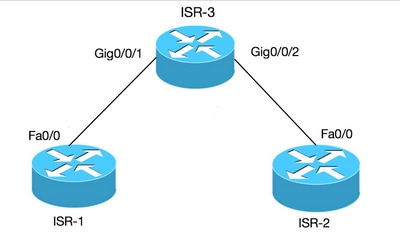 This can be achieved using BVI concept.

Bridge-group --- Groups the physical interfaces into one logical group

This concept is very similar to BVI but for devices running IOS-XE.

Below are some of the common terminologies used :

Bridge domain interface is a logical interface that allows bidirectional flow of traffic between a Layer-2 bridged network and a Layer-3 routed network.

Ethernet Virtual Circuit (EVC) is an end-to-end representation of a single instance of a Layer-2 service being offered by a provider to a customer. In the Cisco EVC Framework, the bridge domains are made up of one or more Layer-2 interfaces known as Service Instances. A Service Instance is the instantiation of an EVC on a given port on a given router. Service instance is associated with a bridge domain based on the configuration. 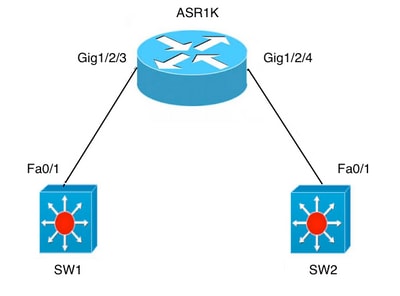 Here are couple of scenarios the describes the use of the Bridge Domain concept on IOS-XE platforms:

A) Fa0/1 on both the switches are Layer-3 interfaces and are in the same broadcast domain. BDI interface configuration on ASR is not required if the motive is to just establish connectivity between the two switches.

Note: If you want to route outside of the ASR, BDI interface configuration is required.

B) Bridge multiple vlans between the two switches:

Configure separate Ethernet virtual circuits (EVC) under the physical interface for each of the vlans. Bridge-domain is not supported under the sub-interface.