This document describes how to troubleshoot high CPU issues on an ASR1000 series router.

Cisco recommends that you understand the ASR1000 architecture to interpret and utilize this document.

However, a router that experiences high CPU utilization for extended periods without any changes in the network or configuration is unusual and needs to be analyzed. Therefore when overused, the CPU is not able to actively service all other processes, which results in slow command line, control plane latency, packet drops, and the failure of services.

The causes of high CPU are:

High CPU is not always a ASR1000 series router problem as router CPU utilization is directly proportional to the load on the router.  For example if there is a network change, this will cause a large amount of control plane traffic as the network will re-converge. Therefore, we need to determine the root cause of the CPU over-utilization to determine if it is expected behaviour or an issue.

Below is a diagram that details a step by step process on how to troubleshoot a High CPU issue: 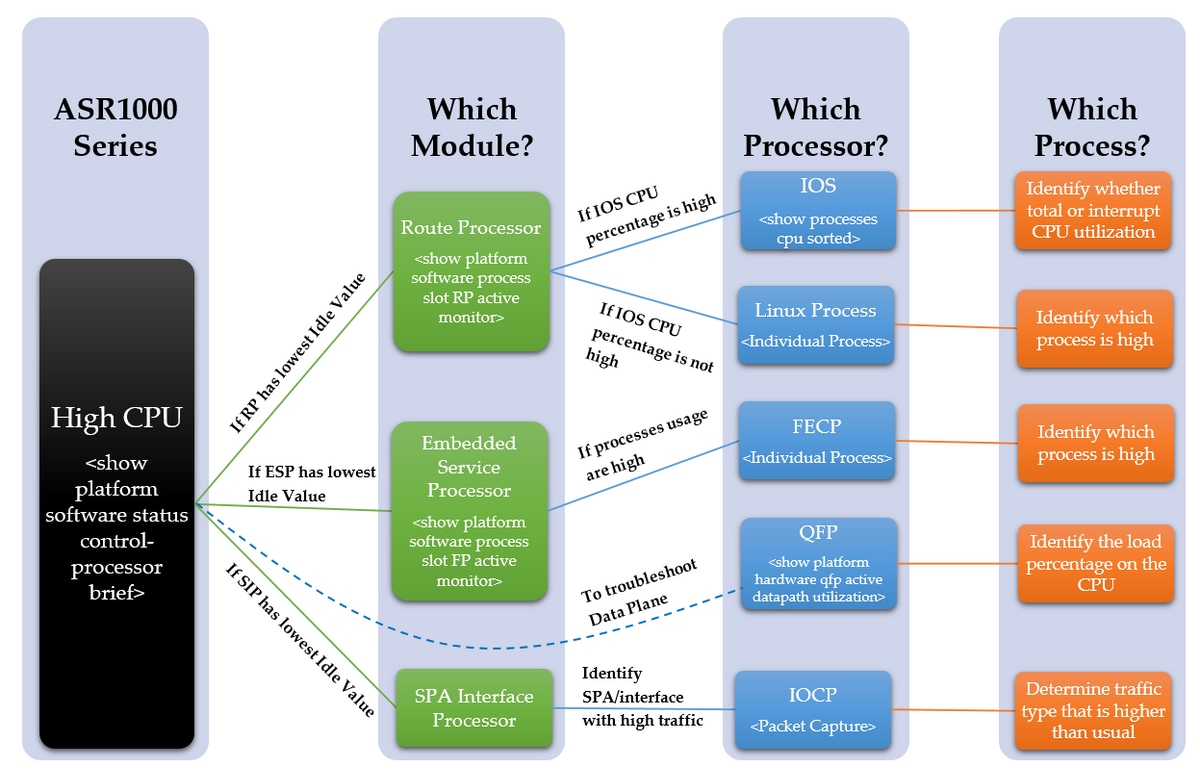 ASR1000 has several different CPU across the different modules. Therefore, we need to see which module shows greater than normal usage. This can be seen through the Idle value, as the lower the idle value, the higher the CPU utilization of that module. These different CPU all reflect the control plane of the modules.

Determine which module within the device is observed to experience high CPU. Is it the RP, ESP, or SIP with the below command

Refer to the below output to view the highlighted column

If the RP has a low Idle value, then proceed to Step 2 Point 1

If the ESP has a low Idle value, then proceed to Step 3 Point 2

If the SIP has a low Idle value, then proceed to Step 4 Point 3

If the Idle values are all relatively high, it may not be a control plane issue. To troubleshoot the data plane the ESP’s QFP needs to be observed. Symptoms of “high CPU” can still be observed due to an over-utilized QFP, which will not result in high CPU on the control plane processors. Proceed to STEP 6.

Confirm within the RP which processor is observed to have high CPU utilization with the below command. Is it the Linux process or the IOS?

If IOS CPU percentage is high (linux_iosd-imag), then is it is the RP IOS. Proceed to STEP 3

If the CPU percentage of other processes is high, then it is likely to be the Linux Process. Proceed to STEP 4

Confirm within the ESP if the control plane processor is observed to have high CPU utilization. Is it the FECP?

If processes are high then it is the FECP, then proceed to STEP 5

If it is not the FECP, it is not a control plane processes related issue within the ESP. If symptoms such as network latency or queue drops are still observed, the data plane may need to be reviewed for over-utilization. Proceed to STEP 6

Perform a packet capture and identify which traffic is higher than usual and which processes are associated with this type of traffic. Proceed to STEP 7

If the interrupt percentage is high then it signifies that a large amount of traffic is punted to the RP, (this can be confirmed with the command show platform software infrastructure punt)

If the interrupt percentage is low, but the total CPU is high, then there is a process or processes that will be observed to utilize the CPU for an extended period.

Confirm within the IOS which process or processes are observed to have high CPU utilization with the below command.

Identify which percentage is high (total CPU or interrupt CPU), and then if required identify the individual process/processes. Proceed to STEP 7

If the IOS is observed to have over-utilized the CPU, then we need to observe the CPU utilization for the individual linux process. These processes are the other processes listed from the show platform software process slot RP active monitor. Identify which process or processes are observed to experience high CPU then proceed to STEP 7.

If a process or processes are high then it is likely those are the processes within the FECP that are responsible for the high CPU utilization, proceed to STEP 7

The Quantum Flow Processor is the forwarding ASIC. To determine the load on the forwarding engine, the QFP can be monitored. The below command lists the input and output packets (priority and non-priority) in packets per second, and bits per second. The final line displays the total amount of CPU load due to packet forwarding in a percentage.

Identify if input or output are high, and view the process load and then proceed to STEP 7

Step 7 – Determine the root cause and identify the fix

With the process or processes that are observed to have over-utilized the CPU identified, there is a clearer picture of why high CPU has occurred. To proceed, research the functions performed by the identified process. This will assist in to determine an action plan on how to approach the problem. For example  - If the process is responsible for a particular protocol then you may want to look at the configuration related to this protocol.

If you still experience CPU related issues, it is recommended to contact TAC to allow an engineer to help you troubleshoot further. The above steps to troubleshoot will help the engineer isolate the issue more efficiently.

In this example we will run through the process to troubleshoot and try to best identify a possible root cause for the router's high CPU. To begin, determine which module is observed to experience the high CPU, we have the below output:

As the Idle amount within RP0 is very low, it suggests a high CPU issue within the Route Processor. Therefore to troubleshoot further we will identify which processor within the RP is observed to experience high CPU.

From this output, it can be observed that the total CPU percentage and the interrupt percentage are higher than expected. The top process that utilizes the CPU is the “IOSXE-RP Punt Se” which is the process that handles traffic for the RP CPU, therefore we can look further into this traffic that is punted to the RP.

From this output, we can see there are a large amount of packets in the “For-us data packets” which indicates traffic directed towards the router, this counter was confirmed to be have incremented from observation of the command multiple times over several minutes. This confirms that the CPU is over-utilized by a large amount of punted traffic, which is often control plane traffic. Control plane traffic can include ARP, SSH, SNMP, Route Updates (BGP, EIGRP, OSPF) etc. From this information, we are able to identify the potential cause of the high CPU and this assists to troubleshoot for the root cause. For example, a packet capture or a monitor of different traffic could be implemented to see the exact traffic punted to the RP which would allow the root cause to be identified and solved to prevent a similar issue in the future.

Once a packet capture is completed, some examples of potential punted traffic is:

This highlights how the root cause can be isolated through identification of the cause of the high CPU, when it comes down to an individual process level. From here, the individual process or protocol can be analysed in isolation to identify whether it is a configuration issue, software issue, network design, or intended practice.

The below is a list of other additional useful commands to utilize and are sorted by which processor they relate to: