This installation upgrades the total DRAM as follows:

This publication consists of these sections:

When verifying the installed memory, refer to the following guidelines:

An MSFC shipped since mid-February 2000 has 128 MB of memory as the default. There is no upgrade required for this MSFC; 128 MB is the maximum amount of memory.

To verify how much memory is installed on your MSFC or MSFC2, do one of the following:

For switches running Cisco IOS software on both the supervisor engine and the MSFC or MSFC2, enter the show version command and combine the used memory and free memory to get the total memory. The following example shows the total memory as 64 MB on an MSFC:

The following tools are required to perform the installation:

Safety warnings appear throughout this publication in procedures that may harm you if performed incorrectly. A warning symbol precedes each warning statement.

Only trained and qualified personnel should be allowed to install or replace this equipment.

During this procedure, wear grounding wrist straps to avoid ESD damage to the card. Do not directly touch the backplane with your hand or any metal tool, or you could shock yourself.

To install the DRAM DIMM upgrade on the MSFC or MSFC2, you must first remove the supervisor engine from the switch.

Always use an ESD wrist strap when handling modules or coming into contact with internal components.

To avoid erroneous failure messages, note the current configuration of all interfaces before you remove or replace another switching module, and allow at least 15 seconds for the system to reinitialize after a module has been removed or replaced.

When removing the supervisor engine, use the ejector levers to ensure that the connector pins disconnect from the backplane properly. Any supervisor engine or switching module that is only partially connected to the backplane can disrupt the system. Detailed instructions for removing and installing modules are described in the Catalyst 6000 Family Module Installation Guide.

To remove a supervisor engine, perform these steps:

If you do not plan to immediately reinstall the supervisor engine you are removing, disconnect any network interface cables attached to the uplink ports.

Use a screwdriver to loosen the captive installation screws at the left and right sides of the supervisor engine (see Figure 1).

Place the removed supervisor engine on an antistatic mat or antistatic foam pad. 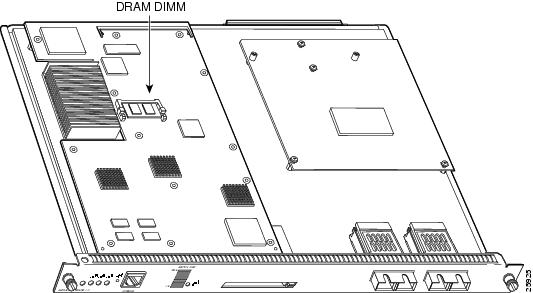 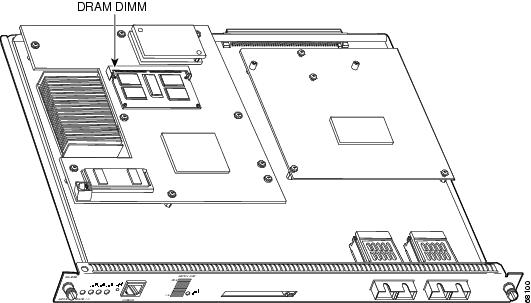 The DRAM DIMM is a sensitive component that is susceptible to ESD damage. Handle the DIMM by the edges only; avoid touching the memory modules, pins, or traces (the metal fingers along the connector edge of the DIMM). (See Figure 5.)

To prevent ESD damage, handle the DIMM as shown in Figure 5.

To install the DIMM upgrade, perform these steps:

Remove the DIMMs from their sockets by pulling the locking spring clips on both sides outward and tilting the DIMM free of the clips. Be careful not to break the clips on the DIMM connector.

The MSFC has two DIMMs, one stacked on top of the other. Remove the upper DIMM first, and then remove the lower DIMM.

On the MSFC2 shipped before November 2001, one spring clip is under the supervisor engine faceplate. Use a small screwdriver to push the spring clip open.

Hold the DIMM by its edges (see Figure 5) and gently lift and remove it, placing it on an antistatic mat or foam.

Remove an upgrade DIMM from the antistatic bag.

Hold the DIMM between your thumbs and forefingers, with the connector edge (the metal fingers) down. (See Figure 5.)

The MSFC has two DIMMs, one stacked on top of the other. Install the lower DIMM first.

When inserting the DIMM, use firm but not excessive pressure. If you damage a socket, you will have to return the MSFC or MSFC2 to Cisco for repair.

Hold the DIMM by its edges, and carefully insert it into the connector so that none of the metal fingers at the edge of the DIMM are visible under the lining of the connector.

Press down, so that the DIMM clicks into place (see Figure 6).

Figure 6 Installing the DIMM in the Socket

If you are upgrading an MSFC, repeat Step 3 through Step 7 for the second (upper) DIMM.

Regulatory Compliance and Safety Information for the Catalyst 6000 Family Switches

Subscribe to the What's New in Cisco Product Documentation as a Really Simple Syndication (RSS) feed and set content to be delivered directly to your desktop using a reader application. The RSS feeds are a free service and Cisco currently supports RSS Version 2.0.This document is to be used in conjunction with the documents listed in the "Related Documentation" section.