Figure B-1 depicts the layer two multicast frame that is transmitted at the expiration of every tag transmission interval for an AeroScout T2 asset tag configured for a basic set of operational parameters. In Figure B-1, the tag configuration includes: 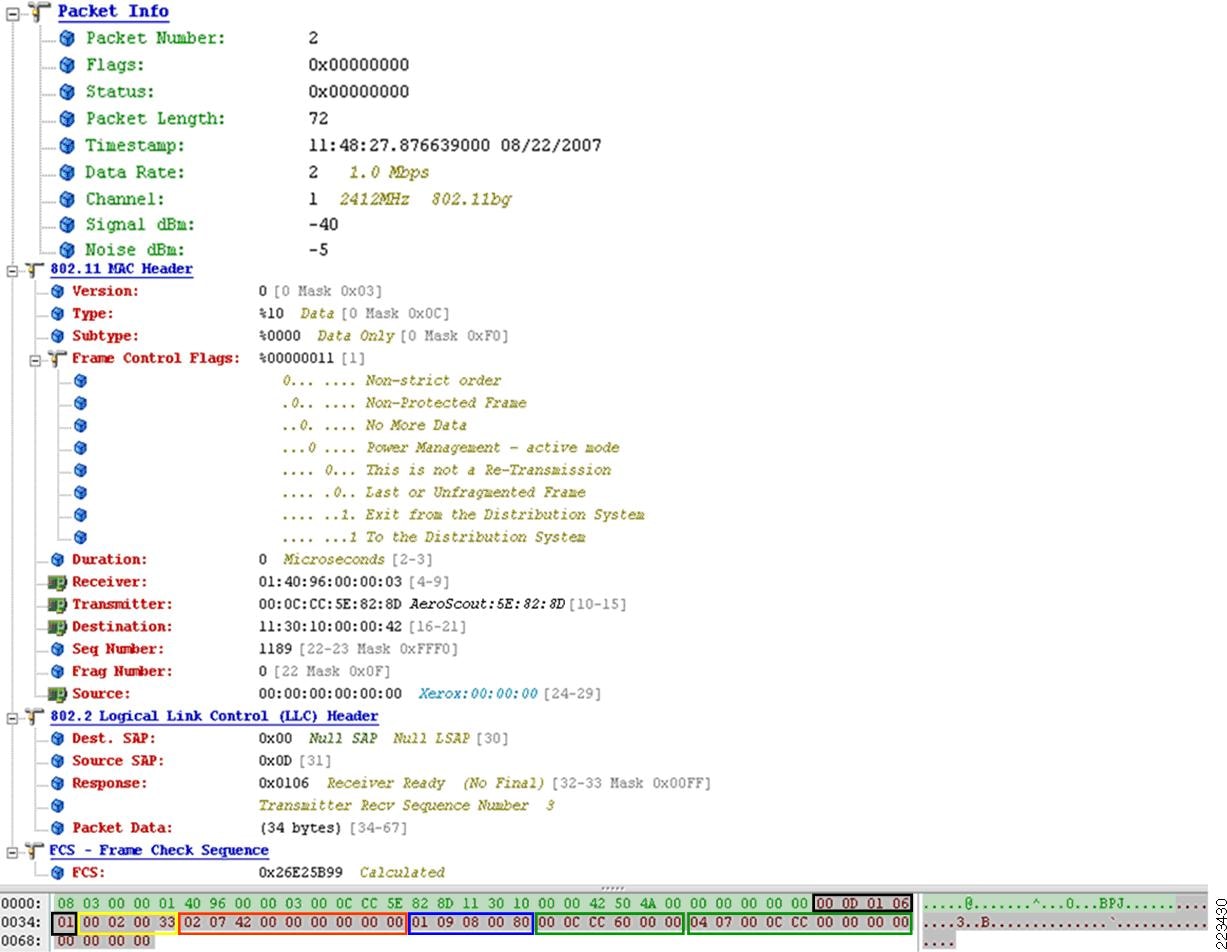 This asset tag shown in Figure B-1 is not configured to transmit external sensor telemetry. In addition, the RF frame also includes the following information:

The length of the multicast frames is dependent upon the tag's configuration and the optional features supported by the tag and tag vendor. In this case, the length of the multicast frame shown in Figure B-1 is 72 bytes. If additional features such as on-board temperature sensing were enabled, or if the tag were transmitting a multicast message due to stimulation from a chokepoint trigger, the frame length would be greater. For example, a typical length for tag multicasts transmitted as a result of stimulation from a chokepoint trigger is 88 bytes. The added length in this case comes primarily from the inclusion of the stimulating chokepoint trigger's MAC address and additional vendor-specific information.

The AeroScout T2 tag initiates Clear Channel Assessment (CCA) for 100 microseconds. If the channel is clear, it then multicasts its payload at 1 Mbps. These frames are sent at 1 Mbps with the To Distribution System (ToDS) and Exit From Distribution System (FromDS) bits in the 802.11 MAC header both set to "1". Note that the Wireless Distribution System (WDS) four-address frame format is being used, indicated by the presence of the receiver and transmitter addresses in Figure B-1.

It copies the access point's base radio MAC address (base BSSID) to the receiver address field in the encapsulated 802.11 header. 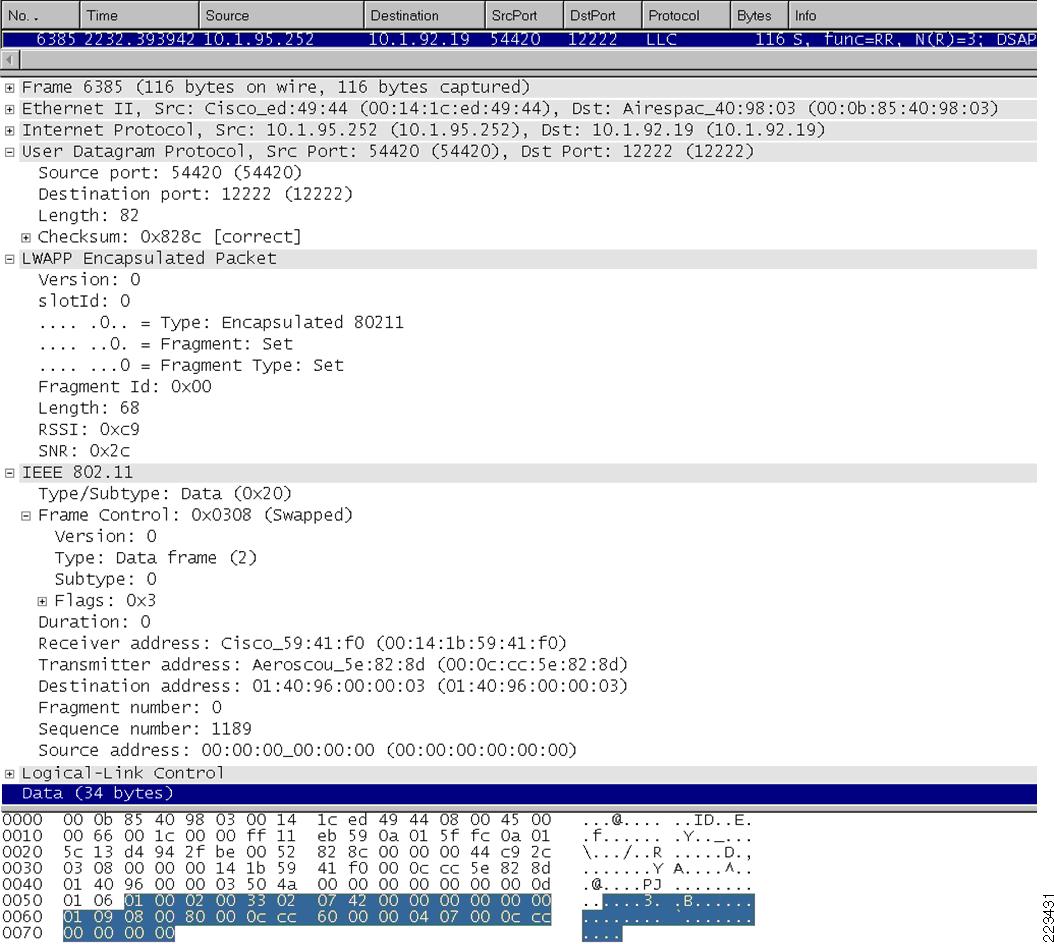 When the tag multicast address is recognized by the controller, the identity and type of sender is established via the payload information contained in the frame. Depending on the type of information contained within the tag payload, it will be passed to the location appliance using either traditional SNMP poll responses or the new LOCP introduced in software Release 4.1.

Note the sequence number (1189) and fragment fields (0) that appear in both the RF as well as the LWAPP frame analysis. This is an important piece of information that can be very useful when matching packets that flow into access points via 802.11 and out of them via LWAPP. The sequence number for a particular tag frame indicates the number of the tag message and is assigned from a single modulo 4096 counter starting at zero, and is incremented by 1 for each tag message cycle. The fragment number specifies the specific frame within a burst of frames transmitted on a single channel. The fragment number should always start from zero even if the burst length is zero. For a packet burst, the fragment number should be set to n where n is the packet index within the burst starting from 0. For example, if a tag is configured to transmit a burst of length 5, then the fragment number would start at 0 for the first packet in the burst, 1 for the second packet and so on up to 4 for the last packet in the burst.

For example, assume that an asset tag is configured to send a burst length of 3 packets for each of channels 1, 6, and 11. In the case of an AeroScout asset tag, the burst length is configured by using the tag message repetitions transmission parameter. The expected fragment and sequence numbers would be as shown in Table B-1.


Assume a second asset tag is configured to send a single message on each of channels 1, 6, and 11 every 60 seconds. The expected fragment and sequence numbers occurring over the next 120 seconds would be as shown in Table B-2 to Table B-4.

Verify if tag is properly detected by WLAN controllers by using the show rfid summary command:

If the controller does not detect the tag, use the command show rfid config to verify that RFID tag detection has been enabled on the controller.

Ensure that the RFID tag timeout is set to a recommended minimum of three times (and a recommended maximum of eight times) the longest tag transmission interval found in the tag population, inclusive of stationary as well as any "in-motion" tag transmission intervals. The valid range of values for this parameter is 60 to 7200 seconds and the default value is 1200 seconds.

Check that the RSSI expiry timeout are set as follows:

If the values are different from default as shown above, set them to default using the following configuration commands:

If asset tags are still not detected by the controller using the show rfid summary command, enable the following debugs on the controller:

It is recommended that the debug mac addr command be used when debugging in this fashion. This will help avoid a flood of debug messages in environments where there are many tags active.

If the debug command output indicates that packets from this asset tag are not received by the controller, you may want to continue debugging on the console of an access point that is known to be within range of the asset tag. In order to verify the detection of an RFID tag by an access point, perform the following steps:

If tag detection is found to be disabled on the access point, enable tag detection by issuing the following command on the controller:

Note that some access point commands can also be executed remotely from the controller using the access point remote debugging feature:

In software Release 4.1, in order for the output of the debug dot11 Dot11Radio 0 trace print mcast command to be viewed, the command must be entered directly at the access point console. It cannot be entered remotely from the controller.

If you would like to view the multicast address and tag MAC address in their unabbreviated format, issue the command no debug dot11 Dot11Radio 0 print short command at the access point console.

If the tag multicast messages are not seen in the access point debug output, use an RF protocol analyzer such as OmniPeek or WireShark to verify that asset tags are indeed successfully transmitting packets in the format expected on all three 2.4 GHz channels (or the channels that your infrastructure is configured for) as seen in Figure B-1. If the proper frame formats are not seen on the protocol analyzer trace, this should be addressed via the asset tag configuration or by replacing the asset tag if necessary, especially if the asset tag firmware is out of date. If the proper frames are seen on the RF protocol analyzer, attempt to reset tag detection in the controller by issuing the following commands:

If the issue continues to persist despite these suggestions, it is recommended that you capture all the details collected so far including the protocol analyzer traces and contact the Cisco Technical Assistance Center for further debugging assistance.

In order to verify that WLAN controllers are detecting asset tag telemetry and high-priority events, and forwarding that information to the location appliance using LOCP, the following procedure may be used:

Make sure that the asset tag is detected by the WLAN controller using the procedure outlined in the previous section.

Verify that the telemetry or high-priority "emergency" event information you are concerned with has been recorded in the RFID database on the controller:

For example, the following output snippet illustrates that indication of a panic button being depressed on an asset tag has been received, along with vendor specific data pertaining to the event:

If output similar to that above is not seen, use an RF protocol analyzer to capture the packets being transmitted by the tag during the send of telemetry or high priority events to verify that data is being transmitted in the correct format. You will need the assistance of the Cisco Technical Assistance Center to confirm this. If the packets that the tag transmits over the air are deemed by the Cisco TAC not to be valid, verify that the level of firmware being used in the asset tag is compliant with the Cisco Compatible Extensions for Wi-Fi Tags specification and that it supports the telemetry or high-priority functions desired.

If the TxData fields fail to increment in spite of known emergencies and telemetry data being sent by tags, verify that the LOCP send to the location appliance is successful using the following debug command:

The output should look similar to the following:

If messages are received indicating that there are LOCP failures, contact the Cisco Technical Assistance Center for further troubleshooting assistance.