This part of the CVD discusses radio operating frequencies that are used for WLAN networks. Also briefly discussed are 802.11 a/b/n/ac modulation techniques and the role of TPC and DCA in a radio frequency (RF) network.

In the United States there are three radio frequency bands allocated for unlicensed industrial, scientific, and medical (ISM) usage, as shown in Table 9-1 .

For our purpose we are interested in the IEEE 802.11b/n, 802.11a/n, and 802.11ac for Wi-Fi communication. Each range has different characteristics. The lower frequencies exhibit better range, but with limited bandwidth and thus lower data rates. The higher frequencies exhibit less range and are subject to greater attenuation from solid objects.

Devices that operate in unlicensed bands do not require any formal licensing process, but when operating in these bands, the user is obligated to follow the government regulations for that region. The regulatory domains in different parts of the world monitor these bands according to different criteria and the WLAN devices used in these domains must comply with the specifications of the relevant governing regulatory domain. Although the regulatory requirements do not affect the interoperability of IEEE 802.11b/g/n and 802.11a/n/ac-compliant products, the regulatory agencies do set certain criteria in the standard, such as specifying the emission requirements for WLAN to minimize the amount of interference a radio can generate or receive from another radio in the same proximity. It is the responsibility of the vendor to obtain certification for a product from the relevant regulatory body. Table 9-2 summarizes the current regulatory domains for Wi-Fi products, which include the main regulatory domains FCC, ETSI, and MKK.

Besides following the requirements of the regulatory agencies, many vendors also ensure compatibility with other vendors through the Wi-Fi certification program ( http://www.wi-fi.org).

See http://www.cisco.com/c/en/us/products/collateral/wireless/aironet-1300-series/product_data_sheet0900aecd80537b6a.html for compliance information and also check with your local regulatory authority to find out what is permitted within your country. The information provided in Table 9-1 and Table 9-2 should be used as general guidelines.

The 2.4 GHz band regulations have been relatively constant, given the length of time they have been operating. The FCC allows for 11 channels, ETSI allows for up to 13 channels, and Japan allows up to 14 channels, but requires a special license to operate in channel 14.

The IEEE 802.11 standard makes provisions for the use of several different modulation techniques to encode the transmitted data onto the RF signal. These modulation techniques are used to enhance the probability of the receiver correctly receiving the data and thus reducing the need for retransmissions. The techniques vary in their complexities and robustness to RF signal propagation impairments.

The direct-sequence spread spectrum (DSSS) approach involves encoding redundant information into the RF signal. Every data bit is expanded to a string of chips called a chipping sequence or Barker sequence. The chipping rate, as mandated by the U.S. FCC, is 10 chips at the 1- and 2-Mbps rates and 8 chips at the 11-Mbps rate. So, at 11 Mbps, 8 bits are transmitted for every one bit of data. The chipping sequence is transmitted in parallel across the spread spectrum frequency channel.

Frequency-hopping spread spectrum (FHSS) uses a radio that moves or hops from one frequency to another at predetermined times and channels. The regulations require that the maximum time spent on any one channel is 400 milliseconds. For the 1- and 2-Mb FHSS systems, the hopping pattern must include 75 different channels and must use every channel before reusing any one. For wide-band frequency hopping (WBFH) systems, which permit up to 10-Mb data rates, the rules require the use of at least 15 channels and they cannot overlap. With only 83 MHz of spectrum, WBFH limits the systems to 15 channels, thus causing scalability issues. In every case, for the same transmitter power and antennas, a DSSS system has greater range, scalability, and throughput than an FHSS system. For this reason, Cisco has chosen to support only direct-sequence systems in the spread spectrum products.

The orthogonal frequency division multiplexing (OFDM) used in 802.11a/n/ac and 802.11g data transmissions offers greater performance than the older direct-sequence systems. In the OFDM system, each tone is orthogonal to the adjacent tones and therefore does not require the frequency guard band needed for direct sequence. This guard band lowers the bandwidth efficiency and wastes up to 50 percent of the available bandwidth. Because OFDM is composed of many narrow-band tones, narrow-band interference degrades only a small portion of the signal, with little or no effect on the remainder of the frequency components.

The 802.11n standard, which was ratified in 2009, also operates in the same spectrum as 802.11b/g and is backward-compatible with the 802.11b standard. 802.11n made a fundamental shift in WLAN technology by introducing many new improvements over older 802.11b/g technology to provide much higher speeds. These new improvements include channel bonding to provide 40 MHz channels, MIMO (Multiple In Multiple Out) Antenna system, MRC (Maximum Ratio Combining) and Shorter Guard Intervals. The data rates in the 2.4 GHz spectrum can reach up to 72 Mbps with a single channel (20 MHz), single antenna mode. With a 20 MHz channel and multiple antennas, 802.11n data rates in the 2.4 GHz can reach up to 300 Mbps. By combining two 20 MHz channels, throughputs up to 600MHz can be achieved, however channel bonding is not a popular choice in a 2.4 GHz deployment due to various factors like RF interference and lack of overlapping channels.

While 802.11n technology is supported in 2.4 GHz spectrum, Cisco Access Points cannot be configured to use 40 MHz channels in the 2.4 GHz spectrum by combining channels.

Operating in the unlicensed portion of the 5 GHz radio band, 802.11a is reasonably immune to interference from devices that operate in the 2.4 GHz band, such as microwave ovens, many cordless phones, and Bluetooth (a short-range, low-speed, point-to-point, personal-area-network wireless standard). Because the 802.11a standard operates in a different frequency range, it is not compatible with existing 802.11b or 802.11g-compliant wireless devices, but it does mean that 2.4-GHz and 5-GHz equipment can operate in the same physical environment without interference.

Choosing between these two technologies (802.11b/g/n and 802.11a/n/ac) does not involve a one-for-one trade-off. They are complementary technologies and will continue to coexist in future enterprise environments. Those responsible for implementing these technologies must be able to make an educated choice to properly plan 2.4 GHz and 5 GHz networks. Proper WLAN capacity planning should be undertaken to ensure that devices both in 2.4 GHz and 5 GHz get adequate bandwidth for their use.

The 5 GHz band in which 802.11a/n/ac operates is divided into several different sections. Each of the Unlicensed National Information Infrastructure (UNII) bands presented in Table 9-3 was originally intended for different uses, but all can currently be used by indoor 802.11a/n/ac with appropriate power restrictions. Initially, the FCC defined only the UNII-1, UNII-2, and UNII-3 bands, each of which had four channels. The channels were spaced 20 MHz apart with an RF spectrum bandwidth of 20 MHz, thereby providing non-overlapping channels using 20 MHz channel width.

There are differing limitations on these three UNII bands. Restrictions vary between them for transmit power, antenna gain, antenna styles, and usage. The UNII-1 band is designated for indoor operations and initially had a restriction of permanently attached antennas. The UNII-2 band was designated for indoor or outdoor operations and permitted external antennas. The UNII-3 band was intended for outdoor bridge products and permitted external antennas, but the UNII-3 band can now be used for indoor or outdoor 802.11a/n/ac WLANs as well.

Table 9-3 summarizes the channels available and restrictions on them.

802.11a uses 20 Mhz channels. 802.11n can use 20 or 40 MHz channels. 802.11ac is defined up to 160 MHz channels. However current implementations (802.11ac Wave 1 products) can use 20, 40, or 80 MHz channels. The way channels are used is through channel bonding, i.e., taking adjacent channels and bonding them together to create a bigger spectrum (channel) that facilitates higher data rate. The 802.11n standard, which was ratified in 2009, also operates in the same spectrum as 802.11a and is backward compatible with the 802.11a standard. 802.11n made a fundamental shift in WLAN technology by introducing many new improvements over older 802.11a technology to provide much higher speeds. These new improvements include channel bonding to provide 40 MHz channels, MIMO (Multiple In Multiple Out) Antenna system, MRC (Maximum Ratio Combining), and Shorter Guard Intervals. With a 20 MHz channel and multiple antennas, 802.11n data rates in the 5 GHz can reach up to 300 Mbps. By combining two 20 MHz channels into a 40MHz channels, throughputs up to 600MHz can be achieved. Similarly by combing even more channels into an 80Mhz channels for 802.11ac, throughputs up to 1.3Gb can be achieved.

There are not many commercial implementations of APs which go beyond 3x3 MIMO with three spatial streams however. Therefore you are unlikely to currently find an AP with higher than 450 Mbps data rates for 802.11n. 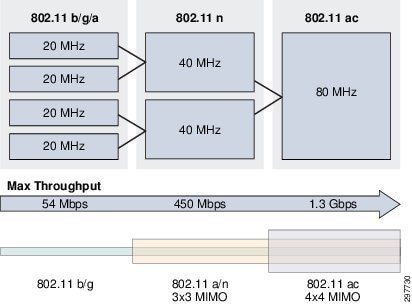 A note on the DFS and TPC: Dynamic Frequency Selection instructs a transmitter to switch to another channel whenever a particular condition (such as the presence of a radar signal) is met. Before transmitting, the DFS mechanism of a device monitors its available operating spectrum, listening for a radar signal. If a signal is detected, the channel associated with the radar signal is vacated or flagged as unavailable for use by the transmitter. The transmitting device continuously monitors the environment for the presence of radar, both prior to and during operation. Portions of the 5 GHz band are allocated to radar systems, which allows WLANs to avoid interference with incumbent radar users in instances where they are collocated.

Both DFS and TPC are discussed in greater detail in Radio Resource Management in Chapter20, “Post-Deployment Radio Frequency Tuning”

802.11ac is a faster and more scalable version of 802.11n. 802.11ac couples the freedom of wireless with the capabilities of Gigabit Ethernet. 802.11ac achieves its raw speed increase by pushing on three different dimensions:

The design constraints and economics that kept 802.11n products at one, two, or three spatial streams have not changed much for 802.11ac, so we can expect the same kind of product availability with first-wave 802.11ac products built around 80 MHz and delivering up to 433 Mbps (low end), 867 Mbps (mid-tier), or 1300 Mbps (high end) at the physical layer. Second-generation products promises still more channel bonding and spatial streams, with plausible product configurations operating at up to 3.47 Gbps.

Because of increased width, there are now far fewer channels available for 802.11ac in 5 GHz. To get maximum throughput both client and AP should support 802.11ac. In general you also need good SNR ratio across all four sub 20 Mhz channels to achieve highest throughput.