This chapter discusses the pertinent characteristics of voice and data designs only as they relate to co-existence with the location tracking capabilities of the Cisco UWN.

The location-aware Cisco Unified Wireless Network is a multi-purpose wireless platform that allows enterprises to bring consistency and efficiency to their business processes, providing increased overall effectiveness. A key advantage of the location-aware Cisco UWN is the integration and the cost advantage that stems from its ability to perform high quality location tracking of clients and rogue devices with only reasonable additional investment required beyond that necessary to support other enterprise wireless applications, such as VoWLAN and high speed data.

When architecting VoWLAN and high speed data designs and determining subsequent access point placement, the primary concerns that the designer should consider are described below.

For example, when designing VoWLAN solutions that involve the Cisco VoWLAN handset, current VoWLAN best practices suggest a minimum planned signal level threshold of -67dBm. Other voice devices may have differing requirements. Requirements for data devices depend on the transmission rate at which they are required to operate. Data devices used to pass streaming multimedia and other bandwidth-intensive applications typically require higher data transmission rates and consequently, higher minimum signal levels. This is covered as part of AP capacity planning (see Chapter 18, “Capacity Planning and High Density”).

This is the ratio of the signal strength at the receiver to the noise floor and is measured in dB. Since both components of the ratio are specified in dBm, the SNR can be calculated by simply subtracting the noise value from the signal strength value. The minimum required SNR for a receiver to operate properly varies depending on construction of the receiver as well as the bit rate or modulation it is expected to operate at. A typical example is shown in Table 19-1 .

Ensuring the existence of sufficient SNR is very important when designing for robust and reliable wireless application support. This is especially so in wireless voice applications, where it is necessary to ensure that a high percentage of packets are successfully decoded in each cell and jitter is kept to a minimum. For example, with a Cisco VoWLAN handset the recommended SNR to ensure a good user VoWLAN experience is 25 dB. Keep in mind that if the signal to noise ratio is insufficient due to a high noise floor, proper operation of the wireless device may be difficult to achieve in spite of high overall received signal levels. SNR and minimum received signal levels should be considered together to ensure that a new deployment has met design standards and is ready for production pilot testing.

Data bit rates are enabled or disabled via the wireless infrastructure, with minimum signal level thresholds and the signal to noise ratio determining which of the enabled bit rates are actually usable. For example, with the Cisco VoWLAN handset, the combination of a -67dBm minimum signal level and a 25dB signal to noise ratio generally makes the use of 24 Mbps or greater data rates possible.

In a very simple sense, we can think of each of our access points as residing at the center of an RF “cell” with a spherical boundary of RF coverage around them. Our primary interest is in the coverage boundary associated with our desired minimal signal threshold. To provide consistent coverage and availability across our floor, each of our cells should join with each adjacent cell at a coverage boundary that is greater than our desired minimal signal threshold. How much greater? That is determined by the amount of cell-to-cell overlap we wish to implement in our design, which in conjunction with the other parameters we have described, dictates the potential packet loss experienced by VoWLAN devices before a roam event occurs.

The application of cell-to-cell overlap is intended to increase the probability that VoWLAN clients quickly detect and roam to an adjacent cell without enduring an excessive degree of rate shifting and re-transmission as the device approaches the cell boundary. Excessive rate shifting and packet re-transmission is especially counter-productive for VoWLAN devices, as such behavior typically results in packet loss which usually translates into jitter. Since jitter is well established to be detrimental to a high quality VoWLAN user experience, we strive to minimize jitter in our VoWLAN designs by ensuring that devices have the opportunity to roam well before the quality of the user’s voice call is in jeopardy. We accomplish this by ensuring that the recommended degree of cell-to-cell overlap exists in our designs. 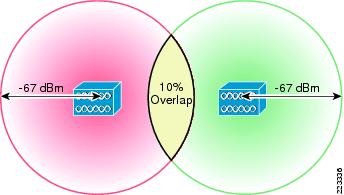 As seen, the designer striving towards completing an optimized location design is likely to be attempting to satisfy the four primary concerns of VoWLAN and data WLAN designers concurrently.

The chief location-tracking concerns of most designers wishing to track clients centers around:

Degradation in the ability of the system to resolve distance based on changes in RSSI.

Generally, this results in access points being deployed with an inter-access point distance of between 40 and 70 feet. However the coverage requirements of demanding applications (such as voice and high speed data) may require more dense deployments under certain circumstances.

The question that comes to mind then is can the requirements described earlier for voice and data applications be met in combination with the requirements of location tracking? The answer is yes, with the precise mechanics of how it is done dependent upon the specific requirements of the voice and data applications themselves, the access point and antenna configuration being considered, and the physical characteristics of the environment into which the infrastructure will be deployed.

An example use case of a layout that needs to be updated from a VoWLAN ready to CMX (that is Location, Data, and Voice ready) is described in Appendix D, “CMX Use Case Example—Upgrade VoWLAN Ready Network to Location/CMX Ready.”