Managing a Lost or Stolen Device

What’s New: Added a note about how ACL behavior has changed in version 7.5+ of the Wireless LAN Controller.

When a previously provisioned device is reported lost or stolen, the device must be denied access to prevent unauthorized access to the network.

A first level of defense to protect against a lost or stolen device is to enforce the use of a PIN lock, a passcode required to access the device that may lock the device automatically after a short period of inactivity (typically five to ten minutes). This can also be enhanced by erasing all data on the mobile device after a number of failed passcode attempts or performing a selective wipe. This and other rules may be enforced by the integration of Cisco ISE with a Mobile Device Manager.

The Cisco ISE offers different ways to prevent a lost or stolen device from connecting to the network. The My Devices Portal allows the employee to mark a device as lost and prevent others from gaining unauthorized access with that device. In addition, if the device is connected to the network when the device is marked as lost, the ISE may issue a Change of Authorization (CoA) to force the endpoint off the network.

Employees and administrators have different capabilities to block lost or stolen devices:

From the My Devices Portal:

Note Devices that have been fully wiped cannot be restored by ISE and will need to re-register to recover the certificate and WiFi profile.

The Blacklist identity group is system generated and maintained by ISE to prevent access to lost or stolen devices. In this design guide, two authorization profiles are used to enforce the permissions for wireless and wired devices within the Blacklist:

This authorization profile only allows access to the ISE “Unauthorized Network Access” page to inform the user that access to the network has been denied for that device. 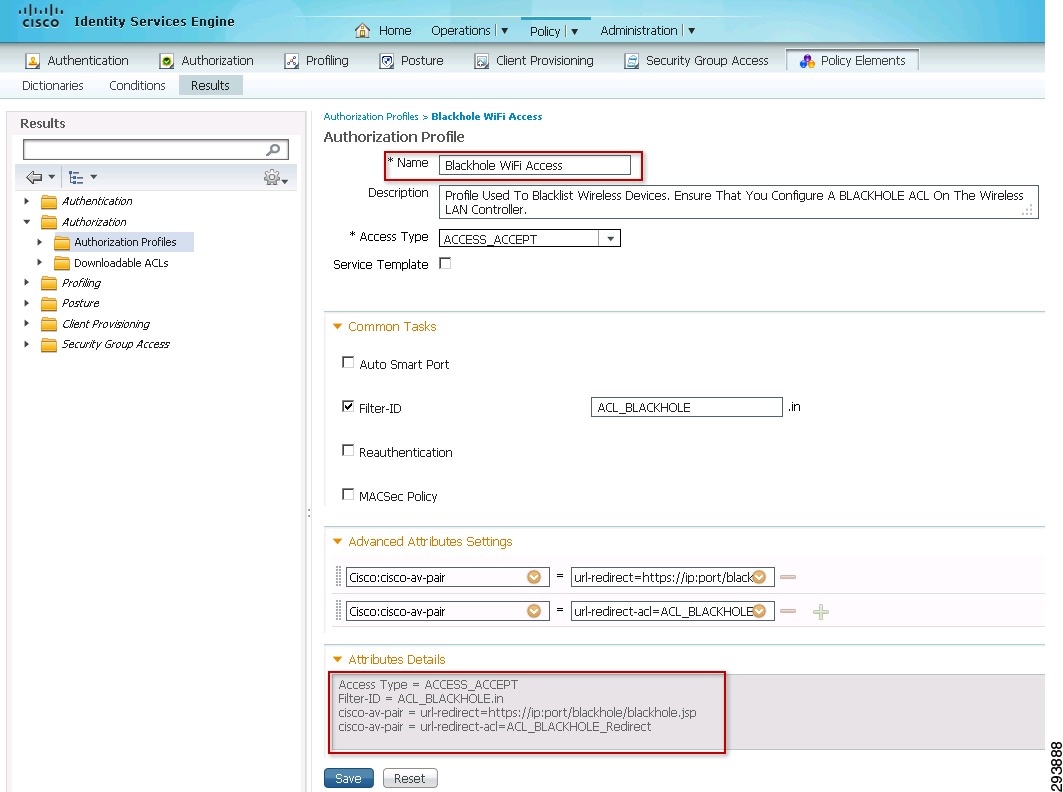 Figure 22-4 shows how the ACL_BLACKHOLE_Redirect access list is defined in a CUWN WLC to only allow access to the ISE and DNS server. By granting access to DNS and ISE, the endpoint is able to reach the blackhole.jsp web page hosted at the ISE.

The ACL behavior has changed in version 7.5+ of the Wireless LAN Controller. The presence of an Airespace ACL Name in the authorization profile affects the webauth redirect functionality for access points operating in FlexConnect mode.
For FlexConnect deployments, the ACL_Provisioning Airespace ACL must be removed from the configuration. This implies that there needs to be two independent authorization profiles for provisioning: one for FlexConnect and CUWN wireless controllers and another one for and Converged Access wireless controllers.
Refer to Appendix E, “Airespace ACLs in WLC 7.5+” for sample configurations.

For endpoints connecting to the branch, a similar FlexConnect ACL is defined and applied to the FlexConnect Group. Figure 22-5 shows the ACL_BLACKHOLE_Redirect FlexConnect ACL. This ACL is similar to the one used for campus devices, shown above, but defined under Security > Access Control Lists > FlexConnect ACLs.

To apply this FlexConnect from the branch, select the appropriate FlexConnect Group and click the Policies tab. Add the ACL_BLACKHOLE_Redirect ACL, as shown in Figure 22-6. 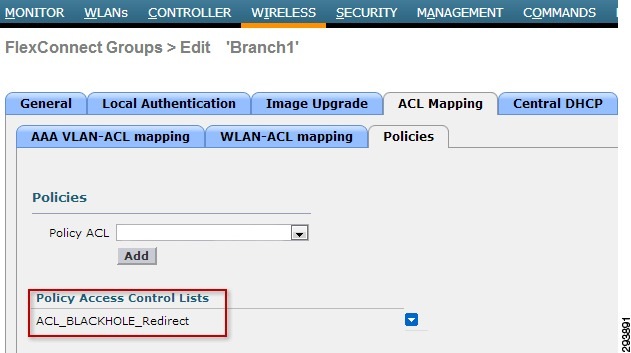 The ACL above causes any web traffic (HTTP or HTTPS) from any source to any destination to be redirected to the blacklisted devices web page within the Cisco ISE.

The authorization profile also applies a second, RADIUS specified local ACL (BLACKHOLE_ACL) across the WLAN for network access. The CT5760 and Catalyst 3850 Design use named ACLs. The name of the ACL is sent from the ISE to the Catalyst 3850 Series switch or the CT5760 wireless controller via the RADIUS Airespace-ACL-Name attribute-value pair within the Airespace dictionary. The specific form for the example is as follows:

The WLAN access-control ACL (ACL_BLACKHOLE) determines what traffic is allowed on the WLAN by the Catalyst 3850 series switch or the CT5760 wireless LAN controller. An example of the BLACKHOLE_ACL ACL is shown below.

The ACL above allows traffic from any source to the blacklisted devices webpage within the Cisco ISE.

Once a device is in the Blacklist identity group, future attempts to connect to the network are denied. When a user opens a web browser on a blacklisted device, the session is redirected to the page shown in Figure 22-7.

Figure 22-8 shows how a device in the Blacklist attempts to connect to the network and how the Blackhole WiFi Access authorization profile is applied.

The user experience when a wired device is blacklisted is similar to a wireless device that has been blacklisted. The ISE authorization policy rule for blacklisting of on-boarded wired devices will be the same for devices connected via Converged Access products and other Catalyst switches for BYOD. When a device is blacklisted and the user attempts to access any web page, the device is re-directed to the portal that lets the user know that the device has been identified as lost. The following steps show how to implement this behavior:

Create an ACL_BLACKHOLE downloadable DACL that only allows access to the ISE.

Create a URL Redirect ACL called ACL_BLACKHOLE_Redirect on the access layer switch that matches any HTTP or HTTPS traffic.

Create a Blackhole Wired Access authorization profile that pushes the DACL and redirect-link to the switch.

Define a new rule in the Authorization policy that matches on the blacklisted devices and assigns the authorization profile Blackhole Wired Access.

Creating a Downloadable ACL on ISE

The ACL above allows traffic from any source to the blacklisted devices webpage within the Cisco ISE.

Creating the URL REDIRECT ACL on the Switch

Note that this is the same URL redirect ACL used for blacklisted wireless devices for the Catalyst 3850 Series switch, discussed above. Bear in mind that the ACL is only required on the Catalyst 3850 and not on the CT5760 wireless controller because only the Catalyst 3850 supports direct connection of wired clients through its switch ports. 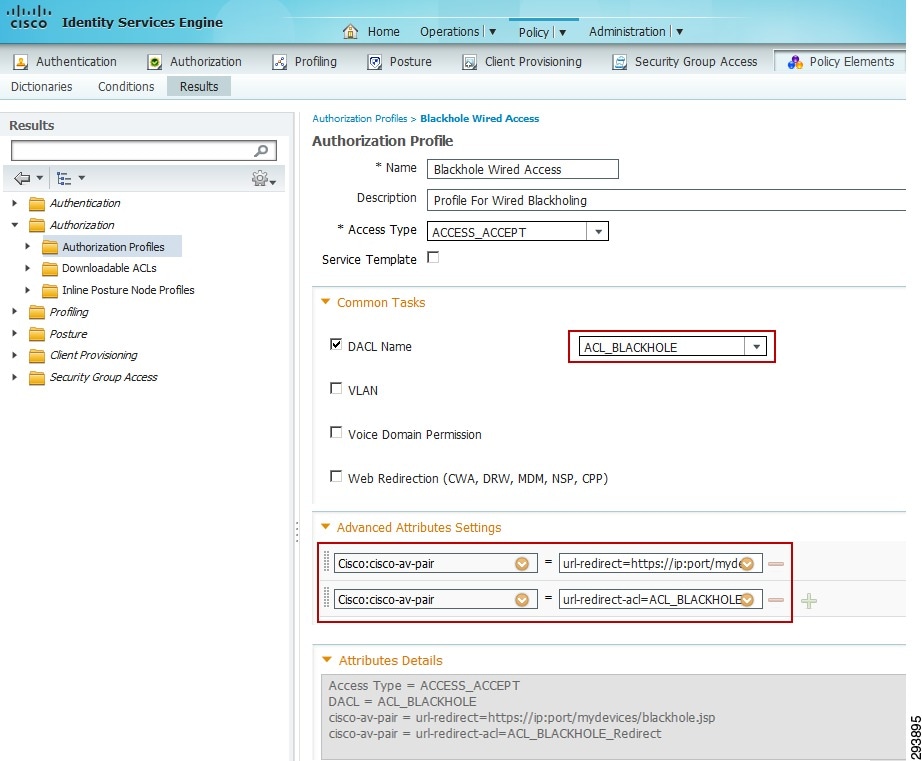 The following cisco-av-pairs are defined:

The last configuration step is to create a new rule in the authorization policy that uses the Blackhole Wired Access authorization profile created above when it matches a dot1x wired device which is blacklisted. Figure 22-11 displays the rule.

Once the rules are defined, a blacklisted wired device will be denied access to the network.

Using the My Devices Portal, employees are able to mark any of their devices as Lost to prevent further network access. The portal requires user authentication and displays the devices that have been added or registered by the employee. The My Devices Portal may be accessed from the following URL:

In addition to being able to report a device lost or stolen, the portal is used to enforce MDM Actions, such as PIN lock and device wipes through MDM integrations. Figure 22-12 shows the My Devices Portal page. 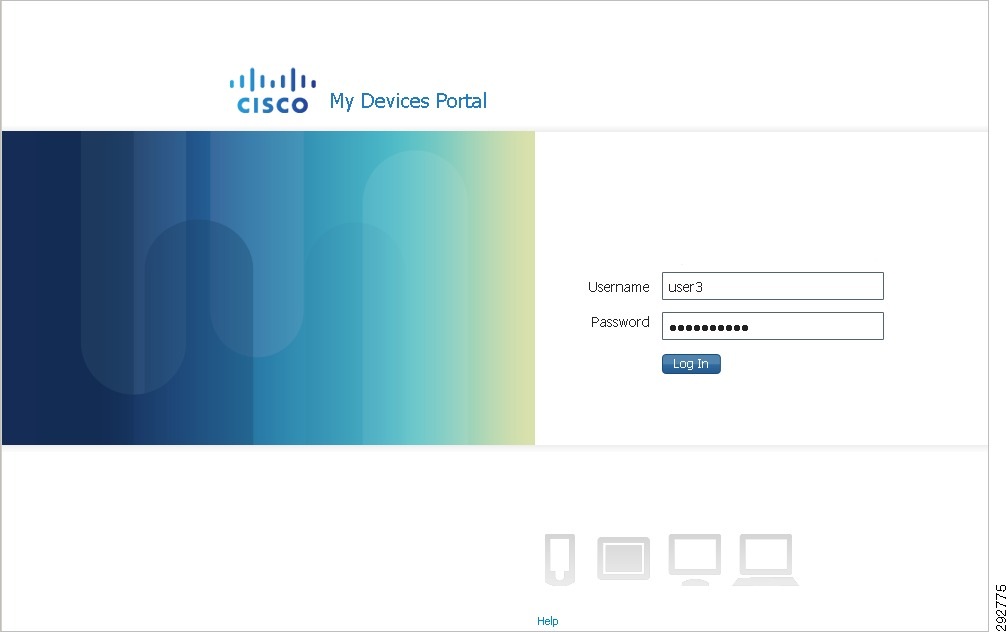 The portal displays devices assigned to the employee or previously registered using the self-registration portal.

Reporting a Device as Lost

The employee is able to edit the device’s description and report a device as lost, as shown in Figure 22-13. 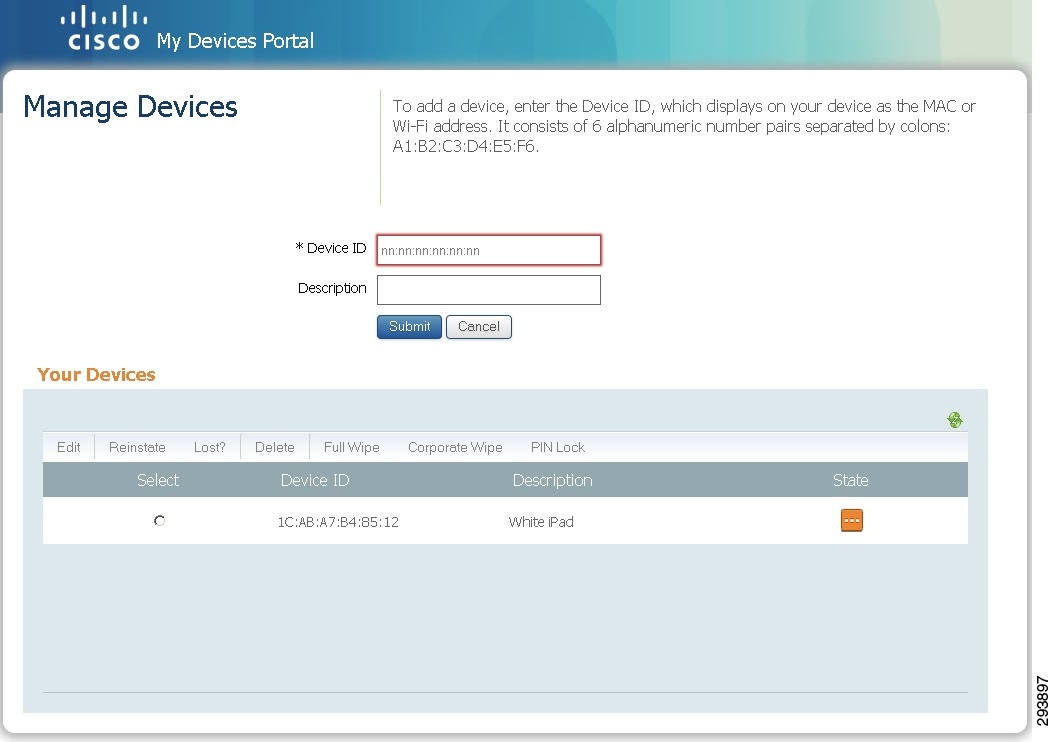 Before blacklisting a device, ISE displays the warning shown in Figure 22-14.

The My Devices Portal also gives the user the option to reinstate a blacklisted device, allowing the device to regain access to the network. Figure 22-16 shows the Reinstate option. 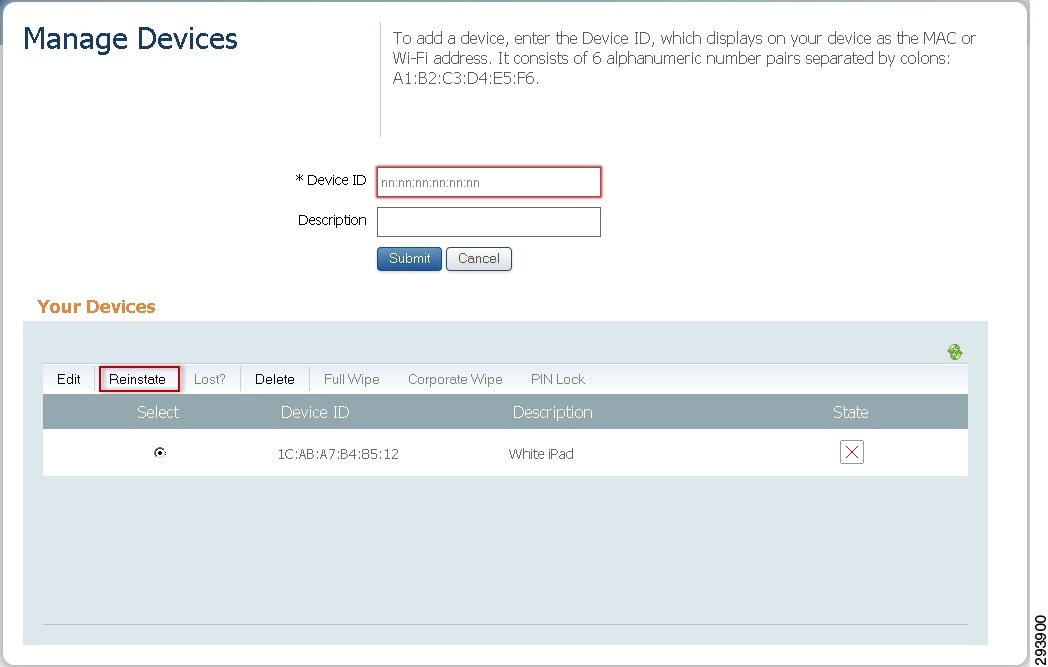 Before reinstating a device, ISE displays the warning shown in Figure 22-17.

The integration with an MDM provides additional device control to the user. With the My Devices Portal, the employee is able to:

Figure 22-18 shows the MDM actions available from the My Devices Portal: 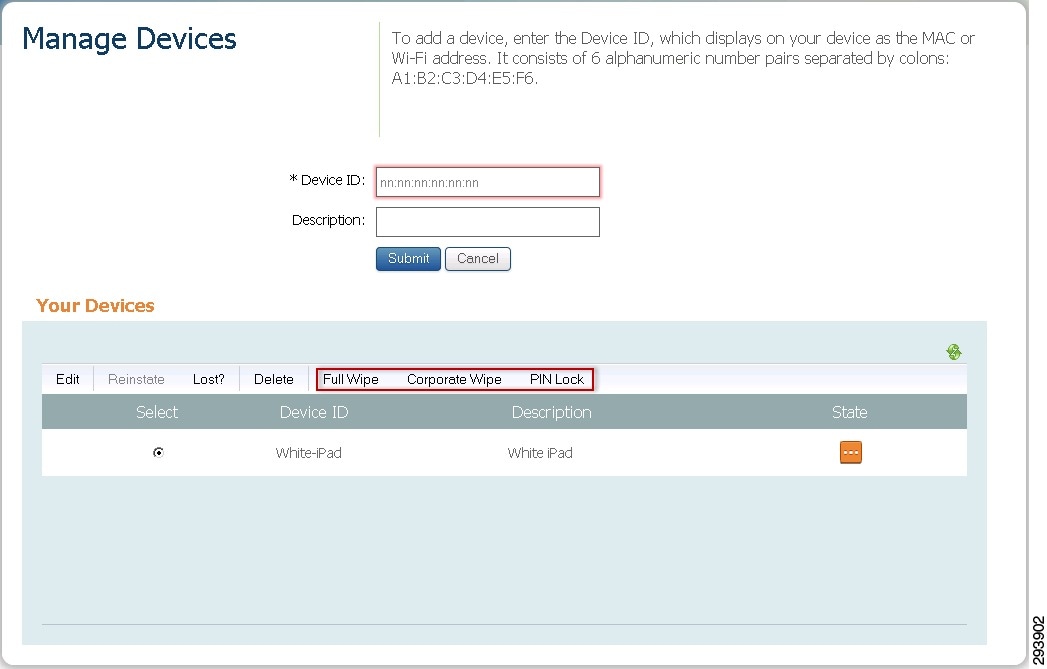 Figure 22-19 Device to be Blacklisted

Note that by adding the device to the Blacklist Identity Group, ISE prevents future attempts to connect to the network, but if the user is currently connected to the network, an additional step is required to force the endpoint off the network.

To force a device off the network, click Operations > Authentications > Show Live Sessions, as shown in Figure 22-20.

To terminate the endpoint’s session, select Session termination from the CoA Action menu, as shown in Figure 22-21.

The employee has the option to reinstate a device that was blacklisted by the administrator using the My Devices Portal.

The administrator also has the option to initiate MDM actions on the endpoints. To perform an action, click on Administration > Identities > Endpoints and select the appropriate device, as shown in Figure 22-22. 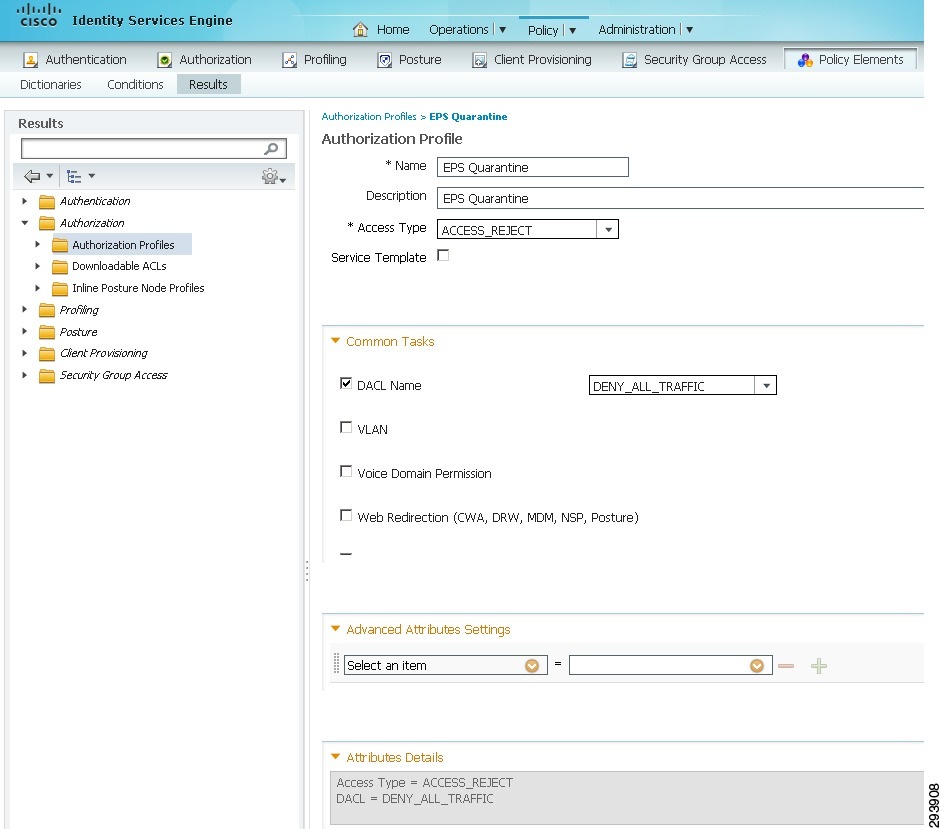 Create an EPS Exception policy and rule to be processed before the standard policies are processed. Click Policy > Authorization > Exceptions > Create a New Rule, as shown in Figure 22-25.

To quarantine a device, click Operations > Endpoint Protection Service and enter the endpoint’s MAC Address to be quarantined. Under Operation select Quarantine, as shown in Figure 22-28. 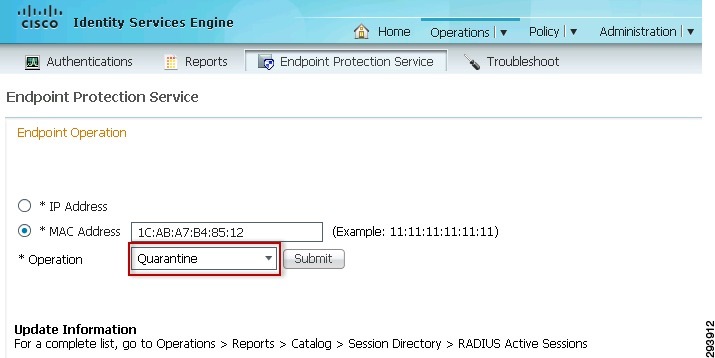 As soon as the administrator clicks Submit, the device is forced off the network and future attempts to connect are rejected.

Figure 22-29 shows the EPS_Quarantine authorization profile being applied and how a device is denied access.

EPS provides an extra layer of control to monitor and change the authorization state of endpoints.

Since EPS has higher precedence over blacklisted devices, employees do not have the option to reinstate devices that have been quarantined by the administrator.

To unquarantine a device, enter the device’s MAC address and select Unquarantine from the operation pull down menu, as shown in Figure 22-30. The EPS activities are logged by ISE and can be reviewed by clicking Operations > Reports > Endpoints and Users > Endpoint Session History. Figure 22-31 shows one of the reports that includes endpoint information.

Figure 22-32 Revoking the Digital Certificate on the CA Server

Once the above process is complete, the certificate serial number is added to the Certificate Revocation List (CRL). Figure 22-33 displays the CRL information.

This information is periodically published by the CA server. Figure 22-34 shows the location of the CRL where the ISE can download the list. 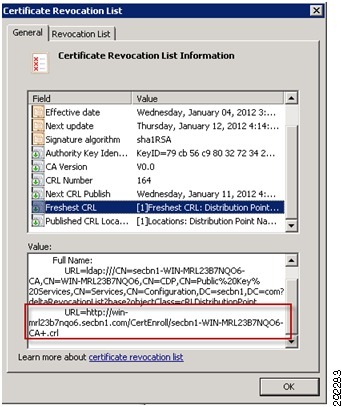 The next step is for ISE to be configured with CRL distribution location so that it can periodically download the list and compare it with the certificates presented by the clients. Click Administration > Certificates > Certificate Authority Certificates and configure the CRL values, as shown in Figure 22-35. 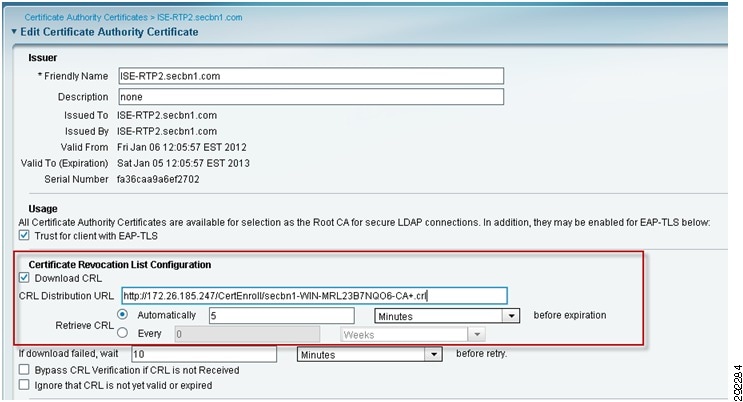