The Cisco ISE allows employees to be in charge of on-boarding their own devices through a self-registration workflow and simplifies the automatic provisioning of supplicants as well as certificate enrollment for the most common BYOD devices. The workflow supports iOS, Android, Windows, and Mac OS devices and assists in transitioning these devices from an open environment to a secure network with the proper access based on device and user credentials.

The simple workflow provides a positive experience to employees provisioning their own device and allows IT to enforce the appropriate access policies.

The employee connects to the provisioning SSID and is redirected to the Guest Registration portal for registration after opening a browser. The employee logs in using their Active Directory credentials.

If the device is not yet registered, the session is redirected to the self-registration portal, where the user is asked to enter a description for the new device. The employee is not allowed to change the Device ID (MAC address), which is automatically discovered by ISE.

Cisco has been made aware of potential incompatibilities introduced by Apple iOS 7. We are working to understand the limitations and design updates will be made to this publication. 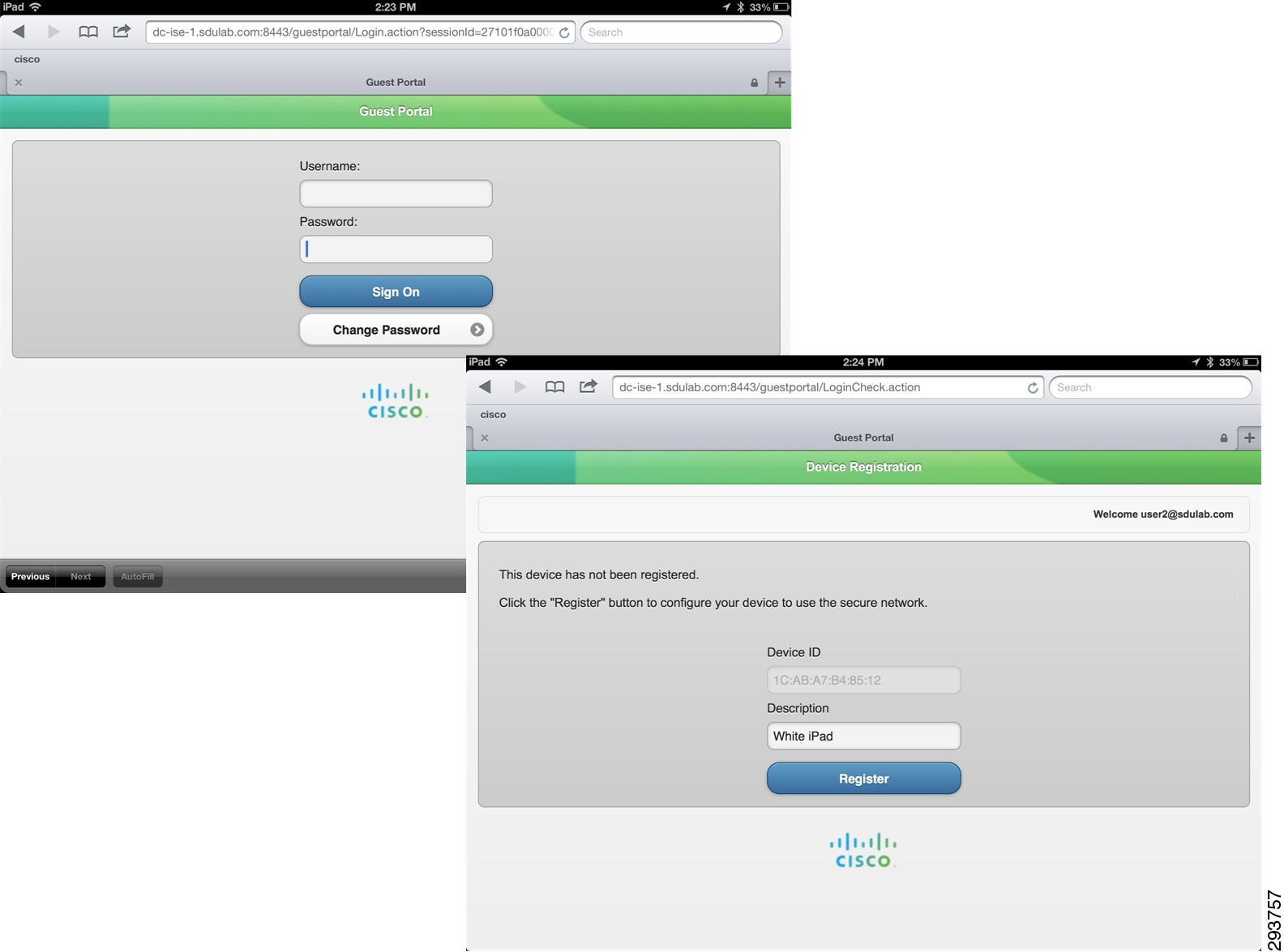 The employee is notified that registration is complete and is reminded to manually connect to the BYOD_Employee SSID. 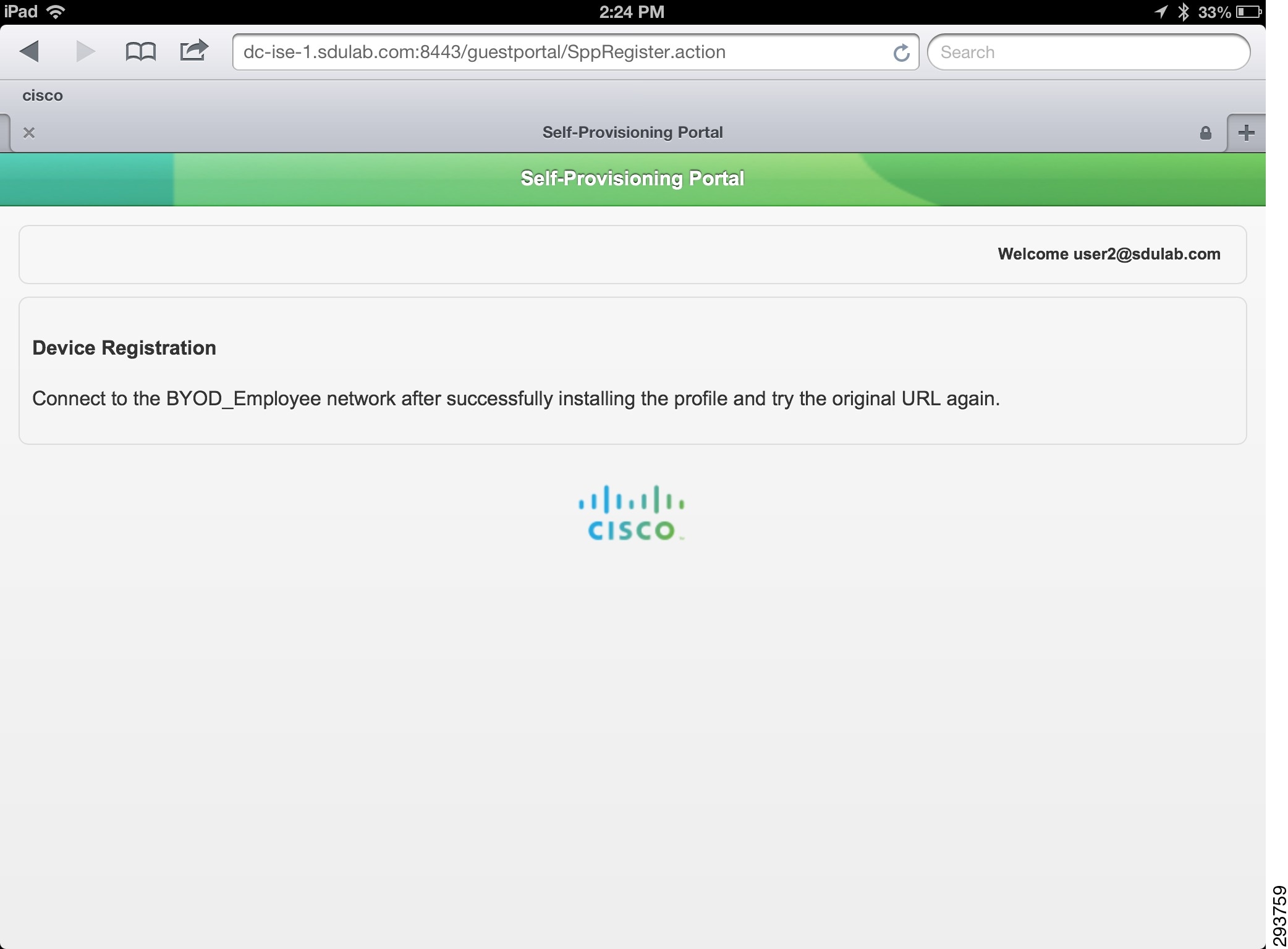 For iOS devices, the employee is required to connect manually to the BYOD_Employee SSID.

The certificates and profile can be viewed by clicking Settings > General > Profiles and selecting Mobile Profile. Figure 19-4 highlights the Wi-Fi profile to connect to the BYOD_Employee SSID. 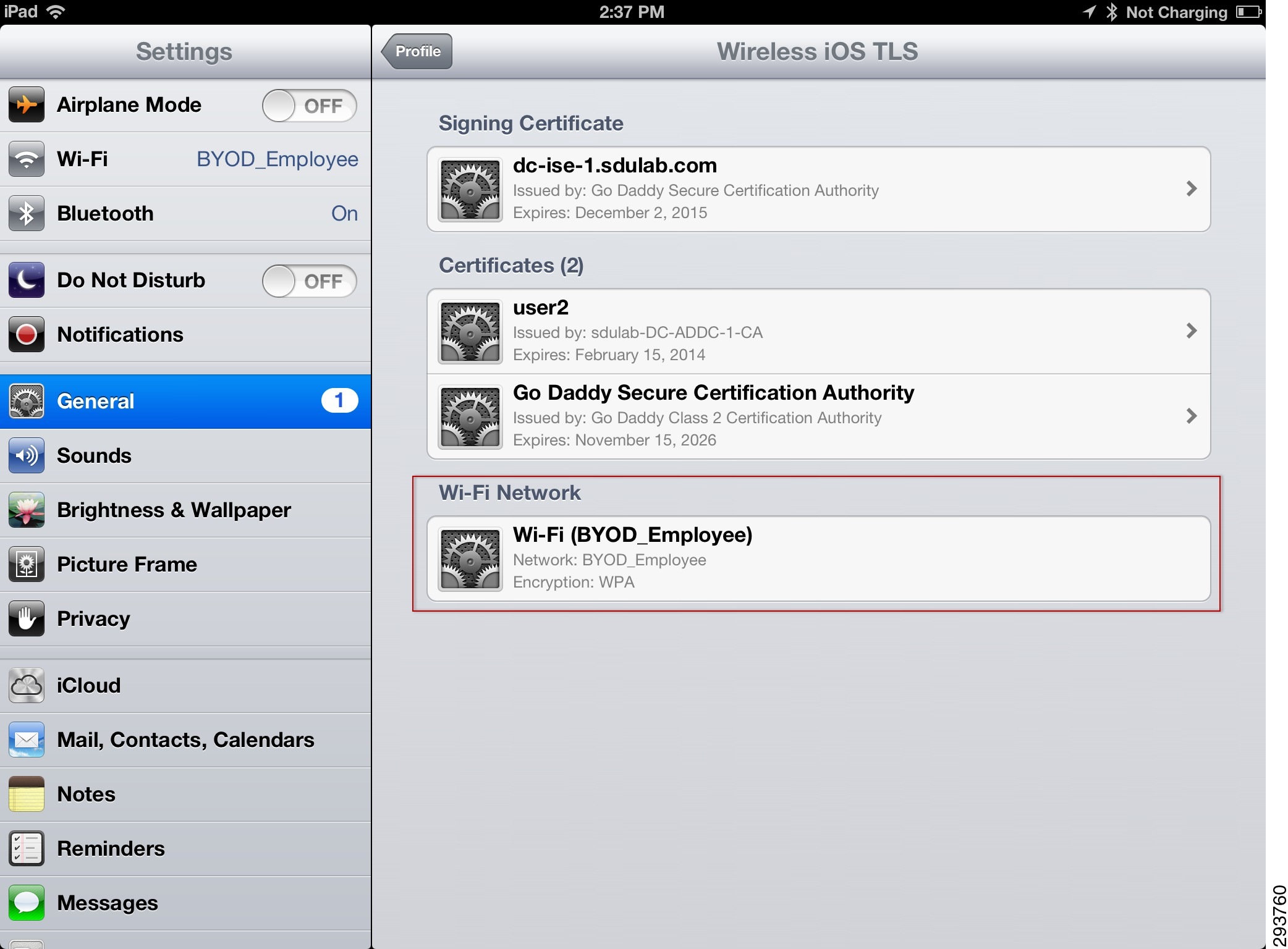 As shown in Figure 19-5, the ISE maintains a detailed log of the authentications as they take place:

Figure 19-6 shows in more detail the steps that took place and how the rule was evaluated to grant Partial Access. The user experience is very similar when provisioning Android devices. The employee is redirected to the Guest Registration portal and is allowed to enter a description for the new device. The employee is then redirected to Google Play where the Cisco SPW for Android may be downloaded. The SPW is launched and the provisioning process begins. The SPW discovers the ISE and begins downloading the profile and installing the certificates. 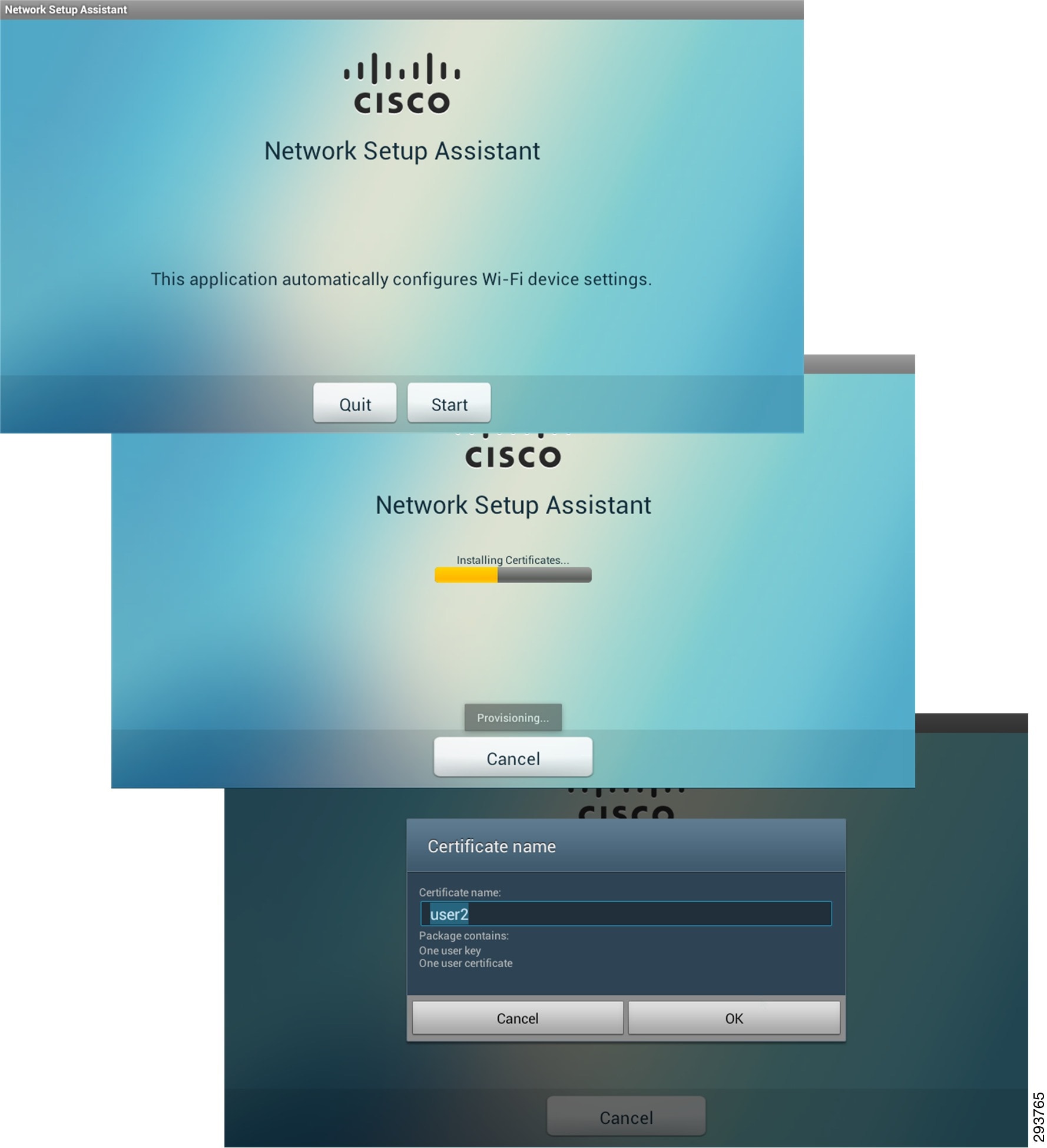 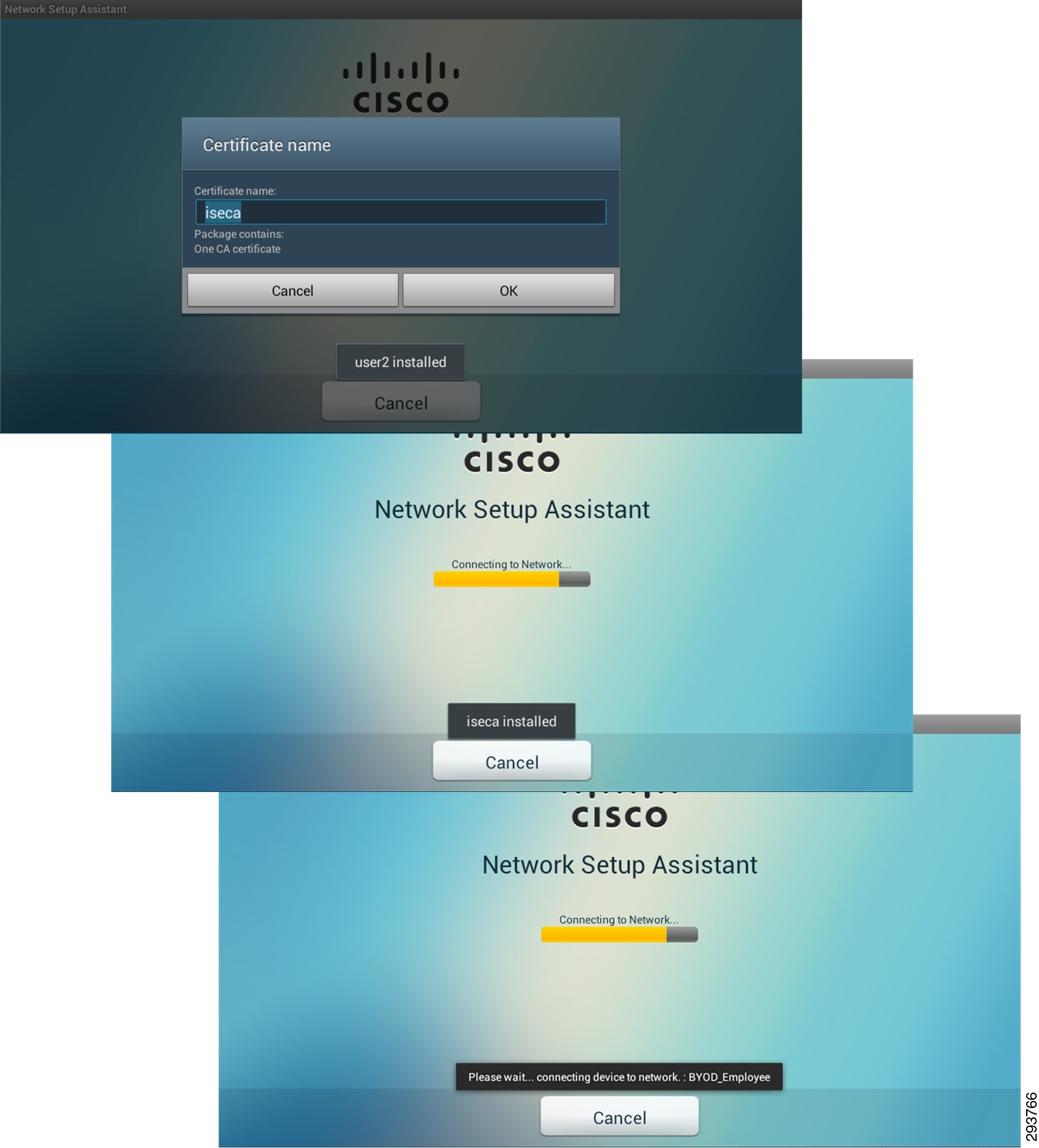 Without employee intervention, the provisioning process automatically connects the Android device to the BYOD_Employee SSID, as shown in Figure 19-11. Figure 19-12 shows how the device is automatically connected to the secure BYOD_Employee SSID.

The user experience while provisioning a Windows device is very similar, redirecting the session to the Guest Registration portal and asking the employee for authentication.

Some Windows devices have multiple network adapters, for example, a laptop with both wired and wireless adapter. The network security policy checks that the device mac-address (sent using calling-station-id attribute) matches the SAN field of the device digital certificate before allowing access. This is done to prevent spoofing. Since each adapter has a unique mac-address, the anti-spoofing policy check can cause difficulties for devices with multiple adapters. If a device registers with a wired adapter, it will obtain a digital certificate with the mac-address of the wired adapter. If the same device attempts to later authenticate to the secure wireless network, most operating systems will attempt to the use the wired adapter certificate for authentication and will fail because the mac-address of the wireless adapter will not match the SAN field of the digital certificate. To avoid this problem, a device with multiple adapters must register both the wired and wireless adapter.

There are two methods for provisioning wireless devices:

For the Dual SSID method, the wired and wireless adapters may be provisioned in any order. For example, if the device associates with the provisioning SSID (which supports MAB) and is successfully provisioned, then subsequently connects with the wired adapter, 802.1X will fail because of the anti-spoofing check in the policy and the user will be re-directed to complete the provisioning process. Thereafter, the device can access the network with either adapter.

After authenticating at the portal and entering a description for the new Windows device, the SPW is downloaded. 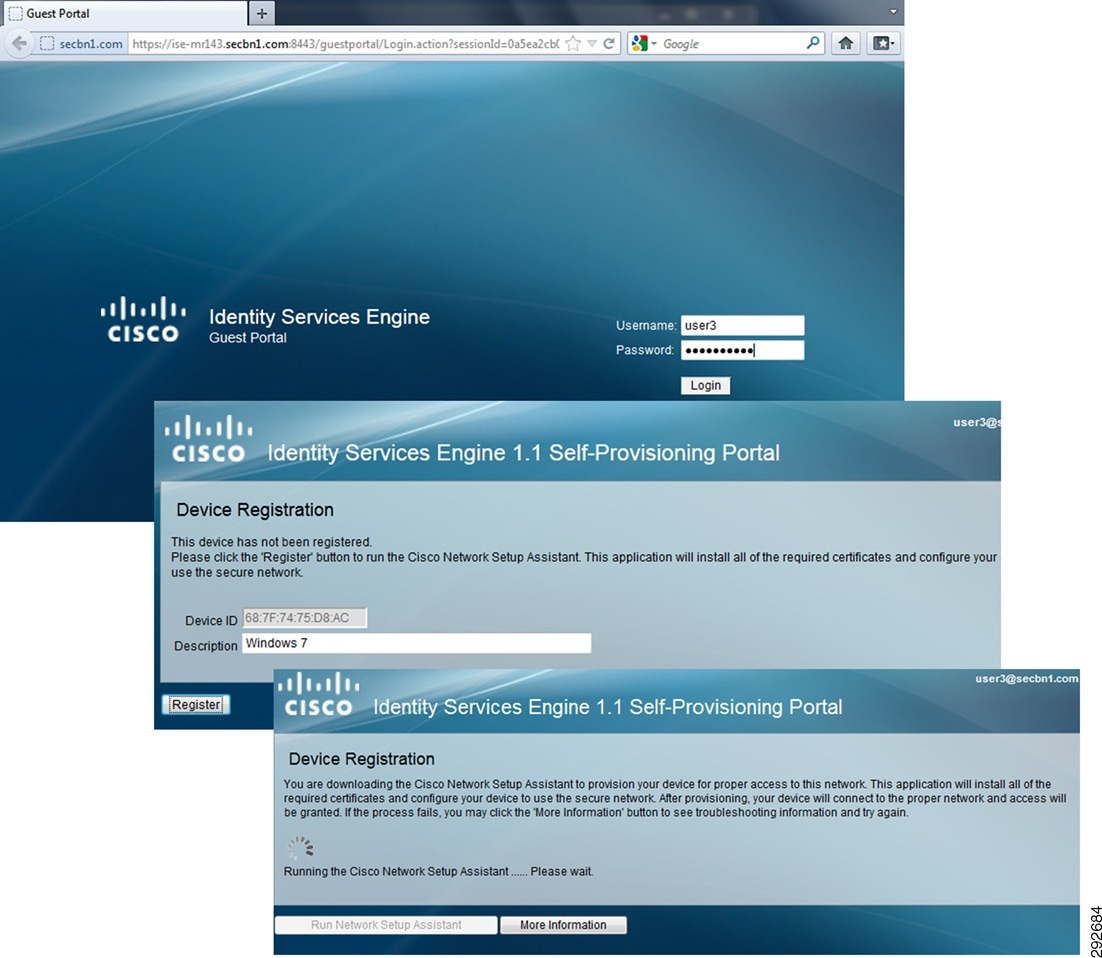 The SPW is launched to install the profile, the keys are generated, and the certificate enrollment takes place. 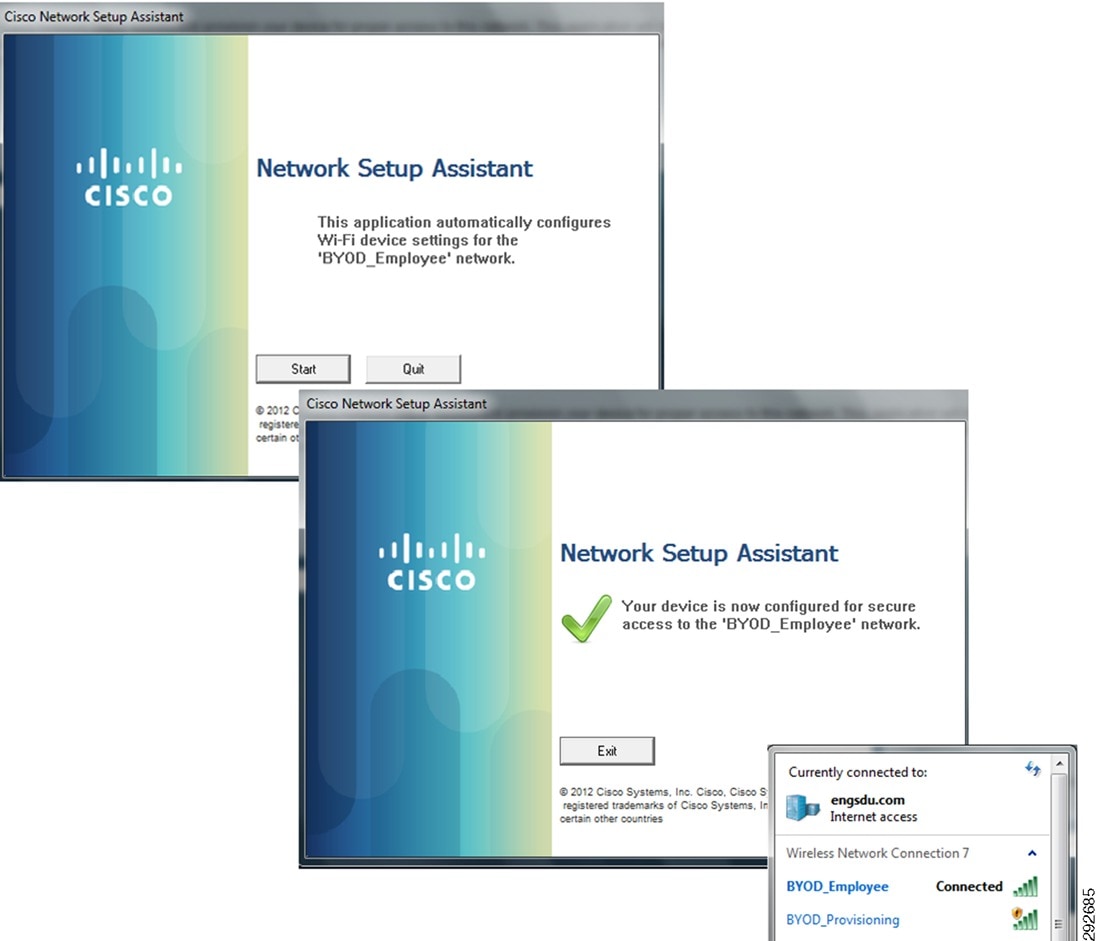 The user experience is very similar, but instead of configuring access to a secure SSID, the SPW configures the devices to connect via a wired connection. 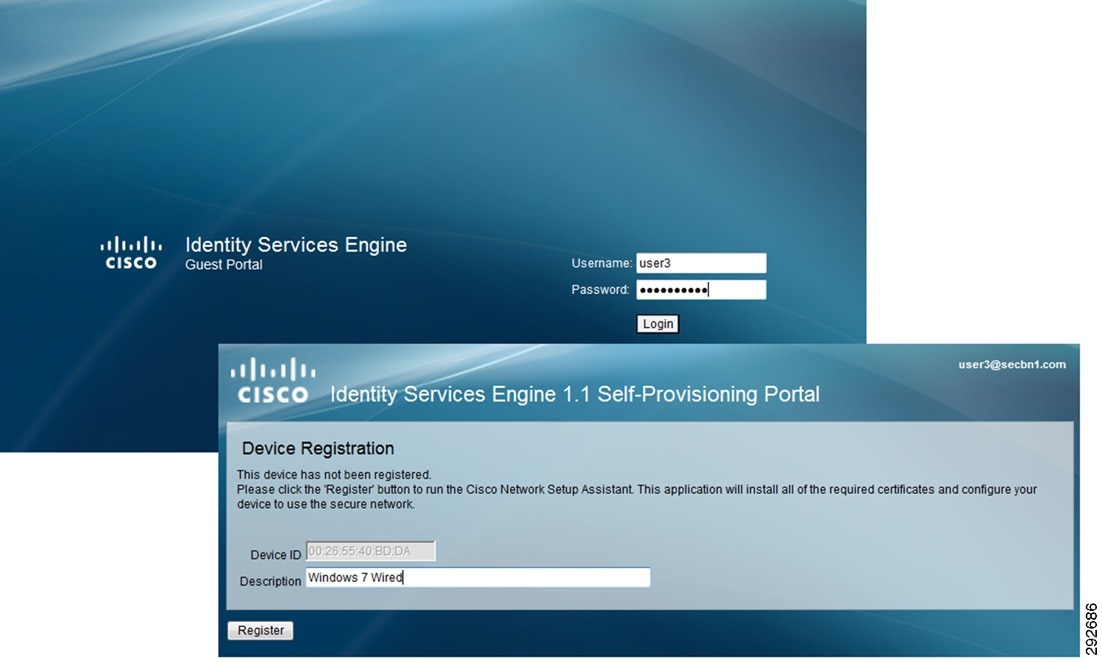 The SPW is downloaded and the proper configurations are applied to the device. 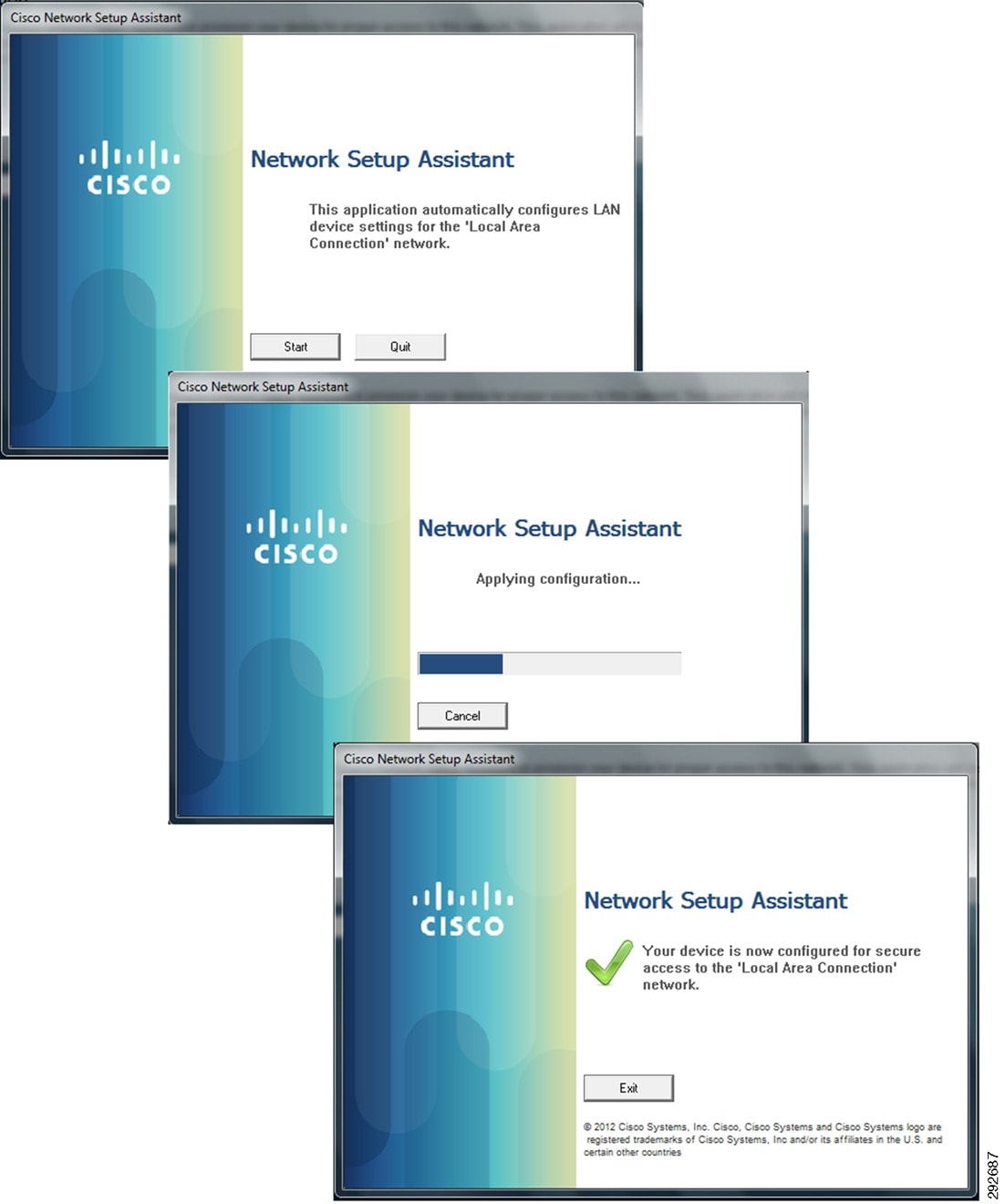 The user experience while provisioning a Mac OS X wired device is also very similar, redirecting the session to the Guest Registration portal and asking the employee for authentication. The SPW is downloaded and installed. 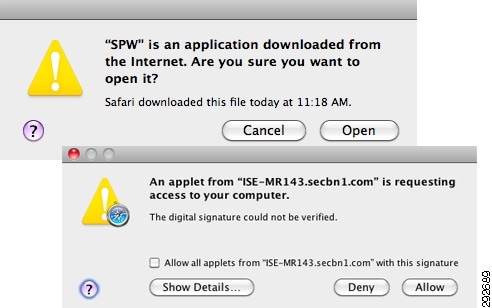 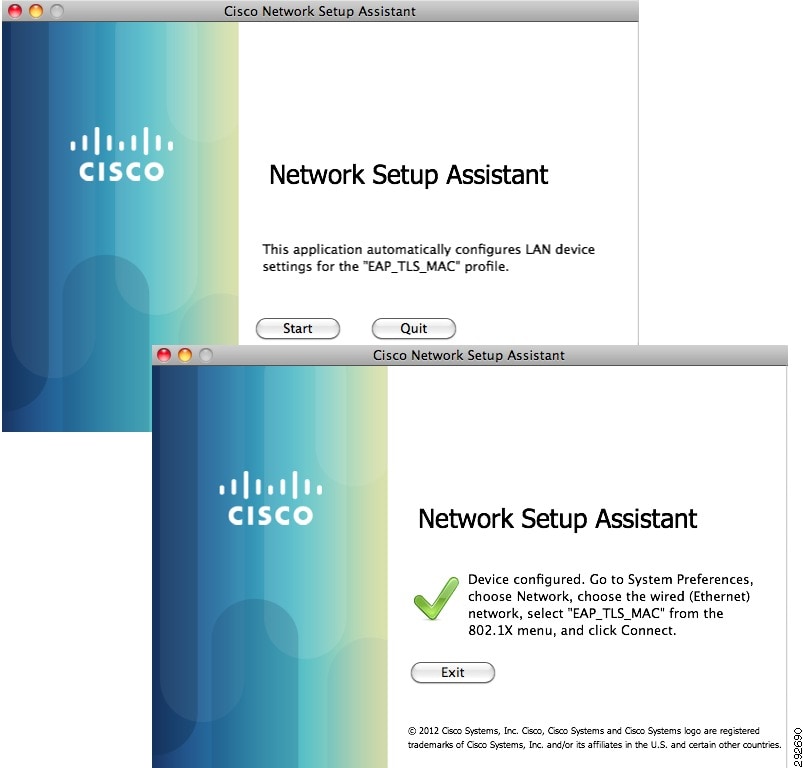 The network settings in Figure 19-20 show the new EAP_TLS_MAC configuration. 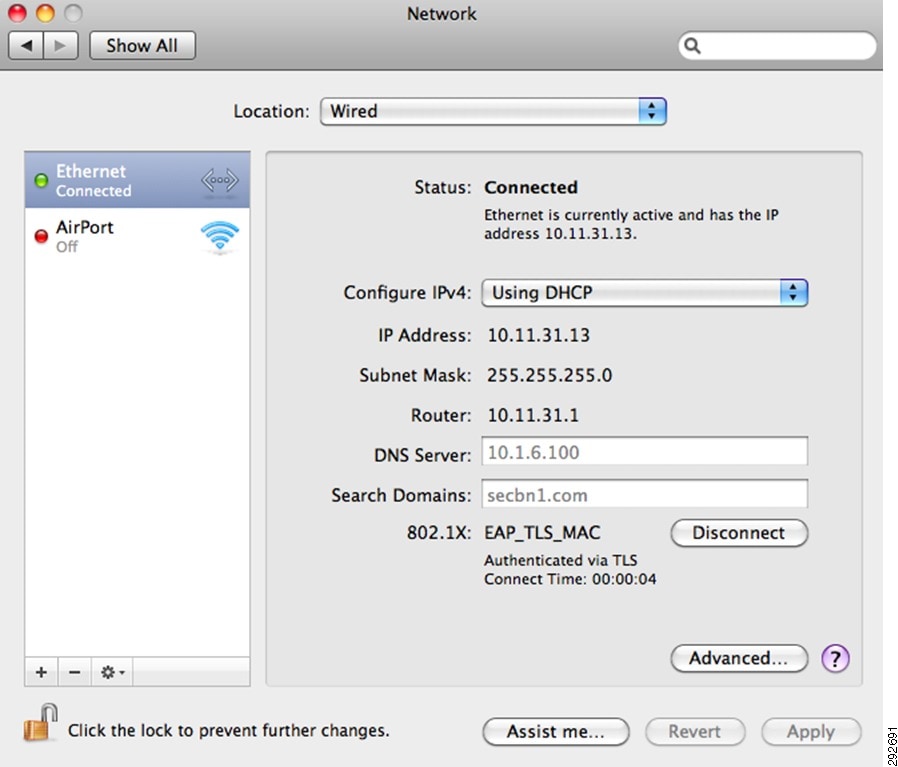