Multiple SSIDs on Wireless Devices in the Access Point Role

SSIDs on Wireless Devices in Other Roles

Steps for Configuring MBSSIDs on an Interface

The SSID is a unique token that identifies an 802.11 wireless network. It is used by wireless devices to identify a network and to establish and maintain wireless connectivity. An SSID must be configured and assigned to a wireless client device interface before the device can associate with an access point.

Multiple SSIDs on Wireless Devices in the Access Point Role

You can configure up to 16 SSIDs on a wireless device in the role of an access point and configure a unique set of parameters for each SSID. For example, you might use one SSID to allow guests to have limited access to the network and another SSID to allow authorized users to have access to secure data.

SSIDs on Wireless Devices in Other Roles

In the role of a wireless bridge, typically the bridges are configured with one SSID because a bridge does not associate wirelessly with clients. (A wireless device in the role of a workgroup bridge can associate with wireless clients and might be configured with multiple SSIDs. For a complete description of wireless device roles, see the "Roles and the Associations of Wireless Devices" module.)

SSIDs are created globally and then assigned to an interface. The SSID is inactive until you use the ssid configuration command in interface mode to assign the SSID to a specific radio interface.

In Cisco IOS Release 12.3(4)JA and later, you can configure SSIDs globally or on a specific radio interface. When you create an SSID using the ssid interface command, the access point stores the SSID in global configuration mode.

These are the parameters you can configure for each SSID:

If your network uses VLANs, you can assign one SSID to a VLAN. Client devices that use the SSID are grouped in that VLAN.

For example, in the following sample output from a show configuration command in privileged EXEC mode, there are no spaces shown in the SSIDs:

The SSIDs appear to be identical, but in fact they are unique as a result of trailing spaces. Spaces are shown in the SSIDs in the following sample output from a show dot11 associations command in privileged EXEC mode:

SSIDs created in Cisco IOS Releases 12.4 or later become invalid if you downgrade the Cisco IOS software to an earlier release.

To create a global SSID, follow these steps, beginning in privileged EXEC mode. After you create an SSID, you can assign it to specific radio interfaces.

Configure the SSID for RADIUS accounting

Assign the SSID to a radio interface

Use this command to view configuration details for SSIDs that are created globally:

To enable a guest mode SSID, create the SSID and use the guest-mode command. For example:

To disable a guest mode SSID, use the no guest-mode command.

Configure the SSID for guest mode

Assign the SSID to a radio interface

When multiple basic service set identifiers (BSSIDs) are enabled on the access point, the SSIDL IE does not contain a list of SSIDs; it contains only extended capabilities. (See the "Multiple Basic SSIDs" section to see how to include multiple SSIDs in a beacon.)

To include an SSID in an SSIDL IE, follow these steps, beginning in privileged EXEC mode:

IP redirection for an SSID on an access point redirects all packets sent from client devices associated to that SSID to a specific IP address.

IP redirection is used mainly on wireless LANs serving handheld devices that use a central software application and are statically configured to communicate with a specific IP address. For example, the wireless LAN administrator at a retail store or warehouse might configure IP redirection for its bar code scanners, which all use the same scanner application and all send data to the same IP address.

When you ping from the access point to a client device that is associated by using an IP-redirect SSID, the response packets from the client are redirected to the specified IP address and are not received by the terminal that initiated the ping. 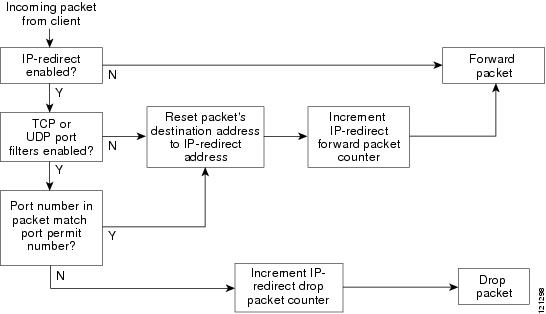 Keep these guidelines in mind when using IP redirection:

The access point does not redirect broadcast, unicast, or multicast BOOTP/DHCP packets from client devices.

To configure IP redirection for an SSID, follow these steps, beginning in privileged EXEC mode:

The following example shows how to configure IP redirection for an SSID without applying an ACL. The access point redirects all packets that it receives from client devices associated to the SSID batman to the IP address:

This section describes how to enable MBSSIDs on an access point radio interface.

To configure MBSSIDs, your access points must meet these minimum requirements:

VLANs must be configured.

Keep these guidelines in mind when configuring MBSSIDs:

When you enable BSSIDs, the access point automatically maps a BSSID to each SSID. You cannot manually map a BSSID to a specific SSID.

When MBSSIDs are enabled on the access point, the SSIDL IE does not contain a list of SSIDs; it contains only extended capabilities.

The guest-mode SSID and delivery traffic indicator message (DTIM) period configured in this command are applied only when MBSSIDs are enabled on the radio interface.

When client devices receive a beacon that contains a DTIM, they "wake up" to check for pending packets. Longer intervals between DTIMs let battery-powered clients "sleep" longer and preserve power. Conversely, shorter DTIM periods reduce the delay in receiving packets but use more battery power because clients "wake up" more often.

Any Wi-Fi-certified client device can associate to an access point by using MBSSIDs.

You can enable MBSSIDs on access points that participate in wireless domain services (WDS).

Steps for Configuring MBSSIDs on an Interface

To configure MBSSIDs on an interface, follow these steps, beginning in privileged EXEC mode:

Designate the SSID as a BSSID

Specify that the BSSID is included in beacons

Set a DTIM period for the BSSID

Assign the SSID visitor to the radio interface

To display the relationship between SSIDs and BSSIDs or MAC addresses, use the show dot11 bssid command in privileged EXEC mode . The following is sample output for the command:

To prevent unauthorized client devices from associating to the access point, you can create a list of authorized SSIDs on your RADIUS authentication server.

The RADIUS SSID authorization process consists of these steps:

The RADIUS server returns a list of SSIDs that the client is allowed to use. The access point checks the list for a match of the SSID used by the client. There are three possible outcomes:

If the SSID that the client used to associate to the access point matches an entry in the allowed list returned by the RADIUS server, the client is allowed network access after completing any other authentication requirements.

If the RADIUS server does not return any SSIDs (no list) for the client, then the administrator has not configured the list, and the client is allowed to associate and attempt to authenticate.

In this example, the following AV pair adds the SSID batman to the list of allowed SSIDs for a user:

For instructions on configuring the access point to recognize and use VSAs, see the "RADIUS Vendor-Specific Attributes and RADIUS Disconnect-Cause Attribute Values" chapter of the Cisco IOS Security Configuration Guide at the following URL:

To create a global SSID with RADIUS accounting, follow these steps, beginning in privileged EXEC mode:

Networks must be protected from security threats, such as viruses, worms, and spyware. These security threats disrupt business, causing downtime and continual patching. Endpoint visibility and control are needed to help ensure that all wired and wireless devices that attempt to access a network meet corporate security policies. Infected or vulnerable endpoints must be automatically detected, isolated, and cleaned.

Network Admission Control (NAC) ensures that all wired and wireless endpoint devices (such as PCs, laptops, servers, and PDAs) that access network resources are adequately protected from security threats. NAC allows organizations to analyze and control all devices that access the network. By ensuring that every endpoint device complies with corporate security policy and is running the latest and most relevant security protections, organizations can significantly reduce or eliminate endpoint devices as a common source of infection or network compromise.

Each SSID has up to three additional VLANs configured as "unhealthy" VLANs. Infected clients are placed on one of these VLANs, based on how the client is infected. When a client sends an association request, it includes its infected status in the request to the RADIUS server. The policy to place the client on a specific VLAN is provisioned on the RADIUS server.

The configured VLANs are different, and no VLAN overlap within an SSID is allowed. Therefore, a VLAN can be specified once and cannot be part of two different SSIDs per interface.

Data corresponding to the all the backup VLANs are sent and received using the BSSID that is assigned to the SSID. Therefore, all clients (healthy and unhealthy) listening to the BSSID corresponding with the SSID "wake up." If the multicast key being used corresponds to the VLAN (healthy or unhealthy), packet decrypting takes place on the client. Wired-side traffic is segregated because different VLANs are used, thereby ensuring that traffic from infected clients and traffic from uninfected clients do not mix.

This feature supports only Layer 2 mobility within VLANs. Layer 3 mobility using network ID is not supported in this feature.

Before you attempt to enable NAC for MBSSID on your access points, you should first have NAC working properly. Figure 2 shows a typical network setup.

For additional information, see the documentation for deploying NAC for Cisco wireless networks.

Configure your network as shown in Figure 2.

Configure the local profiles on the ACS server for posture validation.

Configure the client and access point to allow the client to successful authenticate using EAP-FAST.

Ensure that the client posture is valid.

A sample configuration is shown below.