Election of the Spanning-Tree Root

STP is a Layer 2 link management protocol that provides path redundancy while preventing loops in the network. For a Layer 2 network to function properly, only one active path can exist between any two stations. Spanning-tree operation is transparent to end stations, which cannot detect whether they are connected to a single LAN segment or to a LAN of multiple segments.

When you create fault-tolerant internetworks, you must have a loop-free path between all nodes in a network. The spanning-tree algorithm calculates the best loop-free path throughout a Layer 2 network. Infrastructure devices such as wireless bridges and switches send and receive spanning-tree frames, called bridge protocol data units (BPDUs), at regular intervals. The devices do not forward these frames but use them to construct a loop-free path.

Multiple active paths among end stations cause loops in the network. If a loop exists in the network, end stations might receive duplicate messages. Infrastructure devices might also learn end-station MAC addresses on multiple Layer 2 interfaces. These conditions result in an insecure network.

STP defines a tree with a root device and a loop-free path from the root to all infrastructure devices in the Layer 2 network.

The bridge maintains a separate spanning-tree instance for each active VLAN configured on it. A bridge ID, consisting of the bridge priority and the MAC address, is associated with each instance. For each VLAN, the bridge with the lowest bridge ID becomes the spanning-tree root for that VLAN.

Cisco bridges are interoperable when STP is enabled and no VLANs are configured. This configuration is the only one possible, for the following reasons:

When STP is disabled, the bridge acts as an access point and disallows association of non-root bridge.

Incompatibilities between single and multiple instances of STP can cause inconsistent blocking of traffic when VLANs are configured. When the native VLAN is blocked, bridge flapping can occur.

Therefore, the best configuration for STP interoperability is to have the bridge STP feature enabled and VLANs not configured.

When Cisco bridges are configured as workgroup bridges, they can operate with STP disabled and allow for associations with access points. However, this configuration is not technically a bridge-to-bridge scenario.

The stable, active spanning-tree topology of a network is determined by the following factors:

When the bridges in a network are powered up, each bridge functions as the STP root. The bridges send configuration BPDUs through the Ethernet and radio ports. The BPDUs communicate and compute the spanning-tree topology. Each configuration BPDU contains this information:

The spanning-tree path cost to the root

The bridge ID of the sending bridge

The identifier of the sending interface

Values for the hello, forward delay, and max-age protocol timers

When a bridge receives a configuration BPDU that contains information superior (lower bridge ID, lower path cost, and so forth), it stores the information for that port. If this BPDU is received on the root port of the bridge, the bridge also forwards it with an updated message to all attached LANs for which it is the designated bridge.

One bridge is elected as the spanning-tree root.

The shortest distance to the spanning-tree root is calculated for each bridge based on the path cost.

Interfaces that are included in the spanning-tree instance are selected. Root ports and designated ports are put in the forwarding state.

All interfaces that are not included in the spanning tree are blocked.

Election of the Spanning-Tree Root

All bridges in the Layer 2 network that are participating in STP gather information about other bridges in the network by exchanging BPDU data messages. This message exchange results in these actions:

The election of a designated bridge for every LAN segment

Table 1 describes the timers that affect the entire spanning-tree performance. 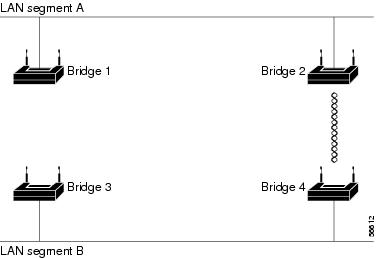 Propagation delays can occur when protocol information passes through a wireless LAN. As a result, topology changes can take place at different times and at different places in the network. When an interface transitions directly from nonparticipation in the spanning-tree topology to the forwarding state, it can create temporary data loops. Interfaces must wait for new topology information to propagate through the LAN before starting to forward frames. They must allow the frame lifetime to expire for forwarded frames that have used the old topology.

Each interface on a bridge using spanning tree exists in one of these states:

Blocking—The interface does not participate in frame forwarding.

Listening—The first transitional state after the blocking state, in which the spanning tree determines that the interface should participate in frame forwarding.

Disabled—The interface is not participating in spanning tree because there is a port shutdown, there is no link on the port, or no spanning-tree instance is running on the port.

From initialization to blocking

From blocking to listening or to disabled

From listening to learning or to disabled

From learning to forwarding or to disabled

From forwarding to disabled

Figure 2 illustrates how an interface moves through the states. 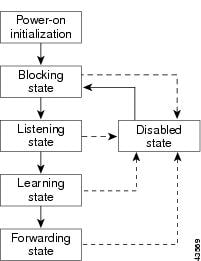 When you enable STP on the bridge, the Ethernet and radio interfaces go through the blocking state and the transitory states of listening and learning. STP stabilizes each interface at the forwarding or blocking state.

The interface is in the listening state while STP waits for protocol information to transition the interface to the blocking state.

In the learning state, the interface continues to block frame forwarding as the bridge learns end-station location information for the forwarding database.

An interface in the blocking state does not participate in frame forwarding. After initialization, a BPDU is sent to the bridge's Ethernet and radio ports. A bridge initially functions as the spanning-tree root until it exchanges BPDUs with other bridges. This exchange establishes which bridge in the network is the spanning-tree root. If there is only one bridge in the network, no exchange occurs, the forward-delay timer expires, and the interfaces move to the listening state. An interface always enters the blocking state when you enable STP.

An interface in the blocking state performs as follows:

If a port is blocked, some broadcast or multicast packets can reach a forwarding port on the bridge and cause the bridging logic to switch the blocked port into listening state momentarily before the packets are dropped at the blocked port.

An interface in the listening state performs as follows:

An interface in the learning state performs as follows:

An interface in the forwarding state performs as follows:

Receives and forwards frames received on the port

A disabled interface performs as follows:

Does not receive BPDUs

You complete three major steps to configure STP on the WMIC:

If necessary, assign interfaces and subinterfaces to bridge groups

Enable STP for each bridge group

Set the STP priority for each bridge group

STP is disabled by default. Table 2 lists the default STP settings when you enable STP.

To configure STP on the WMIC, follow these steps, beginning in privileged EXEC mode:

These configuration examples show how to enable STP on root and non-root bridges with and without VLANs:

This example shows the configuration of a root device with no VLANs configured and with STP enabled:

This example shows the configuration of a non-root bridge with STP enabled and no VLANs configured:

This example shows the configuration of a root device with VLANs configured with STP enabled:

This example shows the configuration of a non-root bridge with VLANs configured with STP enabled:

To display the spanning-tree status, use one or more of the commands in Table 3 in privileged EXEC mode:


For information about other keywords for the show spanning-tree privileged EXEC command, refer to the Cisco IOS Command Reference for Cisco Access Points and Bridges.