Benefits to the ISPs

Benefits to the Enterprise Customers

A virtual private network (VPN) is a network that extends remote access to users over a shared infrastructure. VPNs maintain the same security and management policies as a private network. They are the most cost effective method of establishing a point-to-point connection between remote users and an enterprise customer's network.

Extranet VPNs—Link outside customers, suppliers, partners, or communities of interest to an enterprise customer's network over a shared infrastructure using dedicated connections. Extranet VPNs differ from intranet VPNS in that they allow access to users outside the enterprise.

The main attraction of access VPNs is the way they delegate responsibilities for the network. The enterprise customer outsources the responsibility for the information technology (IT) infrastructure to an Internet service provider (ISP) that maintains the modems that the remote users dial into (called modem pools), access servers, and internetworking expertise. The enterprise customer is then only responsible for authenticating its users and maintaining its network.

Access VPNs connect a variety of users: from a single, mobile employee to an entire branch office. illustrates the following methods of logging on to access VPNs:

Mobile PC by using a modem 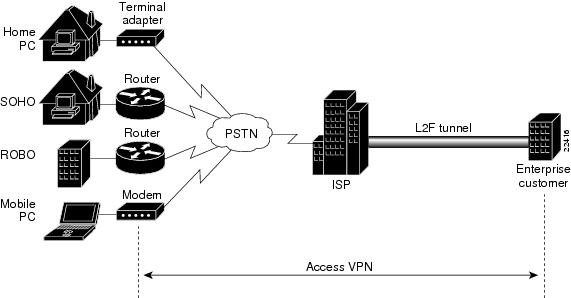 This document does not provide information on the entire spectrum of VPNs, nor does it cover all the details necessary to establish a network. Instead, this document focuses on a specific Layer 2 Forwarding (L2F) case study.

Access VPNs are designed based on one of two architectural options: client-initiated or network access server (NAS)-initiated access VPNs. A NAS is an access server, maintained by the ISP, that users dial in to and that forwards the call to the enterprise network.

NAS-initiated access VPNs—Users dial in to the ISP's NAS, which establishes an encrypted tunnel to the enterprise's private network. NAS-initiated VPNs are more robust than client-initiated VPNs, allow users to connect to multiple networks by using multiple tunnels, and do not require the client to maintain the tunnel-creating software. NAS-initiated VPNs do not encrypt the connection between the client and the ISP, but this is not a concern for most enterprise customers because the PSTN is much more secure than the Internet.

ISP—Responsible for maintaining the modem pool, access servers, and internetworking expertise. Often, the ISP will lease its IT infrastructure to smaller ISPs.

Enterprise Customer—Responsible for maintaining its user database and private network. Often, the enterprise customer is a smaller ISP that does not want to take on the expense and commitment of establishing its own IT infrastructure.

Access VPNs benefit both ISPs and enterprise customers as described in the following sections.

Benefits to the ISPs

Allows expansion to broadband technologies (such as DSL, cable, and wireless) as they become available

Benefits to the Enterprise Customers

Allows enterprise customers to focus on their core business responsibilities

Access VPNs use L2F tunnels to tunnel the link layer of high-level protocols (for example, PPP frames or asynchronous High-Level Data Link Control). By using such tunnels, it is possible to detach the location of the ISP's NAS from the location of the enterprise customer's home gateway, where the dial-up protocol connection terminates and access to the enterprise customer's network is provided.

The following sections give a functional description of the sequence of events that establish the access VPN:

describes the sequence of protocol negotiation events between the ISP's NAS and the enterprise customer's home gateway. 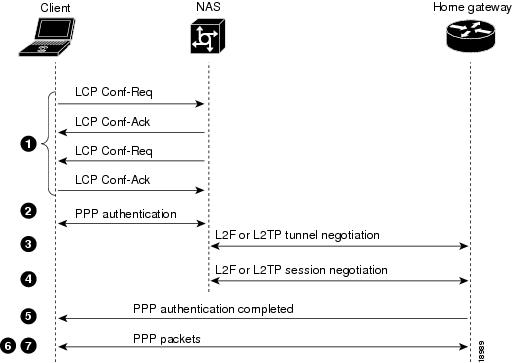 When establishing an access VPN, the client, NAS, and home gateway use three-way CHAP authentication to authenticate the client's username and password. CHAP is a challenge/response authentication protocol in which the password is sent as a 64-bit signature instead of as plain text. This enables the secure exchange of the user's password between the user's client and the home gateway.

First, the NAS challenges the client, and the client responds. The NAS then forwards this CHAP information to the home gateway, which authenticates the client and sends a third CHAP message (either a success or failure message) to the client. 
Once the home gateway authenticates the client, the access VPN is established. The L2F tunnel creates a virtual point-to-point connection between the client and the home gateway. The NAS acts as a transparent packet forwarder.

When subsequent clients dial in to the NAS to be forwarded to the home gateway, the NAS and home gateway do not need to repeat the L2F session negotiation because the L2F tunnel is already open.