This chapter is an overview of proven Cisco solutions for providing architecture designs in the enterprise data center, and includes the following topics:

Another important aspect of the data center design is flexibility in quickly deploying and supporting new services. Designing a flexible architecture that has the ability to support new applications in a short time frame can result in a significant competitive advantage. Such a design requires solid initial planning and thoughtful consideration in the areas of port density, access layer uplink bandwidth, true server capacity, and oversubscription, to name just a few.

The data center network design is based on a proven layered approach, which has been tested and improved over the past several years in some of the largest data center implementations in the world. The layered approach is the basic foundation of the data center design that seeks to improve scalability, performance, flexibility, resiliency, and maintenance. Figure 1-1 shows the basic layered design. 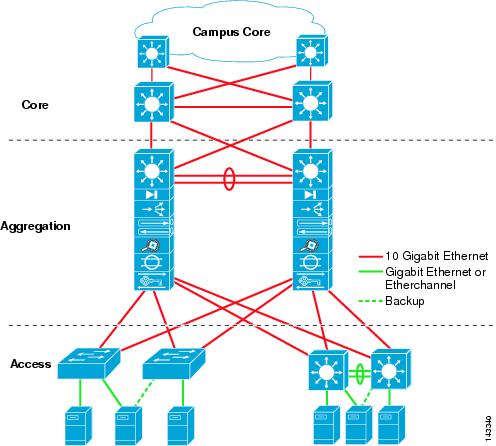 The layers of the data center design are the core, aggregation, and access layers. These layers are referred to extensively throughout this guide and are briefly described as follows:

Core layer—Provides the high-speed packet switching backplane for all flows going in and out of the data center. The core layer provides connectivity to multiple aggregation modules and provides a resilient Layer 3 routed fabric with no single point of failure. The core layer runs an interior routing protocol, such as OSPF or EIGRP, and load balances traffic between the campus core and aggregation layers using Cisco Express Forwarding-based hashing algorithms.

This chapter defines the framework on which the recommended data center architecture is based and introduces the primary data center design models: the multi-tier and server cluster models.

The multi-tier model is the most common design in the enterprise. It is based on the web, application, and database layered design supporting commerce and enterprise business ERP and CRM solutions. This type of design supports many web service architectures, such as those based on Microsoft .NET or Java 2 Enterprise Edition. These web service application environments are used by ERP and CRM solutions from Siebel and Oracle, to name a few. The multi-tier model relies on security and application optimization services to be provided in the network.

The server cluster model has grown out of the university and scientific community to emerge across enterprise business verticals including financial, manufacturing, and entertainment. The server cluster model is most commonly associated with high-performance computing (HPC), parallel computing, and high-throughput computing (HTC) environments, but can also be associated with grid/utility computing. These designs are typically based on customized, and sometimes proprietary, application architectures that are built to serve particular business objectives.

Multi-tier server farms built with processes running on separate machines can provide improved resiliency and security. Resiliency is improved because a server can be taken out of service while the same function is still provided by another server belonging to the same application tier. Security is improved because an attacker can compromise a web server without gaining access to the application or database servers. Web and application servers can coexist on a common physical server; the database typically remains separate. 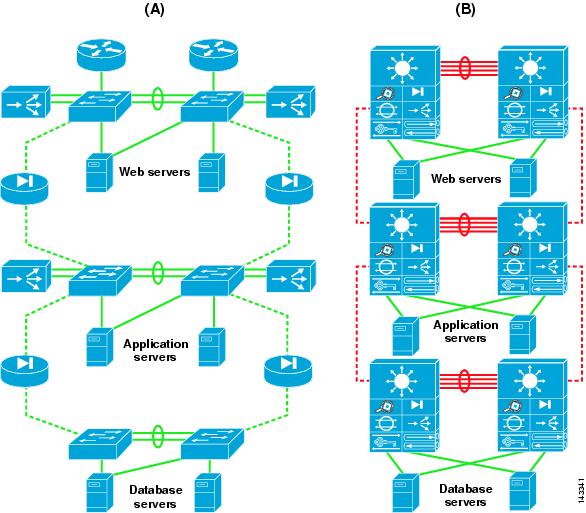 The design shown in Figure 1-3 uses VLANs to segregate the server farms. The left side of the illustration (A) shows the physical topology, and the right side (B) shows the VLAN allocation across the service modules, firewall, load balancer, and switch. The firewall and load balancer, which are VLAN-aware, enforce the VLAN segregation between the server farms. Note that not all of the VLANs require load balancing. For example, the database in the example sends traffic directly to the firewall.

Figure 1-3 Logical Segregation in a Server Farm with VLANs 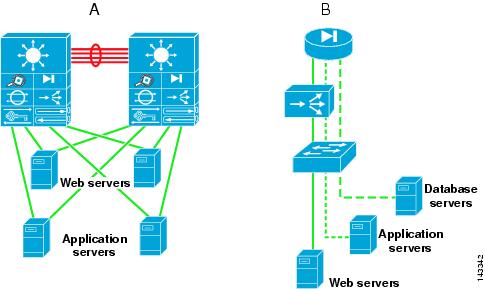 Business security and performance requirements can influence the security design and mechanisms used. For example, the use of wire-speed ACLs might be preferred over the use of physical firewalls. Non-intrusive security devices that provide detection and correlation, such as the Cisco Monitoring, Analysis, and Response System (MARS) combined with Route Triggered Black Holes (RTBH) and Cisco Intrusion Protection System (IPS) might meet security requirements. Cisco Guard can also be deployed as a primary defense against distributed denial of service (DDoS) attacks. For more details on security design in the data center, refer to Server Farm Security in the Business Ready Data Center Architecture v2.1 at the following URL: http://www.cisco.com/en/US/docs/solutions/Enterprise/Data_Center/ServerFarmSec_2.1/ServSecDC.html.

In the modern data center environment, clusters of servers are used for many purposes, including high availability, load balancing, and increased computational power. This guide focuses on the high performance form of clusters, which includes many forms. All clusters have the common goal of combining multiple CPUs to appear as a unified high performance system using special software and high-speed network interconnects. Server clusters have historically been associated with university research, scientific laboratories, and military research for unique applications, such as the following:

In the enterprise, developers are increasingly requesting higher bandwidth and lower latency for a growing number of applications. The time-to-market implications related to these applications can result in a tremendous competitive advantage. For example, the cluster performance can directly affect getting a film to market for the holiday season or providing financial management customers with historical trending information during a market shift.

In the high performance computing landscape, various HPC cluster types exist and various interconnect technologies are used. The top 500 supercomputer list at www.top500.org provides a fairly comprehensive view of this landscape. The majority of interconnect technologies used today are based on Fast Ethernet and Gigabit Ethernet, but a growing number of specialty interconnects exist, for example including Infiniband and Myrinet. Specialty interconnects such as Infiniband have very low latency and high bandwidth switching characteristics when compared to traditional Ethernet, and leverage built-in support for Remote Direct Memory Access (RDMA). 10GE NICs have also recently emerged that introduce TCP/IP offload engines that provide similar performance to Infiniband.

The remainder of this chapter and the information in Chapter 3 "Server Cluster Designs with Ethernet" focus on large cluster designs that use Ethernet as the interconnect technology.

Although high performance clusters (HPCs) come in various types and sizes, the following categorizes three main types that exist in the enterprise environment:

Applications run on all compute nodes simultaneously in parallel.

A master node determines input processing for each compute node.

Can be a large or small cluster, broken down into hives (for example, 1000 servers over 20 hives) with IPC communication between compute nodes/hives.

The client request is balanced across master nodes, then sprayed to compute nodes for parallel processing (typically unicast at present, with a move towards multicast).

This type obtains the quickest response, applies content insertion (advertising), and sends to the client.

The source data file is divided up and distributed across the compute pool for manipulation in parallel. Processed components are rejoined after completion and written to storage.

The traditional high performance computing cluster that emerged out of the university and military environments was based on the type 1 cluster. The new enterprise HPC applications are more aligned with HPC types 2 and 3, supporting the entertainment, financial, and a growing number of other vertical industries. 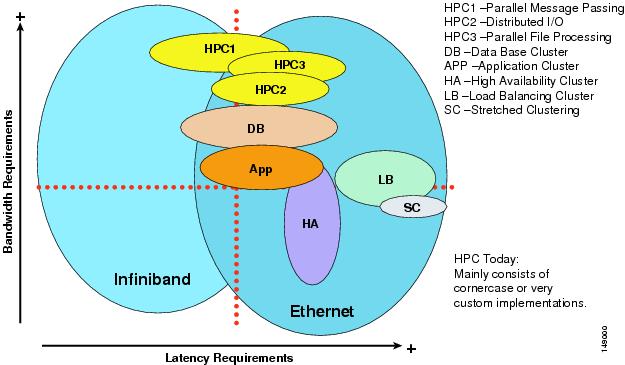 The following section provides a general overview of the server cluster components and their purpose, which helps in understanding the design objectives described in Chapter 3 "Server Cluster Designs with Ethernet."

Figure 1-5 shows a logical view of a server cluster. 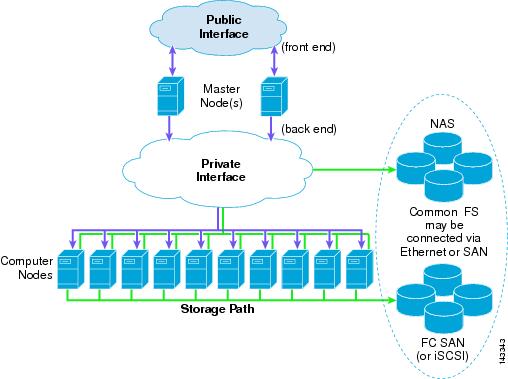 The components of the server cluster are as follows:

Front end—These interfaces are used for external access to the cluster, which can be accessed by application servers or users that are submitting jobs or retrieving job results from the cluster. An example is an artist who is submitting a file for rendering or retrieving an already rendered result. This is typically an Ethernet IP interface connected into the access layer of the existing server farm infrastructure.

Back-end high-speed fabric—This high-speed fabric is the primary medium for master node to compute node and inter-compute node communications. Typical requirements include low latency and high bandwidth and can also include jumbo frame and 10 GigE support. Gigabit Ethernet is the most popular fabric technology in use today for server cluster implementations, but other technologies show promise, particularly Infiniband.

Compute nodes—The compute node runs an optimized or full OS kernel and is primarily responsible for CPU-intense operations such as number crunching, rendering, compiling, or other file manipulation.

Storage path—The storage path can use Ethernet or Fibre Channel interfaces. Fibre Channel interfaces consist of 1/2/4G interfaces and usually connect into a SAN switch such as a Cisco MDS platform. The back-end high-speed fabric and storage path can also be a common transport medium when IP over Ethernet is used to access storage. Typically, this is for NFS or iSCSI protocols to a NAS or SAN gateway, such as the IPS module on a Cisco MDS platform.

Server cluster designs can vary significantly from one to another, but certain items are common, such as the following:

Commodity off the Shelf (CotS) server hardware—The majority of server cluster implementations are based on 1RU Intel- or AMD-based servers with single/dual processors. The spiraling cost of these high performing 32/64-bit low density servers has contributed to the recent enterprise adoption of cluster technology.

GigE or 10 GigE NIC cards—The applications in a server cluster can be bandwidth intensive and have the capability to burst at a high rate when necessary. The PCI-X or PCI-Express NIC cards provide a high-speed transfer bus speed and use large amounts of memory. TCP/IP offload and RDMA technologies are also used to increase performance while reducing CPU utilization.

Low latency hardware—Usually a primary concern of developers is related to the message-passing interface delay affecting the overall cluster/application performance. This is not always the case because some clusters are more focused on high throughput, and latency does not significantly impact the applications. The Cisco Catalyst 6500 with distributed forwarding and the Catalyst 4948-10G provide consistent latency values necessary for server cluster environments.

Jumbo frame support—Many HPC applications use large frame sizes that exceed the 1500 byte Ethernet standard. The ability to send large frames (called jumbos) that are up to 9K in size, provides advantages in the areas of server CPU overhead, transmission overhead, and file transfer time.

Figure 1-6 takes the logical cluster view and places it in a physical topology that focuses on addressing the preceding items. 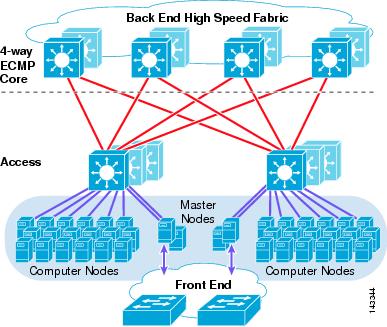 Equal cost multi-path—ECMP support for IP permits a highly effective load distribution of traffic across multiple uplinks between servers across the access layer. Although Figure 1-6 demonstrates a four-way ECMP design, this can scale to eight-way by adding additional paths.

Scalable server density—The ability to add access layer switches in a modular fashion permits a cluster to start out small and easily increase as required.

Scalable fabric bandwidth—ECMP permits additional links to be added between the core and access layer as required, providing a flexible method of adjusting oversubscription and bandwidth per server.

In the preceding design, master nodes are distributed across multiple access layer switches to provide redundancy as well as to distribute load.