About Cisco APIC and IGMP Snooping

How IGMP Snooping is Implemented in the ACI Fabric 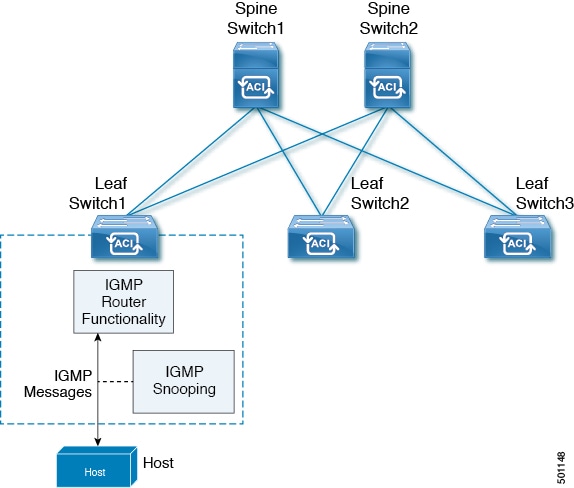 The ACI fabric supports IGMP snooping only in proxy-reporting mode, in accordance with the guidelines provided in Section 2.1.1, "IGMP Forwarding Rules," in RFC 4541:

As a result, the ACI fabric will send IGMP reports with the source IP address of 0.0.0.0.

You can define multiple virtual routing and forwarding (VRF) instances for IGMP snooping.

On leaf switches, you can use the show commands with a VRF argument to provide a context for the information displayed. The default VRF is used if no VRF argument is supplied.

If no more than one host is attached to each switch port, you can configure the fast leave feature in IGMPv2. The fast leave feature does not send last member query messages to hosts. As soon as APIC receives an IGMP leave message, the software stops forwarding multicast data to that port.

IGMPv1 does not provide an explicit IGMP leave message, so the APIC IGMP snooping function must rely on the membership message timeout to indicate that no hosts remain that want to receive multicast data for a particular group.

By default, the IGMP snooping function tracks hosts on each VLAN port in the bridge domain. The explicit tracking feature provides a fast leave mechanism. Because every IGMPv3 host sends membership reports, report suppression limits the amount of traffic that the device sends to other multicast-capable routers. When report suppression is enabled, and no IGMPv1 or IGMPv2 hosts requested the same group, the IGMP snooping function provides proxy reporting. The proxy feature builds the group state from membership reports from the downstream hosts and generates membership reports in response to queries from upstream queriers.

Even though the IGMPv3 membership reports provide a full accounting of group members in a bridge domain, when the last host leaves, the software sends a membership query. You can configure the parameter last member query interval. If no host responds before the timeout, the IGMP snooping function removes the group state.

When PIM is not enabled on an interface because the multicast traffic does not need to be routed, you must configure an IGMP snooping querier function to send membership queries. In APIC, within the IGMP Snoop policy, you define the querier in a bridge domain that contains multicast sources and receivers but no other active querier.

Cisco ACI has by default, IGMP snooping and IGMP snooping querier enabled. Additionally, if the Bridge Domain subnet control has “querier IP” selected, then the leaf switch behaves as a querier and starts sending query packets. Querier on the ACI leaf switch must be enabled when the segments do not have an explicit multicast router (PIM is not enabled). On the Bridge Domain where the querier is configured, the IP address used must be from the same subnet where the multicast hosts are configured.

Guidelines and Limitations for the APIC IGMP Snooping Function

The APIC IGMP snooping has the following guidelines and limitations:

To implement IGMP snooping functionality, you configure an IGMP Snooping policy then assign that policy to one or more bridge domains.

Create an IGMP Snooping policy whose IGMP settings can be assigned to one or multiple bridge domains.

To put this policy into effect, assign it to any bridge domain.

The target bridge domain is now associated with the specified IGMP Snooping policy.

You can assign the IGMP Snooping policy to multiple bridge domains.

IGMP static port grouping enables you to pre-provision ports, that were previously statically-assigned to an application EPG, to enable the switch ports to receive and process IGMP multicast traffic. This pre-provisioning prevents the join latency which normally occurs when the IGMP snooping stack learns ports dynamically.

Static group membership can be pre-provisioned only on static ports assigned to an application EPG.

Static group membership can be configured through the APIC GUI, CLI, and REST API interfaces.

Enabling IGMP snoop processing on ports requires as a prerequisite that the target ports be statically-assigned to associated EPGs.

Static deployment of ports can be configured through the APIC GUI, CLI, or REST API interfaces. For information, see the following topics in the Cisco APIC Layer 2 Networking Configuration Guide:

Before you begin to enable IGMP snooping and multicast for an EPG, complete the following tasks:

The steps described in this task assume the pre-configuration of the following entities:

Before you begin to enable IGMP snooping and multicasting for an EPG, complete the following tasks.

You can enable IGMP snooping and multicast processing on ports that have been statically assigned to an EPG. You can create and assign access groups of users that are permitted or denied access to the IGMP snoop and multicast traffic enabled on those ports.

An “access-group” is used to control what streams can be joined behind a given port.

IGMP snoop access groups can be configured through the APIC GUI, CLI, and REST API interfaces.

Before you enable access to IGMP snooping and multicasting for an EPG, Identify the interfaces to enable this function and statically assign them to that EPG .

The steps described in this task assume the pre-configuration of the following entities: