Chapter: Removing and Replacing FRUs from the Cisco ASR1000-RP3 Module

Removing and Replacing FRUs from the Cisco ASR1000-RP3 Module

This chapter describes procedures for removing and replacing field-replaceable units (FRUs) from the Cisco ASR1000-RP3 module. It contains the following sections:

This section explains how to remove a hard drive assembly from the Cisco ASR1000-RP3 module and replace it with a new internal hard drive.

During this procedure, wear grounding wrist straps to avoid ESD damage to the card. Do not directly touch the backplane with your hand or any metal tool, or you could shock yourself. Statement 94

Before you begin, read the following important notices:

request platform hardware filesystem harddisk: online —Mounts the hard disk on the active RP. If the disk is not provisioned properly, this command will provision the disk.

request platform hardware filesystem stby-harddisk: online —Mounts the hard disk on the standby RP. If the disk is not provisioned properly, this command will provision the disk.

Slip on an ESD-preventive wrist strap.

From the front panel of the RP module, unscrew the fastener screw. Pull out the internal hard drive. 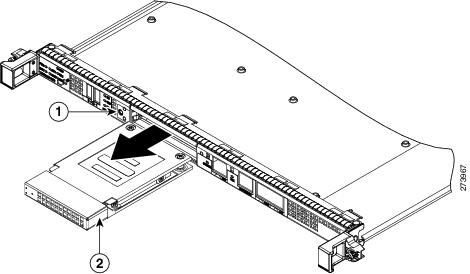 Place the component in an antistatic bag to return it.

Wait until the following console message is displayed:

Carefully slide the internal hard drive unit into the Cisco ASR1000-RP3 faceplate slot. The component is keyed for easy insertion.

Tighten the fastener screw on the front panel.

Wait until the following console message is displayed:

If after several minutes the above message is not displayed, enter the following command:

The only reason the system would not be able to automatically mount the new hard disk following a physical insertion is that the disk is not partitioned correctly.

Verify that the disk is working by entering the following command:

Removing and Replacing the DIMM Memory

The Cisco ASR1000-RP3 module comes with the DIMMs preinstalled. At the time of purchase, you choose the amount of memory you require. Use the procedures listed in this section if you choose to upgrade the memory.

Table 8-1 provides the PID and the memory DIMM slots that are supported in the Cisco ASR1000-RP3 module.

RP2 memory cannot be reused on RP3. For RP3 memory upgrade from 8 GB to either 16 GB or 32 GB or 64 GB, remove all existing DIMMs from the system, and install the new DIMMs pair in the system. This eliminates issues with mismatched DIMMs.

The Cisco ASR 1006-X, Cisco ASR 1009-X, and Cisco ASR 1013 routers have redundant RPs. The following are the steps for removing and replacing the DIMM memory modules on these routers.

Remove the standby RP. See Removing the Cisco ASR1000-RP3 Module from the Router.

Remove the DIMM from the standby RP. See Removing the DIMMs.

Insert the standby RP. See Installing the Cisco ASR1000-RP3 Module in the Router.

Verify the memory upgrade on the standby RP by running the following commands:

Repeat Step 1 through Step 5 on the standby RP.

The Cisco ASR1000-RP3 module already comes with the DIMMs preinstalled. At the time of purchase, you choose the amount of memory you require. Use this procedure only if you want to upgrade the memory.

To ensure the DIMMs are functioning properly, all DIMMs must be replaced at the same time and must be of the same manufacturer and part number. (This is because vendors may have multiple versions of the DIMM.)

With a wrist strap on, loosen the two captive screws on the faceplate of the RP.

Using the handles on both sides of the module, with both hands gently slide the module out of the chassis slot.

Position the RP so that the faceplate is toward you and the edge connector is away from you.

Locate the DIMMs in the RP.

The DIMMs shown in Figure 8-5 and Figure 8-7 are representative and may not look exactly like the DIMMs used on the RP3; but the procedure is the same.

For the DIMM you want to remove, pull down the levers on either side of the DIMM socket outwards to release the DIMM from the socket as shown in Figure 8-5.

When the DIMM is released from the socket, grasp each end of the DIMM with your thumb and forefinger and pull the DIMM completely out of the socket. Handle only the edges of the DIMM; avoid touching the memory module or pins and the metal traces (the metal fingers along the connector edge of the DIMM) along the socket edge.

Place the DIMM in an antistatic bag to protect it from ESD damage.

Repeat Step 5 through Step 8 for the remaining DIMMs if required for the upgrade.

Position the RP so that the faceplate is towards you and the edge connector is away from you.

DIMMs are sensitive components that can be shorted by mishandling; they are susceptible to ESD damage. Handle DIMMs by the edges only and avoid touching the pins.

Remove the new DIMM from the antistatic bag.

Hold the DIMM component-side up, with the connector edge (the metal fingers) closest to you. Hold the ends of the DIMM between your thumb and forefinger as shown in Figure 8-6. 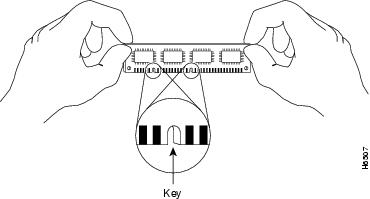 When inserting DIMMs, use firm but not excessive pressure. If you damage a socket, you will have to return the RP to the factory for repair.

Figure 8-7 Installing the DIMM in the Socket

Repeat Step 3 through Step 7 for the remaining DIMMs.

After you have correctly installed the Cisco ASR1000-RP3 DIMMs and reinstalled the RP, the system should reboot properly.

If the system fails to boot properly or if the console terminal displays a checksum or memory error after you have installed new DIMMs, check the following:

If after several attempts the system fails to restart properly, contact a service representative for assistance. Before you call, make note of any error messages, unusual LED states, or any other indications that might help solve the problem.