The last few years have seen explosive growth in network connectivity in two key areas: from new mobility services such as 4G/5G and from the proliferation of IoT applications such as connected homes, factories, utilities, and transportation services. As an example, several hundred million 5G connections are planned over the next few years, with each 5G connection consuming more bandwidth than the corresponding previous-generation 2G, 3G, and 4G/LTE connections. Previous-generation 4G/LTE connections are also growing. These new 4G/LTE/5G connections are driving the need for networking equipment in outdoor environments.

Primary drivers and use cases for I-Temp rated network deployments

IoT is another key driver for new services. The increase in machine-to-machine (M2M) communication and internet-connected endpoints is also causing an explosive growth in network connectivity. Telecom and network equipment manufacturers are in a race to design networking gear that can support the high-bandwidth demands placed by 5G and IoT. Many of these deployments require high-bandwidth, temperature-hardened switches, routers, and optics (hereafter referred to as I-Temp switches/routers and I-Temp optics) to operate reliably. In addition to examining three key application areas, this white paper explains key differentiating attributes of Cisco I-Temp optics.

The increase in number of base stations to support 4G/LTE expansions, and the introduction of 5G, is changing the way Radio Access Networks (RANs) are deployed. The new RANs are a lot denser than previous generations and need to support high-bandwidth and low-latency applications. To support 5G RANs, network equipment vendors have developed specialized xHaul routers (where xHaul refers to either Fronthaul, or Midhaul, or Backhaul). An example of such a Cisco platform is the Cisco NCS 540 converged access router. Figure 2, below shows fiber optic transceivers and NCS 540 deployed in a converged access architecture. Fiber optic transceivers are deployed to haul traffic from 4G/LTE, 5G, and business CPEs back to the Cisco NCS540 access router. With the addition of dense 5G small cells, the support for CPRI is also becoming a requirement. 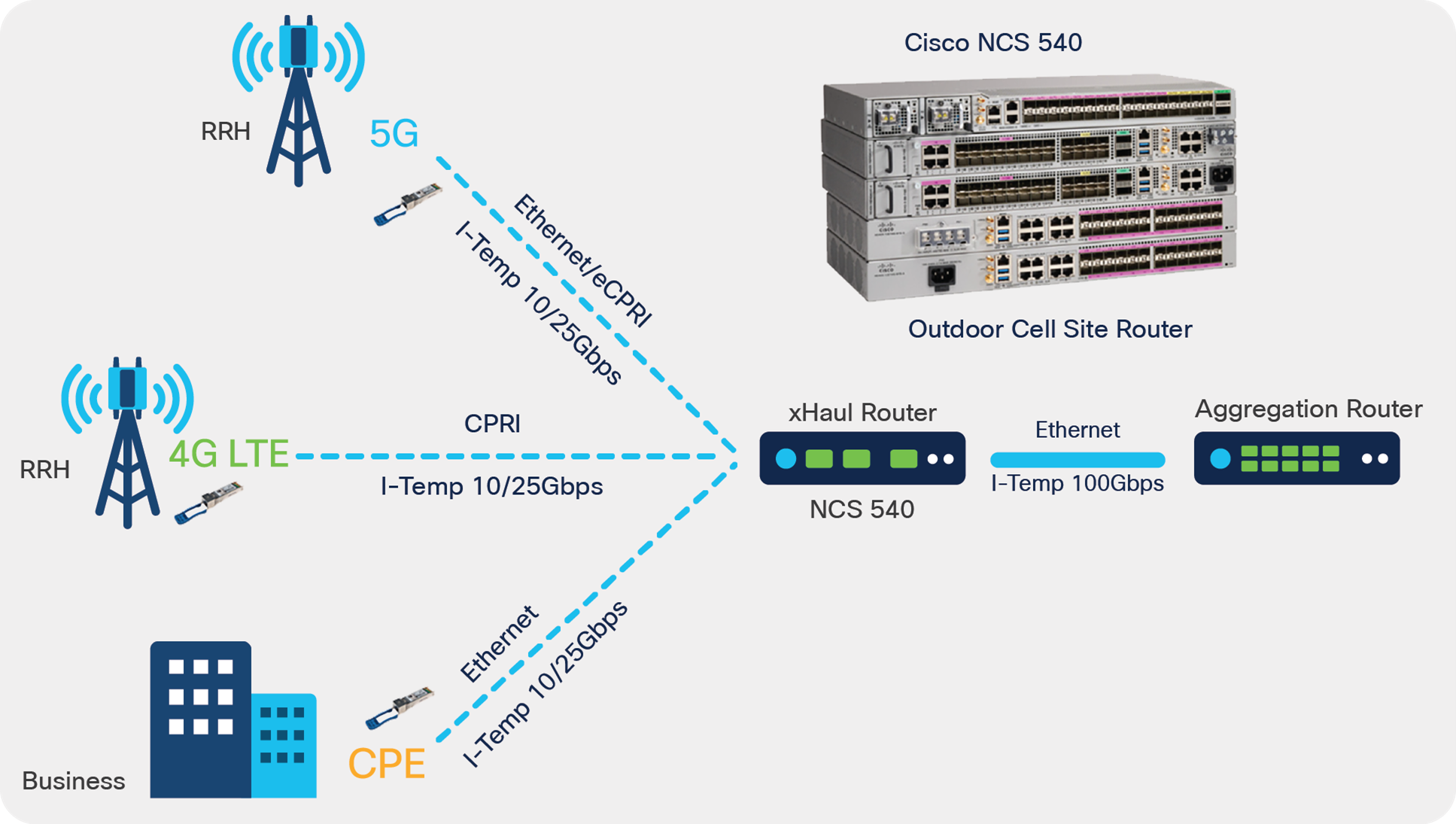 In many converged access deployments, the networking equipment and optics are not in temperature-controlled cabinets, which means that the ambient operating temperature of the platforms can experience large temperature variations. In the summer, the cabinet ambient temperature can be as high as +65°C, whereas in the winters, it could fall to as low as -40°C. This is different from data center deployments where heaters or air conditioners are available to implement temperature control.

To address the needs of converged access applications, Cisco offers the N540X-ACC-SYS routers, which operate with the following ambient temperature range:

If access networks are deployed outdoors with regular optics, then network failures can occur. Debugging intermittent link loss and packet drops is tricky since the failure mechanisms might only get triggered under specific temperature ranges. Given that critical business services are being developed around 5G, interruptions and downtime will be unacceptable to end users. In such applications I-Temp optics are needed, which can operate across a wider temperature range than regular optics. This way, network failure related to optics malfunction can be ruled out.

Modernizing a 100-year-old utility grid represents a key business opportunity for Industrial Ethernet switches, routers, and optics. The key trends driving utility grid modernization include government mandates for the use of renewable energy, increased electricity consumption from EV charging, the replacement of aging utility assets, and the need for improved cybersecurity throughout the grid. Specifically, the predictive maintenance of power generation and transmission equipment is key to achieving reliability. 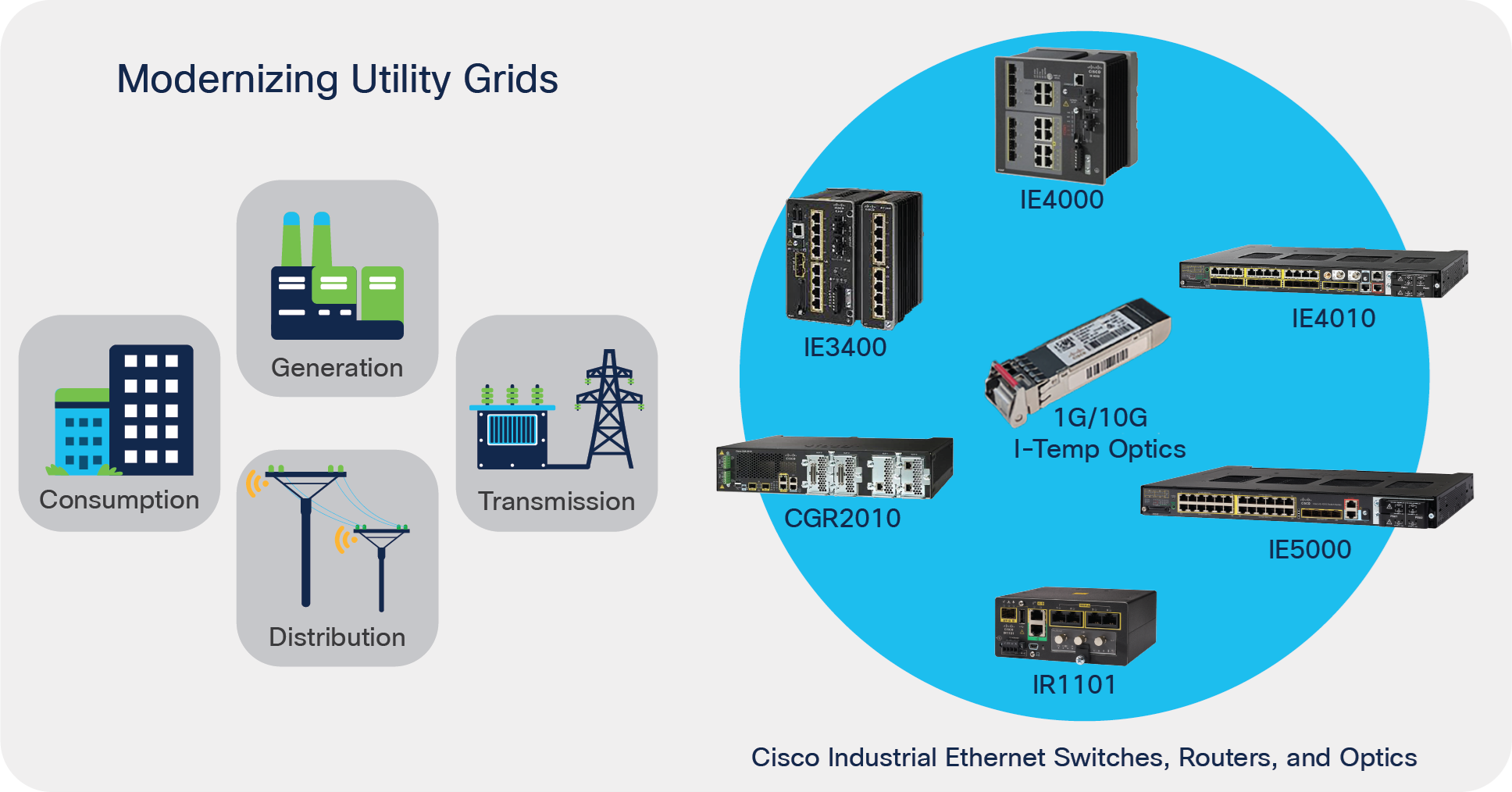 Frequently in such environments, the networking equipment is placed into metal enclosures that have no temperature control. Further, Industrial Ethernet switches are fan-less, making it difficult to cool the optical connections to an ideal temperature. Given the lack of forced cooling and airflow, the optics needs to operate where the case temperature can be as high as 85°C or as low as -40°C! If such networks are deployed without specialized I-Temp optics, network failures can jeopardize the safety and security of the utility grids. Since utility companies are mandated to ensure reliable network operation, I-Temp optics quickly become a necessity, especially as we move to modernize these grids. As shown in Figure 3, Cisco offers the Catalyst Industrial Ethernet ruggedized switches along with 1G/10G I-Temp optics to address such applications.

Another application where I-Temp switches and optics are needed involves intelligent transportation. Today municipalities face challenges from networking solutions deployed in mass transit systems. Not only are these networking solutions aging, but they are also disparate and do not work well together. Improving safety on highways and intersections will reduce car accidents and death rates. A renaissance in transportation systems is needed to improve the prevention and emergency response in the case of car accidents.

This renaissance will come through the deployment of smart traffic lights, machine vision, and smart sensors and the ability to process enormous amounts of data (some of it in real time). To address these challenges, Cisco has developed key software and hardware solutions to implement connected roadways and intersections. 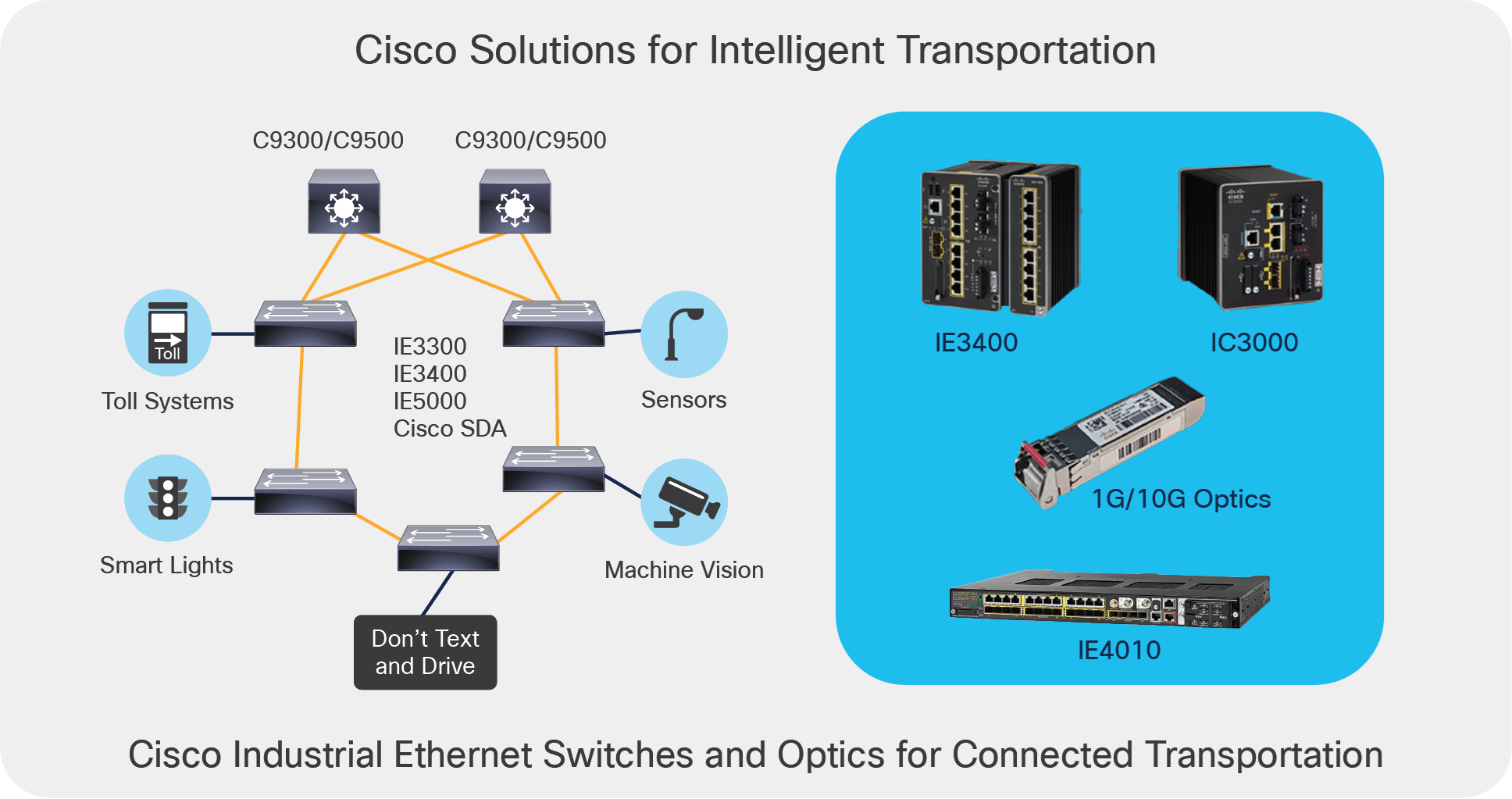 As shown in Figure 4, the Cisco Industrial Ethernet switches (IE3400, IE330, IE5000) are connected to smart sensors, lights, and machine vision cameras, throughout the municipality. These switches are in turn connected in a ring topology that spans several kilometers and terminates at the Catalyst 9000 switch at the head end. Given that these network links are exposed to the harsh elements of nature, I-Temp optics are needed to ensure that the connections between the Industrial Ethernet switches is highly reliable.

The Cisco optics portfolio for 5G and IoT applications

To address applications in both 5G and IoT markets, Cisco has developed a comprehensive portfolio of I-Temp rated 1G, 10G, 25G, and 100G optics. Before exploring the portfolio details, it is important to define the operating ranges of industrial temperature rated optical transceivers.

The following definitions are used to classify optical transceivers. The operating temperature range below refers to the case temperature of the optics.

To identify I-Temp optics and differentiate from the commercial temperature optics, the -RGD suffix or -I suffix is used in the product IDs. (See Table 2 below.)

A good rule of thumb in operating networking equipment is that the case temperature of the optics will get to +20°C higher than the ambient temperature of the cabinet. This means that I-Temp rated optics are required in operating environments where the ambient temperature exceeds +50°C or falls below -20°C. In certain applications, it helps to have a “cold start” capability. Cold start systems can access the transceiver’s low-speed interfaces such as (I2C) at -40°C, but do not carry live traffic until the case temperature has reached -30°C. As a final note, Extended-Temp or “E-Temp” optics are available, which operate at the same higher end of the operating temperature (+85°C) as I-Temp optics. The difference is in the lower end of the operating range, which is -5°C (compared to -40°C for I-Temp).

One key feature requested by network operators is Digital Optical Monitoring (DOM). With optics that offer DOM, the user can monitor in real time parameters of the transceivers such as input/output optical power, case temperature, laser bias current, and transceiver supply voltage. These parameters are monitored against threshold values, and violations are reported in the form of warnings and alarms.

For example, if the case temperature of an industrial temperature optic exceeded +85°C, then a “Temperature High Warning” would be reported. If the temperature went any higher than +90°C, then a “Temperature High Alarm” would be seen. Similar warnings and alarms are reported at the low end of the operating range. These alarms and warnings can alert the host system that the optics are operating outside the specified range. Users can configure Cisco switches and routers to monitor the health of transceivers on a port-by-port basis.

I-Temp rated optics need to operate over a broader temperature range compared to C-Temp rated optics. This is only possible when the design and manufacturing process of I-Temp optics is different from that of C-Temp optics. This means that all the internal components inside the optics such as CMOS semiconductor ICs, laser diodes, photo diodes, and amplifiers now need to operate reliably across a wider temperature range.

So, either these components must be designed from scratch or a binning mechanism is needed to screen the higher tolerance parts. Often thermo-electric coolers are added to maintain laser wavelengths. The higher tolerance range of the components, along with the advanced manufacturing processes, can make the I-Temp optics more expensive to manufacture.

While I-Temp optics can be more expensive, we can expect the transceiver to perform reliably in deployments where the temperature cannot be controlled, as is the case with 5G and IoT applications.

To address both service provider access and IoT applications, Cisco offers I-Temp rated optical transceivers in data rates such as 1G, 10G, 25G, and even 100 Gbps. These also include both single-mode and multimode optics. The portfolio enables connectivity from a few hundred meters to 80 km. Some examples of strategic 1G, 10G, 25G, and 100G I-Temp optics are shown in Figure 5.

While the complete Cisco I-Temp portfolio covers multiple speeds and reaches, the most relevant optics for IoT and 5G connectivity are listed below.

**refers to operating live traffic at -30C (however, some low speed functions can start -40C)

All Cisco optics are thoroughly tested and qualified against the most rigorous requirements in the pluggable optics industry. Furthermore, Cisco customers enjoy the security of the supply chain, which is managed and constantly vetted for capacity and quality to ensure short lead times. Cisco also offers a 5-year warranty on optics. And the same service options and teams that support all of Cisco’s hardware products support optics as well. This includes Cisco’s 24x7 Technical Assistance Center and worldwide distribution sites for same-day replacements.

If a temperature-hardened switch or router is deployed with C-Temp rated optics, then the network deployment is no longer considered temperature hardened. In this case, the entire deployment is effectively derated to a “commercial temperature,” which is not suitable for outdoor deployments. Historically, customers deploying C-Temp optics in outdoor environments have seen much higher rates of network failure. To prevent intermittent network failures and service disruptions, I-Temp (or E-Temp) optics need to be deployed along with the I-Temp rated switches and routers.

Here are some additional resources related to Cisco switches and routers for converged access and IoT applications.

3.     The Cisco Optics-to-Device Compatibility Matrix is a great tool for determining if a transceiver is supported on a particular Cisco platform and the required software release: https://tmgmatrix.cisco.com/