Prerequisites for SPAN and RSPAN

Restrictions for SPAN and RSPAN

Information About SPAN and RSPAN

You can analyze network traffic passing through ports or VLANs by using Switched Port Analyzer (SPAN) or Remote SPAN (RSPAN) to send a copy of the traffic to another port on the switch or on another switch that has been connected to a network analyzer or other monitoring or security device. SPAN copies (or mirrors) traffic received or sent (or both) on source ports or source VLANs to a destination port for analysis. SPAN does not affect the switching of network traffic on the source ports or VLANs. You must dedicate the destination port for SPAN use. Except for traffic that is required for the SPAN or RSPAN session, destination ports do not receive or forward traffic.

You can use the SPAN or RSPAN destination port to inject traffic from a network security device. For example, if you connect a Cisco Intrusion Detection System (IDS) sensor appliance to a destination port, the IDS device can send TCP reset packets to close down the TCP session of a suspected attacker. 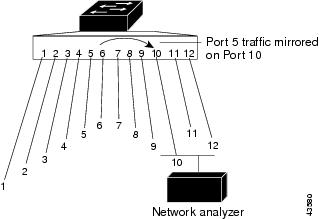 RSPAN supports source ports, source VLANs, and destination ports on different switches, enabling remote monitoring of multiple switches across your network. Figure 30-2 shows source ports on Switch A and Switch B. The traffic for each RSPAN session is carried over a user-specified RSPAN VLAN that is dedicated for that RSPAN session in all participating switches. The RSPAN traffic from the source ports or VLANs is copied into the RSPAN VLAN and forwarded over trunk ports carrying the RSPAN VLAN to a destination session monitoring the RSPAN VLAN. Each RSPAN source switch must have either ports or VLANs as RSPAN sources. The destination is always a physical port, as shown on Switch C in the figure. 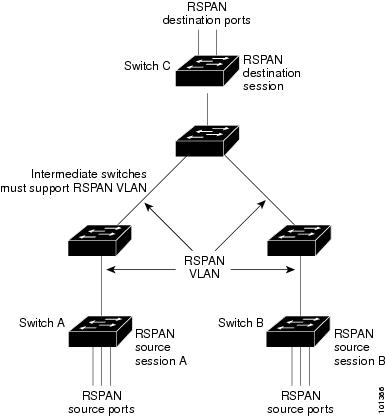 SPAN sessions (local or remote) allow you to monitor traffic on one or more ports, or one or more VLANs, and send the monitored traffic to one or more destination ports.

An RSPAN destination session takes all packets received on the RSPAN VLAN, strips off the VLAN tagging, and presents them on the destination port. Its purpose is to present a copy of all RSPAN VLAN packets (except Layer 2 control packets) to the user for analysis.

Traffic monitoring in a SPAN session has these restrictions:

Packets that are modified because of routing or quality of service (QoS)—for example, modified Differentiated Services Code Point (DSCP)—are copied before modification.

Features that can cause a packet to be dropped during receive processing have no effect on ingress SPAN; the destination port receives a copy of the packet even if the actual incoming packet is dropped. These features include IP standard and extended input access control lists (ACLs), ingress QoS policing, VLAN ACLs, and egress QoS policing.

Packets that are modified because of routing—for example, with modified time-to-live (TTL), MAC-address, or QoS values—are duplicated (with the modifications) at the destination port.

Features that can cause a packet to be dropped during transmit processing also affect the duplicated copy for SPAN. These features include IP standard and extended output ACLs and egress QoS policing.

Therefore, a local SPAN session with encapsulation replicate enabled can have a mixture of untagged and IEEE 802.1Q tagged packets appear on the destination port.

In some SPAN configurations, multiple copies of the same source packet are sent to the SPAN destination port. For example, a bidirectional (both Rx and Tx) SPAN session is configured for the Rx monitor on port A and Tx monitor on port B. If a packet enters the switch through port A and is switched to port B, both incoming and outgoing packets are sent to the destination port. Both packets are the same (unless a Layer-3 rewrite occurs, in which case the packets are different because of the packet modification).

A source port (also called a monitored port) is a switched or routed port that you monitor for network traffic analysis. In a local SPAN session or RSPAN source session, you can monitor source ports or VLANs for traffic in one or both directions. The switch supports any number of source ports (up to the maximum number of available ports on the switch) and any number of source VLANs (up to the maximum number of VLANs supported). However, the switch supports a maximum of two sessions (local or RSPAN) with source ports or VLANs, and you cannot mix ports and VLANs in a single session.

A source port has these characteristics:

VLAN-based SPAN (VSPAN) is the monitoring of the network traffic in one or more VLANs. The SPAN or RSPAN source interface in VSPAN is a VLAN ID, and traffic is monitored on all the ports for that VLAN.

When you monitor a trunk port as a source port, by default, all VLANs active on the trunk are monitored. You can limit SPAN traffic monitoring on trunk source ports to specific VLANs by using VLAN filtering.

Each local SPAN session or RSPAN destination session must have a destination port (also called a monitoring port) that receives a copy of traffic from the source ports or VLANs and sends the SPAN packets to the user, usually a network analyzer.

A destination port has these characteristics:

The RSPAN VLAN carries SPAN traffic between RSPAN source and destination sessions. It has these special characteristics:

For VLANs 1 to 1005 that are visible to VLAN Trunking Protocol (VTP), the VLAN ID and its associated RSPAN characteristic are propagated by VTP. If you assign an RSPAN VLAN ID in the extended VLAN range (1006 to 4096), you must manually configure all intermediate switches.

SPAN and RSPAN Interaction with Other Features

The same RSPAN VLAN is used for an RSPAN session in all the switches.

How to Configure SPAN and RSPAN

Configuring a VLAN as an RSPAN VLAN

Monitoring and Maintaining SPAN and RSPAN

Configuration Examples for SPAN and RSPAN

This example shows how to remove port 1 as a SPAN source for SPAN session 1:

This example shows how to disable received traffic monitoring on port 1, which was configured for bidirectional monitoring:

The monitoring of traffic received on port 1 is disabled, but traffic sent from this port continues to be monitored.

This example shows how to remove any existing configuration on SPAN session 2, configure SPAN session 2 to monitor received traffic on Gigabit Ethernet source port 1, and send it to destination Gigabit Ethernet port 2 with the same egress encapsulation type as the source port, and to enable ingress forwarding with IEEE 802.1Q encapsulation and VLAN 6 as the default ingress VLAN.

To monitor all VLANs on the trunk port, use the no monitor session session_number filter global configuration command.

This example shows how to create RSPAN VLAN 901:

Configuring a VLAN for a SPAN Session: Example

This example shows how to configure VLAN 901 as the source remote VLAN and port 1 as the destination interface:

This example shows how to remove any existing RSPAN configuration for session 1, configure RSPAN session 1 to monitor multiple source interfaces, and configure the destination as RSPAN VLAN 901:

This example shows how to configure VLAN 901 as the source remote VLAN in RSPAN session 2, to configure Gigabit Ethernet source port 2 as the destination interface, and to enable forwarding of incoming traffic on the interface with VLAN 6 as the default receiving VLAN:

This example shows how to remove any existing configuration on RSPAN session 2, configure RSPAN session 2 to monitor traffic received on trunk port 2, and send traffic for only VLANs 1 through 5 and 9 to destination RSPAN VLAN 902: