RMON is an Internet Engineering Task Force (IETF) standard monitoring specification that allows various network agents and console systems to exchange network monitoring data. You can use the RMON feature with the Simple Network Management Protocol (SNMP) agent in the switch to monitor all the traffic flowing among switches on all connected LAN segments as shown in Figure 34-1. 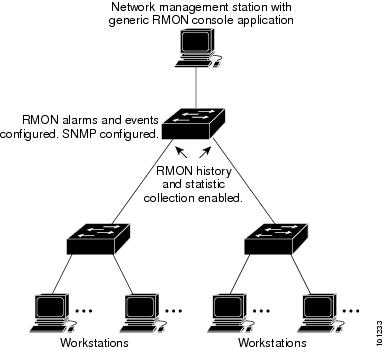 The switch supports these RMON groups (defined in RFC 1757):

Because switches supported by this software release use hardware counters for RMON data processing, the monitoring is more efficient, and little processing power is required.

64-bit counters are not supported for RMON alarms.

RMON is disabled by default; no alarms or events are configured.

How to Configure RMON

You can configure your switch for RMON by using the command-line interface (CLI) or an SNMP-compatible network management station.

You must first configure RMON alarms and events to display collection information.

The following example shows how to configure an RMON alarm number:

This example shows how to collect RMON statistics for the owner root :