Information About the ASA IPS module

The ASA IPS module runs advanced IPS software that provides proactive, full-featured intrusion prevention services to stop malicious traffic, including worms and network viruses, before they can affect your network. This section includes the following topics:

How the ASA IPS module Works with the ASA

Traffic is sent to the ASA IPS module.

The ASA IPS module applies its security policy to the traffic, and takes appropriate actions.

Valid traffic is sent back to the ASA; the ASA IPS module might block some traffic according to its security policy, and that traffic is not passed on.

You can send traffic to the ASA IPS module using one of the following modes: 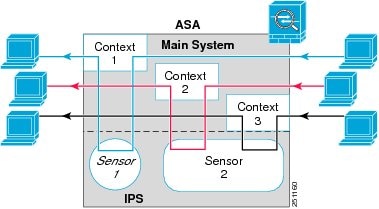 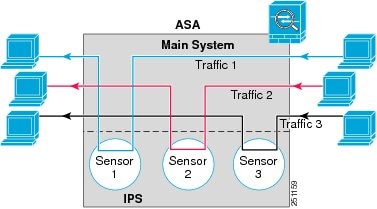 You can manage the IPS application using the following methods:

See the following information about the management interface:

ASA 5510, ASA 5520, ASA 5540, ASA 5580, ASA 5585-X—The IPS management interface is a separate external Gigabit Ethernet interface. If you cannot use the default address (see the “Default Settings” section), you can change the interface IP address and other network parameters. See the “Configuring Basic IPS Module Network Settings” section. The IPS management IP address can be on the same network as the ASA (connected through a switch), or on a different network (through a router). If you use a different network, be sure to set the IPS gateway as appropriate.

ASA 5512-X, ASA 5515-X, ASA 5525-X, ASA 5545-X, ASA 5555-X—These models run the ASA IPS module as a software module. The IPS management interface shares the Management 0/0 interface with the ASA. Separate MAC addresses and IP addresses are supported for the ASA and ASA IPS module. You must perform configuration of the IPS IP address within the IPS operating system (using the CLI or ASDM). However, physical characteristics (such as enabling the interface) are configured on the ASA. You can change the interface IP address and other network parameters. You should set the default gateway to be an upstream router instead of the ASA management interface. Because the ASA management interface does not allow through-traffic, traffic destined to another network is not allowed through the ASA. See the “Configuring Basic IPS Module Network Settings” section.

ASA 5505—You can use an ASA VLAN to allow access to an internal management IP address over the backplane. See the “(ASA 5505) Configuring Basic Network Settings” section to change the network settings.

The ASA IPS module requires a separate Cisco Services for IPS license in order to support signature updates. All other updates are available without a license.

You cannot change the software type installed on the module; if you purchase an ASA IPS module, you cannot later install other software on it.

Table 62-1 lists the default settings for the ASA IPS module.

This section describes how to configure the ASA IPS module and includes the following topics:

Depending on your ASA model:

On the module, configure the inspection and protection policy, which determines how to inspect traffic and what to do when an intrusion is detected. See the “Configuring the Security Policy on the ASA IPS module” section.

(ASA 5510 and higher, optional) On the ASA in multiple context mode, specify which IPS virtual sensors are available for each context (if you configured virtual sensors). See the “Assigning Virtual Sensors to a Security Context (ASA 5510 and Higher)” section.

The ASA 5505 does not have a dedicated management interface. You must use an ASA VLAN to access an internal management IP address over the backplane. For a factory default configuration, connect the management PC to one of the following ports: Ethernet 0/1 through 0/7, which are assigned to VLAN 1.

These models run the ASA IPS module as a software module, and the IPS management interface shares the Management 0/0 interface with the ASA. 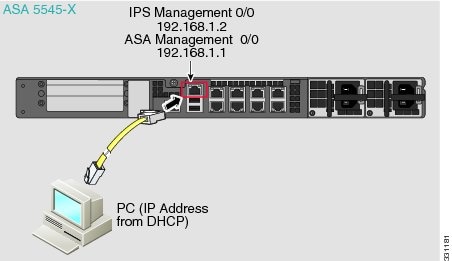 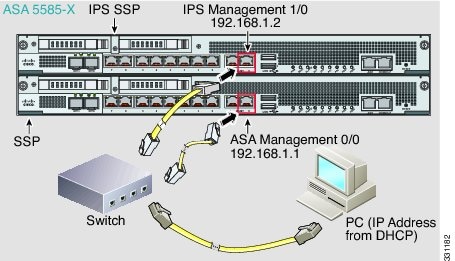 Sessioning to the Module from the ASA

To access the IPS module CLI from the ASA, you can session from the ASA. For software modules, you can either session to the module (using Telnet) or create a virtual console session. A console session might be useful if the control plane is down and you cannot establish a Telnet session.

Session to the module from the ASA and configure basic settings using the setup command.

An ASA IPS module on the ASA 5505 does not have any external interfaces. You can configure a VLAN to allow access to an internal IPS management IP address over the backplane. By default, VLAN 1 is enabled for IPS management. You can only assign one VLAN as the management VLAN. This section describes how to change the management VLAN and IP address if you do not want to use the default. It also describes how to change the allowed hosts and gateway. See the “Default Settings” section for more information about defaults.

Perform this configuration on the ASA 5505, not on the ASA IPS module.

When you change the IPS VLAN and management address from the default, be sure to also configure the matching ASA VLAN and switch port(s) according to the procedures listed in Chapter13, “Starting Interface Configuration (ASA 5505)” You must define and configure the VLAN for the ASA so the IPS management interface is accessible on the network.

The following example configures VLAN 20 as the IPS management VLAN. This VLAN is restricted to management traffic only. Only the host at 10.1.1.30 can access the IPS management IP address. VLAN 20 is assigned to switch port Ethernet 0/0. When you connect to ASDM on ASA interface 10.1.1.1, ASDM then accesses the IPS on 10.1.1.2.

Your ASA typically ships with IPS module software present on Disk0. If the module is not running, however, you need to install the module.

If you need to copy a new image to disk0, download the image from Cisco.com to a TFTP server, and then enter:

For other server types, see the “Downloading a File to a Specific Location” section.

To identify the IPS module software location in disk0, enter the following command:

For example, using the filename in the example in Step 1, enter:

To install and load the IPS module software, enter the following command:

To check the progress of the image transfer and module restart process, enter the following command:

Configuring the Security Policy on the ASA IPS module

This section describes how to configure the ASA IPS module application.

Access the ASA IPS module CLI using one of the following methods:

Configure the IPS security policy according to the IPS documentation.

To access all documents related to IPS, go to: http://www.cisco.com/en/US/products/hw/vpndevc/ps4077/products_documentation_roadmaps_list.html

(ASA 5510 and higher) If you configure virtual sensors, you identify one of the sensors as the default. If the ASA does not specify a virtual sensor name in its configuration, the default sensor is used.

When you are done configuring the ASA IPS module, exit the IPS software by entering the following command:

If you sessioned to the ASA IPS module from the ASA, you return to the ASA prompt.

Assigning Virtual Sensors to a Security Context (ASA 5510 and Higher)

If the ASA is in multiple context mode, then you can assign one or more IPS virtual sensors to each context. Then, when you configure the context to send traffic to the ASA IPS module, you can specify a sensor that is assigned to the context; you cannot specify a sensor that you did not assign to the context. If you do not assign any sensors to a context, then the default sensor configured on the ASA IPS module is used. You can assign the same sensor to multiple contexts.

You do not need to be in multiple context mode to use virtual sensors; you can be in single mode and use different sensors for different traffic flows.

Change to each context to configure the IPS security policy as described in “Diverting Traffic to the ASA IPS module” section.

This section identifies traffic to divert from the ASA to the ASA IPS module.

In multiple context mode, perform these steps in each context execution space. To change to a context, enter the changeto context context_name command.

To check the status of a module, enter one of the following commands:

The following is sample output from the show module details command, which provides additional information for an ASA with an SSC installed:

This section includes procedures that help you recover or troubleshoot the module and includes the following topics:

Installing an Image on the Module

If the module suffers a failure, and the module application image cannot run, you can reinstall a new image on the module from a TFTP server (for a physical module), or from the local disk (software module).

Do not use the upgrade command within the module software to install the image.

This process can take approximately 15 minutes to complete, depending on your network and the size of the image.

Before you download the IPS software to disk0, make sure at least 50% of the flash memory is free. When you install IPS, IPS reserves 50% of the internal flash memory for its file system.

To uninstall a software module image and associated configuration, perform the following steps.

You can reset the module password to the default. The default password is cisco. After resetting the password, you should change it to a unique value using the module application.

Resetting the module password causes the module to reboot. Services are not available while the module is rebooting.

To reset the module password to the default of cisco, perform the following steps.

Reloading or Resetting the Module

To reload or reset the module, enter one of the following commands at the ASA CLI.

Shutting Down the Module

If you restart the ASA, the module is not automatically restarted. To shut down the module, perform the following steps at the ASA CLI.

Table 62-2 lists each feature change and the platform release in which it was implemented.