To enable ICMP inspection to the default global policy, perform the following steps:

Draw a diagram of your single-mode ASA or security context that shows the interface names, security levels, and IP addresses.

Although this procedure uses IP addresses, the ping command also supports DNS names and names that are assigned to a local IP address with the name command.

The diagram should also include any directly connected routers and a host on the other side of the router from which you will ping the ASA. You will use this information in this procedure and in the procedure in the “Passing Traffic Through the ASA” section. (See Figure 82-1.) 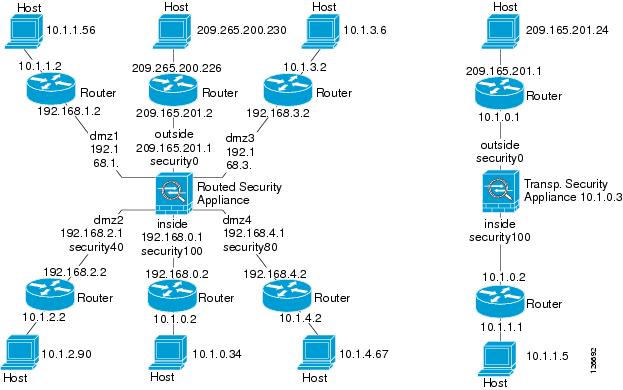 Ping each ASA interface from the directly connected routers. For transparent mode, ping the management IP address. This test ensures that the ASA interfaces are active and that the interface configuration is correct.

A ping might fail if the ASA interface is not active, the interface configuration is incorrect, or if a switch between the ASA and a router is down (see Figure 82-2). In this case, no debug messages or syslog messages appear, because the packet never reaches the ASA.

If the ping reply does not return to the router, then a switch loop or redundant IP addresses may exist (see Figure 82-3).

A ping might fail if the ASA does not have a return route to the host through the intermediate router (see Figure 82-4). In this case, the debugging messages show that the ping was successful, but syslog message 110001 appears, indicating a routing failure.

After you successfully ping the ASA interfaces, make sure that traffic can pass successfully through the ASA. For routed mode, this test shows that NAT is operating correctly, if configured. For transparent mode, which does not use NAT, this test confirms that the ASA is operating correctly. If the ping fails in transparent mode, contact the Cisco TAC.

To ping between hosts on different interfaces, perform the following steps:

To troubleshoot TCP packet loss, see the “Customizing the TCP Normalizer with a TCP Map” section for more information.

To reload the ASA, enter the following command:

This section describes how to recover passwords if you have forgotten them or you are locked out because of AAA settings, and how to disable password recovery for extra security. This section includes the following topics:

Recovering Passwords for the ASA

To recover passwords for the ASA, perform the following steps:

Connect to the ASA console port according to the instructions in “Accessing the Appliance Command-Line Interface” section.

Power off the ASA, and then power it on.

After startup, press the Escape key when you are prompted to enter ROMMON mode.

To update the configuration register value, enter the following command:

To set the ASA to ignore the startup configuration, enter the following command:

The ASA displays the current configuration register value, and asks whether you want to change it:

Record the current configuration register value, so you can restore it later.

At the prompt, enter Y to change the value.

The ASA prompts you for new values.

Accept the default values for all settings, except for the "disable system configuration?" value.

At the prompt, enter Y.

Reload the ASA by entering the following command:

Access the privileged EXEC mode by entering the following command:

Load the startup configuration by entering the following command:

Access the global configuration mode by entering the following command:

Change the passwords, as required, in the default configuration by entering the following commands:

Load the default configuration by entering the following command:

Save the new passwords to the startup configuration by entering the following command:

On the ASA, the no service password-recovery command prevents you from entering ROMMON mode with the configuration intact. When you enter ROMMON mode, the ASA prompts you to erase all Flash file systems. You cannot enter ROMMON mode without first performing this erasure. If you choose not to erase the Flash file system, the ASA reloads. Because password recovery depends on using ROMMON mode and maintaining the existing configuration, this erasure prevents you from recovering a password. However, disabling password recovery prevents unauthorized users from viewing the configuration or inserting different passwords. In this case, to restore the system to an operating state, load a new image and a backup configuration file, if available.

To reset the password to the default of “cisco” on the SSM hardware module, enter the following command:

Make sure that the SSM hardware module is in the Up state and supports password reset.

Using the ROM Monitor to Load a Software Image

To load a software image to an ASA from the ROM monitor mode using TFTP, perform the following steps:

Connect to the ASA console port according to the instructions in the “Accessing the Appliance Command-Line Interface” section.

Power off the ASA, then power it on.

During startup, press the Escape key when you are prompted to enter ROMMON mode.

In ROMMOM mode, define the interface settings to the ASA, including the IP address, TFTP server address, gateway address, software image file, and port, as follows:

Be sure that the connection to the network already exists.

To validate your settings, enter the set command.

Ping the TFTP server by entering the ping server command.

Load the software image by entering the tftp command.

After the software image is successfully loaded, the ASA automatically exits ROMMON mode.

To verify that the correct software image has been loaded into the ASA, check the version by entering the following command:

To erase the flash file system, perform the following steps:

Connect to the ASA console port according to the instructions in “Accessing the Appliance Command-Line Interface” section.

Power off the ASA, then power it on.

During startup, press the Escape key when you are prompted to enter ROMMON mode.

Enter the erase command, which overwrites all files and erases the file system, including hidden system files.

The ASA provides other troubleshooting tools that you can use. This section includes the following topics:

Because debugging output is assigned high priority in the CPU process, it can render the system unusable. For this reason, use debug commands only to troubleshoot specific problems or during troubleshooting sessions with Cisco TAC. Moreover, it is best to use debug commands during periods of less network traffic and fewer users. Debugging during these periods decreases the likelihood that increased debug command processing overhead will affect system use. To enable debugging messages, see the debug commands in the command reference.

Capturing packets is sometimes useful when troubleshooting connectivity problems or monitoring suspicious activity. We recommend that you contact the Cisco TAC if you want to use the packet capture feature. See the capture command in the command reference.

If the ASA crashes, you can view the crash dump information. We recommend contacting Cisco TAC if you want to interpret the crash dump. See the show crashdump command in the command reference.

A coredump is a snapshot of the running program when the program has terminated abnormally, or crashed. Coredumps are used to diagnose or debug errors and save a crash for future off-site analysis. Cisco TAC may request that users enable the coredump feature to troubleshoot application or system crashes on the ASA. See the coredump command in the command reference.

You can monitor the processes that run on the CPU. You can obtain information about the percentage of CPU that is used by a certain process. CPU usage statistics are sorted in descending order to display the highest consumer at the top. Also included is information about the load on the CPU per process, at 5 seconds, 1 minute, and 5 minutes before the log time. This information is updated automatically every 5 seconds to provide real-time statistics.You can use the show process cpu-usage sorted command to find a breakdown of the process-related load-to-CPU that is consumed by any configured contexts.

This section describes common problems with the ASA, and how you might resolve them.

Symptom The context configuration was not saved, and was lost when you reloaded.

Possible Cause You did not save each context within the context execution space. If you are configuring contexts at the command line, you did not save the current context before you changed to the next context.

Recommended Action Save each context within the context execution space using the copy start run command. Load the startup configuration as your active configuration. Then change the password and then enter the copy run start command. You cannot save contexts from the system execution space.

Symptom You cannot make a Telnet or SSH connection to the ASA interface.

Possible Cause You did not enable Telnet or SSH to the ASA.

Recommended Action Enable Telnet or SSH to the ASA according to the instructions in the “Configuring ASA Access for ASDM, Telnet, or SSH” section.

Possible Cause You disabled ICMP to the ASA.

Recommended Action Enable ICMP to the ASA for your IP address using the icmp command.

Possible Cause You did not enable the ICMP inspection engine or apply access lists on both the ingress and egress interfaces.

Symptom Traffic does not pass between two interfaces on the same security level.

Possible Cause You did not enable the feature that allows traffic to pass between interfaces at the same security level.

Recommended Action Enable this feature according to the instructions in the “Allowing Same Security Level Communication” section.

Symptom IPsec tunnels do not duplicate during a failover to the standby device.

Recommended Action Set the switch port that the ASA is plugged into to 1000.