Multicast overlay routing does not support the following features:

On the service side, the Cisco IOS XE SD-WAN software supports native multicast. A router appears as a native PIM router and establishes PIM neighborship with other PIM routers at a local site. A Cisco IOS XE SD-WAN router supports a directly connected local source, referred as a first hop router (FHR). Receivers residing downstream of a router can join multicast streams by exchanging IGMP membership reports directly with the device, and no other routers are required. Additionally, the Cisco SD-WAN router can act as the PIM-RP for the local site.

Dynamic RP-group mappings are propagated in the Cisco IOS XE SD-WAN solution using Auto-RP. ACLs can be used to control or map certain group ranges to a specific RP. With this information, each PIM router has the ability to forward joins to the correct RP for the group that a downstream IGMP client is attempting to join. Auto-RP updates are propagated to downstream PIM routers if such routers are present in the local site and across the overlay to the remote sites that belong to the same VPN. While using Auto-RP, it is recommended that a replicator node is configured as the Auto-RP mapping agent.

For efficient use of WAN bandwidth, strategic Cisco IOS XE SD-WAN routers can be deployed and configured as replicators throughout the overlay network. Replicators mitigate the requirement for a Cisco SD-WAN router with local sources or the PIM-RP to replicate a multicast stream once for each receiver. As discussed above, replicators advertise themselves, using OMP multicast-autodiscover routes, to the Cisco vSmart Controllers in the overlay network. The controllers then forward the replicator location information to the PIM-enabled Cisco IOS XE SD-WAN routers that are in the same VPN as the replicator.

A replicator Cisco IOS XE SD-WAN router receives streams from multicast sources, replicates them, and forwards them to other Cisco SD-WAN routers with multicast receivers in the same VPN. The details of the replication process are discussed below, in the section Multicast Traffic Flow through the Overlay Network. A replicator is typically a Cisco IOS XE SD-WAN router located at a colo-site or another site with a higher-speed connection to the WAN transport network.

For any Cisco IOS XE SD-WAN routers to be able to participate in the multicast overlay network, you must configure PIM on those routers.

When a Cisco IOS XE SD-WAN router is used as a replicator, use the following steps to configure multicast:

When you first open a feature template, for each parameter that has a default value, the scope is set to Default (indicated by a check mark), and the default setting or value is shown. To change the default or to enter a value, click the scope drop-down list to the left of the parameter field and select the value.

To configure multicast, perform the following:

Configure an ACL for Multicast Using a CLI Add-On Template

You can configure an ACL to limit RP and Bootstrap Router (BSR) selection using a CLI add-on template. An ACL allows you to filter multicast traffic streams using the group and sometimes source IPv4 or IPv6 addresses.

Once you create the CLI add-on template, you attach it to the device.

(Optional) You can configure the same standard and extended ACL values in Cisco vManage, which generates the following example configurations:

Use the PIM template for all Cisco IOS XE SD-WAN devices.

When you first open a feature template, for each parameter that has a default value, the scope is set to Default (indicated by a check mark), and the default setting or value is shown. To change the default or to enter a value, click the scope drop-down list to the left of the parameter field and select the value.

To configure PIM, click Basic Configuration and configure the following parameters. Parameters marked with an asterisk are required to configure PIM.

If the router is just a multicast replicator and is not part of a local network that contains either multicast sources or receivers, you do not need to configure any PIM interfaces. The replicator learns the locations of multicast sources and receivers from the OMP messages it exchanges with the Cisco vSmart Controller. These control plane messages are exchanged in the transport VPN (VPN 0). Similarly, other Cisco IOS XE SD-WAN devices discover replicators dynamically, through OMP messages from the Cisco vSmart Controller.

To edit an interface, click the pencil icon to the right of the entry.

To delete an interface, click the trash icon to the right of the entry.

PIM uses a BSR to discover and announce RP-set information for each group prefix to all the routers in a PIM domain. This is the same function performed by Auto-RP, but a BSR is part of the PIM version 2 specification.

To avoid a single point of failure, you can configure several candidate BSRs in a PIM domain. A BSR is selected among the candidate BSRs automatically. The BSRs use bootstrap messages to discover which BSR has the highest priority. This router then announces to all PIM routers in the PIM domain that it is the BSR. Any router in the network can be a BSR candidate.

An RP acts as the meeting place for sources and receivers of multicast data. In a PIM-SM network, sources must send their traffic to the RP. This traffic is then forwarded to receivers down a shared distribution tree. By default, when the first hop router of the receiver learns about the source, it sends a join message directly to the source, creating a source-based distribution tree from the source to the receiver. This source tree does not include a RP unless the RP is located within the shortest path between the source and the receiver.

Sample Topology for RP Selection by a PIM BSR

The following is a sample topology for RP selection by a PIM BSR on Cisco IOS XE SD-WAN devices. 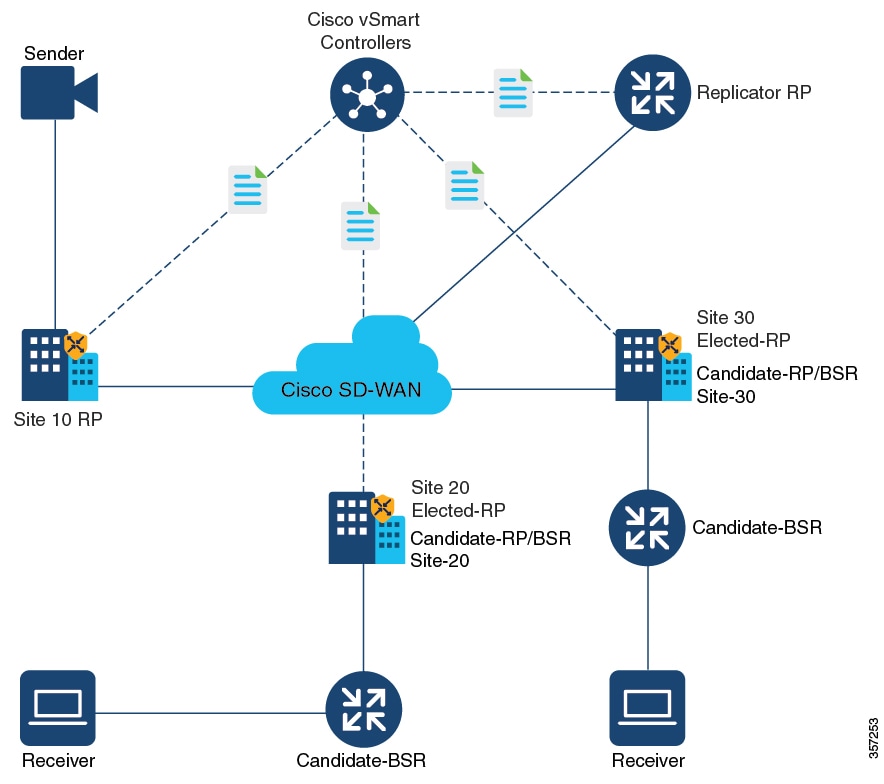 Prerequisites for Configuring a BSR Candidate

For a PIM BSR to elect the RP, configure the following in Cisco vManage:

In Cisco vManage, configure SPT Only mode to ensure that the RPs can communicate with each other using the shortest-path tree.

Configure a PIM Feature Template and Add an Interface

Configure a PIM feature template and add an interface for an RP and the BSR candidate.

Configure the same Cisco IOS XE SD-WAN device as the candidate RP for all multicast groups or selective groups.

When you first open a feature template, for each parameter that has a default value, the scope is set to Default (indicated by a check mark), and the default setting or value is shown. To change the default or to enter a value, click the scope drop-down to the left of the parameter field and select the value.

For a Cisco IOS XE SD-WAN router located at a site that contains one or more multicast sources, enable PIM on the service-side interface or interfaces. These are the interfaces that connect to the service-side network. To enable PIM or IGMP per VPN, you must configure PIM or IGMP and its interfaces for all VPNs support multicast services. PIM configuration is not required in VPN 0 (the transport VPN facing the overlay network) or in VPN 512 (the management VPN).