Chapter: Setting Up a Job Dependency

Setting Up a Job Dependency

Enteprise Scheduler has the flexibility to encompass the different scheduling needs encountered in a business environment. You use job dependencies to prevent a job from running until the preceding job completes or enters a predefined status. You can also set jobs to run only when manually released.

In this chapter, we are going to define (add) a job called Inv21 . We will assign a calendar to this job, but we will also make it Require operator release . Even if according to its calendar, the job is due to run, it does not run until it is released from Waiting on Operator status. We will define a second job, Inv22 , which depends on Inv21 . Inv22 does not run until Inv21 completes normally. Finally, we release Inv21 , and both jobs end with a Completed Normally status.

Figure 5-1 Interdependence of Inv21, Inv22, and the Operator 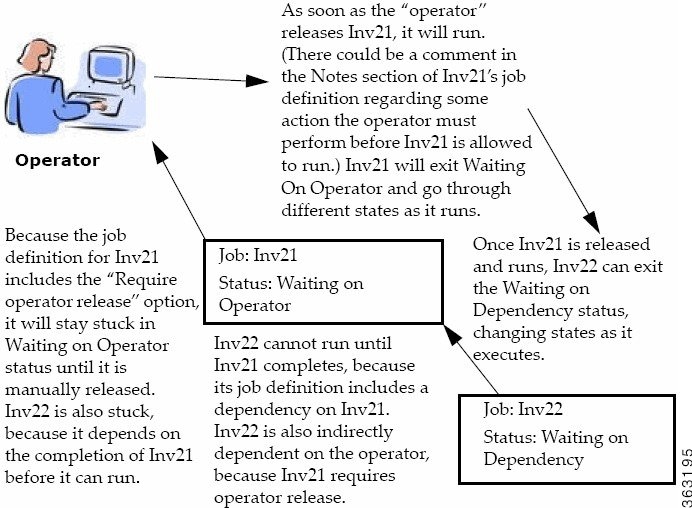 This chapter describes how to:

Note To complete the exercises in this tutorial, you need to:

Defining a Job for Operator Release

You can define a job requiring an operator to release it manually before running, after all its other dependencies are satisfied. Before the job is released, it enters the Waiting on Operator status. The job definition can include instructions for the operator.

Requiring an operator release is a good technique when testing a job or a set of sequential jobs for the first time. This is also good for jobs requiring operators to verify an event, or perform a related operation external to Enteprise Scheduler.

From the Navigator pane, select Definitions>Jobs to display the Jobs pane.

Right-click in the Jobs pane of the console and select Add Job from the context menu, or click the Add Job button on the Enterprise Scheduler toolbar.

In the Job Name field, enter the name Inv21 .

In the Command field, enter the full path to Inv21.bat .

Note Although the command executable has the same name as the job in this case, this is not required. The Job Name is any logical name that is meaningful to you. However, the command name refers to the physical file and must match the actual command.

In the Calendar Name list and select the work day calendar.

Click OK in the Effective Date dialog to submit the job into today’s schedule.

From the Navigator pane, select Operations>Job Activity to display the Job Activity pane.

We will leave this job for now, and release it to the Production Schedule later after creating a second job with a dependency on Inv21 completing normally.

Adding a Job with a Dependency

We will now create the Inv22 job definition with a dependency on the Inv21 job already in the production schedule.

To create the Inv22 job definition with a dependency on the Inv21 job:

From the Navigator pane, select Definitions>Jobs to display the Jobs pane.

Right-click in the Jobs pane of the console and select Add Job from the context menu, or click the Add Job button on the Scheduler toolbar.

In the Job Name field, type the name Inv22 .

In the Command field, enter the full path to Inv22.bat .

In the Calendar Name list, select the work day calendar.

Display the Dependencies tab, by clicking its tab on the Job Definition dialog.

Accept the defaults and click OK . The defaults are preset to satisfy the dependency when Inv21 completes normally.

Now Inv21 shows as a dependency for Inv22 . The Inv21 dependency is part of the job definition of Inv22 .

Click OK in the Job Definition dialog to close it.

The Inv22 job is added to the production schedule.

Both jobs are now scheduled and ready to run. Use the Job Activity pane to monitor them.

From the Navigator pane, select Operations>Job Activity to display your scheduled jobs. 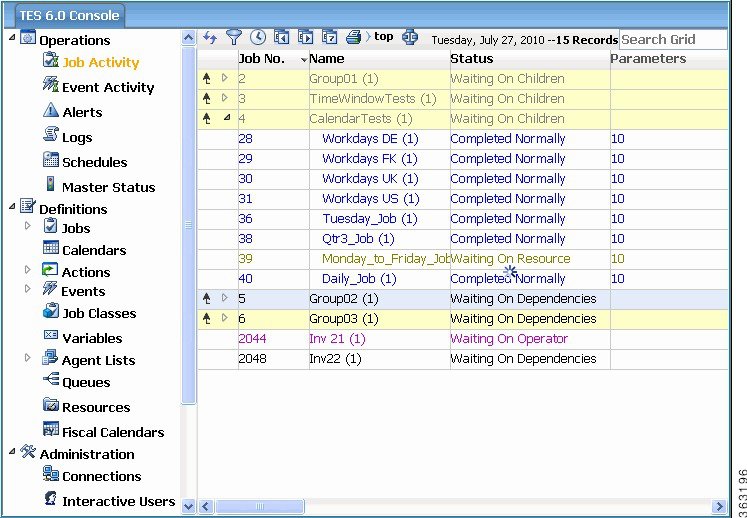 Notice that both jobs are in waiting mode. Inv21 needs manual intervention before it can run (Waiting On Operator) and Inv22 is waiting for Inv21 to complete normally (Waiting On Dependencies).

Double-click the Inv22 job in the Job Activity pane to display its Job Detail dialog.

Click the Dependencies tab. The dependency appears in the Predecessors field.

This shows that Inv22 is waiting for Inv21 to complete normally. Currently Inv21 is in Waiting on Operator status. Inv22 cannot run until Inv21 goes to Completed Normally status.

To release the jobs:

Click the Inv21 job in the Job Activity pane.

Right-click the job to display the context menu.

Select the Job Control option and then choose the Release/Resume option to release the job. 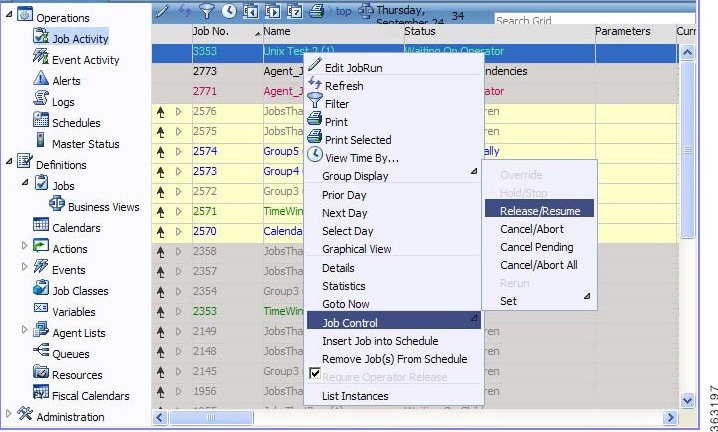 Now Inv21 is free to run. Once complete, Inv21 enters a Completed Normally status. The color of Inv21 changes to green and then to blue (if using the default status colors), and then Inv22 runs. Inv22 displays similar status and color changes.

Congratulations! In this chapter, you have defined jobs requiring manual release and a job dependency. You have scheduled and monitored your jobs through the various states until completion.