This document assumes that the reader is already familiar with the configuration of VXLAN EVPN data center fabric. The VXLAN EVPN fabric can be configured either manually or using Cisco Data Center Network Manager (DCNM). This document focuses entirely on providing external Layer 3 connectivity to the fabric with the assumption that the data center fabric is already configured and working on all devices, including the border leaf and spine nodes.

Every fabric needs external connectivity to the campus or data center core network. Before the introduction of the Cisco Border Provider Edge feature for VXLAN EVPN running on Cisco Nexus® 9000 Series Switches, external Layer 3 connectivity required a VRF-lite two-device-based approach. Each fabric VRF instance was extended with a subinterface per instance along with Interior Gateway Protocol (IGP) or External Border Gateway Protocol (eBGP) peering between the border leaf and border spine and the edge router. In many two-device deployments, the edge router acts as an MPLS provider edge node. In deployments with a very large number of extended VRF instances, the number of eBGP sessions or IGP neighbors can cause scalability problems and configuration complexity.

To address the potential drawbacks of two-device solutions, Cisco has extended the external Layer 3 connectivity solution portfolio with a new single-device solution. This solution, the VXLAN EVPN BorderPE node, merges the border leaf and border spine and the MPLS provider edge router into a single device to provide Layer 3 external connectivity to data center fabric. Figures 1 and 2 compare the new single-device VXLAN EVPN BorderPE solution to the two-device solution in an MPLS campus or core scenario. We are using MPLS interchangibly for MPLS with Label Distribution Protocol (LDP) or MPLS with Segment Routing. Given similar Border PE function is present with Segment Routing for IPv6 (SRv6), the same document also encompasses these deployment scenarios.

This section lists the requirements for a VXLAN EVPN BorderPE deployment.

This document does not cover the hardware and software requirements for the VXLAN EVPN fabric and the MPLS network. The following link provides access to the Cisco website, where you can find more information about fabric deployment: https://www.cisco.com/c/en/us/solutions/data-center-virtualization/index.html.

See the publically available documents on the Cisco website for additional information about MPLS network deployment.

This section provides physical and logical overviews of a BorderPE deployment and an overview of BorderPE forwarding.

Figure 3 shows the network topology used in this document to describe the BorderPE integration.

The programmable data center fabrics in Figure 3 are assigned to private autonomous system (AS) numbers 65500 and 65505 respectively and use a Clos architecture consisting of spine and leaf nodes. The configuration of these nodes is performed using either the command-line interface (CLI) or Data Center Network Manager power-on autoprovisioning (POAP) templates.

Each spine node in the fabric is deployed as an MP-BGP route reflector (RR) for the EVPN address family. The leaf nodes and BorderPE nodes peer with the fabric Multiprotocol BGP (MP-BGP) route reflectors. Within the data center fabric, an MP-BGP EVPN control plane provides host reachability information. This BGP EVPN control plane in the VXLAN EVPN fabric helps ensure distribution of routes between VXLAN tunnel endpoints (VTEPs) and the BorderPE nodes within the fabric. The leaf switches will forward the attached host IP and MAC addresses using the EVPN route type 2 option (for this route type, BGP has both the IP and MAC address information), including Layer 2 and Layer 3 VXLAN network identifiers (VNIs).

The two BorderPE nodes on the two fabrics are assigned to private autonomous systems 65500 and 65505 in the fabric respectively and provide redundant Layer 3 connectivity between the programmable fabric and the Layer 3 VPN MPLS network. The BorderPE nodes are configured with all the local VRF instances in the fabric, and on the basis of the import route-target (RT) values configured on the BorderPE, the switch will import the /32 routes into local VRF tables.

The merge of the fabric border leaf node and the MPLS provider edge node into a single node requires the rewriting of the BGP route targets and the VPN route distinguisher (RD) attribute. This section briefly discusses these policies for the two forwarding directions. Attributes, such as site of origin and sequence number (used for host mobility), if they are available, are carried from the local fabric to external nodes and back to the fabric, or in the opposite direction, depending on the forwarding direction.

Forwarding from the Fabric to the MPLS Network

Figure 4, Table 2, and the following discussion present the steps used when a packet sourced in the fabric is forwarded to a fabric external destination. 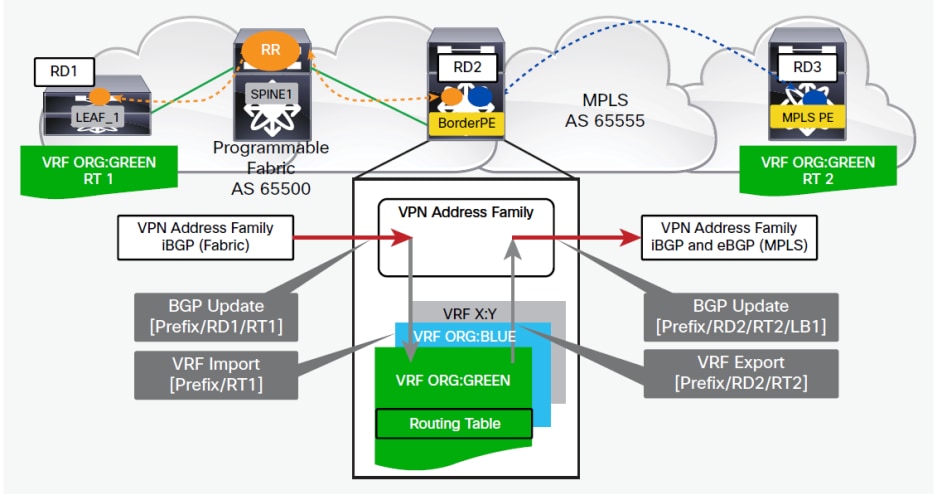 When the BorderPE node receives a route from the fabric (sourced by a leaf node), the following steps are processed:

1.     The EVPN type 2 routes (/32 host IP and MAC routes) are imported into the local VRF instance according to the BGP route-target filtering.

3.     Imported routes are re-exported to the VPN address family, and a local VPNv4/v6 MPLS label is allocated.

4.     Re-exported routes are advertised to eBGP peers with the allocated VPNv4/v6 MPLS label. (An eBGP neighborship exists between the BorderPE and the autonomous system boundary router (ASBR) in the MPLS cloud.)

Forwarding from the MPLS Network to the Fabric

Figure 5, Table 3, and the following discussion present the steps used when a packet sourced outside the fabric is forwarded to a destination internal to the fabric. 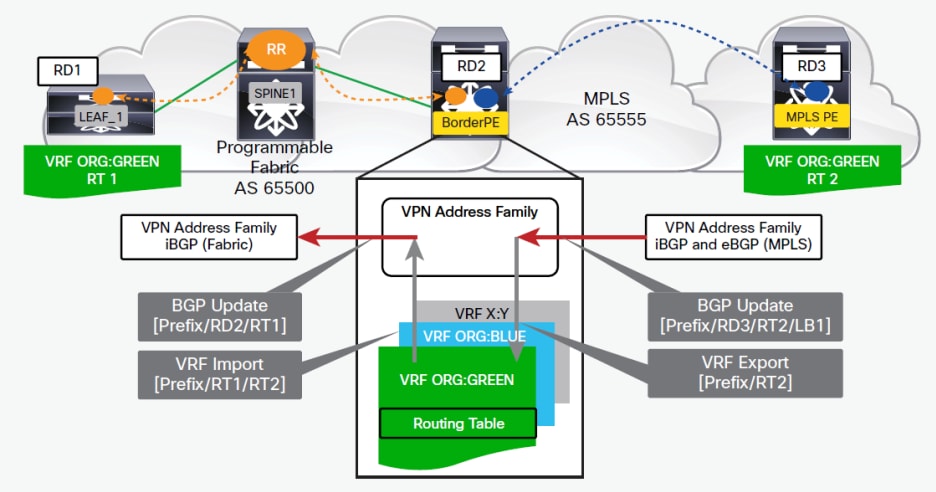 When the BorderPE node receives a route from the external fabric (sourced by an MPLS provider edge node), the following steps are processed:

1.     Routes are imported into the local VRF instance according to the BGP route-target filtering.

2.     Imported routes are installed in the local RIB and FIB with the MPLS label and the next hop from the default VRF instance resolved. The VPN route distinguisher coming from the MPLS side is stripped off.

3.     Imported routes are re-exported into the VPN address family in the fabric. The BorderPE mode switches are configured to re-originate these imported VRF prefixes from the MPLS side toward the EVPN control plane on the fabric side.

4.     Re-exported routes are advertised to fabric BGP peers in AS 65500 along with the fabric-specific encapsulation information such as the VN-segment ID (VNI).

6.     The per-VRF MPLS network-relevant BGP route target is stripped off.

This section summarizes the steps for configuring the BorderPE solution on a Cisco Nexus Switch using manual configuration without an overlay provisioning manager such as Virtual Topology System.

Step 1.         Enable importing and exporting of routes per tenant VRF instance from the VXLAN fabric side to the MPLS side. The following settings should already be configured as part of the fabric configuration (create a VRF instance and associate a VNI with it) on the BorderPE nodes.

Now enable the importing and exporting of the VXLAN fabric side to the MPLS side on the BorderPE node.

Step 3.         Enable importing and exporting of routes per tenant VRF instance from the MPLS side to the VXLAN fabric side.

The BorderPE solution merges the border leaf and border spine and the MPLS provider edge into a single device to provide Layer 3 external connectivity to the data center fabric. The Cisco Nexus 9000 Series platform switches have comprehensive feature sets that can be used to implement the VXLAN-to-MPLS solution discussed in this document.