Use Wireshark to Troubleshoot OTV Solutions

This document demonstrates the use of Wireshark, a well-known freeware packet capture and analysis tool, in troubleshooting Cisco OTV solution.

The information in this document is based on the Nexus 7000 Series Switch platform.

When troubleshooting network issues in VPN environments, one of the techniques involves the capture and analysis of encapsulated packets. However, in Cisco OTV network environments this approach is met with a certain challenge. Commonly used packet analysis tools, like Wireshark, a free and open source packet analyzer, may not correctly interpret the content of OTV-encapsulated traffic. Hence laborious workarounds, such as the extraction of encapsulated data from an OTV packet, are usually required to successfully perform data analysis.

OTV encapsulation increases the overall MTU size of the packet by 42 bytes. This is the result of the operation of the OTV Edge Device that removes the CRC and the 802.1Q fields from the original Layer 2 frame and adds an OTV Shim (containing also the VLAN and Overlay ID information) and an external IP header.

However this presents a challenge if data analysis of OTV packets is required for troubleshooting and/or monitoring purposes.

Packet analysis tools, such as Wireshark, attempt to decode packet data which follows the MPLS header by applying regular MPLS packet parsing rules. However, since it may not have information about the results of Control Word negotiation, which would be normally performed between MPLS L2VPN Head-end and Tail-end routers, packet analysis tools falls back to default parsing behaviour and applies it to packet data which follows MPLS header.

The following is a network diagram of a simple OTV network. Routers in Vlan 100 and Vlan 200 establish OSPF and EIGRP adjacencies between two DataCenters, DataCenter1 and DataCenter2, respectively. DataCenter Interconnect (DCI) is implemented with OTV tunnel between N7k switches, shown on the diagram as AED1 and AED2.

The challenge often seen in tunneling solutions is to verify whether a particular type of overlay packets (IGP, FHRP, etc.) makes it to certain points in underlay network. OSPF and EIGRP overlay traffic is used as an example.

There are multiple ways to perform a packet capture in the network. One option is to use Cisco Switched Port Analyzer (SPAN) feature, available on Cisco Catalyst and Cisco Nexus switching platforms.

As part of troubleshooting process, packet captures at multiple points may need to be performed. OTV Join interfaces and interfaces in the underlay network can be used as SPAN packet capture point.

Wireshark default parsing engine may mis-interpret first few bytes of an OTV-encapsulated overlay packets as if they are a part of Pseudowire Emulation Edge-to-Edge (PWE3) Control Word,which is typically used in MPLS L2VPNs over an MPLS packet switched network.

As a first step of decode process, display only OTV-encapsulated packets which carry content of OTV-extended vlan 100. Filter used is mpls.label == 132, which represents vlan 100.

By default Wireshark interprets the first four bytes of the content of MPLS L2VPN packets as Control Word. This needs to be corrected for OTV-encapsulated packets. To do this, right-click on MPLS label field of any of the packets, and chose Decode As... option. 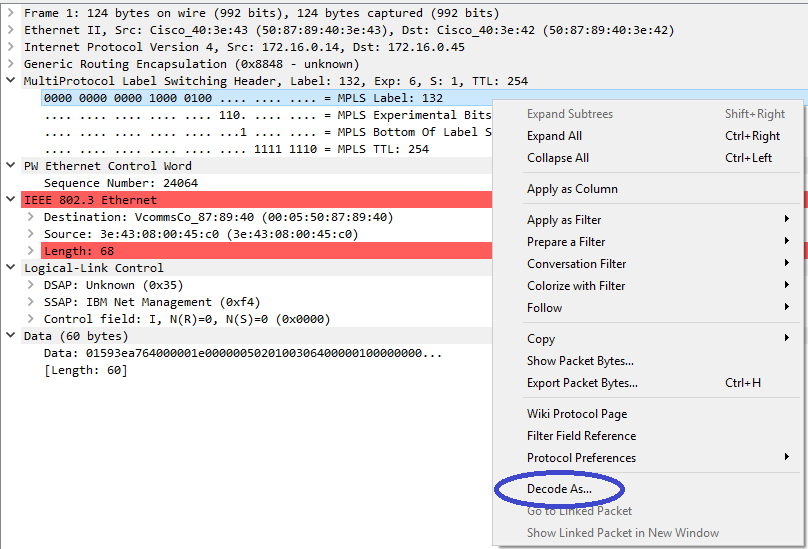 Right-click on MPLS label field and choose Decode As... option

The next step is to tell Wireshark that encapsulated content has no Control Word. 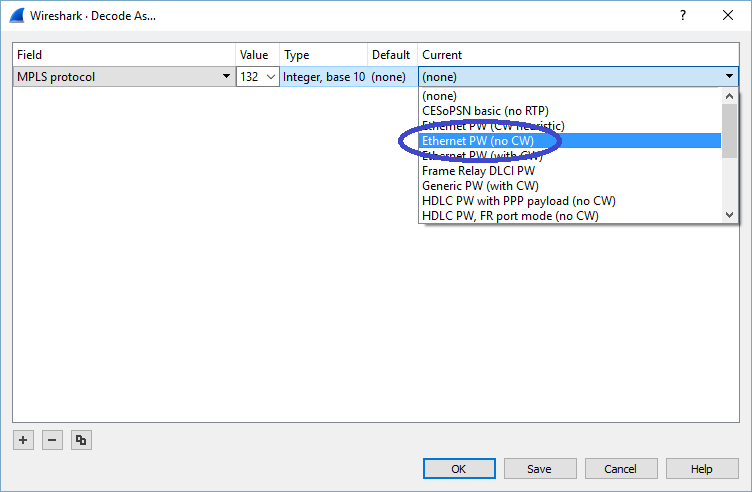 Once this change has been submitted by clicking OK button, Wireshark analysis tool will display content of OTV-encapsulated packets correctly. 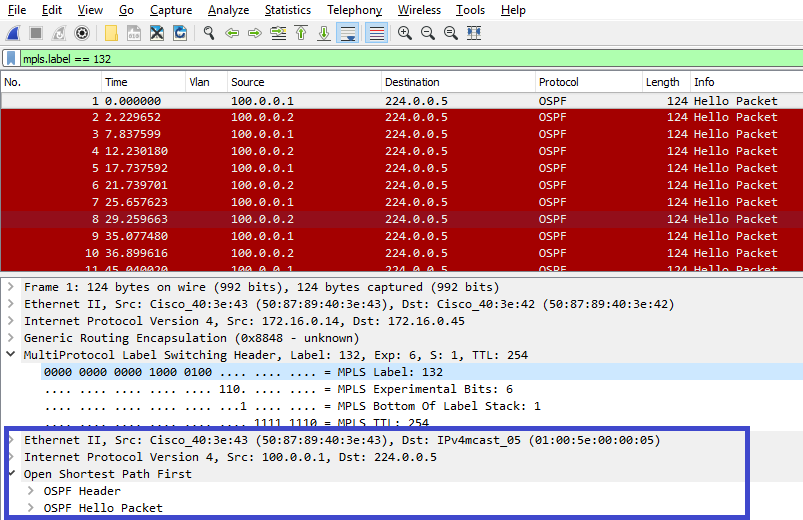 Above steps are applicable for any vlan extended over OTV. For example, using Wireshark filter to display only packets of vlan 200, we get the following output in analysis tool. 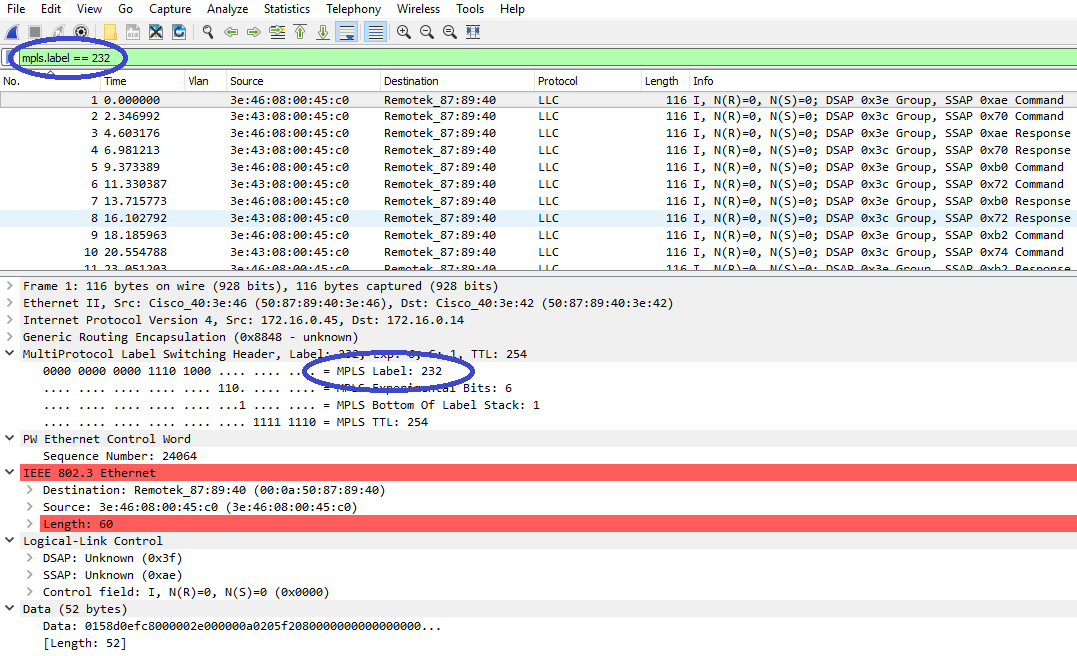 Once Wireshark is instructed not to interpret first few bytes of MPLS packet as PW Control Word, decode process can complete successfully. 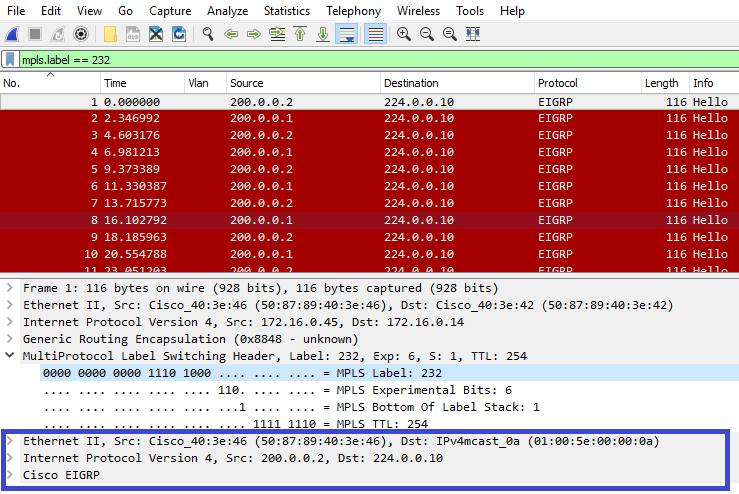 Use Editcap to Remove OTV Header

On Windows operating system, editcap.exe is installed by default in c:\Program Files\Wireshark> directory.

Run this tool with -C flag to remove OTV overhead and save the result in a .pcap file.

By removing the OTV header from captured  packets withEditcaptool, one loses Vlan information which is encoded as part of MPLS header, which is in turn a part of OTV shim. Remember to use 'mpls.label == <<vlan number extended over OTV> + 32>' Wireshark GUI filter before removing the OTV header with  Editcap tool, if analysis of traffic only of a particular Vlan is required.