This section provides brief descriptions of the pluggable transceivers that can be installed in the switch modules and supervisor engines. The following safety warnings apply:

The switch supports 10-GB X2 and 10-GB SFP+ transceivers. The following table lists the modules that the transceivers support and the links that provide transceiver specifications:

To determine if a specific 10-GB transceiver is compatible with the supported modules, see the 10-Gigabit Ethernet Transceiver Modules Compatibility Matrix document that is available on Cisco.com.

The following table lists the supported modules, applicable illustrations, and the specification tables for WDM transceivers.

This section provides brief descriptions of the module connectors that the switch supports.

The SC connector is used to connect fiber-optic module ports or transceivers with the external SMF or MMF network.

Always insert the network connector completely into the socket. A secure connection is especially important when you are establishing a connection between a module and a long-distance (1.24 miles) (2 km) network, or a module and a suspected highly attenuated network. If the link LED does not light up, try removing the network cable plug and reinserting it firmly into the module socket. It is possible that dirt or skin oils have accumulated on the plug faceplate (around the optical-fiber openings), generating significant attenuation and reducing the optical power levels below threshold levels so that a link cannot be established.

This section describes the cables supported on the switch.

Use only Cisco SFP modules on your Cisco device. Each SFP module has an internal serial EEPROM that is encoded with security information. This encoding provides a way for Cisco to identify and validate that the SFP module meets the requirements for the device.

For cabling specifications, see the Cisco SFP and SFP+ Transceiver Module Installation Notes. Each port must match the wave-length specifications on the other end of the cable, and the cable must not exceed the stipulated cable length. Copper 1000BASE-T SFP module transceivers use standard four twisted-pair, Category 5 cable at lengths up to 328 feet (100 meters).

The supervisor engine's front-panel console ports allow you to connect a terminal or modem to the console port.

Use the RJ-45-to-RJ-45 rollover cable and the RJ-45-to-DB-9 female DTE adapter (labeled "Terminal") to connect the console port to a PC running terminal emulation software.

DB-25 Adapter (To Connect to a Terminal)

Use the RJ-45-to-RJ-45 rollover cable and the RJ-45-to-DB-25 female DTE adapter (labeled "Terminal") to connect the console port to a terminal. 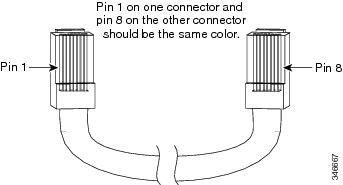 The following tables and figures describe the pinouts and schematics for cables that the switch supports. 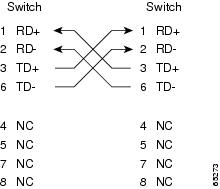 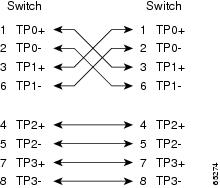 The accessory kit contains the cable and adapters that you will need to connect a console (an ASCII terminal or PC running terminal emulation software) or modem to the console port. The accessory kit includes these items:

When using the long-wavelength and long-haul (LX and LH) GBIC with 62.5-micron diameter multimode fiber (MMF), you must install a mode-conditioning patch cord (Cisco product number CAB-GELX-625 or equivalent) between the GBIC and the MMF cable on both the transmit and receive ends of the link.

To install the patch cord, perform these steps:

When an unconditioned laser source designed for operation on an SMF cable is directly coupled with an MMF cable, differential mode delay (DMD) might occur. DMD may degrade the modal bandwidth of the fiber-optic cable. This degradation causes a decrease in the link span (the distance between the transmitter and the receiver) that can be reliably supported.

The Gigabit Ethernet specification (IEEE 802.3z) outlines parameters for Ethernet communications at a gigabit-per-second rate. The specification offers a higher-speed version of Ethernet for backbone and server connectivity using existing deployed MMF cable by defining the use of laser-based optical components to propagate data over MMF cable.

Lasers function at the baud rates and longer distances required for Gigabit Ethernet. The 802.3z Gigabit Ethernet Task Force has identified the DMD condition that occurs with particular combinations of lasers and MMF cable. The results create an additional element of jitter that can limit the reach of Gigabit Ethernet over MMF cable.

With DMD, a single laser light pulse excites a few modes equally within an MMF cable. These modes, or light pathways, then follow two or more different paths. These paths might have different lengths and transmission delays as the light travels through the cable. With DMD, a distinct pulse propagating down the cable no longer remains a distinct pulse, or in extreme cases, might become two independent pulses. Strings of pulses may interfere with each other making it difficult to recover data.

DMD does not occur in all deployed fibers; it occurs with certain combinations of worst-case fibers and worst-case transceivers. Gigabit Ethernet experiences this problem because of its very high baud rate and its long MMF cable lengths. SMF cable and copper cable are not affected by DMD.

MMF cable has been tested for use only with LED sources. LEDs can create an overfilled launch condition within the fiber-optic cable. The overfilled launch condition describes the way LED transmitters couple light into the fiber-optic cable in a broad spread of modes. Similar to a light bulb radiating light into a dark room, the generated light that shines in multiple directions can overfill the existing cable space and excite a large number of modes. 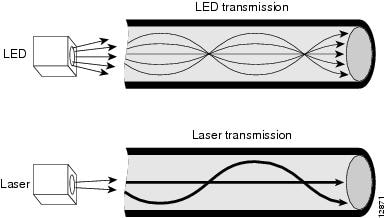 Lasers launch light in a more concentrated fashion. A laser transmitter couples light into only a fraction of the existing modes or optical pathways present in the fiber-optic cable. See Figure 1

The solution is to condition the laser light launched from the source (transmitter) so that it spreads the light evenly across the diameter of the fiber-optic cable making the launch look more like an LED source to the cable. The objective is to scramble the modes of light to distribute the power more equally in all the modes and prevent the light from being concentrated in just a few modes.

An unconditioned launch, in the worst case, might concentrate all of its light in the center of the fiber-optic cable, exiting only two or more modes equally.

A significant variation in the amount of DMD is produced from one MMF cable to the next. No reasonable test can be performed to survey an installed cable plant to assess the effect of DMD. Therefore, you must use the mode-conditioning patch cords for all uplink modules using MMF when the link span exceeds 984 feet (300 meters).

For link spans less than 984 feet (300 meters), you can omit the patch cord. We recommend that you do no use the LX and LH GBIC and MMF without the patch cord for very short link distances of 33 to 328 feet (10 to 100 meters) because it may result in an elevated BER.

Fiber-optic connectors differ from electrical or microwave connectors. In a fiber-optic system, light is transmitted through an extremely small fiber core. Because fiber cores are often 62.5 microns or less in diameter, and dust particles range from a tenth of a micron to several microns in diameter, dust and any contamination at the end of the fiber core can degrade the performance of the connector interface where the two cores meet. The connector must be precisely aligned, and the connector interface must be absolutely free of trapped foreign material.

Connector loss or insertion loss is a critical performance characteristic of a fiber-optic connector. Return loss is also an important factor. Return loss specifies the amount of reflected light; the lower the reflection, the better the connection. The best physical-contact connectors have return losses greater than -40 dB, although -20 to -30 dB is more common.

Before installing any type of cable or connector, use a lint-free alcohol pad from a cleaning kit to clean the ferrule, the protective white tube around the fiber, and the end-face surface of the fiber.

As a general rule, whenever there is a significant, unexplained loss of light, clean the connectors.

Connectors that are used inside the system are cleaned by the manufacturer and connected to the adapters in a proper manner. The operation of the system will be error free if the customer provides clean connectors on the application side and follows these guidelines:

How to Clean the Fiber-Optic Connectors

To clean optical connectors, use a CLETOP cassette cleaner (type A for SC connectors or type B for MT-RJ connectors) and follow the product directions.