Take note of the modules listed in the “Configuring Jumbo Frame Support” section that do not support jumbo frames.

The Layer 3 packet within the Layer 2 frame cannot be identified in tunnel traffic.

Because the Layer 3 addresses cannot be identified within the packet, tunnel traffic cannot be routed.

The switch can provide only MAC-layer filtering for tunnel traffic (VLAN IDs and source and destination MAC addresses).

The switch can provide only MAC-layer access control and QoS for tunnel traffic.

Devices connected by an asymmetrical link

Devices communicating through a tunnel

If this option is enabled on one switch and disabled on another switch, all traffic is dropped; all customer switches must have this option configured the same on each switch.

A port configured to support 802.1Q tunneling is called a tunnel port. When you configure tunneling, you assign a tunnel port to a VLAN that you dedicate to tunneling, which then becomes a tunnel VLAN. To keep customer traffic segregated, each customer requires a separate tunnel VLAN, but that one tunnel VLAN supports all of the customer’s VLANs.

802.1Q tunneling is not restricted to point-to-point tunnel configurations. Any tunnel port in a tunnel VLAN is a tunnel entry and exit point. An 802.1Q tunnel can have as many tunnel ports as are needed to connect customer switches. 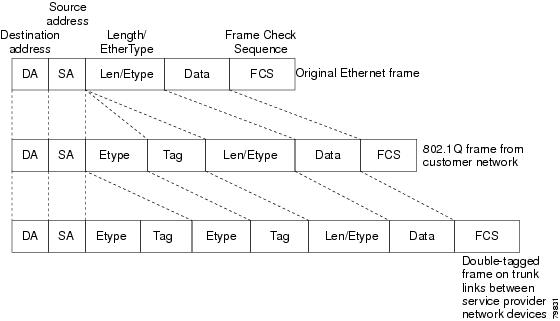 A VLAN carrying tunnel traffic is an 802.1Q tunnel. The tunnel ports in the VLAN are the tunnel’s ingress and egress points.

How to Configure 802.1Q Tunneling

Ensure that only the appropriate tunnel ports are in any VLAN used for tunneling and that one VLAN is used for each tunnel. Incorrect assignment of tunnel ports to VLANs can forward traffic inappropriately.

To configure 802.1Q tunneling on a port, perform this task:

This example shows how to configure tunneling on port 4/1 and verify the configuration:

To configure the switch to tag traffic in the native VLAN globally, perform this task:

This example shows how to configure the switch to tag native VLAN traffic and verify the configuration:

To configure a port not to tag traffic in the native VLAN, perform this task:

This example shows how to configure Gigabit Ethernet port 1/4 to tag traffic in the native VLAN and verify the configuration: