For information about these commands, see these publications:

MPLS uses label switching to forward packets over Ethernet. Labels are assigned to packets based on groupings or forwarding equivalence classes (FECs). The label is added between the Layer 2 and the Layer 3 header.

In an MPLS network, the label edge router (LER) performs a label lookup of the incoming label, swaps the incoming label with an outgoing label, and sends the packet to the next hop at the label switch router (LSR). Labels are imposed (pushed) on packets only at the ingress edge of the MPLS network and are removed (popped) at the egress edge. The core network LSRs (provider, or P routers) read the labels, apply the appropriate services, and forward the packets based on the labels.

Figure 37-1 shows an MPLS network of a service provider that connects two sites of a customer network.

The route processor (RP) performs Layer 3 control-plane functions, including address resolution and routing protocols. The RP processes information from the Routing and Label Distribution Protocols and builds the IP forwarding (FIB) table and the label forwarding (LFIB) table. The RP distributes the information in both tables to the PFC and DFCs.

The PFC and DFCs receive the information and creates its own copies of the FIB and LFIB tables. Together, these tables comprise the FIB TCAM. The PFC and DFCs look up incoming IP packets and labeled packets against the FIB TCAM table. The lookup result is the pointer to a particular adjacency entry. It is the adjacency entry that contains appropriate information for label pushing (for IP to MPLS path), label swapping (for MPLS to MPLS path), label popping (for MPLS to IP path), and encapsulation. 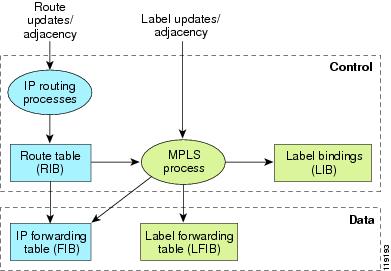 At the ingress to the MPLS network, the PFC examines the IP packets and performs a route lookup in the FIB TCAM. The lookup result is the pointer to a particular adjacency entry. The adjacency entry contains the appropriate information for label pushing (for IP to MPLS path) and encapsulation. The PFC generates a result containing the imposition label(s) needed to switch the MPLS packet.

At the core of an MPLS network, the PFC uses the topmost label to perform a lookup in the FIB TCAM. The successful lookup points to an adjacency that swaps the top label in the packet with a new label as advertised by the downstream label switch router (LSR). If the router is the penultimate hop LSR router (the upstream LSR next to the egress LER), the adjacency instructs the PFCBXL to pop the topmost label, resulting in either an MPLS packet with the remaining label for any VPN or AToM use or a native IP packet.

At the egress of the MPLS network there are several possibilities.

For a native IP packet (when the penultimate router has popped the label), the PFC performs a route lookup in the FIB TCAM.

For the case of a packet with an IGP label and a VPN label, when there is no penultimate hop popping (PHP), the packet carries the explicit-null label on top of the VPN label. The PFC looks up the top label in the FIB TCAM and recirculates the packet. Then the PFC handles the remaining label as described in the preceding paragraph, depending on whether it is an aggregate or nonaggregate label.

Packets with the explicit-null label for the cases of EoMPLS, MPLS, and MPLS VPN an MPLS are handled the same way.

There are two types of VPN labels: aggregate labels for directly connected network or aggregate routes, and nonaggregate labels. Packets carrying aggregate labels require a second lookup based on the IP header after popping the aggregate label. The VPN information (VPN-IPv4 address, extended community, and label) is distributed through the Multiprotocol-Border Gateway Protocol (MP-BGP).

In certain cases, the PFC provides the capability to recirculate the packets. Recirculation can be used to perform additional lookups in the ACL or QoS TCAMs, the NetFlow table, or the FIB TCAM table. Recirculation is necessary in these situations:

Packet recirculation occurs only on a particular packet flow; other packet flows are not affected. The rewrite of the packet occurs on the modules; the packets are then forwarded back to the PFC for additional processing.

The following features are supported in hardware:

With the Uniform mode, the TTL is taken from the IP TTL; with the Pipe mode, a value of 255, taken from the hardware register, is used for the outgoing label.

See these publications for more information:

How to Configure MPLS Features

Use these publications to configure MPLS:

A User Network Interface (UNI) is the point where the customer edge (CE) equipment connects to the ingress PE and an attachment VLAN is a VLAN on a UNI port.

The MUX-UNI support on LAN cards feature provides the ability to partition a physical port on an attachment VLAN to provide multiple Layer 2 and Layer 3 services over a single UNI.

To configure MUX-UNI support on LAN cards, perform this task on the provider edge (PE) routers.

This example shows a physical trunk port used as UNI:

This example shows a Layer 2 port channel used as UNI:

The following is an example of a basic MPLS configuration: