STP PortFast causes a Layer 2 LAN port configured as an access port to enter the forwarding state immediately, bypassing the listening and learning states. You can use PortFast on Layer 2 access ports connected to a single workstation or server to allow those devices to connect to the network immediately, instead of waiting for STP to converge. Interfaces connected to a single workstation or server should not receive bridge protocol data units (BPDUs). When configured for PortFast, a port is still running the spanning tree protocol. A PortFast enabled port can immediately transition to the blocking state if necessary (this could happen on receipt of a superior BPDU). PortFast can be enabled on trunk ports. PortFast can have an operational value that is different from the configured value.

Configure STP BPDU Guard along with STP PortFast to shut down STP PortFast-enabled ports if they receive a BPDU.

To configure the default PortFast state, perform this task:

The default spanning tree port type is normal, meaning only that its topology is not specified.

This example shows how to configure the default switch access port state to be edge:

Enabling PortFast on a Layer 2 Port

Enter the spanning-tree portfast edge [ trunk] command only on ports that are connected to end host devices that terminate VLANs and from which the port should never receive STP BPDUs, such as:
—Workstations.
—Servers.
—Ports on routers that are not configured to support bridging.

To enable PortFast on a Layer 2 access port, perform this task:

To enable PortFast on a Layer 2 network port, perform this task:

With Bridge Assurance enabled, BPDUs are sent out on all operational network ports, including alternate and backup ports, for each hello time period. If the port does not receive a BPDU for a specified period, the port moves into an inconsistent state (blocking). and is not used in the root port calculation. Once that port receives a BPDU, it resumes the normal spanning tree transitions.

Figure 32-1 shows a normal STP topology, and Figure 32-2 demonstrates a potential network problem when the device fails and you are not running Bridge Assurance. 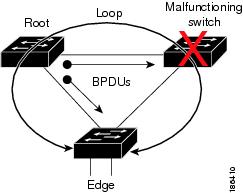 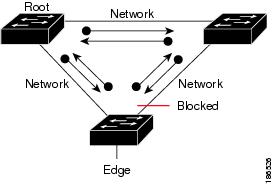 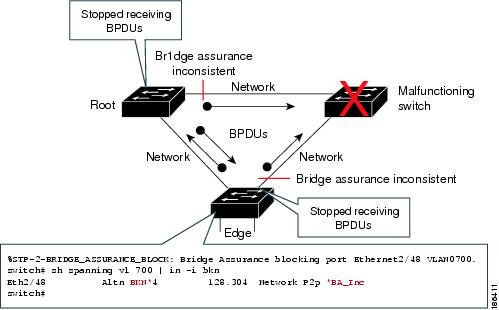 This example shows how to enable PortFast Bridge Assurance on all network ports on the switch, and how to configure a network port:

When enabled globally, BPDU Guard applies to all interfaces that are in an operational PortFast (edge) state.

Enabling BPDU Guard on a Port

To enable BPDU Guard on a port, perform this task:

PortFast edge BPDU filtering allows the administrator to prevent the system from sending or even receiving BPDUs on specified ports.

Explicitly configuring PortFast edge BPDU filtering on a port that is not connected to a host can result in bridging loops, as the port will ignore any BPDU it receives and will go to a forwarding state.

BPDU filtering is set to default on each edge port. This example shows how to enable PortFast edge BPDU filtering on the port and verify the configuration in PVST+ mode:

To enable or disable PortFast edge BPDU filtering on a nontrunking port, perform this task:

This example shows how to enable PortFast edge BPDU filtering on a nontrunking port:

UplinkFast is most useful in wiring-closet switches. This feature may not be useful for other types of applications. 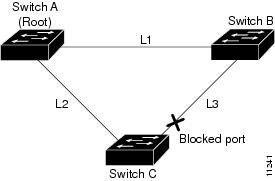 If Switch C detects a link failure on the currently active link L2 on the root port (a direct link failure), UplinkFast unblocks the blocked port on Switch C and transitions it to the forwarding state without going through the listening and learning states, as shown in Figure 32-6. This switchover takes approximately one to five seconds. 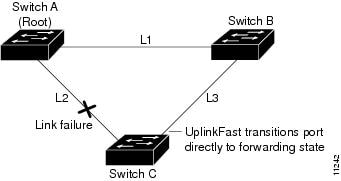 When you enable UplinkFast, it affects all VLANs on the switch. You cannot configure UplinkFast on an individual VLAN.

To enable UplinkFast, perform this task:

This example shows how to enable UplinkFast:

This example shows how to enable UplinkFast with an update rate of 400 packets per second:

This example shows how to verify that UplinkFast is enabled:

If link L1 fails, Switch C cannot detect this failure because it is not connected directly to link L1. However, because Switch B is directly connected to the root bridge over L1, it detects the failure and elects itself the root and begins sending BPDUs to Switch C indicating itself as the root. When Switch C receives the inferior BPDUs from Switch B, Switch C infers that an indirect failure has occurred. At that point, BackboneFast allows the blocked port on Switch C to move immediately to the listening state without waiting for the maximum aging time for the port to expire. BackboneFast then transitions the Layer 2 LAN interface on Switch C to the forwarding state, providing a path from Switch B to Switch A. This switchover takes approximately 30 seconds, twice the Forward Delay time if the default Forward Delay time of 15 seconds is set. Figure 32-8 shows how BackboneFast reconfigures the topology to account for the failure of link L1. 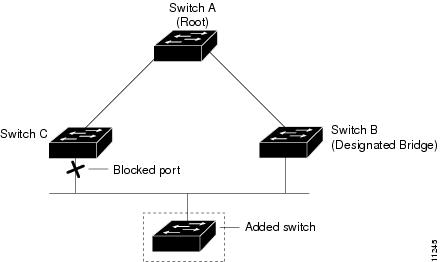 To enable BackboneFast, perform this task:

This example shows how to enable BackboneFast:

This example shows how to verify that BackboneFast is enabled:

In response to misconfiguration detected on the other device, EtherChannel guard puts interfaces on the switch into the errdisabled state.

This example shows how to enable EtherChannel guard:

To display the interfaces that are in the errdisable state, enter the show interface status err-disable command.

After the misconfiguration has been cleared, interfaces in the errdisable state might automatically recover. To manually return a port to service, enter a shutdown and then a no shutdown command for the interface.

The STP root guard feature prevents a port from becoming root port or blocked port. If a port configured for root guard receives a superior BPDU, the port immediately goes to the root-inconsistent (blocked) state.

To display ports that are in the root-inconsistent state, enter the show spanning-tree inconsistentports command.

Loop guard helps prevent bridging loops that could occur because of a unidirectional link failure on a point-to-point link. When enabled globally, the loop guard applies to all point-to-point ports on the system. Loop guard detects root ports and blocked ports and ensures that they keep receiving BPDUs from their designated port on the segment. If a loop guard enabled root or blocked port stop a receiving BPDUs from its designated port, it transitions to the loop-inconsistent blocking state, assuming there is a physical link error on this port. The port recovers from this loop-inconsistent state as soon as it receives a BPDU.

If you enable loop guard on a channel and the first link becomes unidirectional, loop guard blocks the entire channel until the affected port is removed from the channel. Figure 32-10 shows loop guard in a triangle switch configuration. 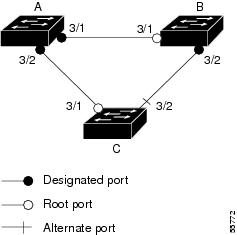 Loop guard interacts with other features as follows:

These caveats apply to loop guard:

Spanning tree always chooses the first operational port in the channel to send the BPDUs. If that link becomes unidirectional, loop guard blocks the channel, even if other links in the channel are functioning properly.

If a set of ports that are already blocked by loop guard are grouped together to form a channel, spanning tree loses all the state information for those ports and the new channel port may obtain the forwarding state with a designated role.

If a channel is blocked by loop guard and the channel breaks, spanning tree loses all the state information. The individual physical ports may obtain the forwarding state with the designated role, even if one or more of the links that formed the channel are unidirectional.

Note You can enable UniDirectional Link Detection (UDLD) to help isolate the link failure. A loop may occur until UDLD detects the failure, but loop guard will not be able to detect it.

To enable loop guard globally on the switch, perform this task:

This example shows how to enable loop guard globally:

To enable loop guard on a port, perform this task:

This example shows how to enable loop guard:

MST interoperates with Rapid PVST+ with no need for user configuration. The PVST simulation feature enables this seamless interoperability.

PVST simulation is enabled by default when you enable MST. That is, by default, all interfaces on the device interoperate between MST and Rapid PVST+.

You may want to control the connection between MST and Rapid PVST+ to protect against accidentally connecting an MST-enabled port to a port enabled to run Rapid PVST+. Because Rapid PVST+ is the default STP mode, you may encounter many Rapid PVST+ connections.

Disabling Rapid PVST+ simulation, which can be done per port or globally for the entire device, moves the MST-enabled port to the PVST peer inconsistent (blocking) state once it detects it is connected to a Rapid PVST+-enabled port. This port remains in the inconsistent state until the port stops receiving Shared Spanning Tree Protocol (SSTP) BPDUs, and then the port resumes the normal STP transition process.

We recommend that you put the root bridge for all STP instances in the MST region.

PVST simulation is enabled by default so that all interfaces on the device interoperate between MST and Rapid PVST+.

To prevent an accidental connection to a device that does not run MST as the default STP mode, you can disable PVST simulation. If you disable PVST simulation, the MST-enabled port moves to the blocking state once it detects it is connected to a Rapid PVST+-enabled port. This port remains in the inconsistent state until the port stops receiving BPDUs, and then the port resumes the normal STP transition process.

To enable or disable PVST simulation globally, enter the command using the global keyword, as shown in the following task:

To override the global PVST simulation setting for a port, enter the command in the interface command mode, as shown in the following task:

This example shows how to prevent the switch from automatically interoperating with a connecting device that is running Rapid PVST+:

This example shows how to prevent a port from automatically interoperating with a connecting device that is running Rapid PVST+:

Examples of the show spanning-tree Commands

This example displays the spanning-tree status with Bridge Assurance enabled but in the inconsistent state:

The following inconsistency messages can be appended to the Type field:

Possible states for the Bridge Assurance field are as follows:

This example shows the spanning tree summary when PVST simulation is disabled in any STP mode:

Possible states for the PVST Simulation Default field are as follows:

This example shows the spanning-tree configuration details of an edge port:

This example shows the spanning-tree configuration details of a trunk port:

This example shows the spanning-tree configuration details of an edge port when a dispute condition has been detected:

This example shows the spanning tree portfast edge interface operational state for all the instances: