Although IEEE 802.1Q tunneling works well for Layer 2 packet switching, there are incompatibilities between some Layer 2 features and Layer 3 switching.

To configure Layer 2 point-to-point tunneling to facilitate the automatic creation of EtherChannels, you need to configure both the SP (service-provider) edge switch and the customer switch.

Virtual private networks (VPNs) provide enterprise-scale connectivity on a shared infrastructure, often Ethernet-based, with the same security, prioritization, reliability, and manageability requirements of private networks. Tunneling is a feature designed for service providers who carry traffic of multiple customers across their networks and are required to maintain the VLAN and Layer 2 protocol configurations of each customer without impacting the traffic of other customers.

Business customers of service providers often have specific requirements for VLAN IDs and the number of VLANs to be supported. The VLAN ranges required by different customers in the same service-provider network might overlap, and traffic of customers through the infrastructure might be mixed. Assigning a unique range of VLAN IDs to each customer would restrict customer configurations and could easily exceed the VLAN limit (4096) of the IEEE 802.1Q specification.

Using the IEEE 802.1Q tunneling feature, service providers can use a single VLAN to support customers who have multiple VLANs. Customer VLAN IDs are preserved, and traffic from different customers is segregated within the service-provider network, even when they appear to be in the same VLAN. Using IEEE 802.1Q tunneling expands VLAN space by using a VLAN-in-VLAN hierarchy and retagging the tagged packets. A port configured to support IEEE 802.1Q tunneling is called a tunnel port. When you configure tunneling, you assign a tunnel port to a VLAN ID that is dedicated to tunneling. Each customer requires a separate service-provider VLAN ID, but that VLAN ID supports all of the customer’s VLANs.

Customer traffic tagged in the normal way with appropriate VLAN IDs comes from an IEEE 802.1Q trunk port on the customer device and into a tunnel port on the service-provider edge switch. The link between the customer device and the edge switch is asymmetric because one end is configured as an IEEE 802.1Q trunk port, and the other end is configured as a tunnel port. You assign the tunnel port interface to an access VLAN ID that is unique to each customer. 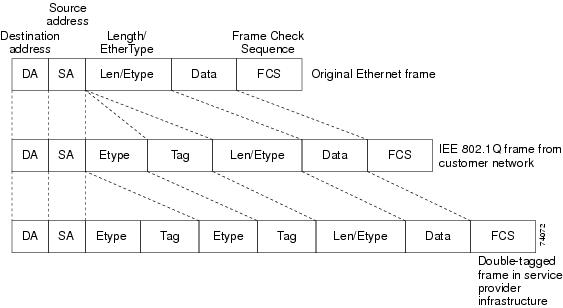 When the packet enters the trunk port of the service-provider egress switch, the outer tag is again stripped as the switch internally processes the packet. However, the metro tag is not added when the packet is sent out the tunnel port on the edge switch into the customer network. The packet is sent as a normal IEEE 802.1Q-tagged frame to preserve the original VLAN numbers in the customer network.

At the outbound tunnel port, the original VLAN numbers on the customer’s network are recovered. It is possible to have multiple levels of tunneling and tagging, but the switch supports only one level in this release.

If traffic coming from a customer network is not tagged (native VLAN frames), these packets are bridged or routed as normal packets. All packets entering the service-provider network through a tunnel port on an edge switch are treated as untagged packets, whether they are untagged or already tagged with IEEE 802.1Q headers. The packets are encapsulated with the metro tag VLAN ID (set to the access VLAN of the tunnel port) when they are sent through the service-provider network on an IEEE 802.1Q trunk port. The priority field on the metro tag is set to the interface class of service (CoS) priority configured on the tunnel port. (The default is zero if none is configured.)

On switches, because 802.1Q tunneling is configured on a per-port basis, it does not matter whether the switch is a standalone switch or a stack member. All configuration is done on the stack master.

Assign tunnel ports only to VLANs that are used for tunneling.

Configuration requirements for native VLANs and for and maximum transmission units (MTUs) are explained in these next sections. 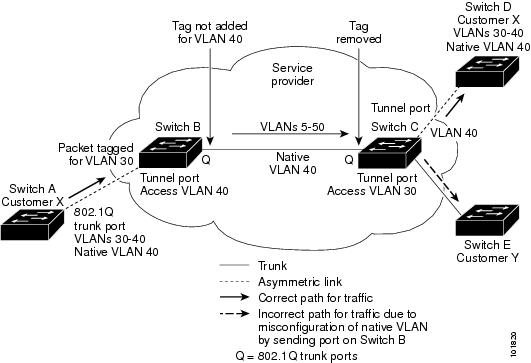 The default system MTU for traffic on the switch is 1500 bytes. You can configure Fast Ethernet ports on the switch members in the mixed hardware switch stack to support frames larger than 1500 bytes by using the system mtu global configuration command.

You can configure 10-Gigabit and Gigabit Ethernet ports to support frames larger than 1500 bytes by using the system mtu jumbo global configuration command.

For example, the switch supports a maximum frame size of 1496 bytes with one of these configurations:

Customers at different sites connected across a service-provider network need to use various Layer 2 protocols to scale their topologies to include all remote sites, as well as the local sites. STP must run properly, and every VLAN should build a proper spanning tree that includes the local site and all remote sites across the service-provider network. Cisco Discovery Protocol (CDP) must discover neighboring Cisco devices from local and remote sites. VLAN Trunking Protocol (VTP) must provide consistent VLAN configuration throughout all sites in the customer network.

For example, in the following figure (Layer 2 Protocol Tunneling), Customer X has four switches in the same VLAN, that are connected through the service-provider network. If the network does not tunnel PDUs, switches on the far ends of the network cannot properly run STP, CDP, and VTP. For example, STP for a VLAN on a switch in Customer X, Site 1, will build a spanning tree on theswitches at that site without considering convergence parameters based on Customer X’s switch in Site 2. This could result in the topology shown in the Layer 2 Network Topology without Proper Convergence figure. 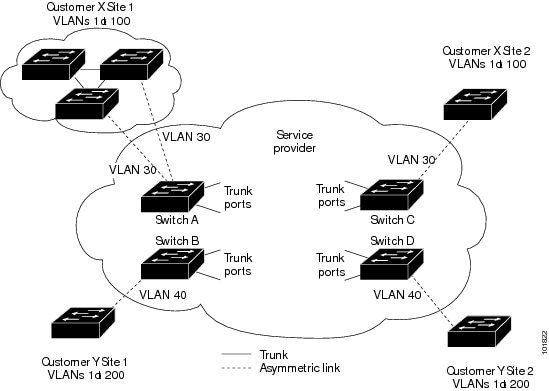 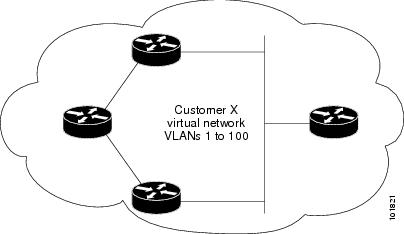 For example, in the following figure (Layer 2 Protocol Tunneling for EtherChannels), Customer A has two switches in the same VLAN that are connected through the SP network. When the network tunnels PDUs, switches on the far ends of the network can negotiate the automatic creation of EtherChannels without needing dedicated lines.

When the Layer 2 PDUs that entered the service-provider inbound edge switch through a Layer 2 protocol-enabled port exit through the trunk port into the service-provider network, the switch overwrites the customer PDU-destination MAC address with a well-known Cisco proprietary multicast address (01-00-0c-cd-cd-d0). If IEEE 802.1Q tunneling is enabled, packets are also double-tagged; the outer tag is the customer metro tag, and the inner tag is the customer’s VLAN tag. The core switches ignore the inner tags and forward the packet to all trunk ports in the same metro VLAN. The edge switches on the outbound side restore the proper Layer 2 protocol and MAC address information and forward the packets to all tunnel or access ports in the same metro VLAN. Therefore, the Layer 2 PDUs remain intact and are delivered across the service-provider infrastructure to the other side of the customer network.

See the Layer 2 Protocol Tunneling figure in Layer 2 Protocol Tunneling Overview, with Customer X and Customer Y in access VLANs 30 and 40, respectively. Asymmetric links connect the customers in Site 1 to edge switches in the service-provider network. The Layer 2 PDUs (for example, BPDUs) coming into Switch B from Customer Y in Site 1 are forwarded to the infrastructure as double-tagged packets with the well-known MAC address as the destination MAC address. These double-tagged packets have the metro VLAN tag of 40, as well as an inner VLAN tag (for example, VLAN 100). When the double-tagged packets enter Switch D, the outer VLAN tag 40 is removed, the well-known MAC address is replaced with the respective Layer 2 protocol MAC address, and the packet is sent to Customer Y on Site 2 as a single-tagged frame in VLAN 100.

You can also enable Layer 2 protocol tunneling on access ports on the edge switch connected to access or trunk ports on the customer switch. In this case, the encapsulation and decapsulation process is the same as described in the previous paragraph, except that the packets are not double-tagged in the service-provider network. The single tag is the customer-specific access VLAN tag.

How to Configure Tunneling

Before You BeginFor EtherChannels, you need to configure both the SP (service-provider) edge switches and the customer switches for Layer 2 protocol tunneling.
SUMMARY STEPS

For EtherChannels, you need to configure both the SP edge switch and the customer switches for Layer 2 protocol tunneling.

The following example shows how to configure an interface as a tunnel port, enable tagging of native VLAN packets, and verify the configuration. In this configuration, the VLAN ID for the customer connected to Gigabit Ethernet interface 7 on stack member 1 is VLAN 22.

The following example shows how to configure Layer 2 protocol tunneling for CDP, STP, and VTP and to verify the configuration.

This example shows how to configure the customer switch at Site 1. Fast Ethernet interfaces 1, 2, 3, and 4 are set for IEEE 802.1Q trunking, UDLD is enabled, EtherChannel group 1 is enabled, and the port channel is shut down and then enabled to activate the EtherChannel configuration.

You can configure the following:

Feature History and Information for Tunneling